Special Ks, Dance-offs and a feminine touch – the Week of Hockey Stars

Astana, Kazakhstan, was the center of the KHL for the week as it hosted an All-Star spectacular. With more than 10,000 fans coming to the final showcase, and big crowds throughout the week, it was a special event for all concerned. Let’s look back at some of the highlights.

The brightest stars in the KHL Galaxy. Finest photos from the Astana

The main event – the inter-divisional contest – saw a repeat of last year’s final. But Team Chernyshev could not repeat its victory in Ufa, losing out 5-4 to Team Tarasov. Two goals apiece for Kagarlitsky and Kovalenko, plus one for Kirill Kaprizov, proved that Tarasov’s K-force had the Killer Kombinations in Kazakhstan. Maybe that’s why we call it the ‘K’HL?

A year after Andrei Altybarmakyan delivered a game-winning goal after being called up from the Youth Hockey League for the big occasion, Nikolai Kovalenko of Loko was the man to make the big impact from the juniors. 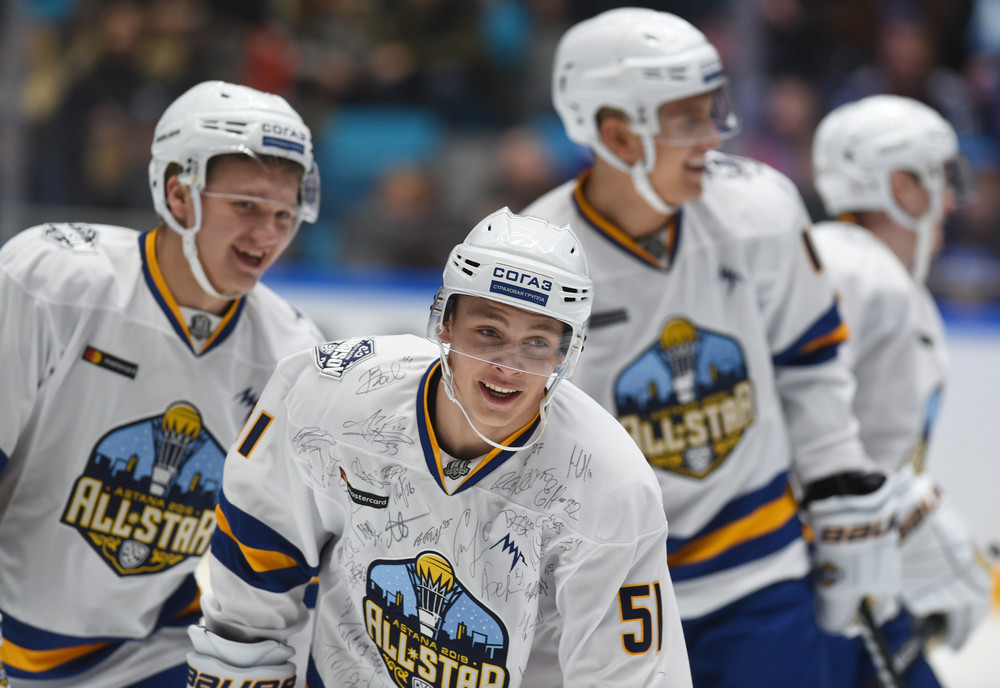 The bronze-medal game went to Team Kharlamov after an 8-4 victory over Team Bobrov. Not surprisingly, perhaps, all-time All-Star top scorer Sergei Mozyakin was among the goals again, with two more in that game.

One of the unique features of this year’s All-Star action was the inclusion of four women as assistant coaches for the teams. A quartet of respected broadcasters, Natalia Klark (Bobrov), Sonia Gudim (Tarasov), Daria Mironova (Chernyshev) and Maria Bass (Kharlamov) struck a blow for equality behind the benches – and had a blast! 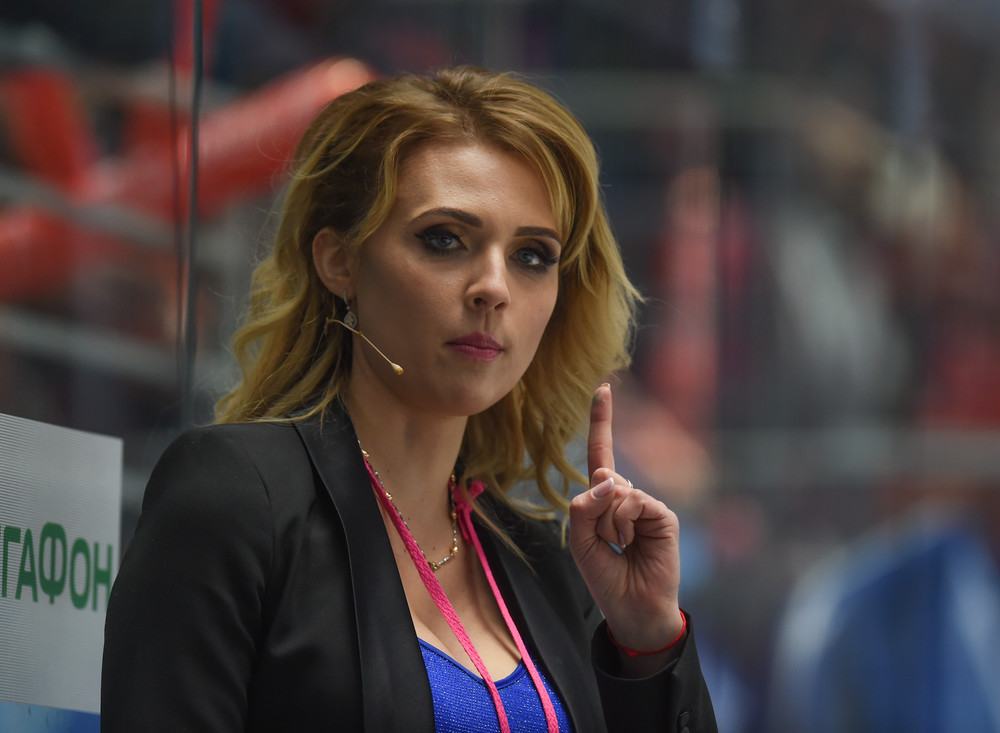 Gudim collected a gold medal alongside CSKA’s Igor Nikitin, and was thrilled with the whole experience: “Every time I went to the bench, I couldn’t quite believe this was happening to me,” she told KHL.ru. “Even after the Master Show on Saturday, I couldn’t really imagine it. But suddenly I was there, I was a coach. It was just unbelievable.”

Sonia Gudim: "Women love hockey because it has passion, energy and emotion! 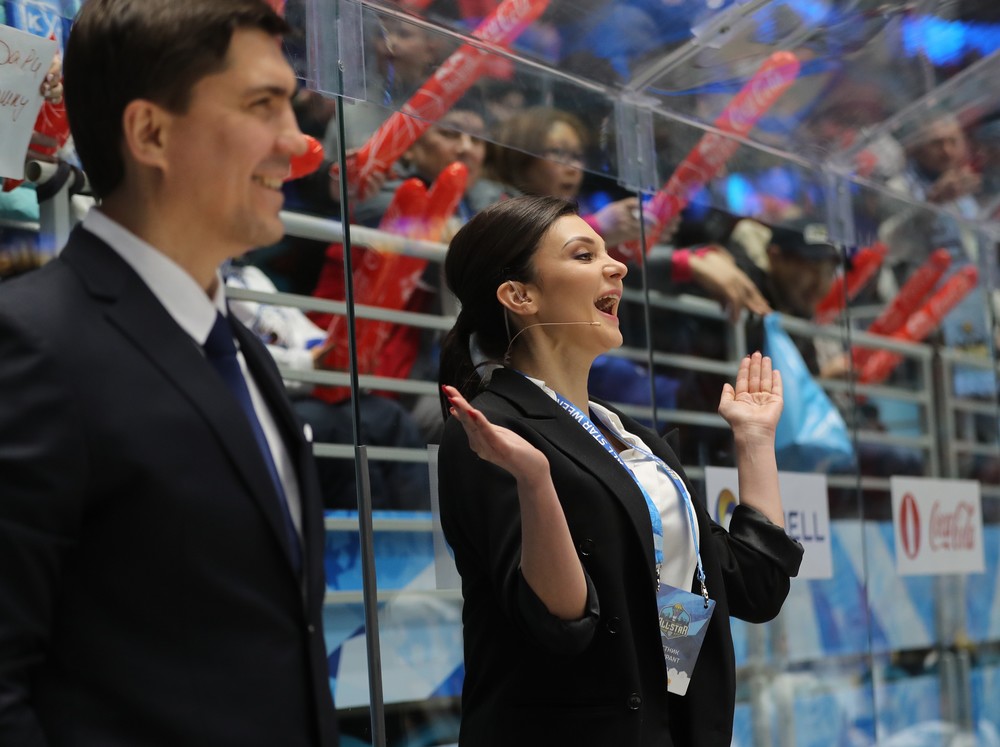 For Bass, working with the supposedly volatile Andrei Nazarov was no bother. “He was great, very professional and so laid back. Yes, really laid back! We had a happy, friendly locker room and we created a lovely little atmosphere there.” 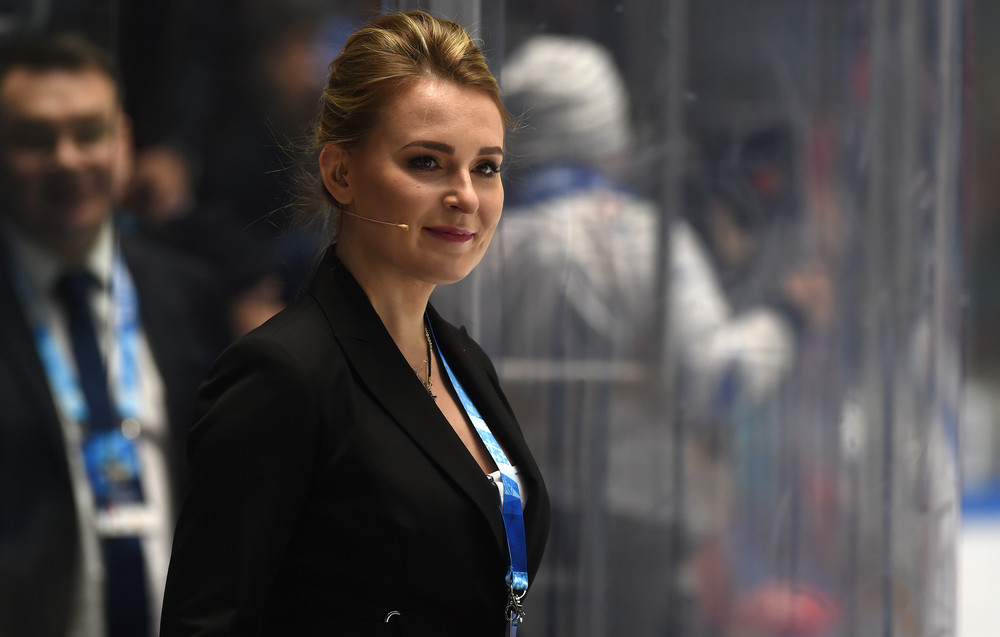 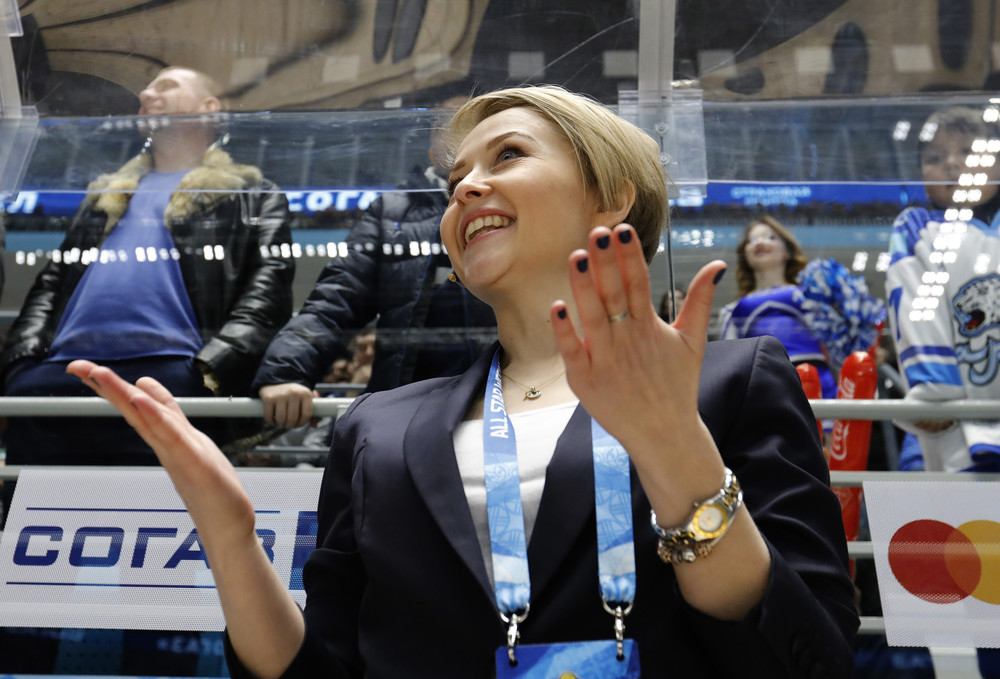 You’ve seen Superman, but Saturday introduced Sochi-man to the world. Pavel Padakin, star of the Black Sea team, donned the cape and tights in honor of his city.

“I want to be clear about this, guys,” he told the press. “This is Sochi-man, not Superman. Two completely different heroes.” While finding an outfit was easy enough as Russia’s New Year festivities continued, squeezing into it with all his hockey gear on meant there were some very tight tights involved. “I found it and ordered it right away, but it turned out to be a bit of a squeeze.” 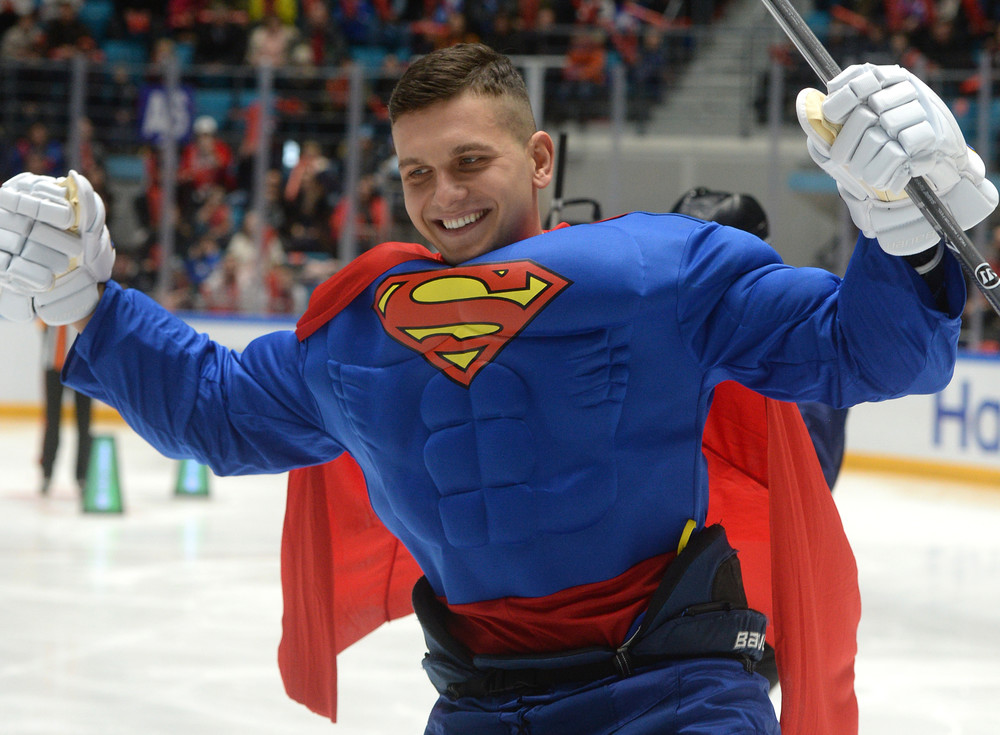 For Dmitry Kagarlitsky (Severstal, Tarasov), Russian TV commentator Dmitry Guberniev – the voice of international sports coverage in Russia – was the inspiration at the Master-Show. “I fancied having a go at commentating, and decided to channel Guberniev,” the forward said. “I think it worked. I shouted like Guberniev, and Nikita Nesterov won his event!” Kagarlitsky wasn’t the only player to join the media – Avtomobilist’s Nikita Tryamkin took over the camera on the Kharlamov bench, while Sonia Gudim reckoned that Nesterov might have the best prospects of a future as a vlogger. 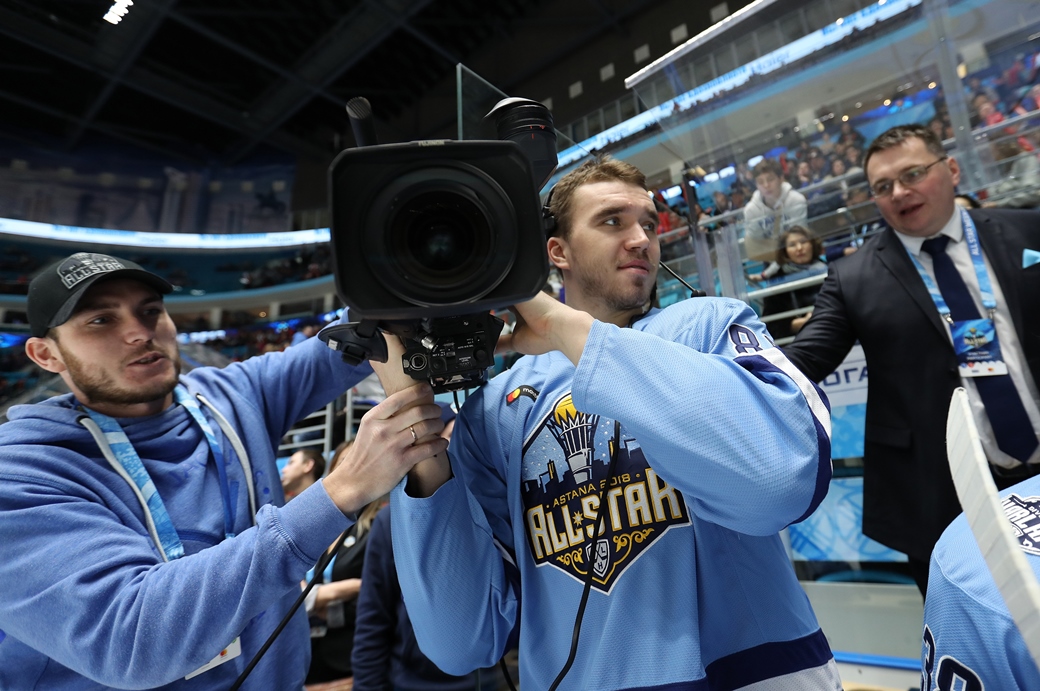 All teams was announced as part of KHL Galaxy

The promise of youth

The week’s action in Astana was not all about the KHL. Thursday saw the Youth Hockey League play its annual Challenge Cup game, pitching the Western Conference against the East. And, just like last year, the best players would get a chance to join up with the big league and play in Sunday’s showdown.

The game went to the west this time. The team won 7-3 in Astana and now has seven victories from nine editions of the game. The fab four who made it into the weekend’s big show were Nikolai Kovalenko (Loko), Igor Geraskin (Almaz) and German Voloshin (Amur Tigers) from the West, plus Yegor Korobkin (Steel Foxes) from the East.

Making a song and dance about it

It wasn’t just behind the bench that women’s hockey made an impact in Astana. The best players of Russia’s Women’s Hockey League also played their All-Star Game here – and the Eastern teams came out on top.

Olga Sosina, of Adigel Ufa and Team East, got the winning goal in the game – and then came the dance-off. You can pick your own winner from that by checking out the videos.

IIHF President Rene Fasel was the guest of honor in Astana, and he was delighted to be part of a big event in Kazakhstan – despite the freezing winter weather!

“I saw lots of happy fans, and Astana made all that happen,” he said. “The players enjoyed themselves and I was delighted to be here. The weather was an interesting experience as well – I’m not used to -29C!” 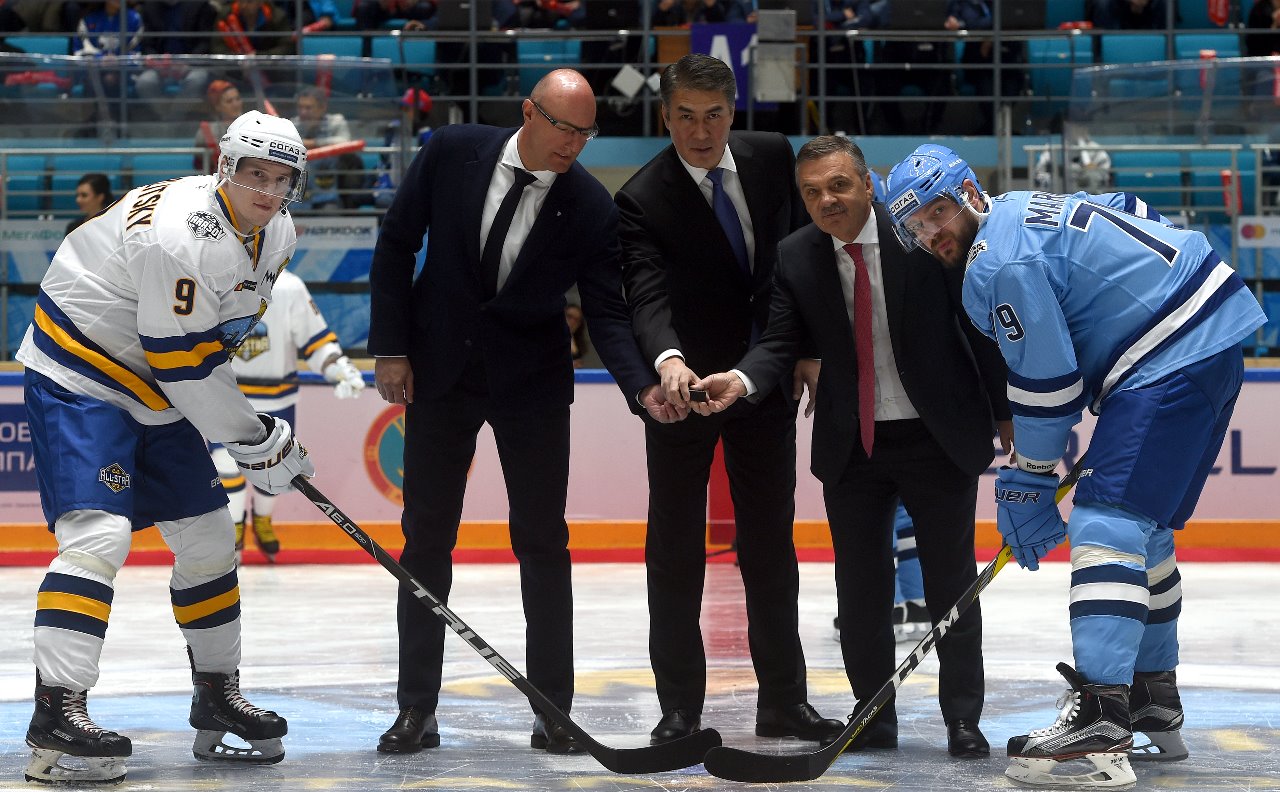 Aset Isekeshev, mayor of Astana, was delighted to celebrate the 20th anniversary of his city becoming Kazakhstan’s capital by marking the 10th season of the KHL. “Barys has been a big contributor to the league from day one and we are creating a real hockey movement here,” he said. “Lots of people have started following the game and events like this provide the impulse to develop even further.”