Best of times, worst of times – the KHL Week in Review

Playoffs are all about contrasting fortunes. For defending champion Ak Bars, life on the wrong end of a first-round sweep is a low-point in the KHL era. For Avtomobilist and Sochi, the current postseason is already better than ever – without even getting through the first round.

Ak Bars was the first team to crash out of this year’s playoffs, suffering a series sweep at the hands of Avangard. It was the first time the Kazan club had suffered a first-round sweep in the KHL era, and only the second time it had failed to progress through at least one stage of postseason. The previous first-round exit came in 2014, when current head coach Zinetula Bilyaletdinov was back at the club in an advisory capacity following the end of his time with Team Russia. Coincidentally, that year was the last time a defending champion lost in round one – Oleg Znarok, freshly appointed to replace Bilyaletdinov, saw his Dynamo Moscow team beaten in seven games by Lokomotiv.

Sergei Shumakov has been the man of the series. Six (5+1) points, including a superb lacrosse-style goal in game one and a decisive hat-trick in the 3-2 win in game win, puts him atop the scoring chart after four games. Taylor Beck, in his first KHL playoff, joins him on six points with one goal and five helpers.

Two teams are already celebrating their strongest ever KHL playoff campaigns – and hoping there’s more to come. Avtomobilist had never won more than two games in a series before, achieving that last year when it lost in six to Metallurg. Today, the Motormen enjoy a 3-0 lead in their battle with Traktor and are poised to progress to the second round for the first time when the teams meet in game four in Chelyabinsk.

East: Avto close to victory, Torpedo back in the race. March 2 playoffs

In Sochi, it’s a similar story. The Black Sea team had only once won a postseason game prior to the current campaign. Now it’s locked at 2-2 against Lokomotiv in a series that looks like it could go the distance. That one continues Tuesday in Yaroslavl.

West: Sochi ties it up, Jokerit on the brink. March 3 playoffs

Jokerit’s overtime win at Dynamo Moscow on March 1 reignited that Western Conference series. But it had a deeper significance for the Finns. Sakari Manninen’s game winner snapped an astonishing 13-game losing streak against the Muscovites, dating right back to November 2014. However, Lauri Marjamaki’s team was unable to build on that success: two days later Dynamo won 3-0 to open a 3-1 lead in the series. The action continues in Helsinki on Tuesday.

West: Sochi and Jokerit get off the mark. March 1 playoffs

The big guns in the Western Conference were expected to breeze through the first round of postseason – but it hasn’t worked out quite like that. While CSKA is enjoying a comfortable 3-0 lead in its series with Vityaz, SKA faces a battle to get past Spartak. The Red-and-Whites sensationally won twice on the road in St. Petersburg – the second game decided by Martins Karsums five seconds from time after Spartak rallied from 0-2 – to stun the second seed. Game three in Moscow may yet prove pivotal: SKA’s 5-2 win got the Army Men off the mark, while Spartak’s influential forward Kaspars Daugavins was injured after he was tripped by Igor Shestyorkin. Both series continue on Monday.

Tight battle in the East

Metallurg vs Salavat Yulaev, two former champions going toe-to-toe. It always looked like a series to savor, and so it’s proved. After four games, the two titans are locked at 2-2. Metallurg has two overtime wins to its name, Salavat enjoyed a devastating 5-1 win victory after scoring three goals in 65 seconds at the start of game three. We’ve seen a big day for 23-year-old Magnitka goalie Artyom Zagidulin, backstopping a win on his first playoff start. Salavat forward Teemu Hartikainen is 3+3 from three games, putting him amid a clutch of players on six points at the top of the playoff scoring charts.

When Torpedo opened a 4-0 lead at Barys, that looked like game over. Only once before in KHL history had a team recovered a four-goal deficit in a postseason clash; that was when Traktor hit five goals in the third period to win 7-6 at Ugra way back in 2012. Barys, though, had other ideas. The fightback began with Anton Sagadeyev’s goal in the 29th minute and Dmitry Shevchenko reduced the arrears before the second intermission. Then came a Darren Dietz goal late in the third before Matthew Frattin’s power play tally tied the scores with just 102 seconds on the clock. Overtime was brief; shell-shocked Torpedo gave up a goal to Roman Starchenko in the second minute of the extras.

But that may not be the end of the comebacks. Barys led the series 2-0 at that stage but Torpedo took game three to stay firmly in contention.

Canadian forward Eric O’Dell potted his 100th KHL point in Sochi’s victory over Lokomotiv on Sunday. The Ottawa native marked his return from suspension with a goal and an assist in the game, taking him to 101 points in 168 appearances over three seasons in the league. During that time, the former Winnipeg Jet has also won Olympic bronze with Canada.

A newly-commissioned artwork captured the spirit of the 16 clubs contesting this season’s playoffs. Produced by renowned American graphic designer Eric Poole, the special poster is inspired by the mascots of the KHL’s leading teams and reinvents this year’s first-round match-ups as a series of superhero battles. The work is available for download as wallpaper for your mobile device here.

The KHL Universe: hockey superheroes and a cosmic trophy 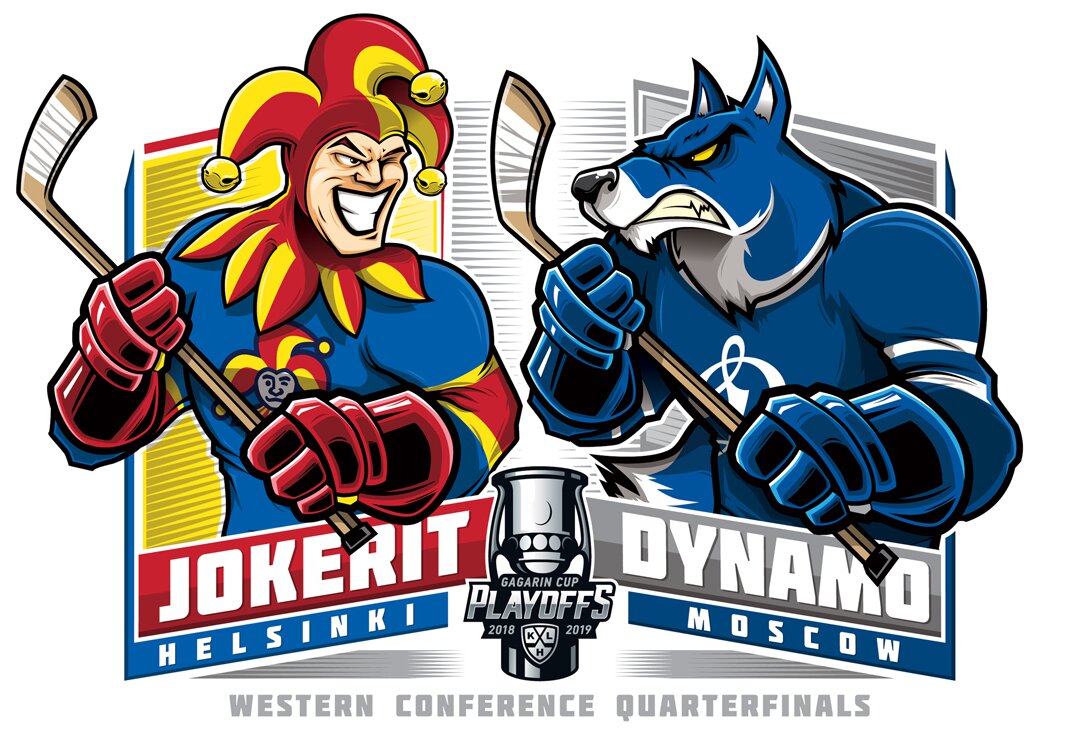 Refs off to Slovakia

Seven KHL officials have been selected as part of the refereeing team for the upcoming IIHF World Championship in Slovakia in May. Martin Frano, Roman Gofman, Evgeny Romasko and Maxim Sidorenko will be joined by linesmen Dmitry Golyak, Gleb Lazarev and Dmitry Shishlo. Yury Oskirko will referee in World Championship Division IA in Kazakhstan.