For the second time in three days, unheralded Spartak delivered a seismic shock to leave SKA fighting for its playoff life after a pair of home losses. Once again, Latvian forward Martins Karsums was at the heart of things; a goalscorer on Tuesday, he popped up again in dramatic fashion to snatch a 3-2 victory with five seconds left on the clock. In Moscow, CSKA is having no such problems. A second-period blitz against Vityaz set up another four-goal win with Nikita Nesterov picking up four points in the game.

Nobody saw this one coming. If Tuesday’s 2-0 victory for Spartak was a surprise, the prospect of the Red-and-Whites repeating that success and returning to Moscow with a 2-0 lead in the series seemed deeply improbable. And, when the home team finally managed to solve Julius Hudacek with two goals in the second period, it felt like normal service was resumed. The favorite, back on track, would surely go on to win from here.

Spartak, though, hadn’t read the script. Outplayed for two periods, the visitor produced an incredible fightback in the third. SKA, used to having its own way in this game, could not find a response. 2-0 became 2-2 and the final seconds of the game were ticking round. Spartak had the puck behind its own net and, rather than sit tight and wait for overtime, the visitor went for the jugular. Karsums took the puck into the SKA end and sprayed it right for Kaspars Daugavins; Daugavins moved it on to Ilya Zubov and Karsums continued his advance into the danger zone to convert the feed from his team-mate. Two goals in two games for the Latvian forward, a second sensation in the space of three days for Spartak. Sometimes, lightning can strike twice.

That spectacular finale was out of keeping with the opening exchanges. SKA started with a point to prove and got its first power play just 63 seconds into the action. That set the tone. SKA on the attack, Spartak and Hudacek doing everything to repel the home team. It wasn’t until midway through the frame, when ill-discipline saw SKA down to three skaters for a time, that Spartak was finally able to start testing Igor Shestyorkin in the Petersburg net.

If SKA was impressive in the first period, it was overwhelming in the second. Now Spartak was firmly pinned in its zone; the visitor would manage just two shots in the whole period while SKA got two goals. When Roman Rukavishnikov opened the scoring with a wrister from the point in the 27th minute, Spartak had spent just three seconds with the puck at the other end of the ice. Midway through the session a home power play saw Alexander Barabanov exchange passes with Pavel Datsyuk before firing a second goal past Hudacek.

But that was not the end of the story. Spartak killed a penalty early in the third and Yaroslav Dyblenko emerged from the box to start an attack that ended with Dmitry Kalinin crashing home a one-timer from between the hash marks. Out of nowhere, the visitor was back in the game. Then, late on, a rare power play chance for the Muscovites saw Ilya Talaluyev stuff the puck into an open net after Dmitry Vishnevsky’s deflected shot was parried by Shestyorkin. SKA was rocked, and Karsums was about to rock up and have the final word. Spartak takes a 2-0 lead back to Moscow; SKA must recover fast to avoid an unexpected first-round exit.

It takes four games to win a series. We’ll get ready for the next one. We had some problems on the bench in the third period, but that’s an internal matter.

On Tuesday, you promised that we would see different hockey tonight

For two periods, it was different.

Should we expect more in the next game?

Julius Hudacek kept us in the game in those first few shifts. But we hung in there and kept going until the very end. We took the chances that we created and it was an interesting playoff game. The series continues.

I want to thank our guys. We understood perfectly well that SKA would be very active, would keep the puck in our zone and get plenty of pucks to the net. But Julius kept us alive and we weathered the storm. The second period was a failure but we didn’t give up and we played for the full 60 minutes. 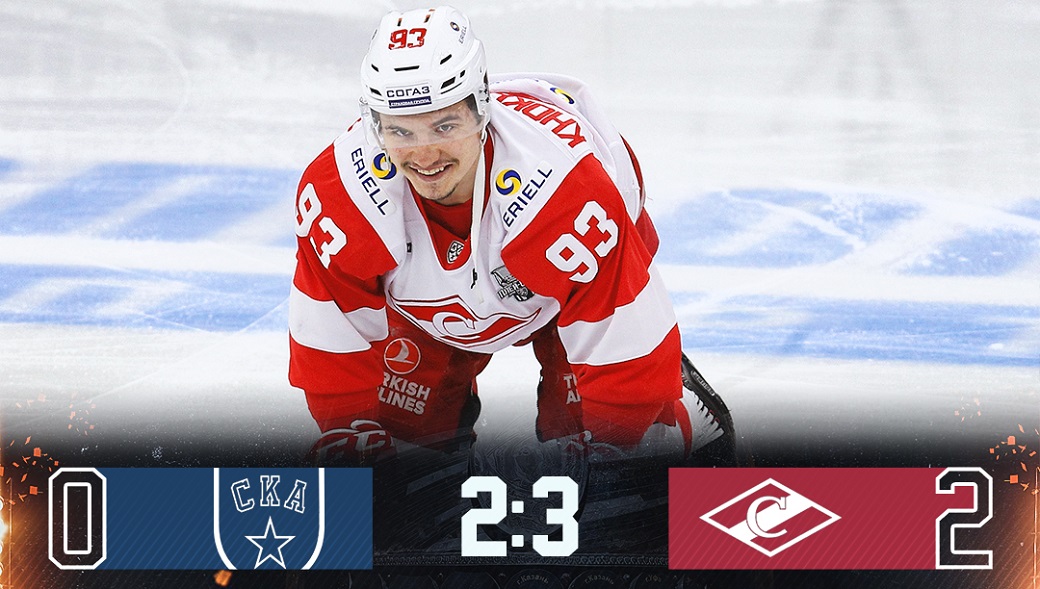 Another convincing win for CSKA

CSKA continues to live up to its billing as this season’s favorite to lift the cup. The Army Men’s imperious regular season form has carried over into the playoffs and this was a second successive four-goal victory over Vityaz.

True, the visitor posed more problems than in Tuesday’s 0-4 loss here but even after taking a first-period lead Vityaz was seldom in serious contention. A lopsided middle frame settled the outcome in CSKA’s favor and Igor Nikitin’s men make the short trip to Podolsk with a 2-0 lead in the series.

Any team facing CSKA knows that it will have to absorb plenty of pressure and make the most of the few chances it might create on the counter attack. Vityaz did that perfectly in the first period, soaking up long periods of home possession in the final third and capitalizing on one of the few occasions it got to hold the puck at the other end of the ice. Denis Kokarev, twice a Gagarin Cup winner with Dynamo, did the hard work behind the net and popped out a pass for Pavel Chernov to shoot home the opening goal 90 seconds before the intermission.

That provoked a real statement of intent from CSKA in the middle frame. An early power play yielded a goal from Mikhail Grigorenko just six seconds after the game resumed then Konstantin Okulov and Nikita Nesterov struck either side of the halfway point to open a 3-1 lead. Mikhail Naumenkov added a fourth shortly afterwards as the home team produced a textbook demonstration of how to create and convert scoring chances. Those four goals came from just 10 shots on Joni Ortio’s net.

Ortio did not reappear for the third period but there was little respite for incoming goalie Alexander Samonov. Another power play goal for Grigorenko early in the third took him to three in two games. Borna Rendulic pulled back a consolation effort for the visitor but Alexei Marchenko had the final say with CSKA’s third power play goal of the night 10 minutes from the end; Nesterov collected a hat-trick of assists on that play to finish with 1+3 for his evening’s work.

For Vityaz, this second visit to the KHL playoffs is proving as tough as the first, two seasons ago. Valery Belov’s team has yet to record a post-season victory but can take heart from its battles with CSKA in Podolsk. In the regular season, Vityaz had a win and an overtime loss against the Army Men on home ice.

I thought today we looked better than in the first game, despite the heavy loss. It’s fair to say that our goalie didn’t have the finest game of his career today and allowed some soft goals. We’re planning to start with Samonov in the next game, but that could change. Our offense did well, we had some good movement and an excellent attitude. We didn’t give up today, we kept going until th end. We’re ready to put up a real fight in Podolsk.

I agree that Vityaz skated well today. In the first period we didn’t have enough aggression in front of the net. After the break we showed greater desire, we worked harder at the net and we scored a few goals. We’re up against a well-organized opponent, it’s not so easy to break down their game. 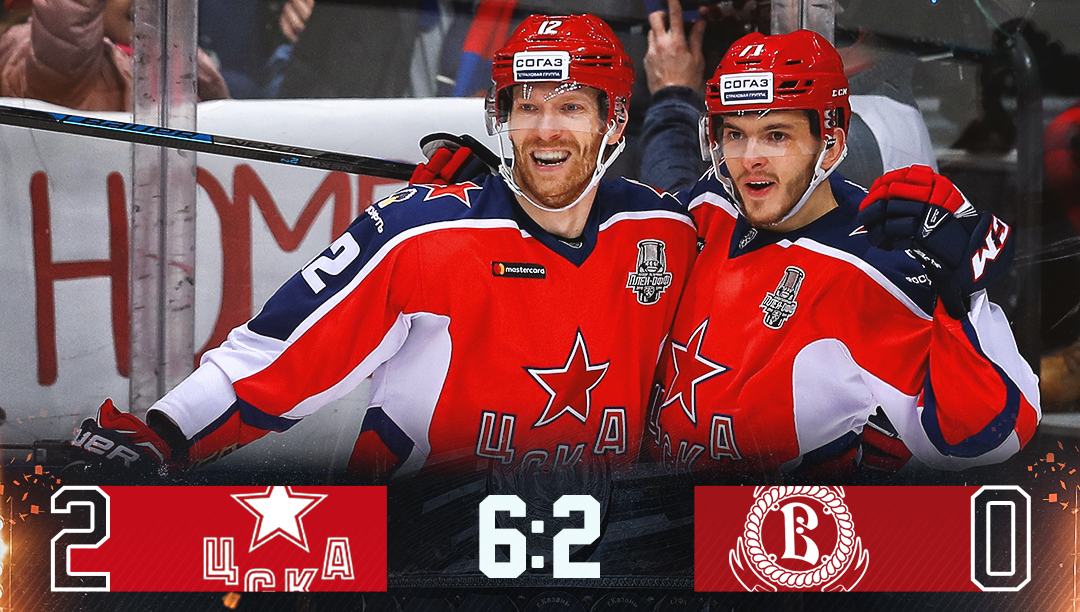