East: Avto close to victory, Torpedo back in the race. March 2 playoffs

There were contrasting fortunes for Saturday’s hosts in the Eastern Conference. Torpedo breathed fresh life into its series against Barys when it came from behind to win 3-1 and make it 2-1 overall. Traktor, meanwhile, produced an improved performance but lost out in overtime to Avtomobilist. The Yekaterinburg team leads 3-0 and is one game away from its first ever KHL playoff series victory.

An overtime victory secured by a Vyacheslav Litovchenko goal saw Avtomobilist take a 3-0 lead in this series. The Yekaterinburg team, which has never previously won a KHL playoff series, is poised to end that unhappy record and could settle this one as early as Monday when game four takes place in Chelyabinsk.

Litovchenko, 29, got his first goal of the series in the first minute of overtime when his low, angled shot went through Alexander Sudnitsin’s five-hole. Dan Sexton started the move, sending the former Amur man away down the left channel.

It was a tough blow for Sudnitsin, who had made 31 saves in regulation to get his team into overtime. The goalie lay face down on the ice as the visiting players rushed to celebrate with the army of travelling supporters; goaltending errors are often costly, but this one had the feel of a series decider.

Traktor, too, gave a much better account of itself on home ice after losing out twice on the road. From the start, the home team played a disciplined game. Neither team enjoyed many opportunities to roll out the power play. The host also worked hard to lock down Avto’s star forwards and in the first period the likes of Sexton and Stephane Da Costa were largely neutralized. Finally, there was plenty of patience on display as Alexei Tertyshny’s men calmly awaited their chance in front of Jakub Kovar’s net.

That chance arrived at the start of the second period. Jonas Enlund took the puck behind the net before teeing up Igor Polygalov. His shot was saved but the rebound went straight to Christian Thomas who tucked away his first KHL playoff goal. Traktor continued to press Avtomobilist hard and held its advantage until the second intermission with relatively few alarms.

It took something unexpected to bring the scores level and Andrei Obidin provided that two minutes after the restart. Nikita Tryamkin’s pass found the forward in center ice, Obidin advanced from the boards and surprised Sudnitsin with a shot from the top of the circle to make it 1-1. After working so hard to silence Avto’s renowned goalscorers, Traktor fell to a sucker punch from one of the team’s less familiar faces. Obidin almost added a second moments later when an error on the Avto blue line allowed him to race up the ice and take on Sudnitsin once again. This time, though, the goalie was equal to the challenge and the chance was saved. Traktor had one power play chance midway through the third period but the closing stages of regulation were marked by cautious hockey of the type more often associated with overtime.

When the extras came around, though, there was no time to be cautious. Litovchenko’s goal arrived after just 54 seconds to put Avtomobilist on the cusp of the second round.

First of all I’d like to thank our travelling fans for their magnificent support. And the home fans too, they created a great hockey atmosphere. Unfortunately, the game didn’t work out like we planned it. In the first two periods Traktor played some really aggressive hockey and seized the initiative. In the second intermission I talked with the team and we changed a couple of things. The next goal was always going to be vital and we managed to score it.

They played differently against our first line today. I saw a lot of hits on Dawes, a lot of aggressive play on da Costa and Golyshev. Every team will work hard against the opponent’s key players, everyone was doing his job. Just because our top line didn’t score today doesn’t mean they played badly. Hockey’s a team game; an individual might influence a game but it’s always the team that wins.

I thought it was a good game from us. The guys played with a good attitude, we got a lot of things right out there. But somewhere, luck was against us. So we move on to the next game and, if we keep playing like that, we’re capable of getting something.

It’s hard to say how we’ll play in the next game. But I’ll repeat, if we play the way we did in the second and third games, we definitely still have a chance. So now our task is to recover from today and work on our mistakes. 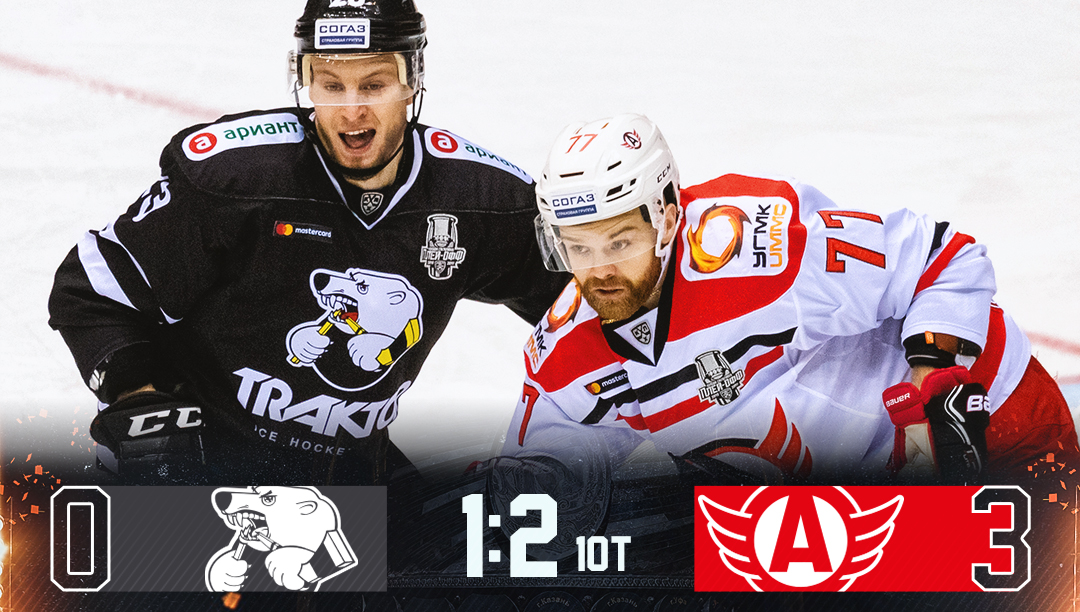 Torpedo back in contention

This is proving to be a bad series in which to score the first goal. Twice, Torpedo broke the deadlock in Astana only to finish on the losing side. Today, with the action moving to Nizhny Novgorod, Matthew Frattin put Barys ahead only to see the host hit back for the win.

The first period was dominated by a series of penalties. The most significant infringements saw Barys lose Darren Dietz and Andre Petersson on 10-minute misconduct calls after separate incidents late in the frame. That robbed the visitor of its two leading scorers from regular season but did not stop Frattin from opening the scoring midway through the game.

That goal came on the power play – the procession of minor penalties continued throughout this game – when Brandon Bochenski’s enormous experience quarterbacked the play. He exchanged passes with Viktor Svedberg before firing the puck to the slot where Frattin was ready to stuff it home from close range. Ahead in the series and now ahead in the game, Barys looked well set to claim a commanding 3-0 lead.

However, this series has been dominated by fightbacks. In game one, Barys cancelled out an early Torpedo goal to win 4-1; last time out, spectacularly, the Kazakhs rallied from 0-4 to win in overtime. Now it was Torpedo’s turn. Another string of penalties saw the host briefly enjoy a 5-on-3 advantage before the game fell into a 4-on-4 format. And that was when Torpedo tied the scores. Denis Barantsev’s first shot was a wild effort that flashed into the glass. The rebound, though, came back in front of the net and while Henrik Karlsson groped for the puck, Barantsev calmly slotted it home.

Five minutes later, Torpedo was ahead thanks to a short-handed goal. Swedish defenseman Philip Holm broke up a Barys attack and stormed up the ice. Dmitry Semin went alongside him, putting doubt into Karlsson’s mind, but the finish was emphatic as Holm smashed the puck into the far corner with Karlsson unable to react.

Barys sought to retrieve the situation in the third period and had good reason for optimism. In the past two games, Andrei Skabelka’s team had scored five without reply in the final frame. This time, though, its prospects were hampered when Maxim Semyonov was ejected from the game for spearing. The visitor killed that major penalty and even enjoyed a commanding lead on the shot count, but could not find a tying goal. Barantsev ended the contest when he put his second goal of the night into an empty net.

It was a great atmosphere and a great crowd, but it wasn’t a game the reached the level of playoff hockey. Neither team had much discipline, both forgot the responsibilities they have to their clubs. With discipline like that, any team could win or be beaten.

It didn’t feel like a playoff game, there were a lot of penalties and both teams had problems with discipline. I’d like to thank my team for its attitude, its determination and willingness to work. We couldn’t give up, we had to take an example from our opponent, which recovered from 0-4 in the previous game. If we keep that attitude, that fight, we will always have a chance.