West: Sochi and Jokerit get off the mark. March 1 playoffs

Sochi and Jokerit both picked up their first wins of this year’s playoffs to reduce the deficit to 1-2 in each of their series. And both teams won in similar fashion, tying the game late in regulation before claiming a 3-2 verdict in the extras. Sochi succeeded on home ice against Lokomotiv, while Jokerit defeated Dynamo in the first playoff game to be staged at the club’s new arena in Moscow.

Sochi’s young forward Andrei Altybarmakyan announced himself on the playoff stage with two goals to snatch victory from the jaws of defeat and give his team a lifeline in this series. The 20-year-old, who first came to wider attention in the 2017 All-Star Game, struck late in the third period to deny Lokomotiv a third victory in the series. Then he potted the game-winner at the start of overtime, hauling Sochi back into contention at 1-2 in the best-of-seven affair.

Altybarmakyan’s performance overshadowed Staffan Kronwall. The Swedish defenseman had a goal and an assist for Loko, maintaining his productive start to the playoffs and taking him to 6 (3+3) points from three games so far. The 36-year-old has kick-started his productivity after a relatively sluggish regular season yielded just 11 points in 54 games.

The first period was cagey, with neither team able to spend a lot of time in the opposition zone. Lokomotiv broke the deadlock in the 17th minute through Stepan Sannikov. Kronwall fed Denis Alexeyev, whose shot rebounded off the post, and Sannikov was fastest to react to the rebound. The former Sibir forward might have added a second midway through the game when he collected the puck in his own zone and raced off to a one-on-one with Dmitry Shikin. This time, the goalie came out on top and within seconds, Sochi was level. Sergei Shmelyov’s shot got a redirect from Sean Collins and the video confirmed that the forward’s stick was below shoulder height. From risking a short-handed goal to scoring on the power play, Sochi’s evening – and perhaps the series – had changed direction.

It wasn’t plain sailing from here, though. Lokomotiv regained the lead in the 34th minute after camping out in the Sochi zone. Brandon Kozun’s pass, fired across the ice even as he fell under the attentions of a defenseman, picked out Kronwall at the top of the circle. Loko’s captain made no mistake and the game was turned around once again. Lokomotiv finished the second period on top and prepared to close out the game in the third.

Now it was time for Altybarmakyan. Chances were hard to come by; Sochi was working hard but finding it tough to wear down the Lokomotiv rearguard. Then, in the 54th minute, came the breakthrough. Yegor Rykov went round the back and popped the puck out for Altybarmakyan to come streaking between the hash marks and fire home a one-timer. The teams traded attacks in the closing moments, with Martin Bakos coming close to winning it in regulation with a breakaway surge that ended with a shot flashing over the bar, but we were destined for the second session of overtime in this series.

Once again, it was Altybarmakyan to the fore. With just 95 seconds played, he came in from the boards and fired past Ilya Konovalov from the right-hand face-off spot. Team-mate Nikita Tochitsky played a big part as well, delivering the puck to Altybarmakyan before going to the net and screening Lokomotiv’s young goalie.

The third game, maybe there wasn't so much energy tonight. I think we did well for the first two periods, but in the third … It feels like we've already lost to Sochi many times in the third period. We need to think about that. And, of course, the first shift, concentration, the goal in overtime - that was sad. But it's 2-1, we're still in front.

We pleased to be back in the series. The guys showed great responsibility, especially in the third period when we created several chances that got us into overtime. Then we got a good break, we had some fortune. Obviously Barmen [Andrei Altybarmakyan] deserves special credit today. He popped up a couple of times when we needed him. The series goes on, we'll do our homework and get ready for the next game.

Jokerit finally managed to defeat Dynamo, snapping a 13-game losing streak against the Blue-and-Whites and reigniting this series. The Muscovites had won twice in Helsinki to assume control of the contest but failed to press that advantage here, despite leading as the game went into its closing stages. Sakari Manninen became the Finns’ hero, tying the scores in the third period before snatching an overtime winner.

That wasn’t the conclusion that the host had planned. This was the first ever playoff game to take place at Dynamo’s new VTB Arena, and with the team two games up following its trip to Finland, there were high hopes that Vladimir Krikunov’s men would see out the series in their newly-built home.

The game began at a high tempo, with Dynamo looking the likelier team in a lively but goalless first period. That pattern continued into the second and the pressure on Janis Kalnins’ net paid off midway through the period. First, Juuso Hietanen thought he had opened the scoring on the power play; the video verdict found that Kalnins was impeded and the celebrations were cut short. However, there was not long to wait before the VTB Arena saw its first post season goal. Defenseman Michal Cajkovsky’s fine pass down the boards released Vladimir Bryukvin and the Dynamo forward did the rest.

Cajkovsky quickly went from hero to villain; his positive contribution was soon cancelled out by some ponderous work on defense as he allowed Pekka Jormakka to streak past him in center ice and put the puck behind Ivan Bocharov, preferred in the home net to Alexander Yeryomenko.

Dynamo restored its advantage with a short-handed goal. Igor Makarov’s lofted pass from his own zone sent Ivan Igumnov on his way to Kalnins’ net and the young forward calmly converted the chance. The home team could, arguably should, have extended its lead after the second intermission but failed to take its chances and was hit by a late goal from Manninen. With the clock running down, the forward got the decisive touch on a point shot from Sami Lepisto and Jokerit was saved. Five minutes into the extras, Lepisto and Manninen reprised that routine and the forward got his second redirect to win the game for the Finns.

The series started well for us, we won the first two games but finally we’ve lost one. We need to keep working. It wasn’t easy in Helsinki but we managed to stand up to it. Today we allowed them a second goal and then a third. Overall, we worked hard and we did all that we could. We’ll keep going, the series continues.

Our penalty kill showed up pretty well but we didn’t look as good playing 5-on-5. The players decided to sit back and defend the 2-1 lead even though we told them to keep on playing the same way and looking for another goal.

It was like the other games in this series, every one has been a one-goal game. I’m proud of the team, especially the way we reacted after two home losses. We got it together and got a win at a critically important stage of the series. Even so, we have a lot of things we need to improve and we’ll work on them.

I don’t think [the 13-game losing streak] had much influence on us. Moreover, we understood that the more games we lose, the closer we come to a win. 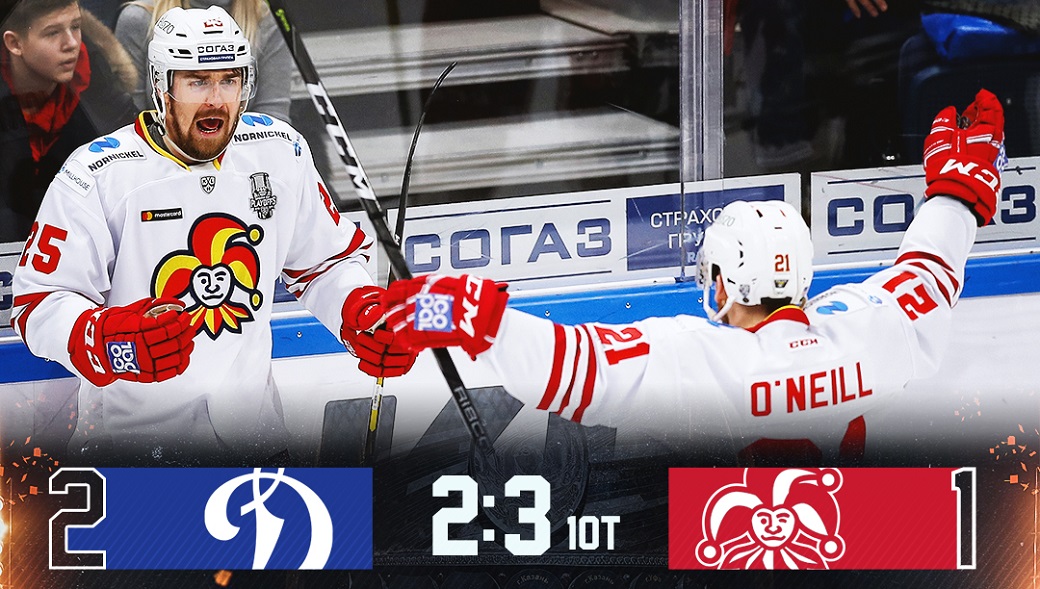