Avangard sensationally completed a sweep of defending champion Ak Bars to send last year’s top team crashing out at the first hurdle. A Sergei Shumakov hat-trick secured a 3-2 win in Kazan and completed a 4-0 series success. Earlier, Metallurg claimed an overtime win at Salavat Yulaev to square that series at 2-2 before the action returns to Magnitogorsk.

Metallurg gained its second overtime win of the series to ensure that it returned home tied at 2-2 after four games. Matt Ellison’s power play goal in the extras secured the verdict, while goalie Artyom Zagidulin marked his first ever playoff start with a victory.

Zagidulin’s selection ahead of Vasily Koshechkin was the only change for the visitor, with the club scotching media reports that a flu epidemic had gripped the team in Ufa. Salavat Yulaev made one welcome change, with influential blue liner Philip Larsen returning to his accustomed place in the first defensive pairing after shaking off an injury.

The first period was dominated by penalties. The first infringement arrived after 63 seconds and subsequently the doors to the sin bins saw regular action. Grigory Panin and Evgeny Timkin squared up in the seventh minute; the Metallurg forward won the bout with a single blow to the jaw but both players got major penalties for their pains. The session ended with Salavat Yulaev on a 5-on-3 power play but the home team struggled to press home that advantage.

Early in the second stanza, Metallurg took the lead. The Ufa defense was slow to close down the opposing forwards and Dennis Rasmussen took advantage to open the scoring after Juha Metsola blocked Maksim Matushkin’s shot. Then came a work-out for Zagidulin at the other end as Salavat Yulaev upped the tempo in search of a tying goal. Chances came and went, the post came to Zagidulin’s aid, and Magnitka’s lead remained intact.

There were barely five minutes left when Salavat tied the scores. Ellison gave up possession in his own zone and Dmitry Kugryshev led the breakaway. He fed Alexander Kadeikin, whose shot was deflected past Zagidulin by Vladimir Zharkov. It took a long time looking at the video to confirm that there was no deliberate motion of skate to puck as Zharkov found the net but the final verdict went in the home team’s favor and the game was tied.

Two of the key protagonists in that play also shaped the overtime winner. Zharkov took a hooking penalty and, on the resultant power play, Ellison got the redirect to steer Viktor Antipin’s center point shot past Metsola. Once again, there was a video review: Michal Bulir’s stick was raised in front of the Finnish goalie, but did not touch the puck; Ellison’s stick was low and the goal stood.

As expected, then, this clash of two former Gagarin Cup winners is poised to go all the way. After four games, the teams are locked at 2-2 and meet again in Magnitogorsk on Tuesday to discover who will forge ahead in game five.

The team played to win, we learned from the previous games. I hope that Linus Omark wasn’t deliberately trying to mislead the officials; he’s one of the best players in this league and I’d like to see everyone playing honest hockey. We went with Zagidulin because the last couple of games were hard on Vasily [Koshechkin]. He allowed three goals at the start of the previous game so we decided to make a change. Zagidulin played well, we need two strong goalies in these playoffs. I don’t want to comment on any reports about injuries or illness. We have enough strength in this squad.

It’s 2-2 and the series starts all over again. This was a good, competitive game but unfortunately we lost out in overtime. We’ll have to get ready for the next game. Larsen skated this morning and told us he was ready to play so we put him back in the team. 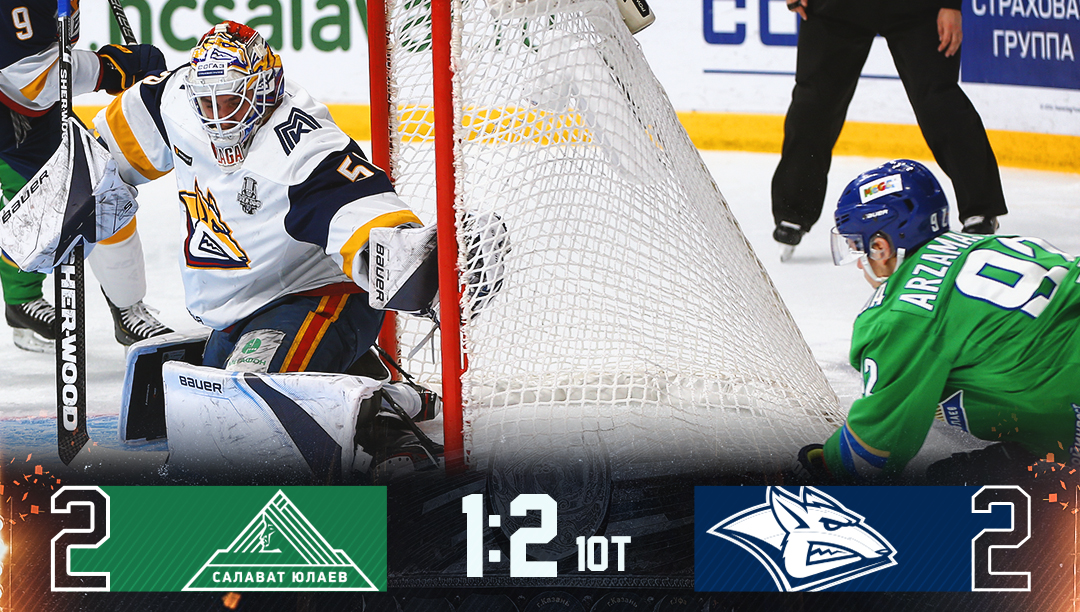 Sergei Shumakov is loving these playoffs. He announced himself in postseason with a lacrosse-style goal from behind the Ak Bars net in game one and helped himself to a second in that game. Today, he went one better to grab a hat-trick as the defending champion crashed out in the first round. That’s the first time a Gagarin Cup holder has lost out at this stage since 2014, and the first time ever that a reigning champ has been swept in the opening match-up. Ak Bars also suffers a first-round exit for the first time since 2014.

With five goals and one assist, Shumakov has played a big role in Avangard’s success. The forward joined the team midway through the season, returning from a frustrating stint in North America to bolster the Omsk forward line. In regular season he had 17 points in 21 games; now he is poised to improve upon his best-ever playoff haul of 10 (4+6) points in 10 games with Sibir in 2015-16.

In this game, he opened the scoring in the sixth minute after Kirill Semyonov sent him off to the races. Cutting inside, Shumakov’s first effort found Vladislav Podyapolsky’s pads but the goalie could not keep a hold of the puck and the forward was able to stuff home the rebound.

That lead lasted a mere 40 seconds, however. Ak Bars got on the power play and Anton Lander stood in front of the net to bat down a Paul Postma shot and tie the game. But the second period would be all about Shumakov as Avangard built a lead that would see it secure both game and series.

Shumakov’s second was again assisted by Kirill Semyonov. This time Semyonov kept the puck in play at the point before spraying a perfect pass for Shumakov to shoot home from between the hash marks. Then, on the half-hour mark, the former Sibir and CSKA man completed his hat-trick with a power play effort. This time he started and finished a combination involving Taylor Beck and Denis Zernov; the puck travelled around the Ak Bars zone and returned to its source with Shumakov poised to rifle home a one-timer from the face-off spot.

All that left just 30 minutes for Ak Bars to salvage its season and the task proved beyond Zinetula Bilyaletdinov’s team. In need of a big offensive performance in the third period, the home team dropped out of contention with a whimper when it managed just six shots on target. To make matters worse, Ak Bars got the perfect start to the final frame when Mikhail Glukhov scored in the 43rd minute. But there was no opportunity to build on that foundation and three penalties in the final frame killed the home momentum and saw Avangard become the first team to book its place in the Conference semi-finals.

I’d like to congratulate Ak Bars on a good series. Yes, we won 4-0 but at times we got lucky. Our guys did everything to deserve that luck. Right from the very beginning, we saw things taking shape exactly as we needed in this series. Even in my wildest dreams I didn’t think we could win four games in a row against Ak Bars.

I have to pay tribute to [goalie] Igor Bobkov and the other players. We looked great whether we were at equal strength, on the power play or on the penalty kill. This is just the first step for us on the road to the Gagarin Cup.

[Conditioning coach] Brandon Bovee did an incredible job, we’re lucky to have him with us.

Today we did all that we could. I can’t fault the players for their commitment or desire in this game. Unfortunately, though, it wasn’t enough. Now we have plenty to work on. We need to look at what went wrong and get ready to put it right next season. It’s a long time since we’ve been in a situation like this, but there are reasons why we are here now

We need to take some time to look at the reasons for this loss. Today we played well, the guys worked hard. Let’s stick to questions about the game, rather than about our staff. 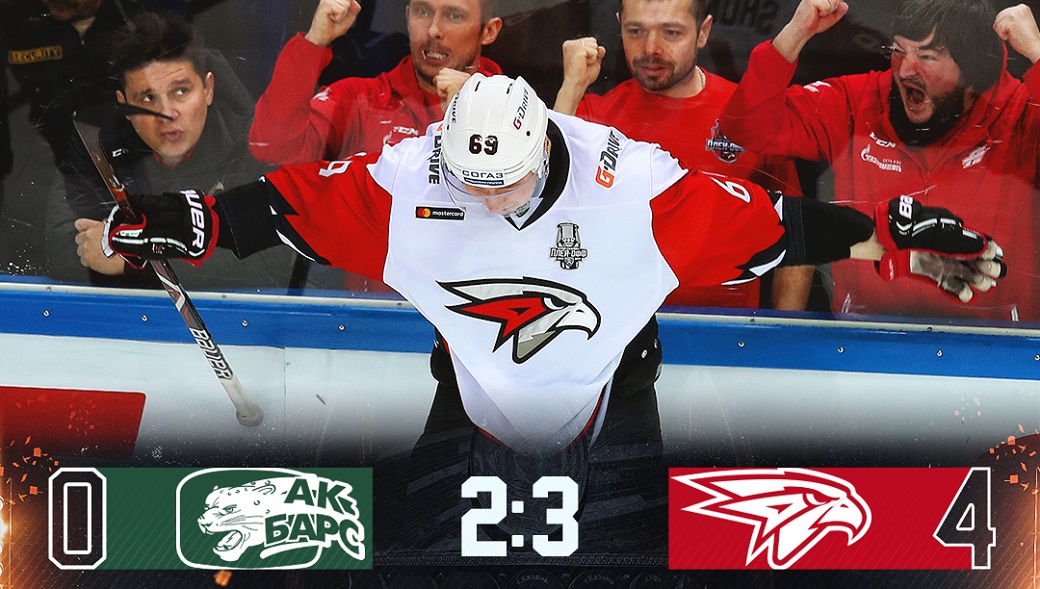