Positives And Negatives Of Dinamo Riga So Far

Seven games into the new season Dinamo Riga have found themselves moments of sadness and moments of happiness. From big wins to big loses - the consistency and the correct path to playoffs is yet to be found. Just like everywhere in life there are positives and negatives and that’s what we are going to look at today - what they have done well and where they have to improve.

Dinamo’s offence has been able to bring them goals - although they currently hold the 14 position in goals for and certainly could do better. The positive sign is that the team has been able to score goals in all but one game - they were held scoreless against Lokomotiv Yaroslavl at home - in a game where they couldn’t manage to do a whole lot. They scored the most goals against Kunlun Red Star where they pulled off a victory with a score 6:5. Another thing that they can be happy about is that a variety of players have gotten themselves at least a goal - 11 of 25 players that have dressed and played games. Another key factor for Riga has been their power-play, they currently rank sixth with 30.4%, 23 chances and seven goals on man advantage.

Emile Poirier has been really consistent offensively earning himself four points (3+1) in seven games and stepping up when it’s been necessary. He has been the main generator of offence for Riga creating chances often and could’ve had a lot more points if the games went his way even more. Sometimes he tries too hard and that reflects in his penalty minutes - his tied for first place on the team with 12. 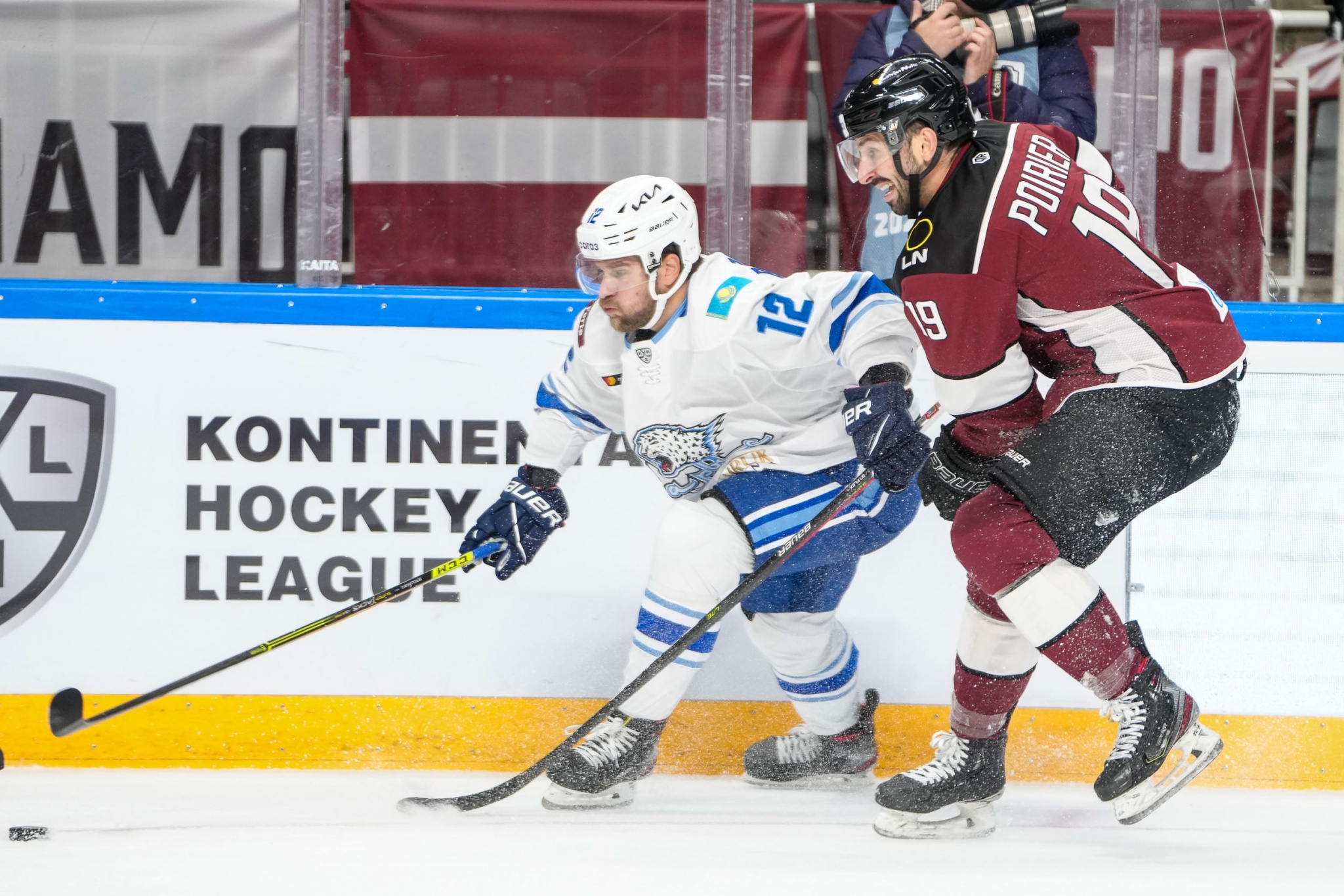 Rudolf Ceverny could be called the surprise of the season so far. The 32-year-old centermen has brought his experience and helped his team in important moments. He currently has three points in six games - all three are goals. His best game was against Kunlun Red Star where he managed to score two goals helping his team get the very first victory of the season. Much like his colleague Poirier, sometimes the Slovak player tries too hard and he’s the one that is tied with Emile for the lead in penalty minutes category.

Sebastian Wannstrom - a lot has been expected from him, a proven goalscorer that hasn’t been able to put up consistent numbers, has missed games already and has taken the back seat to others. There have been opportunities to score but so far the player has been able to earn a single goal that is also his only point. The Swede has done well in the defensive zone but only time will tell if he will be able to find his goal-scoring touch that could be really helpful for the Dinamo team.

Lukas Radil isn’t far from his peak performance as he has earned three assists in seven games played. Radil has plenty of KHL experience in being amongst top players for Spartak Moscow but it hasn’t really translated for Dinamo so far. His offensive capabilities are at a level that Riga haven’t had in a long time and they will be certainly waiting for him to begin crushing the game in the opponents defensive zone. On ice you can tell that he hasn’t adjusted to the new surroundings yet but once he does - the Latvian based team will have a whole lot to be happy about.

Dinamo’s defence has been the main issue to this point in the season. On the road to begin the season it looked very shaky, once the team arrived at home their issues had slightly decreased but you could still see that once the opponent begins to play aggressive in the offensive zone passes all of a sudden are going through, a zone successful zone exit seemed far from reality and only way to get to breathe was just dumping the puck as far away as possible. Once Dinamo started playing their own game their issues in their own zone were just gone. You could see glimpses of misunderstanding in the final two home games but ultimately they had improved a lot which has been one of the main reasons why the results are showing. Riga currently sit third in goals against with 24, they are also tied for the third-worst penalty kill percentage at 70% together with Lokomotiv Yaroslavl and Dinamo Minsk.

Defencemen: There are many kinds of defencemen - some are more defensive, some more offensive but priority stays the same - get the W.

Brandom Gormley has been one of the most consistent Dinamo players on the back end helping defensively and also being able to create scoring chances. The Canadian forward is currently tied for most points on the team with four (1+3). Gormley skates well, he sees the ice well, and can use his size to battle for the pucks along the boards. Certainly one of the best additions for Riga during the off-season if he can stay consistent with his game.

Frank Corrado had a slow start of the season, another player that had to find chemistry with teammates but once that got going - he has been excellent. During the first few games you couldn’t notice him once he got out of the defensive zone and if you did - it likely was because of an error. Corrado currently has three points (1+2) and his goal came against Barys Nur-Sultan - a very important one that helped his team earn back-to-back victories on home ice. 29-year-old brings many qualities to the team and will be one of the leaders if he can keep up playing the way he has in the past few games.

Kristaps Sotnieks has seen time with different partners this season while playing in five games. He has no points and that’s understandable - his task isn’t to go out there and tear opponents apart - he’s a stay at home guy and has learned a lot while playing as a youngster beside Sandis Ozolins, however the start of the season hasn’t been his best so far. He’s been on the ice on multiple occasions when the opponent scores and although he hasn’t made any major errors there are tiny mistakes that he will have to work on in order to regain the status of ‘’got-to’’ guy when the game is on the line.

Karlis Cukste was the surprise signing during the off-season when the young Latvian came over from North America to return home and represent Dinamo colors. Given his CV and seasoning in America many expected big things from him. He hasn’t performed to the best of his ability just yet. Main issue is probably a lack of experience at the pro level. His first pro year wasn’t something that somebody would dream of. Uncertainty about the start of the season across the pond forced him to start the season in Latvian league, then he returned to North America where he played in two different leagues. He has taken part in four games and on many occasions he has been the extra guy. Hopefully for his team the experience watching the games from the sidelines will help as the 24-year-old has a lot of talent and in the future could become a top-pair player for his home team.

The most important position in hockey is goaltending and Riga have found themselves with two talented guys. One has proven himself as the number one early on - Johan Mattsson has been stellar and given Dinamo a chance of victory in every game he has played. The Sweden has been teams MVP so far this season demonstrating a calm presence in net and when necessary making saves he’s had no business making. His size has helped a lot and he isn’t shy when there is pressure put on his net. He loves it and seems to improve once the game gets tougher as if he has a switch that allows him to perform under pressure. Mattson averages 2.17 goals against per game and has a save percentage of .928. 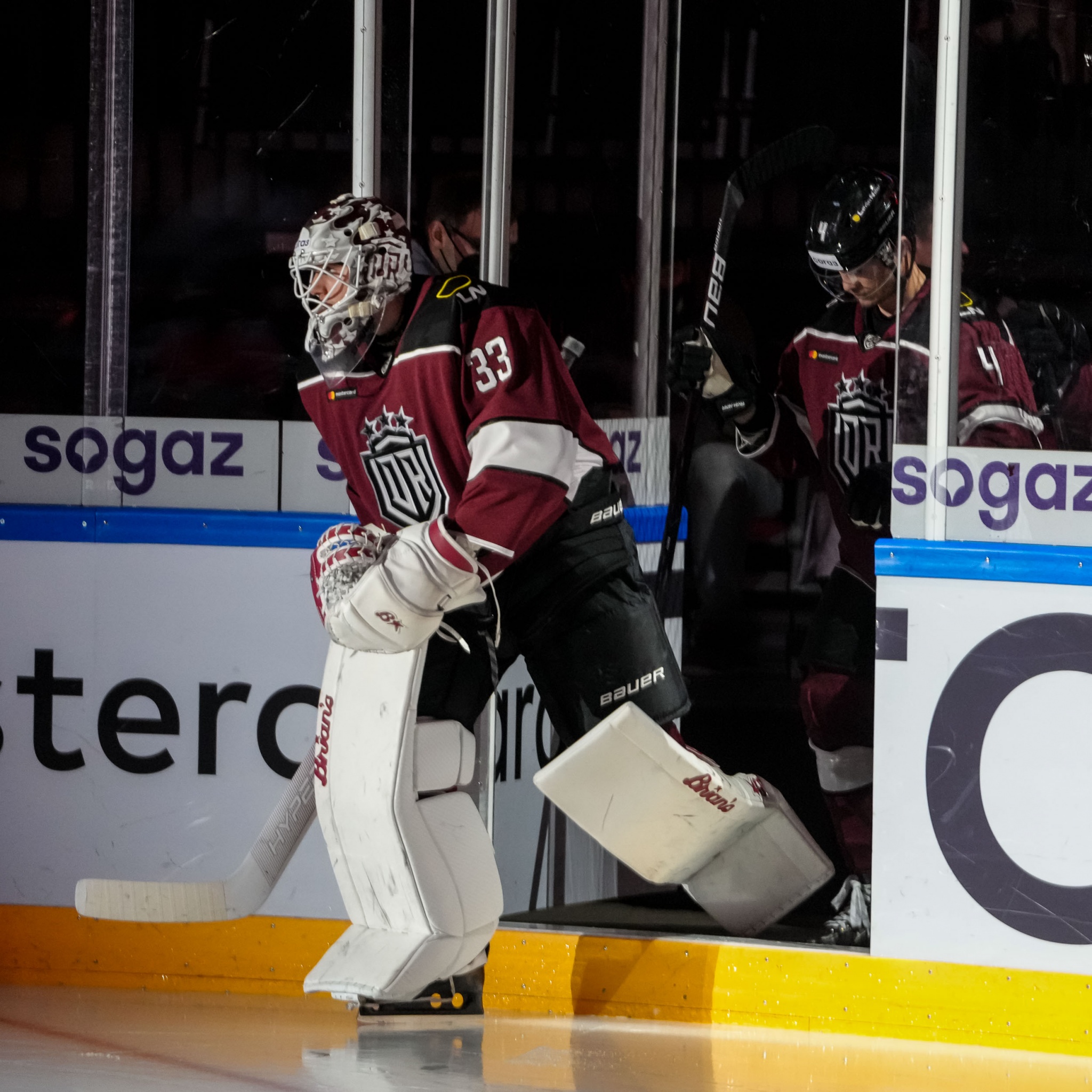 For Matej Machovsky the stats don’t do any diligence - in three games he has a 6.87 goals against average and saves percentage of .783. On paper it looks bad but during the games you can see that he has got what it takes to fight for the place as starting goalie. The 28-year-old hasn’t reached his potential so far but the team hasn’t performed as well as they have in front of his Swedish partner. It could take time before he sees the ice again but once the team gets rolling he should see an opportunity to take and prove that he is much better than what we’ve seen and that he is also capable of pulling the team when necessary.