This time next week, we’ll be getting set for the start of the playoffs. At this stage, all but three places are booked, with Jokerit confirming its participation last week. Dinamo Minsk and Severstal are both one win away from joining the qualifiers in the West, but there’s a battle between Spartak and Vityaz for the eighth and final spot — and that could go all the way to a head-to-head clash between the teams on Saturday’s concluding day of the regular season. As it stands, Spartak has the advantage, but that could all change this week. If the playoffs started tomorrow, the first-round pairings would look like this: CSKA vs Spartak; SKA vs Severstal; Dynamo Moscow vs Dinamo Minsk; Lokomotiv vs Jokerit; Ak Bars vs Barys; Avangard vs Torpedo; Metallurg vs Avtomobilist; Salavat Yulaev vs Traktor. 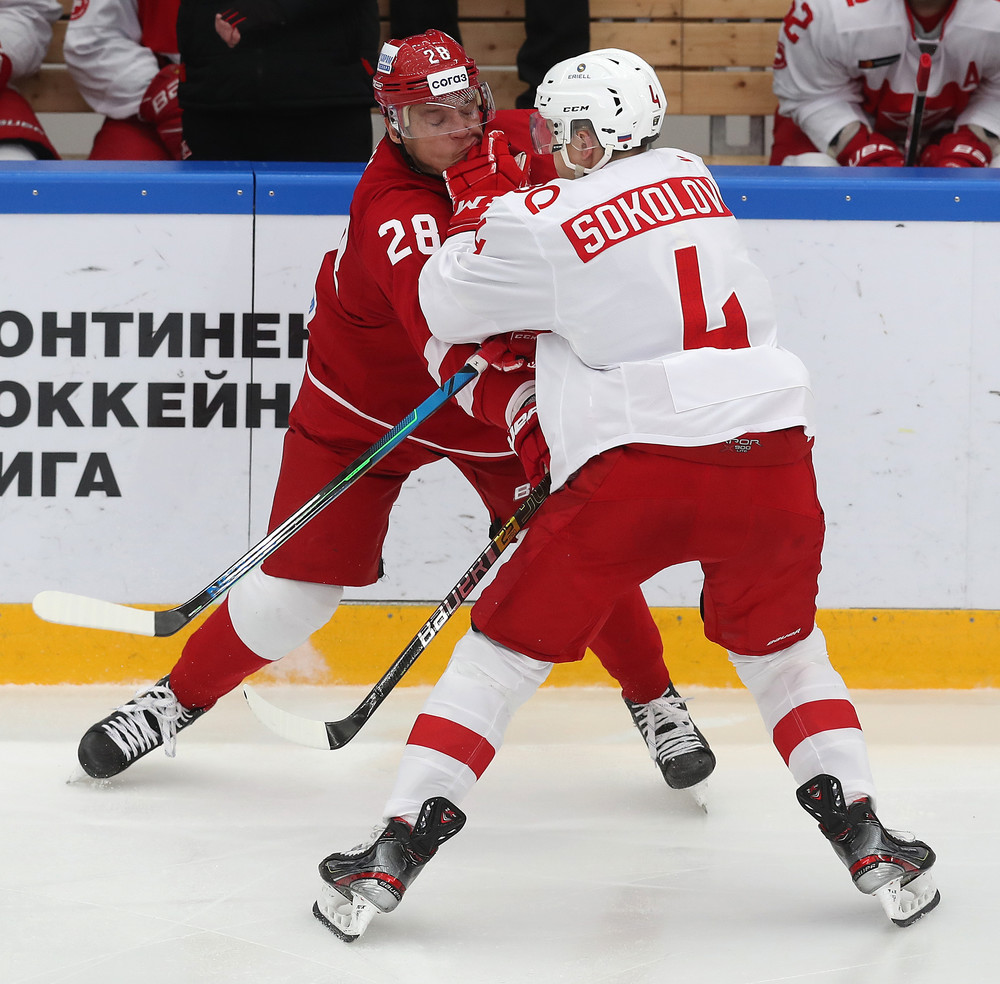 Dynamo Moscow forward Dmitrij Jaskin scored his 36th goal of the season in his team’s win at Jokerit — and broke a long-standing record for the most goals scored by a Czech player in a regular season. Jaskin, born in Omsk but brought up in the Czech Republic, beat the mark set by the late Jan Marek scored for Metallurg in the KHL’s debut campaign. Jaskin also established a new club goalscoring record for Dynamo.

Goalie stats are usually dominating by GAA and SV%. Jakub Kovar, meanwhile, does things differently. Avtomobilist’s Czech international set a new KHL record last week when he recorded his fifth assist, beating the four helpers recorded by Bernd Bruckler, Anders Nilsson and his compatriot Roman Will. The race isn’t quite done for this season, since Will has a chance to overtake Kovar in Traktor’s remaining games, but Jakub already has the edge in the all-time scoring chart with 13 career helpers, two more than Metallurg’s Vasily Koshechkin.

Man of the Week — Jakub Kovar

The first ever KHL MascotsMania contest reached its climax on Sunday — and Dynamo Moscow’s Wolf won the title in the inaugural edition. He battled through three rounds of live competition against the league’s other 22 mascots in the gala final, before winning a head-to-head contest with Traktor’s Polar Bear to secure the prize. Polar Bear did not go home empty handed, though: he won the dance battle after coming out on top in an impromptu dance-off featuring the stars of the six most eye-catching videos submitted during the competition. Sibir’s Snowman took the honors for the best penalty shot, recreating Vladimir Tarasenko’s masterpiece from the 2012 All-Star Game

Finally, Dinamo Minsk’s Zubrik collected his Priceless Mascot prize. Donated by the KHL’s partner, Mastercard, this included an Oscar-style statuette and a new sound system to inspire some even bigger dance routines at Arena Minsk.

And the winner is ... Wolf Dynamo!

Barys goalie Henrik Karlsson is enjoying his fifth season in the Kazakh capital. In that time he’s seen some big changes at his club — and he’s optimistic that the future has rarely looked brighter, even if the current season has been a struggle due to off-ice issues.

“One of the best things is that every year we have several young players who come in and deliver results,” he said. “These days, it’s not just about Bochenski, Boyd and Dawes, or the other imports. Our home-grown players are getting better and better and they deserve their place at the heart of the team. We have an excellent mix of locals and imports and this is the key to our success.”

Henrik Karlsson: “Hockey without fans is another sport”

Last week’s games established the table-toppers in both the Eastern and Western Conferences. CSKA secured top spot in the West on Thursday despite losing at home to Traktor. City rival Dynamo Moscow won at SKA on the same day, leaving Valery Bragin’s team with too much ground to make up. It was a similar story on Saturday as Ak Bars followed suit and claimed first place in the East. Dmitry Kvartalnov’s team had plenty to think about after blowing a 2-0 lead at home to Spartak and losing in overtime, but the point ensured that Avangard could no longer reach its rival from Kazan.

Remember Alexander Semin? His career did not come to a halt after 11 years in the NHL and today, a few weeks away from his 37th birthday, he is a hugely influential figure at Vityaz. Club captain and leading scorer, he combines a big contribution on the ice with the role of a mentor for the team’s emerging prospects. And that continuing commitment was rewarded this week when Semin was presented with the ‘Dedication to Hockey’ award prior to Saturday’s home game against Metallurg. The prize was due to be given out at last season’s closing ceremony, but due to the pandemic it was impossible to stage that gala evening. Instead, Semin received the award prior to his team’s final home game of the regular season. 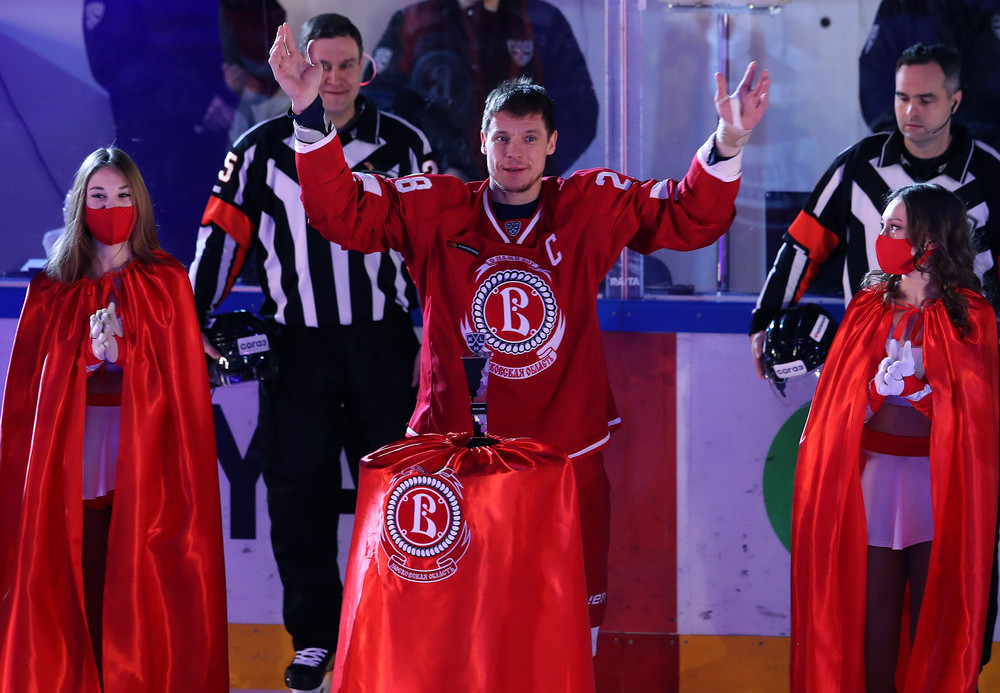 The game between Riga and Kapitan went to a shoot-out before the Latvians got the verdict and Rolans Vasiljevs was among the successful attempts in the extras. His effort was not the winner, but it was the prettiest, with the youngster replicating Nikita Kucherov’s deke to beat Artemy Pleshkov.

“My teammates offered to rename the move after me”. HK Riga player scores a beauty

Yegor Guskov of Loko Yaroslavl beat Kirill Ustimenko’s shut-out record in a Junior Hockey League regular season. He stopped 25 shots in his team’s win over Dynamo Moscow to keep his goal intact for the 13th time this season.

On Sunday, KRS Vanke Rays won 5-0 at Agidel, with two goals apiece from Rachel Llanes and Alex Carpenter, plus another from Hannah Miller. The victory in Ufa guarantees the Chinese franchise top spot in the Women’s Hockey League regular season. Brian Idalski’s team has 67 points from 25 games and can no longer be caught by Agidel.

This season the Vanke Rays have 23 wins from 25 games and are currently on a league record run of 14 consecutive victories.