Man of the Week — Jakub Kovar

KHL.ru’s weekly ’Man of the Week’ column goes on with another record holder. The Czech netminder has amassed five assists so far, surpassing Bernd Bruckler, Anders Nilsson, and his fellow Czech countryman Roman Will, all stuck at four. However, both Czech netminders will have a chance to improve their score as the regular season isn’t over yet.

Yesterday, Avtomobilist lost to Amur, but Jakub Kovar has still a little reason to celebrate. In the second-period goal by Georgy Belousov, the goalie had his fifth point in the season, establishing a new single-season record for a netminder’s most points. Not surprisingly, Kovar also tops the all-time standings with 13 assists — two over Metallurg’s Vasily Koshechkin and five over Ilya Proskuryakov, who was the first KHL goalie with a tally back in 2009. To further measure Kovar’s greatness in the KHL, he’s also in the top five netminders for all-time shutouts in the regular season as he blanked the opposition 41 times.

Jakub Kovar and his brother Jan — who also played five years in the KHL with Metallurg — were born in Pisek, a town in the Southern Bohemia region of the Czech Republic, where they started playing. After paying his dues in Pisek, Kovar moved to the nearby city Ceske Budejovice in 2005, and played there for two seasons. At the end of his first campaign in the Czech U20 league and a successful showing at the 2006 U18 WJC in Sweden, Kovar was drafted in the NHL by the Philadelphia Flyers in the fourth round. One year later, he moved overseas and spent a season in the OHL split between the Oshawa Generals and the Windsor Spitfires. However, his North American career was short, and he returned home in the next season already. 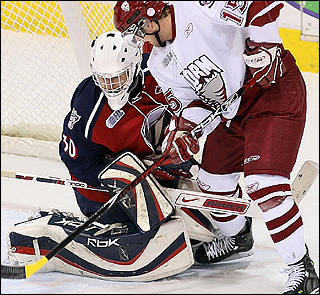 In 2008, Kovar returned to the Czech Republic signing back with HC Ceske Budejovice, where he slowly climbed to the status of one of the best goalies in the local Extraleague. Despite his incredible performance between the piping, Ceske Budejovice never achieved postseason success, similarly to what happened with Avtomobilist in the KHL. The Pisek native also started climbing up the ranks with the national team, becoming a starter for his country for the first time at the 2012 IIHF WC in Finland and Sweden, when he helped Team Czech Republic returning home with a bronze medal. After another fantastic season in the Extraleague in 2012-2013, he left his home country to sign in the Kontinental Hockey League.

In May 2013, Kovar agreed on a deal with Avtomobilist Yekaterinburg of the KHL. The Czech goalie’s stats were excellent right away, and during his first campaign with the Urals franchise, he had a chance to represent the Czech Republic at the 2014 Olympics in Sochi. He then played further two seasons with the Motormen, showcasing great concentration, unparalleled stamina, and fantastic numbers. However, after three years in Yekaterinburg, he had to leave the franchise and agreed on a one-year deal with Severstal Cherepovets. After 55 games with his new team, he returned to Avtomobilist. With the Motormen, he received three calls to the KHL All-Star Game and topped the league with eight shutouts in 2014-2015. He also had several duels with his brothers Jan, especially in the years where both were playing in the Eastern Conference. One of the best players in the league’s history yet to lift the Gagarin Cup, Kovar had a couple of great chances in the last couple of seasons, when the Urals side made a push to sign high-level players, seeking to join other powerhouses in their hunt for the trophy. Avtomobilist had its ups and downs, but Kovar’s performance was always one of the best in the league. Moreover, the Czech’s stamina and resilience to injuries allowed him to play a high number of games: since the 2013-2014 campaign, no other goalies played as many matches as him, who protected his team’s crease 397 times against Koshechkin’s 359. He’s still on pace to get to 400 career regular-season games this season and perhaps even improve his record as the top scorer among goalies. However, his biggest desire, lifting a Gagarin Cup, is yet to be accomplished.