The weather in Russia is taking a wintry turn, so it was the perfect time for the KHL to head to Dubai for the latest instalment of the World Games. Closer to home, veteran coach Vladimir Krikunov is back in the game: the 71-year-old took over behind the bench at Dinamo Riga.

“I’ll always be able to say I won the first hockey game played in the UAE.”

That was Ak Bars defenseman Steven Kampfer’s assessment of his week’s work after potting the GWG in a 3-1 victory over Avangard in Dubai on Friday. The big game brought regular season action to the KHL’s 15th country and 48th city, attracting 5,150 fans to witness the unlikely sight of top-class hockey in the desert warmth of the Arabian Gulf. And the event was hailed as a hit by all concerned, from the local authorities to the KHL’s management. Avangard head coach Bob Hartley, despite his team’s defeat, described the trip as “a great victory for hockey and the KHL”.

It took some time for the game to catch fire, but midway through the second period Artyom Galimov wrote his name in the record books by scoring the first pro hockey goal in the UAE. His close-range finish set Ak Bars on the way to victory as the KHL made its first appearance in the Middle East.

The game was also a big moment for hockey in the Emirates. The country has been part of the IIHF for 20 years but the game remains an amateur activity here. For Fatima Al Ali, a stalwart of the country’s women’s team, welcoming the KHL was a big thrill — and a big inspiration.

“It’s a very huge thing for us to have this,” Al Ali said. “Anyone who is in love with hockey is here, gathering together in the same place. Our women’s national team is all here to watch today’s game.”

And they were eager to learn from seeing a different level of hockey.

“The ice is the same, but [in the KHL] the speed is different, the skill level, the mentality,” she added. “It takes time to adjust, to get to that level. I hope one day some of our Emirati players will be able to play into the KHL or the NHL.”

The trip also prompted talk of a possible new franchise based in the UAE. Prior to the game, KHL president Alexei Morozov said that successfully staging the World Games would be an important test for any potential expansion team. Later, Avangard chairman Alexander Krylov acknowledged that any club would need to rely on the local community rather than the Emirates’ 3 million expats to build support and made it clear that any team would have to sit at the pinnacle of a system that went deep into children’s hockey.

Meanwhile, Ak Bars captain Artyom Lukoyanov was all in favor of the idea of making Dubai a regular destination on the circuit: “I think every player and coach in the KHL would get behind a new team in the UAE. After all, nobody thought we could create a team in Sochi, but we did.” 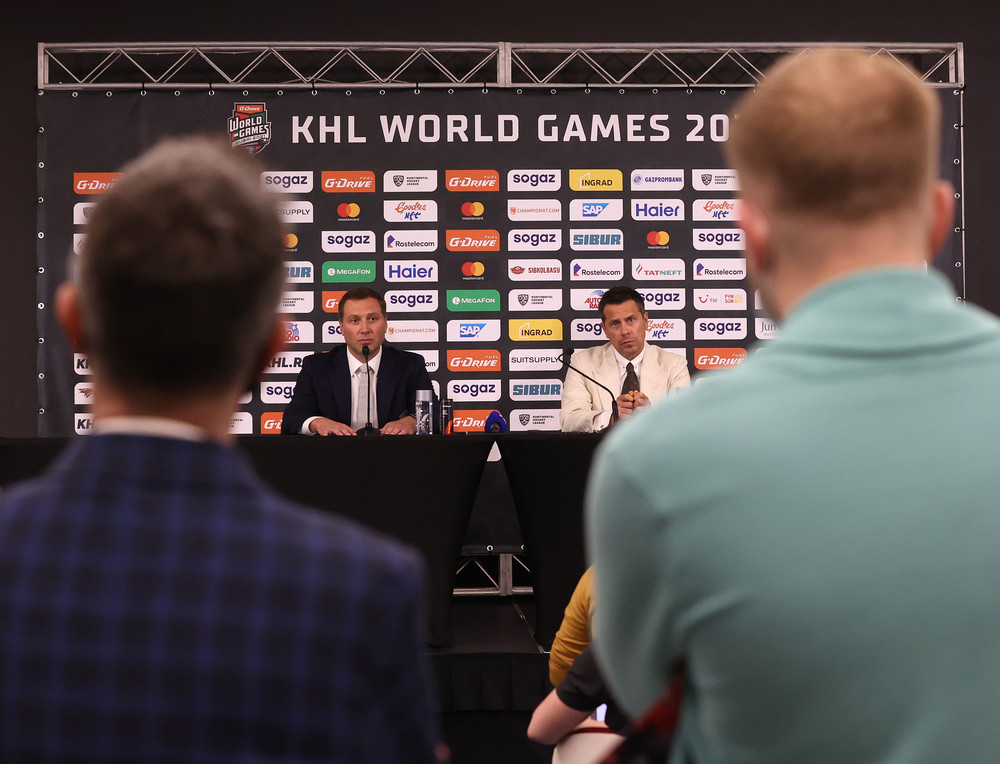 At the age of 71, many people would be looking forward to a well-earned retirement. But hockey is a hard habit to break, and Vladimir Krikunov is back in business after leaving Dynamo Moscow in the summer. His new job is at Dinamo Riga, the club he represented as a player from 1976-82. Later, his coaching career took him back to Latvia as an assistant to Oleg Znarok at the 2008 World Championship. After stepping in to replace Sergei Zubov, who left earlier this season for personal reasons, Krikunov has picked up three points in two games to lift the Latvians off the foot of the Western Conference.

Dinamo’s advance sent Vityaz Moscow Region to the foot of the standings, but that’s no reflection on the performance of Finnish forward Niko Ojamaki. He potted his 24th goal of the season in Friday’s loss to Dinamo Minsk, breaking Justin Danforth’s club record and moving him ever closer to Teemu Hartikainen’s national record for Finnish players in the KHL. The Salavat Yulaev ace potted 28 goals last season; Ojamaki is just four shy of that mark as he leads the league in goals.

Another Finnish record was updated last week when Jokerit head coach Lauri Marjamaki masterminded a 3-2 win at Vityaz and recorded his 128th victory in the KHL. That moves him ahead of Kari Heikkila on the all-time list. Jokerit’s strong form this season has the Helsinki club in a three-way tie at the top of the Western Conference: Marjamaki’s men are on 50 points, alongside Dynamo Moscow and CSKA.

Severstal was close to making it a four-way tie, but after blowing a lead against Amur on Saturday Andrei Razin’s team remains on 48 points. That loss snapped an impressive sequence of 19 games without losing in regulation — 16 wins, two overtime losses and one shoot-out reverse since Oct. 9. Despite slipping up against Amur, the Cherepovets club remains handily placed in the top four and could be this season’s dark horse in the West.