At the FONBET All-Star Game, anything can happen. Especially if your name is Gretsky. Which is why little-known Dinamo Minsk rookie Slava Gretsky is off the to the show after topping the fan voting for Team Tarasov. Elsewhere, SKA’s hot netminding prospect Yaroslav Askarov made a winning KHL debut and Barys celebrated its 20th anniversary.

Yaroslav Askarov is hotly tipped as the next great Russian goaltending talent – and the 17-year-old lived up to his potential with a game-winning performance on his KHL debut for SKA. Only Ilya Sorokin has started a KHL game between the piping at a younger age, and that by just eight days, and the Omsk native also became the first netminder born in the 21st century to get a start in the big league. However, followers of the international game already knew about the big goalie. He gained international prominence with a game-winning performance in the World U18 semi-final against the USA last season. The Americans, with the prodigious Jack Hughes leading the roster, were red hot favorites for gold; Askarov’s 40 saves in the game, plus five more in the shoot-out, ended that dream. In summer he was back on the international scene, backstopping Russia to victory at the Hlinka-Gretzky tournament.

FONBET All-Star Game – Gretsky #99 in line for an appearance

Gretzky #99 made 18 NHL All-Star Appearances in his glittering career – plus one in the WHA All-Star Series against Dynamo Moscow back in 1979. Now, Gretsky #99 is poised to make his KHL All-Star debut – and like his celebrated near namesake there’s a Dynamo connection for the Dinamo Minsk forward. The little-known 22-year-old has swept to the top of the fan poll in the Tarasov Division despite making the first of his seven KHL appearances this season. So far he’s outvoting CSKA star Kirill Kaprizov thanks to a Belarusian flashmob eager to celebrate a famous name. And while the original Gretzky All-Star outing involved action against Dynamo, Vyacheslav Gretskyis set to take his FONBET All-Star bow at Dynamo’s VTB Arena in Moscow next month. The Gretzky / Gretsky connection may not be pure coincidence, either: Wayne’s grandfather, Anton, left his native Grodno in Belarus shortly before the Russian Revolution and moved to Canada.

Fan voting for the FONBET All-Star Game finished on Sunday. For full details of the chosen players – including Gretsky – see www.allstarweek.com 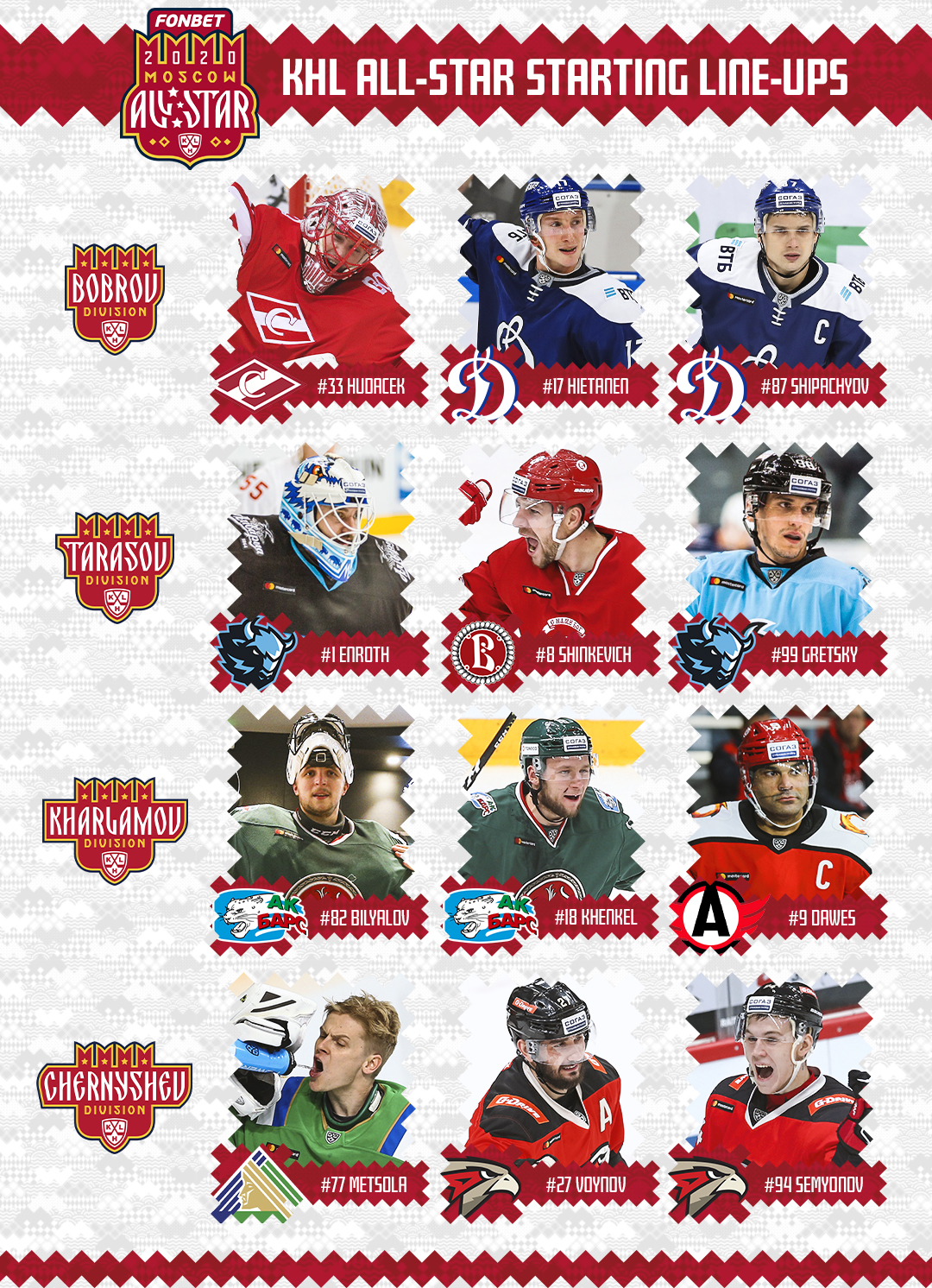 As November comes to an end, Avangard is dominating the numbers for distance covered in a single game. In the final week of the month, the Hawks had four players in the top five, with Slava Voynov leading the way on 6,842m. He was ahead of Taylor Beck, Kirill Semyonov and Sven Andrighetto but some way short of his PB of 7,965m. Sibir blueliner Andrei Yermakov came close to setting a new record for the hardest shot when he fired in a slap shot at 166.7 km/h. However, Sergei Tereshchenko’s 168.9 km/h on Sep. 15 still leads the way. 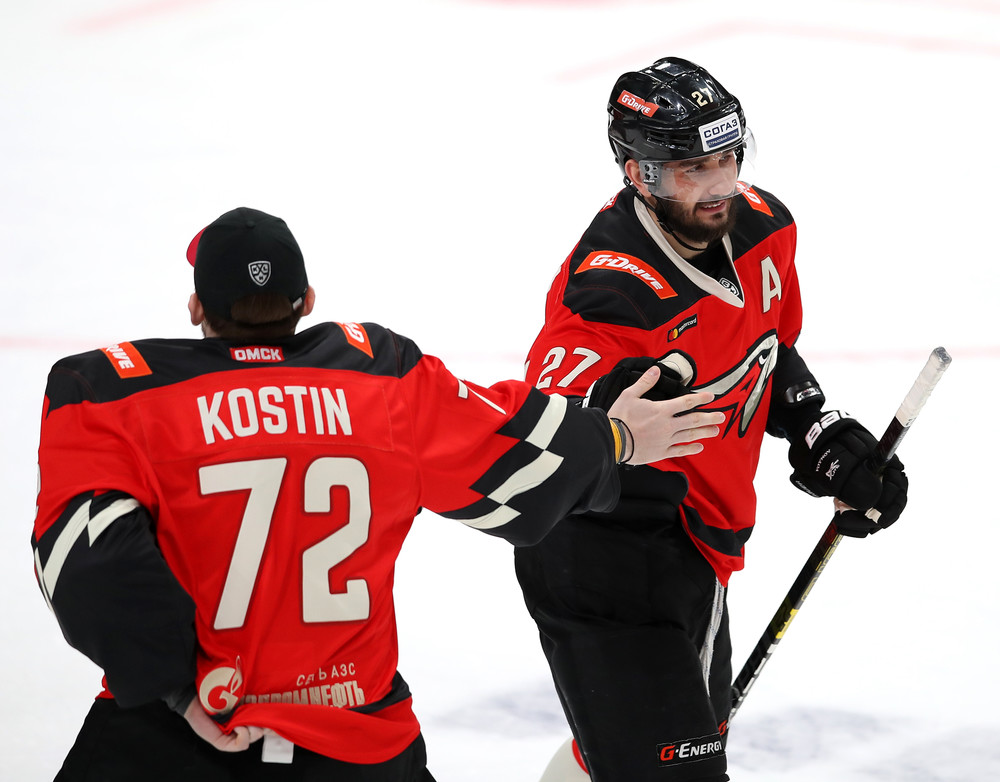 This week saw the 20th anniversary of the foundation of Barys, and Nur-Sultan was in a mood to celebrate. The team did its part, winning in Yekaterinburg to mark the team’s birthday then returning home to dismantle Dinamo Minsk 5-1 on a day of celebration. The club took the opportunity to commemorate seven of its legends, including Brandon Bochenski and Kevin Dallman, prior to the game. Jerseys hoisted to the rafters, the team took to the ice in a special uniform imprinted with the names of every player to represent the team. And a big win sent a capacity crowd home happy, with the visiting heroes of the past reassured that the club’s future is also bright.

Traktor Chelyabinsk, which picked up its first win under the coaching of Vladimir Yurzinov this week, has swapped its goalies around. Out goes Vasily Demchenko, a local lad who established himself as the team’s #1 after making his debut in the 2013/14 season. He’s placed on waivers while the club has claimed Stanislav Galimov off waivers from Metallurg. Galimov, another Chelyabinsk native, arrives with a wealth of experience. The 31-year-old was part of the Ak Bars roster that won the first two Gagarin Cups and has also represented Atlant, CSKA and Torpedo. Another goalie on the move is Emil Garipov, who leaves Ak Bars less than two seasons after winning the Gagarin Cup in Kazan.

Metallurg defenseman completed his 900th appearance in top-flight Russian hockey last week – and almost uniquely, he has played them all with one club. Born in Kasli, a small town just over 200 miles north of Magnitogorsk, Evgeny Biryukov progressed through Magnitka’s youth system and made his Russian Super League debut in 2005/06. From then on, he’s been a virtual ever-present for the team, winning two Gagarin Cups and one Super League. On November 26 he became only the second player to make 900 appearances for a single club, with Lokomotiv’s Sergei Zhukov leading the way with 959 games. The 33-year-old defenseman has contributed 126 (21+105) points so far, but was unable to celebrate his milestone with a win as Barys spoiled the party with an overtime win. 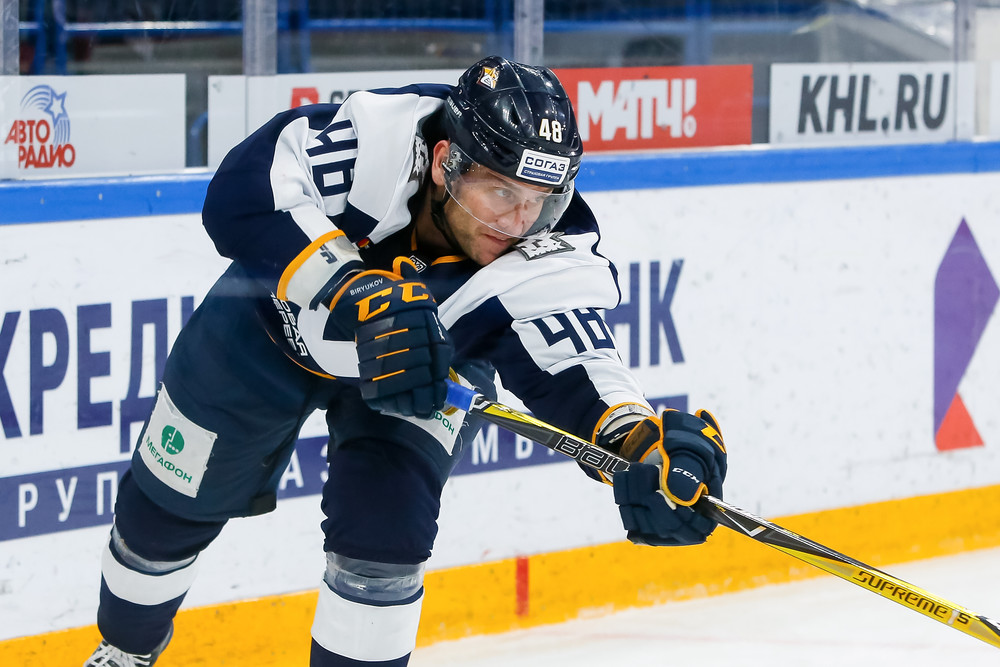