For 17-year-old goalie Yaroslav Askarov, Wednesday’s game between SKA and HC Sochi will always be a huge occasion. The teenager made his KHL debut – the second youngest starting goalie in the league’s history behind Ilya Sorokin – and made 23 saves as he backstopped a 4-2 win for the Army Men.

Born in 2002, Yaroslav Askarov is the first 21st-century goalie to play in the KHL. The Omsk native began his career in the Avangard hockey school but by 2017 he was already in Petersburg. His JHL and VHL debuts came within the SKA system and he already has some hardware from the international scene after helping Russia win U18 silver last season and gold at the Hlinka-Gretzky Cup in the summer. He favors the butterfly style, and his rapid development has alerted NHL scouts: impressed by his 6’3” frame and impressive reflexes, he’s expected to be a 2020 draft pick and has been described to former Salavat Yulaev prospect Andrei Vasilevsky, now a star for the Tampa Bay Lightning.

‘The skaters have to score goals; the goalies have to stop them’

Right now, though, the youngster is firmly focussed on SKA. “Things are moving fast, but that’s good,” he told KHL.ru after the Sochi game. “The big thing right now is not to start believing I’m a star. I need to keep working, the best is yet to come.”

However, he added that he hadn’t really taken in the significance of making his KHL debut, especially not at such a young age. “I tried not to pay too much attention to it, I didn’t want to think about it so much,” he said. “Probably in a few days I will realize just what happened.

“I tried not to think about how this was my first game in the KHL, how much responsibility I had. I just wanted to go out and play. Hockey here is still the same hockey as everywhere else: the skaters have to score goals; the goalies have to stop them. But in the KHL the game is faster and the shots are harder.”

It’s not just at club level that Askarov has impressed. On international ice he has also garnered a big reputation. Much of that comes from his game-winning performance against the USA at last season’s World U18s. The teams met in the semi-final with a Jack Hughes-inspired American roster heavily tipped to win. Not without justification: with Hughes involved, that cohort had never lost an international game in its two years together. Forty saves later, and a perfect five in the shoot-out, and Askarov ended that record and took Russia to the final.

In the summer, he was back at it again in the Czech Republic as he led Russia to gold in the Hlinka-Gretzky Cup. With 37 saves in a 3-2 final victory against Canada, Askarov helped to secure Russia’s first win at this U18 tournament since 1995. That kind of form got people talking about a possible KHL debut.

One of those people was Rashit Davydov, goaltending coach at SKA and team Russia. Davydov said back in the spring that he hoped Askarov might get a chance this season, but the goalie admitted he wasn’t being specifically groomed for top-level action. “We never had a conversation about [playing in the KHL],” Askarov said. “But he told me they were following my progress and that I needed to keep working hard and wait for things to fall into place.” 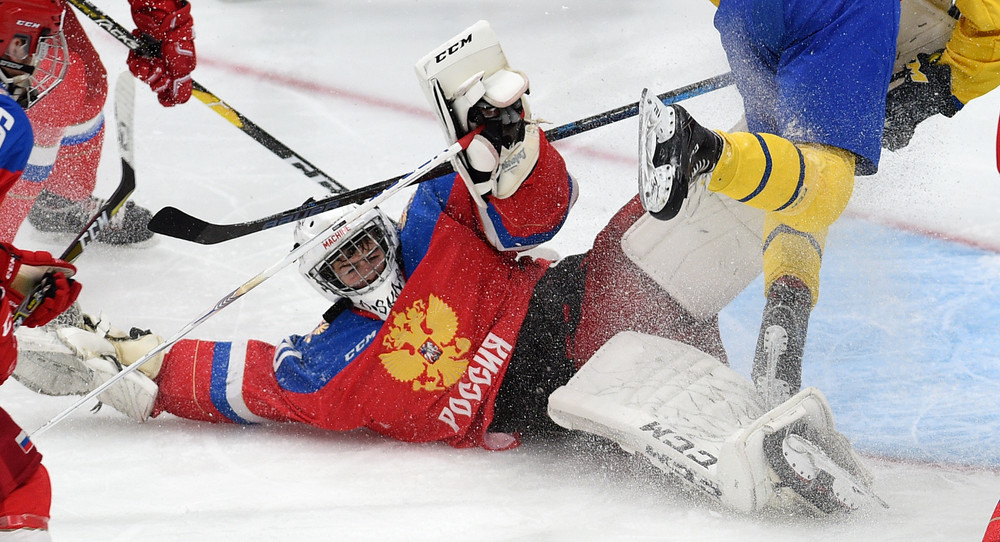 Askarov’s elevation to senior hockey is in line with SKA head coach Alexei Kudashov’s philosophy of developing young players. In his previous KHL role with Lokomotiv, he was renowned for having one of the youngest rosters in the league. His final season in Yaroslavl, 2017/18, saw the average age of the roster drop below 26 years. The season brought KHL debuts for Grigory Denisenko and Nikolai Kovalenko, among others. Earlier, he established the Kraskovsky-Korshkov-Polunin line that helped Russia win World Junior silver in 2016. The following season, that trio combined for 42 points in the KHL before an injury to Korshkov in early December slowed their progress.

The same ‘give kids a chance’ approach is now being seen at SKA. Traditionally, the Petersburg team has built its rosters by buying in top-class players. From the signings of active NHLers Maxim Afinogenov and Denis Grebeshkov in 2010 to the more recent captures of Ilya Kovalchuk and Pavel Datsyuk, big name players have been key to the team. Similarly, the Army Men earned a reputation as a finishing school for emerging stars in the KHL, most prominently the likes of Nikita Gusev (ex Ugra) or Artemy Panarin (ex Vityaz). Now, though, SKA is bringing through a host of young players of its own.

As well as Askarov, they include defenseman Danila Galenyuk and forward Kirill Marchenko. Both are just 19 years old, but Marchenko already has 5 (3+2) points from 11 KHL games (plus a shoot-out winner against Dinamo Riga) and Galenyuk’s 8-point haul matches the tally of his Swedish blue line colleague David Rundblad. Vasily Podkolzin, 18, continues to feature in the first team after making his KHL debut last season.

It’s an exciting new approach for one of the KHL’s biggest clubs and, with Kudashov also behind the bench for Team Russia this season, it hints at a big opportunity for the next generation to get its chance at the highest level as the Red Machine starts looking at replacements for some of its long-term stars. 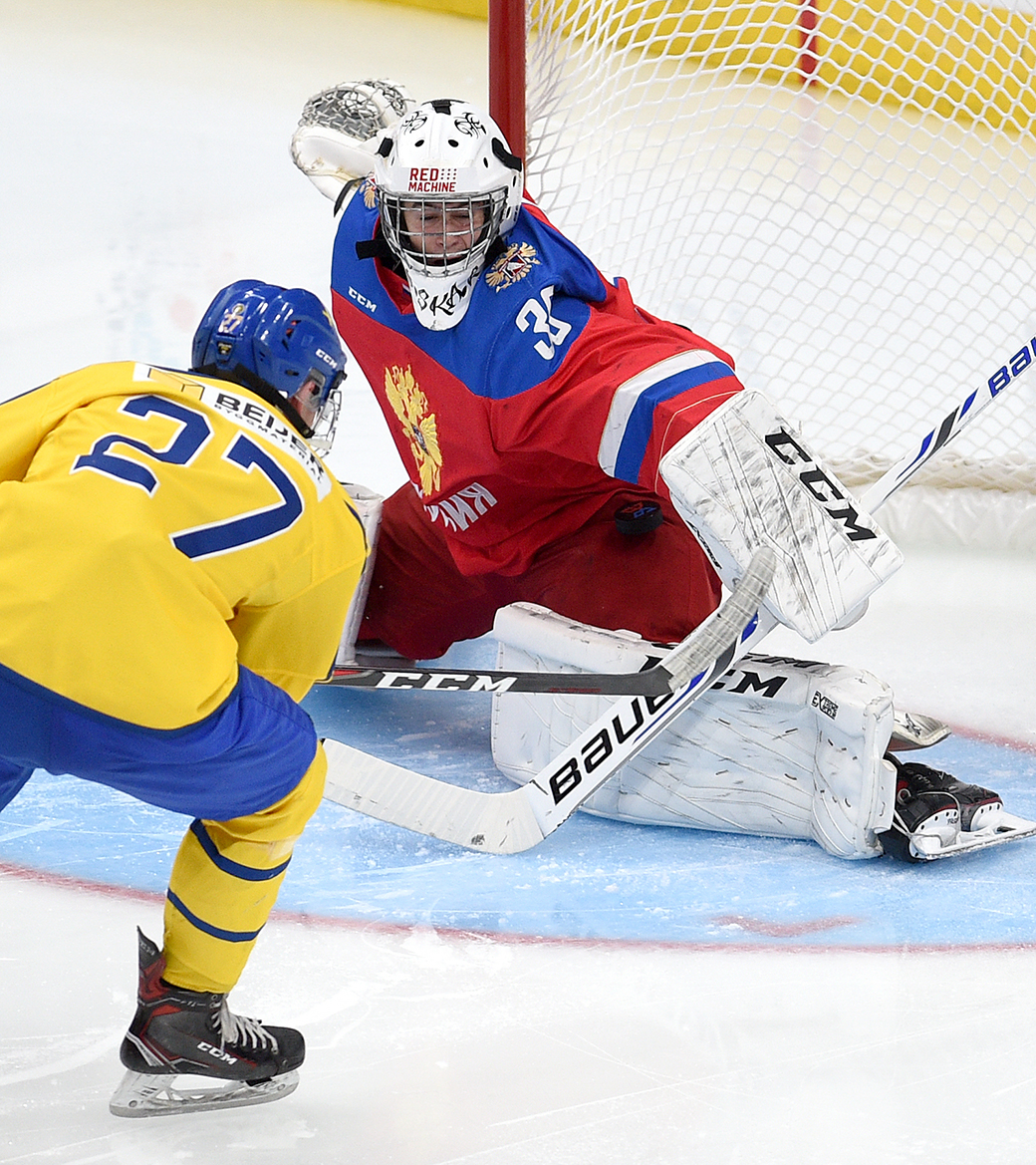