CSKA gets to the second Gagarin Cup Finals in a row. West review

After a couple of early wins, it looked like CSKA could get to the Gagarin Cup finals playing on one leg. However, the next two games proved that the reality would be very different, and the Muscovites needed seven games to reach the finals for the second time in a row.

In the first couple of games, SKA couldn’t solve the Red Army defense, scoring only two goals on Ilya Sorokin. For the Muscovites, Mikhail Grigorenko and Kirill Kaprizov kept on scoring, capitalizing on the scoring chances created often by themselves.

When the series moved to St. Petersburg, Ilya Vorobyov’s team had its back against the wall, but as the saying goes, when the going gets tough, the tough get going. After a close game ended 1-1 in regulation, forward Nikolai Prokhorkin found the right angle to send the puck past Ilya Sorokin in OT.

West: Back in the Game. April 1 playoffs

Two days later, SKA tied things up. After allowing a goal to Mikhail Naumenkov in the first period, the Army team rang the bell three times with Prokhorkin, Gusev, and Plotnikov. CSKA accumulated a few unnecessary penalties and got the game-winner with the man advantage. On the other hand, Shestyorkin was rock-solid on goal, saving his team in more than one occasion.

In game five, however, SKA couldn’t repeat the great game the team had two days before, and CSKA played an almost perfect game, scoring three unanswered goals to go ahead once again in the series. Is it over? Not even close.

In game six, SKA pulled a rabbit out of the hat and forced the Red Army to game seven after winning a memorable match in front of a packed Ice Palace, with Nail Yakupov, Nikita Gusev, and Sergei Plotnikov providing incredible performance for the Ilya Vorobyov’s troops.

SKA’s victory had only one meaning: game seven, what all the spectators wanted to see. The last game of the series wasn’t short of emotions. CSKA locked down the opposition and almost went ahead at the end of the first period when the refs ruled out a goal by Linden Vey as it came out of the 20-minute mark. In the second period, CSKA scored two goals in two minutes thanks to Linden Vey and Anton Slepyshev as SKA looked on the verge of collapse.

However, later in the second period, the Army team managed to get back to life thanks to an incredible goal by Sergei Plotnikov, who sent the puck over Sorokin’s shoulder while sat on the ice. That moment alone, however, couldn’t save the team. Vorobyov recalled Shestyorkin to the bench for an extra attacker, but Mikhail Grigorenko sealed the deal in the empty net.

“It was a tough series, seven games. I think, in the end, we deserved to win it. The guys bought into the whole program, and now we’ll prepare for the final,” Red Army commander Igor Nikitin declared after the game. CSKA had an excellent series, even if they may have lost some extra energies to cope with SKA’s furious approach. Mikhail Grigorenko is the team’s top scorer, having produced 15 (8+7) points in 16 games so far. Konstantin Okulov and Kirill Kaprizov also were productive, even if they lost some pace in the tail of the series against SKA.

Nikita Nesterov kept playing strong on the blueline – he is fresh of best defenseman nomination for the Conference Finals. Mat Robinson was also terrific, even though he probably had his best effort in the series in game six when CSKA lost 3-2. On goal, Ilya Sorokin has been rock-solid, and with Salavat Yulaev’s Juha Metsola has been the top netminder in the postseason.

Moving to St. Petersburg, SKA can’t be too satisfied with the season. CSKA was objectively the best team, and while some players delivered (Nikita Gusev and Sergei Plotnikov were excellent even against their Muscovite rivals), other not so much. Andrei Kuzmenko, Evgeny Ketov, and Ilya Kablukov, for example, posted no points in the entire postseason.

It will be a long offseason for St. Petersburg. The team will have to shuffle its deck and undergo some needed changes. A few critical players’ deals are due to expire soon – like Gavrikov’s, Gusev’s, and Datsyuk’s – and chances are good that not all of them will return.

CSKA will face Avangard in the Gagarin Cup Finals starting on April 13. 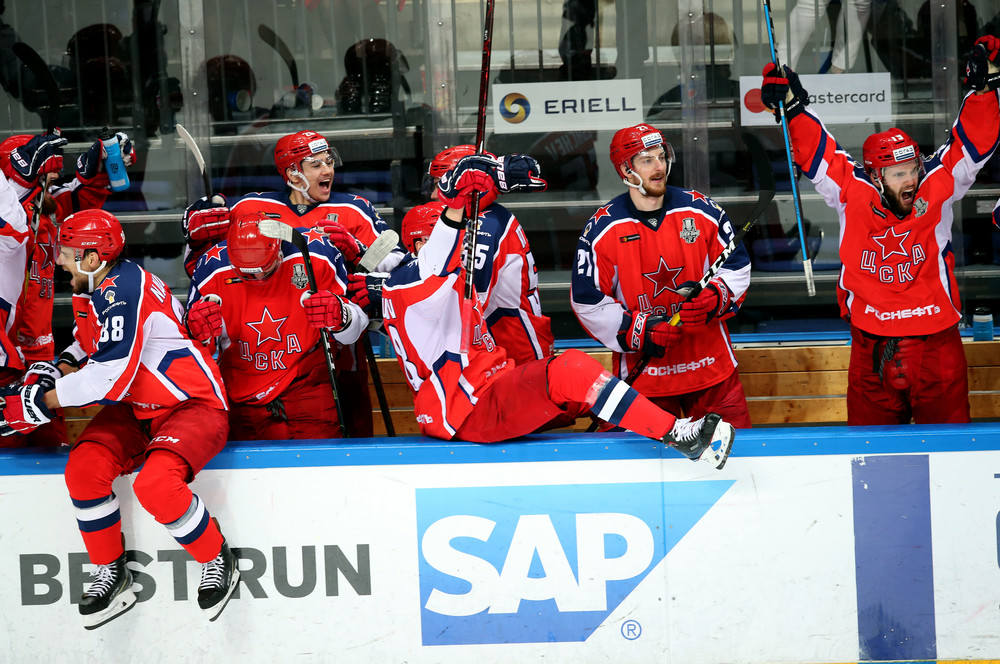