CSKA is going back to the Gagarin Cup final! A hard-fought victory over SKA in game seven finally sent Igor Nikitin’s team through a showdown against Avangard and a chance to improve on last season’s loss against Ak Bars. The Muscovites are the fourth team to reach back-to-back Gagarin Cup finals and will be out to make it third time lucky after falling to Metallurg in 2016 as well as Ak Bars a year ago.

Tuesday’s decisive game in Moscow was the culmination of a series in which every previous meeting was won by the host. SKA had to buck that trend in order to progress, which meant improving on its scoring form in the capital. In three previous visits in the Conference Final, the Petersburg men had managed just two goals – something that needed to change at the last attempt.

However, the first period illustrated once again why CSKA has been so effective in this post season, especially on home ice. Chances were at a premium, with just five shots on goal from each team. CSKA, though, did a fine job of locking down the visiting offense, while SKA was forced to block eight attempts from the host. The home fans believed they had snatched the lead as the siren sounded for the intermission when Linden Vey forced the puck home from close range on the power play. The officials, though, ruled that Vey’s shot came after the 20-minute mark and the teams went to the locker rooms with the scores still goalless.

Vey did not have to wait long for his power play goal, though. Five minutes into the second period, with SKA killing a too many men call, Mikhail Grigorenko’s shot was padded away by Igor Shestyorkin. The puck went out in front for Anton Slepyshev, who unselfishly knocked it wide to where Vey had a good look at a gaping net and gobbled up the chance to put his team in front. The officials had no complaints this time and CSKA had a toe in the grand final.

That toehold was a foothold three minutes later as Slepyshev doubled the lead. This time, persistence paid off as he and Vey battled on the slot and carved out another clear-cut chance.

It would take something special for SKA to save this game, especially considering it had never scored more than one goal against CSKA at this arena. Sergei Plotnikov provided just that on the half-hour mark. Artyom Zub’s point shot was blocked back to the slot but when the puck dropped for Plotnikov he was heading away from goal and falling under the challenge of Alexei Marchenko. Nothing daunted, SKA’s assistant captain composed himself, sat up on the ice and looped a shot back over Ilya Sorokin’s shoulder from a tight angle – an unbelievable finish and one that brought the game back to life.

However, that moment of magic could not mask CSKA’s general control of the play. SKA continued to find it hard to generate offense against a well-drilled home rearguard and Sorokin had just five saves to make in the final frame. The last act confirmed the inevitable: Shestyorkin went to the bench only for Mikhail Grigorenko to shoot the puck into the empty net with two seconds left on the clock.

Thus, CSKA booked its place in its third Gagarin Cup Final in four seasons. The match-up with Avangard begins in Moscow on April 13 and, at the end of it, a new name will be engraved on the trophy for the first time since SKA’s victory in 2015.

It was a tough series, seven games. I think, in the end, we deserved to win it. The guys bought into the whole program and now we’ll prepare for the final.

What are your thoughts about Avangard?

We’ve just come off a series against SKA! Avangard is a serious opponent. It’s got a strong roster and ambitious coaching staff. We need to take our preparations seriously from the off. They will be worthy opponents for any final.

How do you think [former CSKA forward] Sergei Shumakov will play?

For me, it’s more important how my team plays.

What have you learned from last season’s loss in the final?

Last year we used up a lot of strength in the series against SKA. It turned out that we didn’t have enough for the final. That was a big experience for us. Now we can see how much we’ve learned from it.

What prompted you to change your lines around?

In the case of Kaprizov, back in the day I spoke with Viktor Tikhonov and he talked about Fedorov and Mogilny when they were youngsters. Sometimes you need to put pressure on young players and Kirill is no exception. No matter how talented he is, he’s still a young guy. The senior players need to take on the responsibility of leading the team. As for the future, wait and see.

The second period didn’t quite go for us. In the end, that was the difference. Right now everything is still raw, we’ve only just stepped off the ice. Later we can analyze it properly.

They were running a temperature. There’s a virus affecting a few of our guys. It’s not an excuse, it’s a fact.

What did you make of the too many men call before CSKA’s opening goal?

We were changing shifts. We didn’t quite make it, maybe half a meter made the difference. But they made the decision that they made. 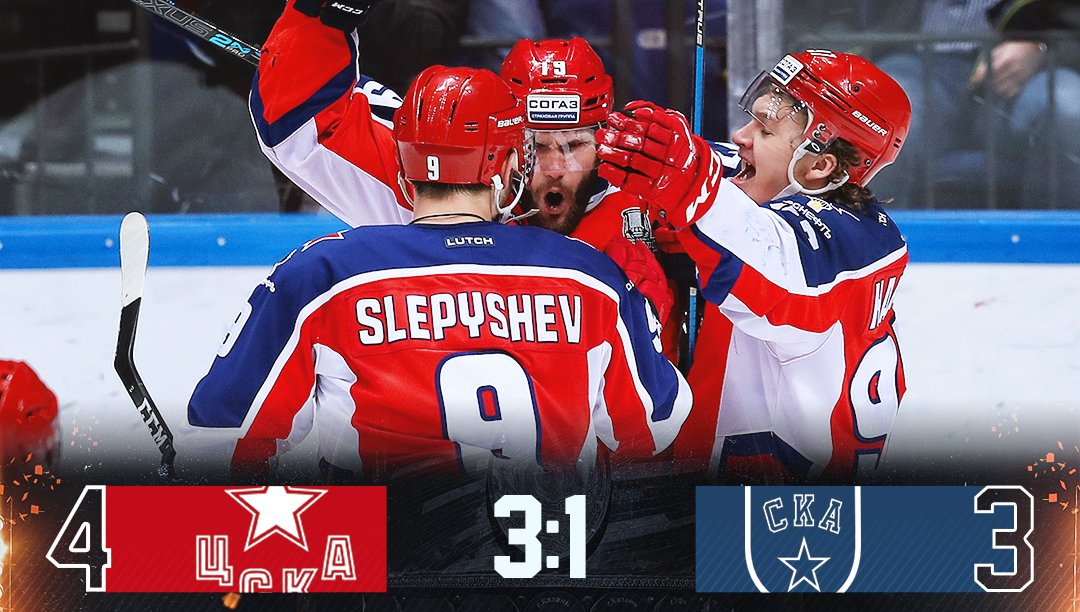