West: Back in the Game. April 1 playoffs

SKA breathed fresh life into the Western Conference final with an overtime victory over CSKA. Nikolai Prokhorkin’s goal after 12 minutes of the extras broke the deadlock – and snapped an astonishing nine-game losing streak for the Petersburg team against its Moscow rival. That run took in all four regular season encounters, three games of last season’s playoffs and the first two meetings in the current series. But, in a moment, it came to an end and threw this series wide open once again.

Mikhail Grigorenko’s attempt to clear his lines ended with Prokhorkin gathering the puck in center ice. He paused to allow to team mates to exit the CSKA zone and drove forward, seeking a shooting lane in the central position. Linden Vey attempted to check the forward’s progress, but the puck got caught up in his skates and dropped kindly for Prokhorkin to fizz a wrister over Ilya Sorokin’s pad and end this game in the home team’s favor. After two losses on the road, SKA was firmly back in business.

In common with the first two games in Moscow, CSKA concentrated on cautious defense in the early stages. The first period featured few chances at either end as the teams shared just 10 attempts on target. The visitor had a small majority of those, helped by three power play chances, but while CSKA enjoyed more attacking possession it struggled to turn that into meaningful looks at Igor Shestyorkin’s net.

That all changed in the final seconds of the frame when an uncharacteristic error from SKA defenseman Patrik Hersley let CSKA in for the opening goal. The Swede was looking to shoot the puck around the boards but mistimed his stroke and presented possession to Andrei Svetlakov. The CSKA forward was quick to react, going around the net to set up Pavel Karnaukhov with a simple finish on the doorstep. The goal was timed at 19:59; Hersley, furious with himself, stormed straight to the locker room before play could restart for a split second prior to the intermission.

But the second period saw a dramatic change in the balance of play. CSKA, as before, was limited to a handful of attempts on goal but SKA found a new dimension to its offense and got the puck to Ilya Sorokin’s net with far greater frequency. The visiting goalie faced 12 shots in the frame and was beaten by one of them. Seven minutes in, Alexander Barabanov tucked home the rebound after an Artyom Zub pass to the slot skittered bewilderingly off the skate of Prokhorkin and dropped perfectly for his team-mate to score.

Admittedly, that tying goal may have been somewhat academic had it not been for a fantastic stick save from Igor Shestyorkin early in the second stanza. Mikhail Grigorenko had the goal at his mercy when he fired in a shot but the home goalie recovered brilliantly to get a stick to the attempt and swat the puck to safety as he lay sprawled across the ice.

SKA had not scored more than once in its previous six meetings with CSKA and it needed to break that streak here to get back into the series. The home crowd believed the moment had come shortly after Barabanov tied the scores when Nail Yakupov steered home the puck from close range after Maxim Karpov stole possession in center ice and surged down the right channel. The officials, though, had other ideas, consulting the video and concluding that the goal was scored with the skate rather than the stick. The scoreline remained locked at 1-1.

Early in the third period CSKA thought that it had gone in front. Mat Robinson had the puck in Shestyorkin’s net but the officials ruled that this effort came after the whistle had stopped play. The deadlock remained and, as the session progressed, both teams adopted a more cautious approach as the likelihood of overtime loomed ever more prominent. Scoring chances became progressively more scarce and tensions bubbled over towards the end of regulation when Sergei Plotnikov and Klas Dahlback clashed in the last couple of minutes; both were called for roughing and the extras began with the teams playing four-on-four.

Overtime played out in a similar style to the second period with SKA, the team in far greater need of a victory, looking to force the tempo while CSKA contented itself with a few dangerous counter attacks. But it was former CSKA prospect Prokhorkin who dealt the decisive blow.

We surrendered the initiative in the second period. It took us a long time to recover it, and that had an impact on the outcome of the game. We didn’t play the right way and that left us overwhelmed as we struggled to cope with SKA’s fresh lines. They played well, but we didn’t take our chances in overtime.

The reason for the defeat was that second period. Otherwise, we did what we needed to do and we played a good game.

Against a team like SKA you can’t sit back and wait for a mistake, you need to take the initiative. We played well in overtime even though we took a penalty early on.

In the first period we were let down by a few penalties but after that we took the initiative in our own hands. Today we made far fewer mistakes and that’s a huge plus for the team. It’s good that we finally scored more than once. The winner was a real grafter’s goal, Kolya [Prokhorkin] did well, snatching the chance under pressure.

How did you respond to allowing a goal in the final second of the first period?

It wasn’t the nicest feeling but in the end the way we recovered from it was the most important thing.

What’s the situation with Pavel Datsyuk?

Obviously, everyone is really hoping to see Datsyuk back. Once he is ready, then he will play.

Is there a problem with his physical condition?

If he’s not playing, what other reason do you think there might be? I already answered that question in Moscow. 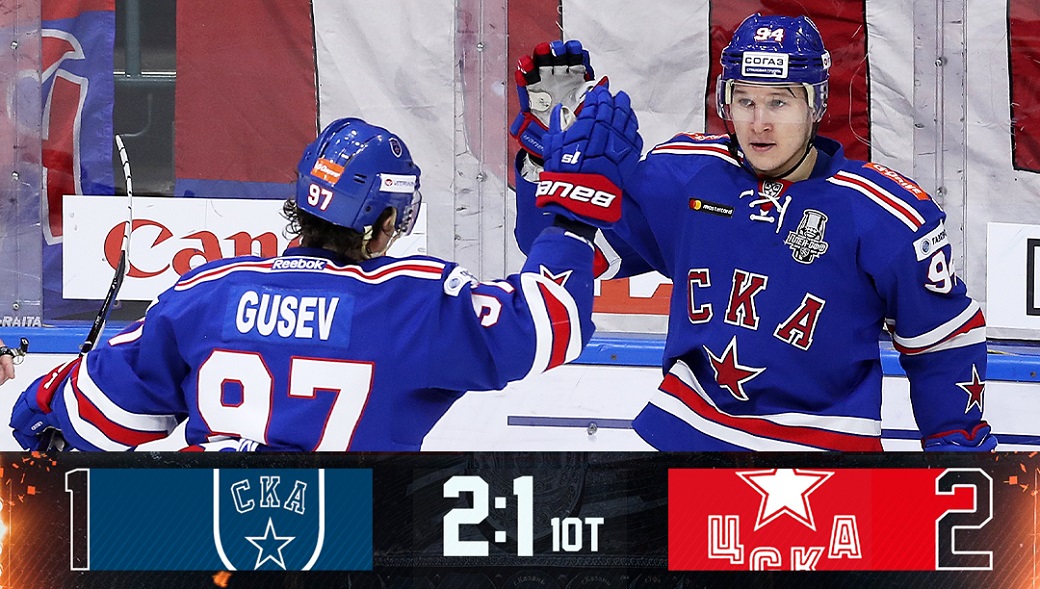