CSKA came from behind to claim victory in the opening game of the Western Conference final. The host took a 2-1 verdict over its old playoff rival SKA thanks to a Mikhail Grigorenko goal in the second period.

Both teams are gunning to make it three Gagarin Cup final appearances in five years, with CSKA representing the west a 12 months ago and SKA lifting the cup for the second time a season before that. So there was no shortage of high-pressure playoff experience on either side. However, although these sides are evenly-matched in recent campaigns, CSKA had enjoyed a run of four victories over its Army rivals this time around. There was a further boost for the host with news that SKA’s Magic Man, Pavel Datsyuk, was unavailable due to injury. For Ilya Vorobyov’s team to advance here, it would need to end that hoodoo and deliver a first win of the season against Igor Nikitin’s regular-season champion.

The visitor clearly decided that the way to achieve that was to attack. And, if that didn’t work out, attack again. The first period saw SKA on top in almost all areas: 15-6 on shots, more than twice as much possession in the opposition zone drawing two penalties to one. However, it went to the intermission tied at 1-1 thanks to a combination of fine goaltending from Ilya Sorokin and a breakdown late in the frame.

Initially, all was going well. SKA attacked from the first moments and gradually wore CSKA down. The opening goal arrived in the 15thminute – Sergei Plotnikov fed the puck back to Dinar Khafizullin and the defenseman smashed home a shot from the center point past a heavily screened Sorokin – and Vorobyov’s battle plans looked to have survived first contact with the enemy.

Then came the flub. SKA was on the power play, and on the attack, when Alexei Byvaltsev took a tripping call in the CSKA zone. The forward reacted with disbelief but the game continued with 4-on-4 and the home team made the most of its reprieve. Another SKA attack broke down on the blue line and Alexander Popov collected the loose puck. This 38-year-old forward may have flecks of grey in his beard, but he showed a fine turn of speed to race up the ice with Vladislav Gavrikov in his slipstream and beat Magnus Hellberg to tie the game.

If the first period saw SKA playing some expansive hockey, the second saw the game tighten up. CSKA wasn’t able to generate much more offense, but it did stifle the visiting forwards. Eight minutes into the action, the home team went ahead. Kirill Kaprizov took the play into the SKA zone and dropped off the puck for Grigorenko to place an instinctive one-timer over Hellberg’s shoulder. That’s seven goals and 13 points for the forward in these playoffs, and few finishes will have enjoyed quite search perfect placement beyond the goalie’s reach.

SKA still had chances either side of Grigorenko’s goal. Earlier, David Rundblad released Nail Yakupov for a one-on-one with Sorokin, but the goalie won the duel at close quarters to keep the scores tied. Sorokin was beaten in the 34th minute, but on that occasion CSKA was saved by a video review that found Anton Belov had strayed onto the paintwork as Evgeny Ketov fired home from the point.

In the third period, SKA stepped up the offense once again. Twice in the opening minutes of the frame CSKA was saved by the piping as it struggled to kill a penalty. First, Yakupov dinged one off the crossbar from the faceoff circle, then Khafizullin came close to repeating his opening goal only to find the post denying him a second marker. With the teams back at full strength, the pattern of play continued largely unchanged. SKA went on to fire 15 shots at Sorokin, Hellberg had just two saves to make. However, the home team defended stoutly. CSKA’s top line managed to hold the puck in the SKA zone for about a minute as the clock started to run down and it began to feel as if the visitor was destined to be frustrated. There was still drama to come – a too many men call late in the game put SKA on the power play with three minutes left; Hellberg left his post with 90 seconds to go – but this was to be CSKA’s day. Just. Sorokin’s 36 saves came in a game where his team-mates mustered 12 shots on the opposition net, but the goalie’s performance was enough to backstop the win and give CSKA the edge in this series.

We played well today. I can’t reproach my players for that, but we need to score more than one goal. We had to get more pucks to the net. As for the first goal against us, you saw it for yourself. Unfortunately, we gifted them a goal.

Why was Pavel Datsyuk not in today’s team?

Datsyuk has an injury. Now we’re going to think about it, make a decision, maybe change something.

Sergei Andronov said that CSKA was lucky today. Do you agree?

How can I comment on what another team says or does? We played well today, but that doesn’t change the result.

What did you think about the disallowed goal?

In situations like that, when the officials determine that the goalie was impeded, I won’t argue. What’s the point?

That wasn’t our best game. But we were decent in defense and we got the win thanks to our discpline. Today we handed the initiative to SKA, and we took penalties that really knocked us off our stride. One was playing, one was sitting; we never got our rhythm going.

With a team like SKA you cannot yield the initiative. They have too many skilled players. We need to make sure we don’t give anyone a chance on the power play. Clearly we need to focus on that.

Why was Slepyshev not involved today?

Let’s put it this way: there were guys who were 100% fit. They played. Let’s see what happens in the following games. 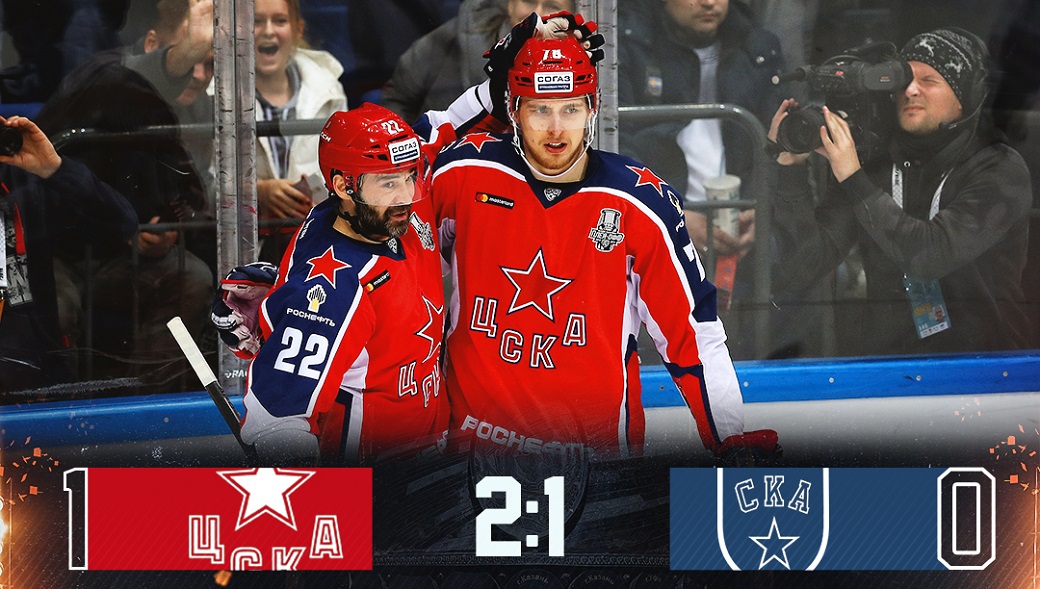