International action and late trades — the KHL week in review

On the ice, it was all about international hockey — from the Channel 1 Cup to news of Russia’s junior roster. In the KHL, the emphasis was on trades, with the final dealing before the deadline starting to heat up.

It was all about internationals this week — and it started with Russia defeating Canada for the first time since 2017. The teams met at the Channel 1 Cup in Moscow, with Canada guesting at the Euro Hockey Tour event to assess its European players ahead of the Olympics next year. Russia began the tournament with a 4-3 win over the Canadians — Lokomotiv duo Yegor Korshkov and Alexander Yelesin got the first two, 2018 Olympians Nikita Nesterov and Vadim Shipachyov scored two more — in a game the Vladislav Tretiak said “most of the country was talking about”.

However, Russia could not win its home tournament. The battle for the trophy came down to overtime in the final game against Finland and the Red Machine’s attempt to reprise CSKA’s successful trick of playing without a goalie in the extras backfired. Salavat Yulaev forward Sakari Manninen got through on the empty net, Dynamo Moscow’s Slava Voynov fouled him and, instead of a penalty shot, Finland was awarded the goal immediately due to the absence of a goaltender. Canada had one victory in three games, defeating Sweden 3-1. The Swedes also got a solitary victory against the Czechs. In total, 77 KHL players were selected for the five-team tournament.

The World Juniors start in Canada on Dec. 26 — and this year’s Russian team is drawn entirely from home-based players. It’s the first time in 15 years that no prospects currently playing in North America made the cut as head coach Sergei Zubov and his colleagues rely on the upsurge in youngsters getting their chance in the KHL. SKA has more players than any other club on the team — big names include goalie Yaroslav Askarov and forward Marat Khusnutdinov, who recently signed a contract extension in Petersburg. Record-breaking forward Matvei Michkov, who last month became the only 16-year-old to play and score for Russia’s first team, is also in the party.

The full roster is as follows: 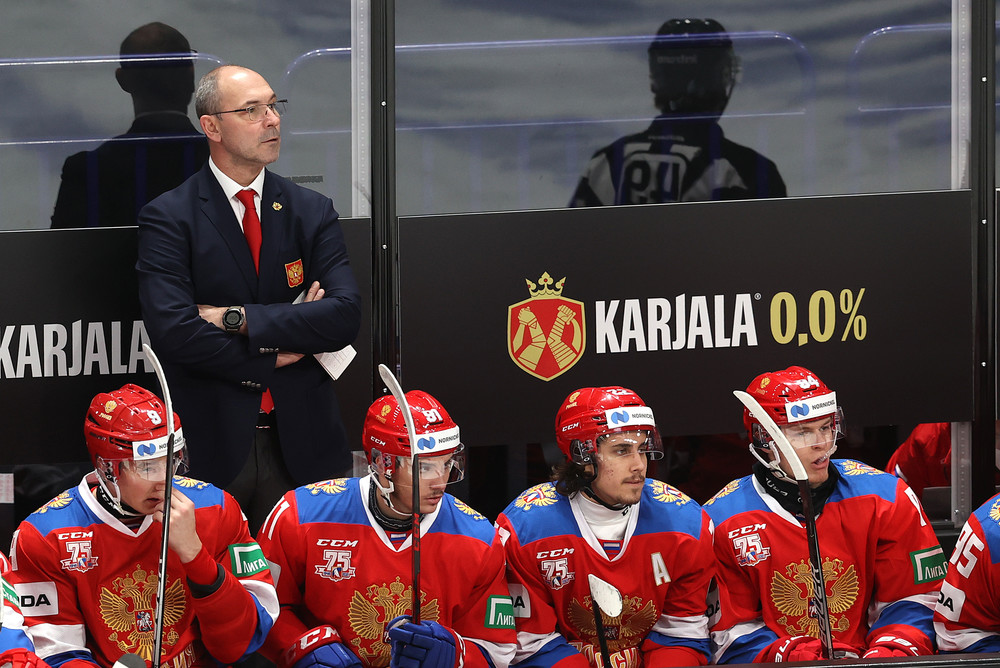 Belarus U20s won promotion back to the top division of the IIHF World Junior Championship, topping Division IA in Denmark with a perfect record. The team featured several players with KHL experience, most prominently 19-year-old goalie Alexei Kolosov. He’s played 18 games for Dinamo Minsk this season, earning rave reviews in the process, and he started all five games in Horsholm. Alexander Suvorov, another Minsk prospect, led the tournament in scoring with 11 (4+7) points from five games; clubmates Vitaly Pinchuk and Sergei Kuznetsov were also among the leading scorers. Belarus will compete in next season’s World Junior championship, scheduled to take place in Novosibirsk and Omsk in Dec. 2022 and Jan. 2023.

The final weeks of the year bring a final round of trade activity as teams make their last changes before the deadline kicks in. Avtomobilist was the first to get busy, signing Swedish goalie Johan Mattsson from Dinamo Riga and bringing home-grown forward Anatoly Golyshev home back from a short spell within the Islanders organization. Then came a defensive merry-go-round: Maxim Goncharov left Avangard, CSKA signed Darren Dietz from Barys and Viktor Svedberg joined Avangard from CSKA.

During his time at Barys, Darren Dietz was famed for his interest in the history and culture of Russia and its near neighbors — who can forget his All-Star Pushkin recital, for example? Inspired by that, the Medicine Hat, Alberta native joined up with KHL.ru’s new Imports project to dive deeper into the character of a 19th century aristocrat, complete with hunting hounds, classic literature and the all-important samovar.

Niko Ojamaki and Teemu Hartikainen were international team-mates last week. This week, though, the Vityaz man is out to take one of Harti’s records in his rookie KHL term. Niko has 26 goals this season already; the record tally for a Finnish player in one KHL campaign is 28, set by Teemu last time around. Vityaz has three games this week, entertaining Dinamo Riga (Wednesday), Sochi (Thursday) and Metallurg (Saturday). Can Ojamaki snag himself an extra Christmas present?

Shipachyov one point shy of landmark

The league’s scoring leader, Vadim Shipachyov, is third on the list of KHL scorers behind Sergei Mozyakin and Danis Zaripov. Three more points will see him to 800 in his career (and, with one point in the Russian Superleague, just two will get him there in all top-level Russian hockey). Dynamo Moscow’s captain has three chances to complete the task this week when the Blue-and-Whites take on Sochi (Tuesday), Avtomobilist (Thursday) and Torpedo (Saturday).