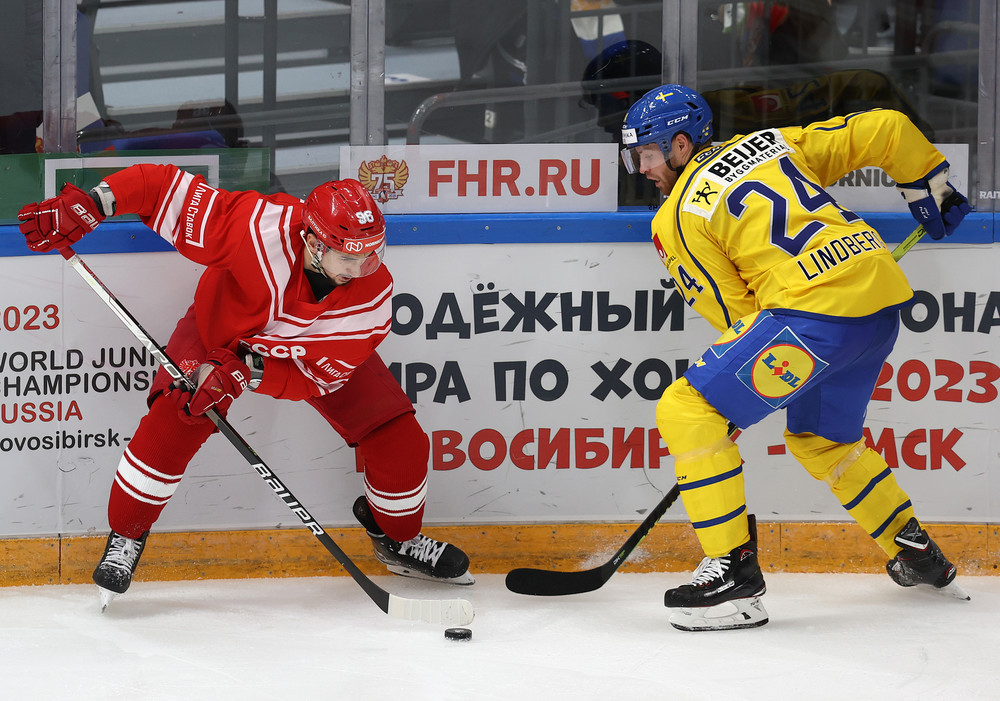 Both teams got an early power play chance, with Russia looking far more effective with a man advantage. However, neither team could break the deadlock in the first period. The Russians looked livelier, limiting the Tre Kronor to occasional counters, but Hellberg stood up well to deny Vadim Shipachyov and Andrei Chibisov, who had Russia’s best opportunities.

The middle frame was a similar story, with few clear-cut chances. Russia again failed to take advantage of a power play; Sweden managed to get more time in the O-zone but struggled to get inside the home defense. After 40 minutes, we were still awaiting the first goal.

When the deadlock was finally broken, it came in a slightly unlikely manner. Voynov is renowned as a two-way option from the blue line, but typically his contributions come from powerful point shots. Today, though, he found himself arriving at the back door to convert a well-worked move from the second line, putting away Gusev’s feed after the puck skittered through Pilut’s skates. As the game drew to a close, there were great chances for Tkachyov, Sergei Plotnikov and Kirill Marchenko to add a decisive second goal. However, Hellberg kept the outcome in doubt until the final seconds, while at the other end Fedotov finished with 34 saves to secure his shut-out.

It was a hard game, like yesterday. We tried to rotate the team. I’d like to add that in games like this you need to work without the puck, you need to be patient. The guys did their job on defense. After the second period it was clear that the first goal would be decisive.

Yesterday was emotional but today is a new game and new emotions. Sweden plays differently from Canada, they have good puck control. We tried to play tight and effective all over the ice. Sometimes it didn’t work for us but, like I said, these are the games where you have to play properly without the puck. Defensively we were much better today.

It’s a good feeling. We won, everyone did well. They gave us time to recover [after yesterday’s game]. The emotions are something new for me: a new team, new coaches, working with players like this.

It’s hard to say who is stronger out of Canada and Sweden. Yesterday was the first game for us and for Canada. We played hard. Today was a bit tougher because we had back-to-back games, but we found the strength. For me personally, it was harder against Canada, because it’s Canada and I’d never played against them before. But today’s game was also tough, they have some quick forwards.

Against Canada it was a more emotional game, today we played more disciplined hockey. The Swedes played hard for 60 minutes, but we did our jobs. I don’t know if I’ll play again here. Now we have a day off and the coaches will decide.

[On the 20-page tactical booklet described by Sergei Tolchinsky]
The booklet for the goalies has one page. It says ‘stop the puck’. That’s all! I’ve had no contact with [Olympic goaltending coach] Evgeny Nabokov. I think he has enough to worry about. So far, nobody is talking about the Olympics. Everything can still be decided at the last minute. Right now, we’re playing here, then we’ll go back to our clubs, and then everything will become clear.

It was a tough game for us and a tough one to lose. We had chances, but we didn’t take them. Overall, even though this was a painful loss, our game wasn’t too bad.

I don’t think this is the strongest team we could have selected. We had a different roster at the Karjala Cup. But this time we tried to use as many players as possible from the KHL and we added guys from the Swedish championship. If, in the end, we don’t have NHL players [at the Olympics], of course this team will change again.

I didn’t see big changes [in Russia’s game]. Maybe when we watch the video again something will stand out. But I thought Russia played its usual game. Of course, this is a very good team with many experienced and skilled players.

Obviously, it would be wonderful [to go to the Olympics]. If I could play for my country at the Games, it would be a dream come true. We have a lot of good goalies, including many in Europe. We’re all fighting for a place but I think I have a chance. I just need to always play my best hockey. I’m happy with my game today. And I have to make the most of every chance I get. Although, of course, coming back to today’s game, it would have been better if we won.

Sibir’s Harri Sateri proved unbeatable in the shoot-out as Finland began its Channel 1 Cup campaign with a tight victory over the Czechs. Dinamo Riga’s Peter Tiivola was the only scorer in the extras, giving the Finns the edge after a 2-2 tie.

The Leijonat opened the scoring midway through the first period when Sakari Manninen scored. The Salavat Yulaev man was assisted by clubmate Markus Granlund and Avangard defenseman Ville Pokka. The Czechs tied it up in the second on a goal from former Metallurg star Jan Kovar, now playing in Switzerland with Zug. In the third period, Anton Levtchi scored off a Joonas Kemppainen assist to restore Finland’s lead, only for Kovar to set up Milan Gulas for a tying goal 11 seconds from the end.