Russia began the Channel 1 Cup with a morale-boosting victory over Canada. Wednesday’s 4-3 verdict was the Red Machine’s first win over its bitterest hockey rival since 2017.

Then, as now, Canada was guesting at the Channel 1 Cup with a roster of European-based players. This year, it’s part of a ‘Plan B’ should the NHL pull out of the Olympics. For Russia, playing under head coach Alexei Zhamnov for the first time, this tournament is also a last chance to look at options outside of the NHL — either to reinforce a full-strength roster or create a home-based team as required.

The Russian roster was missing Nikita Gusev, who was suffering with a cold and is expected to return tomorrow against Sweden. However, it included six players who were on the golden roster from PyeongChang in 2018 — tonight’s team captain Yegor Yakovlev, fellow defensemen Nikita Nesterov, Alexei Marchenko and Slava Voynov, plus forwards Mikhail Grigorenko and assistant captain Vadim Shipachyov. But there was also room for new faces, including SKA youngster Kirill Marchenko, Severstal’s rising star Daniil Vovchenko and emerging defenseman Alexander Nikishin. In keeping with the Olympic theme, the team took the ice wearing retro uniforms modelled on the 1956 jerseys worn by the Soviet team that won hockey gold for the first time.

Russia got off to a great start, opening the scoring in the fifth minute. This goal was made in Yaroslavl, with Artyom Anisimov winning a face-off and sending the puck to Artur Kayumov, who set up Yegor Korshkov on the slot. Canada tried to respond in an open and entertaining first period, with Taylor Beck prominent on more than one occasion. However, by the first intermission there was just one goal in the game.

Russia was twice unable to score on its power play and, midway through the second period, Canada punished that wastefulness. Damir Sharipzyanov was called for tripping and the Avangard man watched on as Brandon Gormley quickly tied the scores on his team’s first PP of the game. However, there was an immediate response: Russia went down the ice and, after good work behind the net from Andrei Chibisov and Kirill Marchenko, Alexander Yelesin fired home a wrister from the center of the zone. Like the first, Russia’s second goal of the game went to a Lokomotiv player.

Late in the middle frame, Russia’s power play clicked at last. On the Red Machine’s fourth attempt, Chibisov provided the screen as Nesterov let fly from the blue line and beat former Slovan Bratislava goalie Justin Pogge in the Canadian net. That gave the home team an encouraging 3-1 lead at the 40-minute mark. Nesterov also scored on Canada in 2017, the last time the countries met at the Channel 1 Cup.

It wasn’t long before Russia increased its lead in the third period. Pogge got himself caught out behind the net and Kirill Marchenko picked out Vadim Shipachyov, who shot into an open goal to make it 4-1.

That wasn’t the end of the story, though. Audette pulled one back on a counter midway through the third period, and moments later Currie got clean through only to be denied by Ivan Fedotov in the Russian goal. The CSKA goalie was in for a busy end to his evening’s work — soon afterwards, Kunyk tested him as Canada belatedly raised the tempo. That late flurry brought some reward when O’Dell redirected Robinson’s effort in the 59th minute, with Pogge already called to the bench in favor of an extra skater. However, thanks to one last big save from Fedotov, Russia held on to clinch the win. 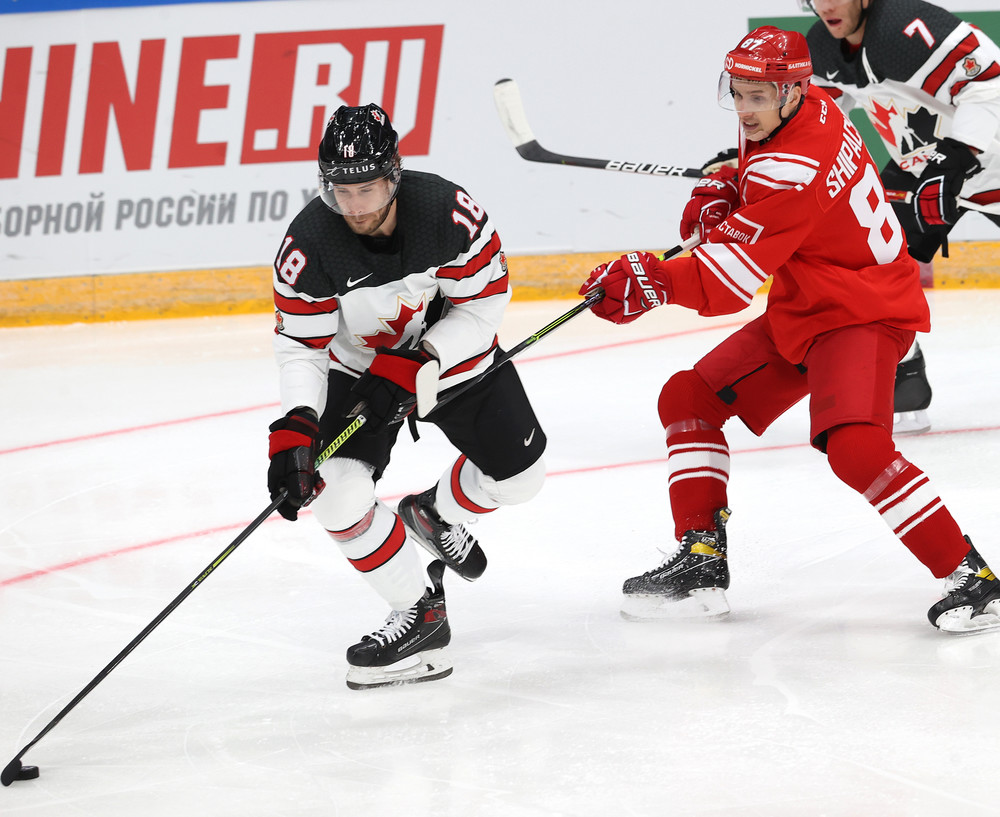 This game was a new start for us, for the coaching staff, we had a lot of new guys. Somethings worked out, the guys did what we asked. There were failures in the second period and in the third. We’ll work on it.
I wouldn’t say that Canada looked fresher in the closing stages. We started going to the net with three players and faced a lot of counter-attacks. We asked our centers always to go to the top in offense zone but for some reason that instruction didn’t always get through.

I don’t think there’s anything difficult for our players to understand. These are tactical systems, we showed the players videos of them but in one session it’s hard to take it all in. The guys did much of what we asked. We wanted to occupy every corner of the ice, not to leave gaps. In the second period we gave up the red line to the opposition, then we counter-attacked.

There are questions about the centers, but the guys worked hard and they did what we asked. Face-offs are a big problem throughout our hockey. We’ve always had this problem, we’re working on it and talking with the players. If we can win face-offs in the offense zone, that leads to scoring chances.

It’s always a big game against Canada. It’s good that we got the win. Maybe things got a little anxious at times, but then we stepped it up.

[On the strength of the Canadian team]
I think that any national team brings together the best players available at the time. They could only call on players from the KHL or Europe, but this is still a good team – they’re quick and tough, they played some lively hockey.

Today we played against a very good team, a very skilful team. The start did not go our way. But then, at 1-3, we pushed on and played some good hockey. And we got back to 3-4. In general, I liked how our players performed. We have a very good team. Yes, we didn’t have much time to prepare for this tournament but I think we’ll only get better going forward.

It was an interesting atmosphere on the team because we’re all playing in our leagues and then we came here and had to get used to each other. We started to play better at the end of the second period, we had a really good third period and I think there’s more to come.

Obviously, every kid growing up in Canada dreams of pulling on this jersey. Today’s a special day for me and my family, something I’ll remember for the rest of my life.

[on his chances of going to Beijing]
It’s mixed feelings. On the one hand, I want to see the best players representing Canada and winning medals for my country. That’s the Canadian fan in me talking. But on the other hand, as a player I’m ready to do anything for the chance to wear this uniform at the Olympics. I think that any player would jump at even the slightest chance of playing for his country and would never turn it down. So there are mixed feelings.