From Captain Tatarstan to Mr Helsinki ... — the KHL week in review

It’s been a week stuffed with individual landmarks. We’ve seen a forward move to second place in all-time Russian hockey goalscoring, a coach open the doors to the 500 club, a goalie post his 100th shut-out and a much-loved import reach 300 games.

Danis Zaripov, the oldest player currently active in the KHL, is now the second highest goalscorer in Russian hockey history. On Saturday, he potted the opener for Ak Bars in its shoot-out win at Torpedo, celebrating his 900th career appearance with his 429th goal. That moves him ahead of Soviet legend Boris Mikhailov (428) with only Sergei Mozyakin’s all-time record ahead of him.

Veteran goalie Vasily Koshechkin enjoyed a big day on Sunday. He played his 500th game for Metallurg and celebrated with his 100th shut-out in the KHL as Magnitka took a 3-0 verdict and maintained its place at the top of the standings.

That wasn’t the only big landmark of the week. Dynamo Moscow center Vadim Shipachyov potted his 250th KHL goal to help his team win the derby against CSKA on Wednesday. Only Mozyakin, Zaripov and Nigel Dawes have scored more in the KHL. It’s also Shipachyov’s 78th marker for Dynamo (he has also played for Severstal and SKA), the highest individual tally for the club in the KHL era. Today, the 34-year-old is set to celebrate his 800th game in the league when Dynamo takes on Kunlun Red Star. Nov. 22 is also the 75th anniversary of the establishment of the Blue-and-Whites, who proudly claim to be Russia’s oldest hockey club.

There was a landmark achievement off the ice as well, with Dmitry Kvartalnov becoming the first man to coach 500 wins in the KHL. He got there on Tuesday when he masterminded a 1-0 victory over Spartak. And he owed some thanks to his goalie, Timur Bilyalov, whose 34 saves protected the slender lead and earned a 20th shut-out in the league. Kvartalnov has been coaching the KHL since it was formed and has worked behind the bench at Severstal, Sibir, CSKA, Lokomotiv and now Ak Bars.

Brian O’Neill is synonymous with Jokerit. The American forward has made Helsinki his home, and his status as a cult hero at the club is secure. Last week saw the 33-year-old play his 300th regular season game for the club in that time, he’s scored 257 points, adding 15 in 31 playoff outings. O’Neill came to Finland in 2016, having made his NHL debut with New Jersey the previous season. Earlier, he helped Manchester Monarchs win the AHL, and while playing in the KHL he got the chance to represent Team USA at the 2018 Olympics.

Throughout the KHL era, SKA has been one of the league’s big hitters. A pioneer in bringing Russian stars home from the NHL, the Petersburg club went on to win two Gagarin Cups and consistently battle for the leading positions in the Western Conference. So Sunday’s 3-1 loss at CSKA was always going to be a bit of a surprise — and more so, because it’s the sixth defeat in a row for Valery Bragin’s team. That’s an unwelcome new record for the club in the KHL era, and one that the Army Men will seek to put behind them on Tuesday at Neftekhimik.

SKA current problems are not due to a lack of activity in building the roster. The club has been actively moving players in and out throughout this season, and this week saw the arrival of another big name. Leo Komarov, the Estonian-born Finnish international power forward who helped Dynamo Moscow win two Gagarin Cups, is back in the KHL after leaving the Islanders. Komarov, a fan favorite for his energetic contribution wherever he plays, made his debut in Wednesday’s loss to Lokomotiv but the 34-year-old is still awaiting his first points on his return to the KHL. 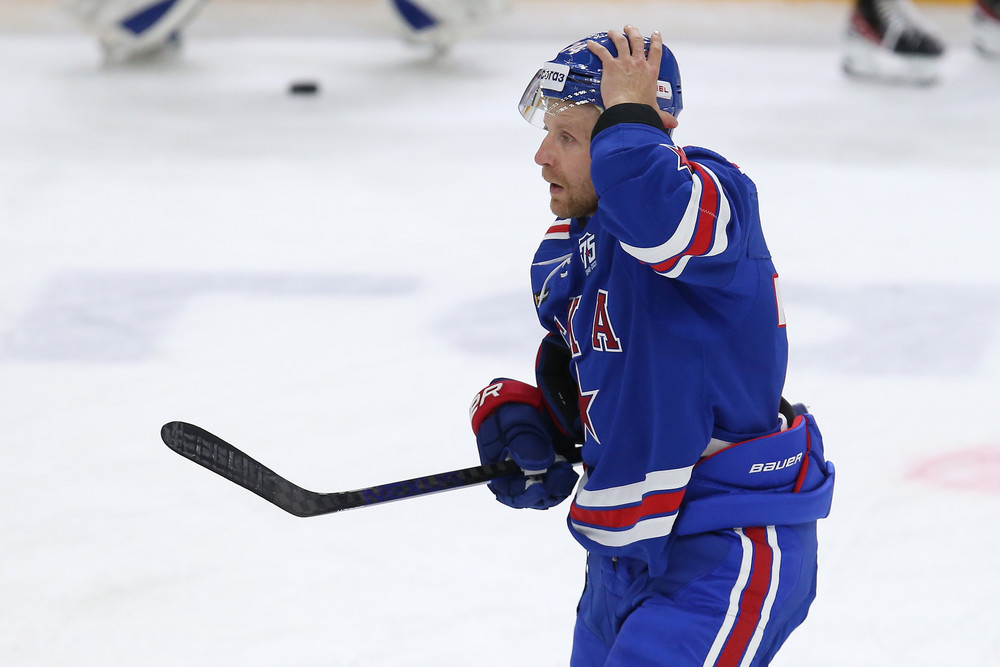 It was a good week for Lokomotiv, and for Maxim Shalunov and Alexander Polunin in particular. Both forwards scored their first hat-tricks in the KHL, and they achieved the feat just days apart. Maxim went first, with an empty net goal in Minsk sealing that notable treble in his 470th game on Monday. Then, Wednesday, Polunin followed suit when he got all three goals in a 3-1 success at SKA.