Friday’s big game saw table-topping Metallurg lose out at defending champion, while Sibir continued its run of promising form with a win over stuttering SKA. Elsewhere, Avtomobilist snapped its losing streak but Traktor missed the chance to take over at the summit after a home loss to Neftekhimik. Mikhail Grigorenko scored twice as CSKA won in Minsk, Torpedo beat Admiral and Lokomotiv got another road, this time in Sochi.

Makeyev at the double as Avto wins at last

The Motormen bounced back from a run of four successive losses after Bill Peters made big changes to his roster for Friday’s game. Brooks Macek and Danil Romantsev were scratched, while the on-going search for the most effective attacking combinations saw a new second line of Ryan Spooner and Alexei Makeyev with Georgy Belousov.

And that new-look line made an immediate impact. It took just 53 seconds for Makeyev to open the scoring and he added a second midway through the frame. The 0-2 scoreline flattered Amur, who might easily have been four or five adrift at the first intermission; a shot count of 14-3 underlined Avto’s dominance. 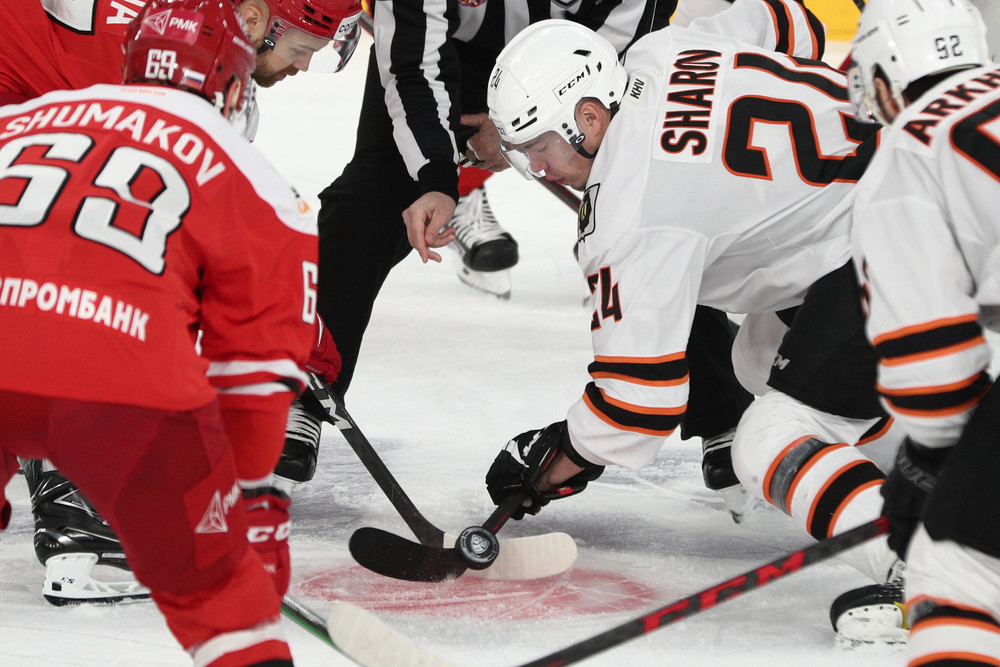 In the second period the visitor belatedly began to create its own chances, but was unable to beat Dmitry Shikin in the home net. Vladimir Butuzov and Alexander Gorshkov had good looks but were unsuccessful. At the other end, Avtomobilist was more clinical and Stepan Khripunov scored his team’s 100th goal of the season to make it 3-0.

It was difficult to see any way back for Amur in the third period and the visitor was unable to make an impression on Shikin. A power play goal for Shane Prince wrapped up a good day for Avtomobilist.

Both of these teams came into the game in good form. Traktor had won its last five and was just one point off the top of the table, while Neftekhimik had three victories in its last four to get itself into the top eight. As a result, neither head coach showed any interest in changing a winning team.

Despite a fast-paced start to the game, neither team was able to create clear chances in the first period. Traktor enjoyed the better of the action, controlling the puck for long period and pushing on the visiting defense but without getting many shots at the net in a goalless opening stanza.

That pattern continued in the second, with Alexander Sudnitsin having the busier time of it in the Neftekhimik net. At the other end, the Wolves looked to capitalize on any Traktor errors and Roman Will was twice called into action to bail out the misjudgements of his colleagues. Once again, though, neither team could find a breakthrough.

In the final frame, the clash of styles continued. This time, though Neftekhimik’s rare forays forward came with extra bite and in the 52nd minute Rafael Bikmullin skilfully finished off a counter attack to get the game’s first and only goal. Despite a final storm, the visitor held on to take the win, with Sudnitsin’s 32 saves frustrating the home offense.

Two goals from Artur Tyanulin helped Torpedo to its fourth victory in five outings as David Nemirovsky’s team looks to make the most of a six-game home stand. After a disappointing 0-2 loss against Salavat Yulaev earlier this week, the host responded well after falling behind early in this game.

Admiral struck first through Mark Verba but Torpedo quickly got on top of the game and tied the scores in the 16th minute. A home power play had just come to an end when Yegor Martynov fired the puck to the slot and Tyanulin moved it on for Ivan Chekhovich to score.

That helper inspired the 24-year-old forward and he soon had a marker of his own to celebrate. Early in the middle frame Tyanulin grabbed what would prove to be the game winner, firing home Danil Veryayev’s feed from between the hash marks.

Torpedo had a tighter grip on the game than a 2-1 scoreline suggested, and duly wrapped up the points in the third. Andy Miele got number three before Tyanulin finished off a good day’s work with an empty-net goal to seal the verdict. Now, Torpedo must quickly prepare for its next challenge: Ak Bars visits on Saturday, meaning there’s a quick turnaround for the home team.

This was Friday’s big game — table-topping Magnitka against a defending champion that was showing signs of improvement after some indifferent form prior to the international break. However, while the Hawks had enjoyed three straight wins, there were grounds for continued doubt: defeating Kunlun Red Star (twice) and Vityaz, two teams at the foot of their respective conferences, was hardly proof that Bob Hartley’s team was over its recent stutter. Today promised a more rigorous test — and Avangard passed it.

Like any true test, Avangard was forced to contend with adversity. Twice, the home team fell behind. The first was a combination of the sublime and the ridiculous: sublime, in terms of Nikita Korostelyov’s audacious flick between his own legs to beat Simon Hrubec; ridiculous in the shape of the schoolboy error from Maxim Goncharov that presented him with the puck in the heart of the Avangard zone. Few would be more relieved than the defenseman when Nikolai Prokhorkin tied the scores, finding a way past his former team-mates late in the first period. 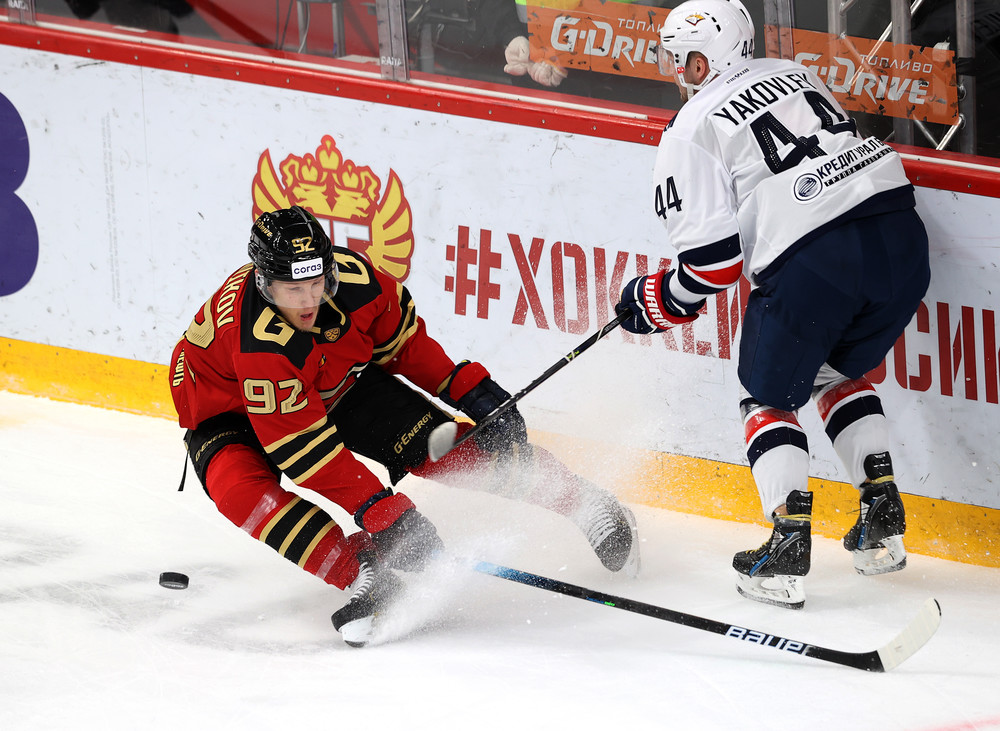 That narrative repeated in the middle stanza. Metallurg regained the lead on a power play goal from Andrei Chibisov and again, late in the session, Avangard responded through Corban Knight. Arseny Gritsyuk’s assist on that play extends his productive streak to four games since his return from injury.

Oliwer Kaski has also been picking up the points lately and he made it four in four games with a power play effort midway through the third. That put the Hawks ahead for the first time in the game, and after Hrubec made a big save to deny Yegor Yakovlev a tying goal with five to play, Pavel Dedunov’s empty net effort sealed the win. Avangard maintains its winning streak; Metallurg, like fellow high-flyer Traktor, goes into the weekend on the back of a loss.

In-form Alexander Polunin was on target again as Loko moved to four wins from five. The forward has 10 goals this season, and five of them have come in the last four games. Those stats are boosted by a hat-trick in Wednesday’s 3-1 victory over SKA and today he scored again as the Railwaymen repeated that scoreline at Sochi.

Polunin’s goal came early in the third period when he redirected Maxim Osipov’s point shot past Magnus Hellberg in the home net. By that time, though, Loko was already in front. Maxim Beryozkin opened the scoring in the 15th minute and Rushan Rafikov extended that lead on the power play early in the second.

The home team gave itself some hope midway through the middle frame when David Rundblad got a power play goal at the other end. However, Andrei Nazarov’s men continued their recent habit of alternating wins and losses; this result leaves the Leopards in 11th place in the West, two points ahead of Vityaz.

CSKA bounced back from its defeat in the Moscow derby to beat another Dinamo on the road in Belarus. Mikhail Grigorenko led the way for the Army Men, grabbing two goals to swing a high-scoring encounter in the visitor’s favor.

Things started well for the Muscovites, who jumped into a two-goal lead through Sergei Andronov and Maxim Sorkin. But Ilya Shinkevich pulled one back for Dinamo late in the first period, and CSKA’s dominance of the opening frame added up to just a solitary goal.

That success lifted the home team. After CSKA outshot its host 15-3 in the first period, the tables were turned in the second with Minsk enjoying a 9-3 advantage. However, Adam Reideborn kept the Bison at bay and, at the other end, Grigorenko made the most of his chance. The Russian international grabbed a well-worked power play goal late in the stanza to restore his team’s two-goal advantage.

When Alexander Popov made it 4-1 seconds after the intermission, it seemed that the game was done. Dinamo had other ideas, though, and hit back with two power play goals in quick succession. Semyon Pankratov and Bogdan Kiselevich went to the box, Pavel Varfolomeyev and Malte Stromwall hauled the host back into contention.

However, a minute after making it a one-goal game, Dinamo found itself on the PK and Grigorenko again meted out the punishment. Once again, he found space in the right-hand circle and rifled home a shot to take the pressure off his team. Now, Dinamo’s discipline unravelled and late in the game Joakim Nordstrom completed the scoring with a goal on a double power play.

SKA’s unhappy recent run continues after Valery Bragin’s team blew an early lead to lose at home to Sibir. For the visitor, this is a fifth win in six games, delivered on the strength of two goals in the final seven minutes.

Following a run of four straight losses, SKA made changes. Some are permanent, with Yury Pautov and Danila Galenyuk leaving for Sochi, while others should be temporary as young forwards Ivan Morozov and Kirill Marchenko went with the farm team on its latest road trip. That opened spaces for seven new faces compared with Wednesday’s home loss against Lokomotiv — but it didn’t trigger an instant change in fortune. Instead, a fifth successive defeat set an unwanted new record for SKA in the KHL era.

It might have been different. After a sluggish start to the game, Andrei Kuzmenko gave the Army Men an eighth-minute lead. Despite the high profile arrivals of Nikita Gusev and Leo Komarov, Kuzmenko remains the team’s most consistent threat this season and his combination with Anton Burdasov and Joonas Kemppainen looks to be untouchable for his club.

However, despite dominating the play, SKA was unable to build on that lead. The next goal was a long time in coming, and the more the home team fluffed its lines in front of Anton Krasotkin’s net, the more the pressure intensified. Eventually, Sibir got its chance. A power play midway through the third did not bring a goal, but produced a shift in momentum that helped Ilya Morozov tie it up second after Valentin Zykov returned to the fray. Then, in the 58th minute Nick Shore potted an unexpected winner. Oleg Li fired the puck in the from the point, recent signing Anton Shenfeld steered it behind the net and Shore emerged to score on the wraparound.