Ak Bars head coach Dmitry Kvartalnov is the first to win 500 games in the KHL thanks to his team’s 1-0 success at Spartak. Elsewhere, Sakari Manninen scored twice as Salavat Yulaev won at Torpedo, and Sochi scored five on Barys.

Prior to the international break, Torpedo enjoyed three successive home victories. Today’s visitor, though, was still smarting after being obliged to forfeit its most recent scheduled game due to an outbreak of illness in the team ahead of the meeting with Traktor. With most of the affected players available once again after the pause, Tomi Lamsa’s team had a point to prove — and some ground to make up on the Eastern Conference leaders.

Torpedo welcomed back fit again center Marek Hrivik, whose return prompted a reshuffle of the attacking lines to accommodate him. The club was also able to welcome spectators back into the arena following a relaxation of local COVID restrictions, and the 1,700 permitted to visit the game were treated to a lively first period with the home team frequently testing Juha Metsola in the Ufa net. However, the opening goal went to the visitor: Sakari Manninen, one of those back in the team with a clean bill of health, broke the deadlock in the ninth minute. 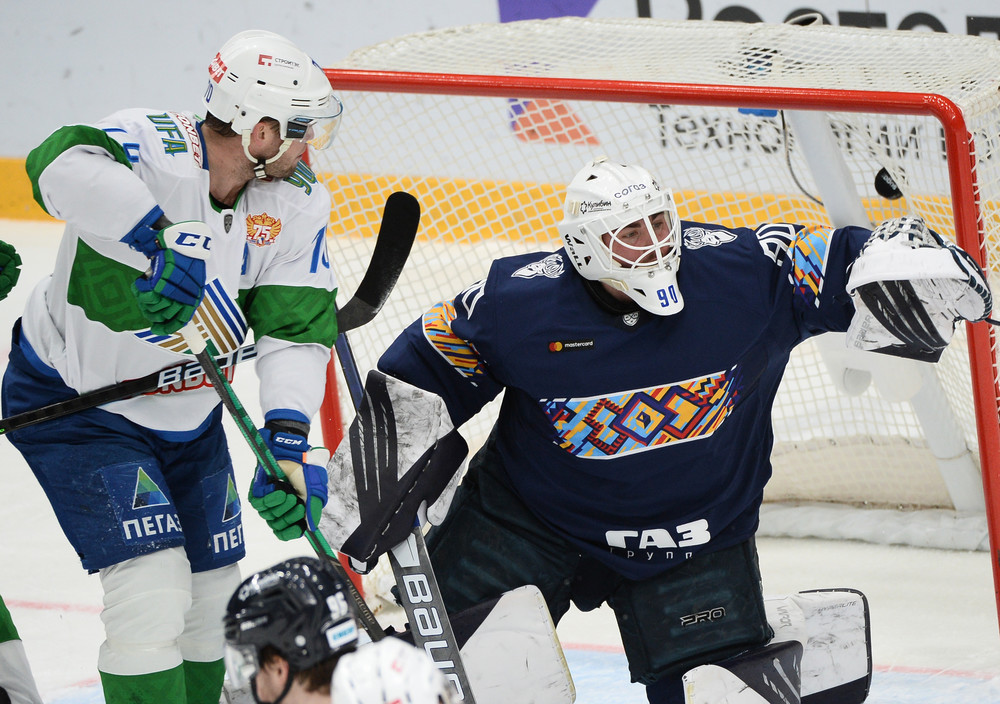 Immediately after the intermission, Salavat Yulaev offered a generous reprieve to the host. Goalie Andrei Tikhomirov was caught way out of position, but Philip Larsen and Markus Granlund opted not to shoot and politely waited for him to return to his net. Subsequently, Torpedo looked much the livelier of the teams, outshooting the visitor 15-3 in a goalless middle session.

The home team continued to have more of the play in the third, but Metsola was in terrific form and finished the day with 39 stops to record his shut-out. At the other end, Tikhomirov also did well but he was beaten by Manninen again in the closing stages as Salavat Yulaev took the win.

Spartak came into the game looking to improve on back-to-back losses. The home team had early chances to get in front here, with Ak Bars taking a couple of penalties in the first 10 minutes. The upshot was plenty of Spartak pressure, but no home goal. And when Ak Bars managed to lift that pressure, the visitor grabbed the opener in spectacular fashion. There seemed to be little danger when Nikita Dynyak grabbed a loose puck in his own zone and looked to carry it out of trouble. But as the 24-year-old advanced down the left flank, the ice opened up before him. Suddenly, Dynyak had a scoring chance and, after cutting inside and beating Jakub Jerabek, he finished with aplomb. 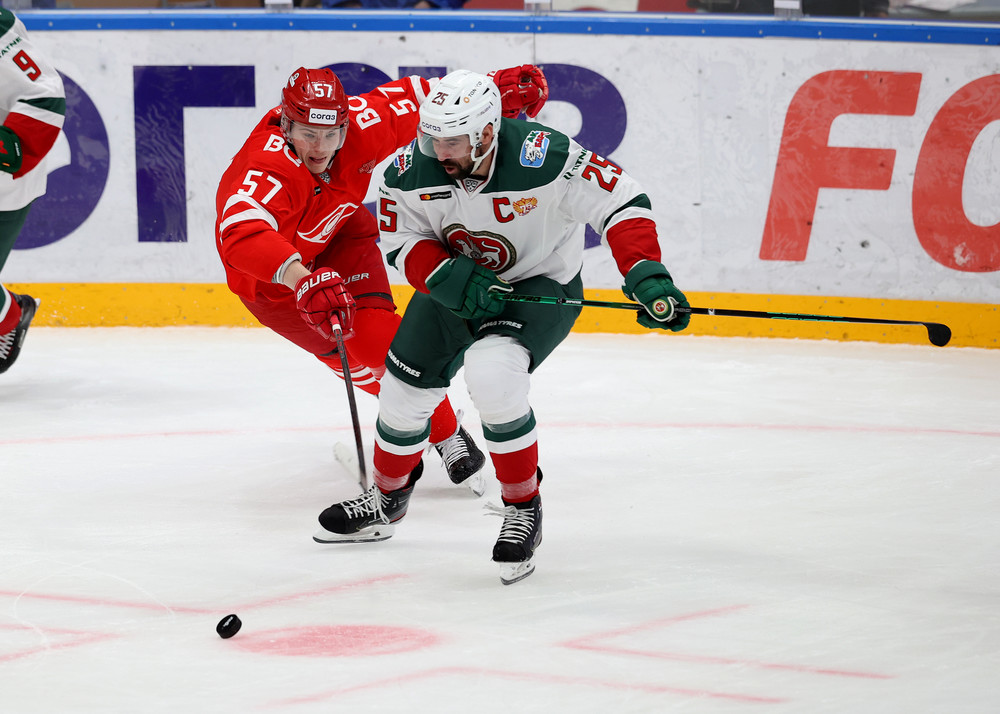 In the second period the teams exchanged penalties but produced few clear-cut chances. Neither side was able to generate much with its power play and one of the best chances of the frame fell to Spartak’s Maxim Tsyplakov on the PK midway through the session.

The third period began with Ak Bars again failing to take advantage of a power play. Subsequently, Spartak created more opportunities as it looked to find a way back into the game but Timur Bilyalov in the visitor’s net was in assured form as he made 34 saves to record his 20th career shut-out. He was beaten late on by a rocket from Dmitry Vishnevsky as Spartak tried to make its power play work in the closing minutes, but on this occasion the crossbar came to the rescue. On 58:14 the home team called a time-out and brought goalie Alexei Krasikov to the bench in favor of a sixth skater. For a time, there was even a 6-on-4 advantage after Nikita Lyamkin shot the puck out of the rink, but Ak Bars held on to record a landmark win for the head coach.

Both teams added reinforcements to their forward lines ahead of this game, but it was Sochi’s newcomers that made the bigger impact to send Barys spinning to a third straight loss.

Barys was outside of the playoff places going into the international break and responded with some efforts on the transfer market. Slovakian forward Tomas Jurco is entirely new to the KHL, having previously played 221 games over seven seasons in the NHL. He joined Linden Vey on the top line after the 30-year-old Canadian returned to his first KHL team after spells at CSKA and SKA. Finally, Kazakh international forward Anton Sagadeyev slotted into the fourth line after his summer switch to Lokomotiv did not work out.

Sochi, too, had new faces: Forwards Artyom Zhuk and Alexander Gordin arrived from SKA, and the latter slotted straight into the first line. The 20-year-old made his first and only appearance for SKA last season, but marked his Sochi debut with a goal early in the second period. That effort extended the home team’s lead to 3-0 after first-period markers from Artyom Nikolayev and Kirill Melnichenko. Young Melnichenko was another celebrating his first KHL goal for Sochi.

It all added up to a familiar feeling of struggle for Barys, but in the second half of the game the visitor began to turn things around. Two goals in five minutes as the middle frame came to an end brought the Kazakh team right back into contention: old favorites Curtis Valk and Roman Starchenko did the honors to reignite this contest.

Home nerves were eased at the start of the third when JC Lipon made it 4-2, Melnichenko among the helpers for this one. And the outcome was settled when Ivan Mishchenko made it five with six minutes to play.