The KHL returned to action in style — four games going to overtime, a 10-goal thriller and a fightback from 0-4. Personal highlights included a hat-trick for Maxim Shalunov, back-to-back shut-outs for Simon Hrubec and three assists for Nick Bailen; the team triumphs included four straight wins for Sibir and a table-topping derby win for Traktor.

The first action of the day came from Siberia, where two teams in the race for a top-eight finish battled it out. Going into the game, the opponents were two points apart with Sibir seventh in the east and Neftekhimik ninth. Both teams had to make changes: the host was without Ilya Morozov and Dmitry Ovchinnikov, both of whom were traveling back from international duty. Neftekhimik was without the injured Pavel Poryadin and handed debuts to Denis Vikharev and triallist Sergei Kuptsov.

The visitor’s new faces made a big impact on the game. First, Kuptsov set up Vikharev for the opening goal after 13 minutes. Then, in the second period, Kuptsov scored himself to restore Neftekhimik’s lead after Vadim Kudako tied the scores. However, the home team recovered to make it 2-2 just before the second intermission when Evgeny Chesalin fired in a shot from the boards.

After that, there was no more scoring, although Harri Sateri played a big role in denying Neftekhimik an overtime success. Then, when it came to the shoot-out, the Finnish goalie proved unbeatable as Alexander Sharov potted the gamewinner for Sibir. The home team extends its winning streak to four games and moves three points clear of today’s opponent.

This South Ural derby was a top-two battle, with host Traktor looking to close on its local rival at the Eastern Conference summit. And, with a three-point game from Nick Bailen separating the teams, Traktor succeeded in handing table-topping Metallurg a third straight loss. Just one point now separates the two.

In the early stages, both teams were happy to fire in shots from all angles in a bid to find a way past Roman Will or Vasily Koshechkin. Traktor looked the sharper of the two, however, getting more shots on target (19-9) and winning more face-offs (12-7). Finishing let the home team down, though, and in the final minute of the frame Metallurg stole ahead on a breakaway goal from Andrei Chibisov. 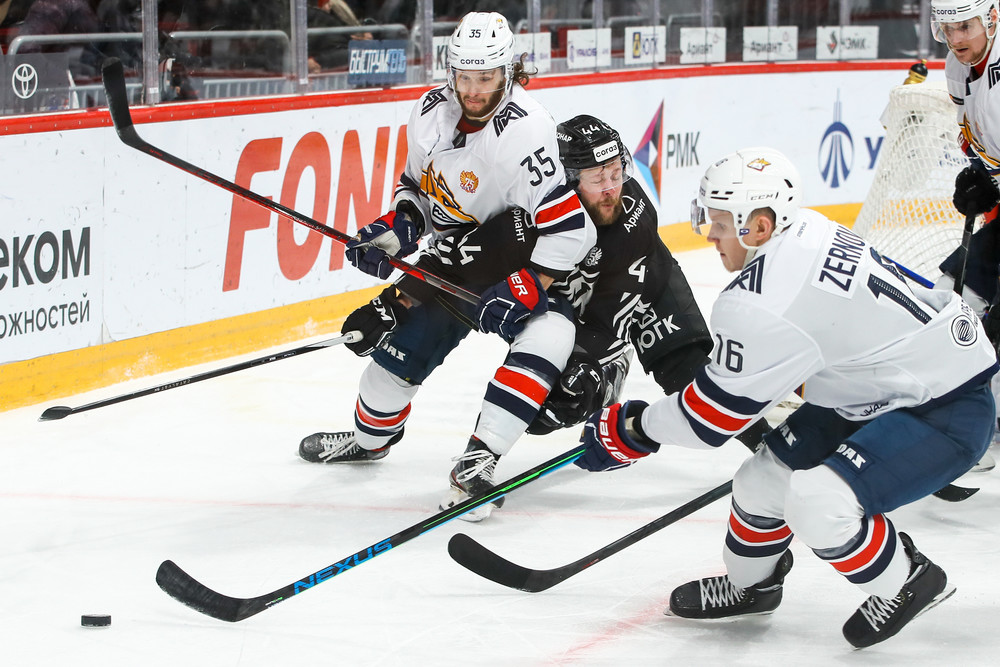 The second period saw Traktor get the rewards for its dominance. The Sedlak-Tertyshny-Abramov line was effective throughout and, with Bailen pulling the strings from the blue line, they turned the game around. The Czech forward got the first, then Nikita Tertyshny — fresh from his international debut at the weekend — made it 2-1.

Metallurg managed to tie the scores in the third period when Brendan Leipsic raced onto a magnificent feed from Nikolai Goldobin to make it 2-2 with 10 to play. Those remaining minutes saw the visitor come closer to winning it, but Magnitka took a penalty just before the hooter and that proved costly. In overtime, Traktor converted its power play with Bailen completing a hat-trick of helpers as he set up Vladimir Tkachyov for the decider.

Maxim Shalunov hit a hat-trick in a high-scoring game in Minsk as Lokomotiv had the better of a fiery encounter.

The two teams delivered a statement of intent at the start of this game. Almost immediately, Maxim Osipov and Roman Gorbunov got into a fight — and their confrontation gained an unappealing reflection as two groups of rival fans tussled in the tribune. Osipov collected two major penalties for his troubles, one for interference, the other for fighting. Gorbunov was assessed 2+10 as the instigator, and got his own major for fighting. The upshot was two minutes of 4-on-4 hockey, followed by a Dinamo power play for the remaining three minutes of Osipov’s penalty.

And that sequence produced three goals. First, Daniil Misyul gave Lokomotiv the lead with the teams at equal strength. Seconds after that, though, Dinamo got its power play and Dmitry Korobov tied it up. However, Osipov remained in the box — serving a major penalty — and Minsk took advantage with a second goal, this time from Malte Stromwall. Despite scoring twice, the home team had just four shots on target in the first period; Loko’s greater offensive intent was rewarded when Maxim Shalunov made it 2-2 after 13 minutes.

The start of the middle session was almost as explosive. Lokomotiv stayed out of trouble and blasted two quick goals. Artur Kayumov and Mikhail Belyayev found the net and the visitor held an imposing lead. Shalunov added his second of the game, this time on the power play, to extend that advantage. Late in the frame, though, penalty trouble for Loko gave Dinamo a 5-on-3 advantage and Stromwall potted his second of the game to keep the intrigue alive going into the break.

In keeping with the bad-tempered theme of the game, both teams continued to trade penalties in the third period. And when Taylor Beck sat for tripping, Loko finished off the job with a power play goal from Denis Alexeyev to make it 6-3 with five minutes to play. There was still time for Shalunov to complete his first ever KHL hat-trick with an empty net goal to finish off a 10-goal thriller.

This is a big week for Kunlun and Team China. The Dragons’ games against Amur and Avangard are under the scrutiny of the IIHF, with China’s place at the upcoming Beijing Olympics under review. As a result, the KHL agreed to postpone the suspension of Red Star captain Brandon Yip until the weekend.

At first, though, Yip’s presence seemed unable to suppress Amur. The visitor had the better of the first period and deservedly led at the intermission thanks to Alexander Gorshkov’s breakaway goal. It got even better for the Tigers at the start of the middle stanza, as two goals in 21 seconds stretched that advantage to 3-0. A spell of penalty trouble did little to perturb the visitor and midway through the game Svyatoslav Grebenshchikov grabbed his first goal since arriving from Vityaz. The game was in danger of turning into a rout — and one that could prove costly for China’s Olympic dream.

Enter Yip. In the 36th minute, he got his team on the scoresheet. The captain took control of a broken play after Ethan Werek ran into traffic on his way into the O-zone and charged forward to beat Evgeny Alikin from close range. Within a minute, Mikhail Abramov’s defense-splitting pass released Josh Nicholls to make it 2-4 and the game was back on. Yip came close to a third before the intermission, but his latest surge was halted by Alikin to calm some of the nerves on the visitor’s bench.

At the start of the third, Amur was clearly looking to slow the game down and play to the scoreboard. However, midway through the session, Abramov fired home from the back door to make it a one-goal game and, almost immediately, Ryan Sproul stuffed in the rebound after Tyler Wong and Spencer Foo caused chaos in front of Alikin’s net. From 0-4, the Dragons had saved the game and we were heading for overtime.

At this point, the script demanded a home winner to complete the story. However, Amur rallied and got the decider through Radan Lenc. For the visitor, it’s two vital points in the race for the playoffs; for the home team, it’s a display of heart and resilience that could be vital in persuading the game’s governing body to welcome China to its own Games next year.

Severstal’s journey up the Western Conference standings has been one of the stories of the season so far. Head coach Andrei Razin has deservedly gathered plaudits as his team, assembled on a tight budget, proves that it can mix it with any opponent. Today’s trip to CSKA saw the Steelmen looking to break into the top four at the expense of one of the game’s elite clubs.

The first period was tight, with the teams exchanging just 11 shots on goal in the opening session. However, Ilya Khokhlov made sure that one of them counted, firing in a beauty of wrist shot from out on the boards. The puck whistled through traffic and beat the unsighted Ivan Fedotov. 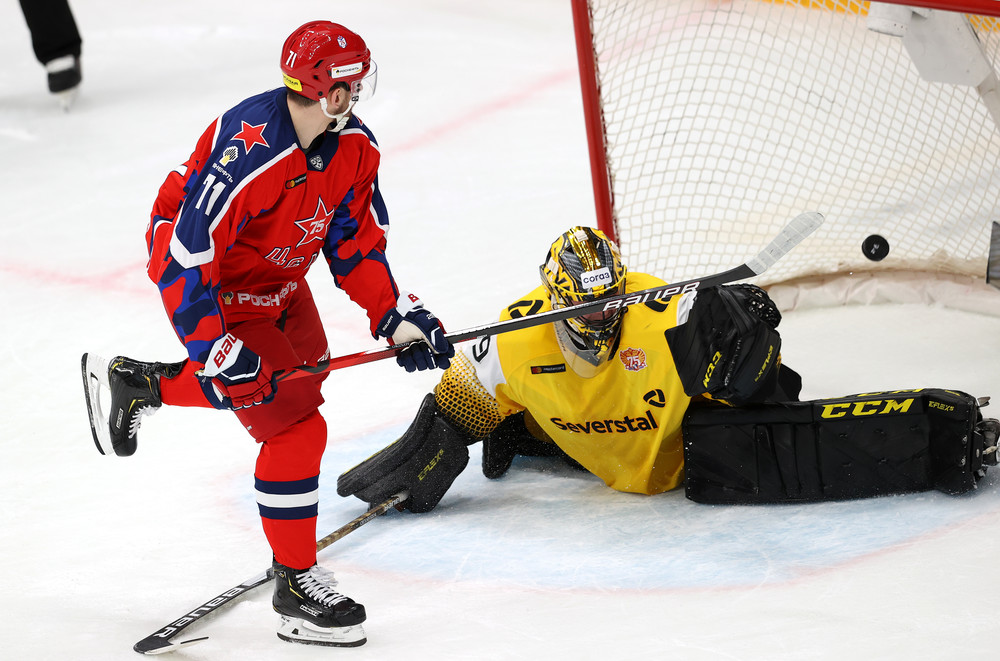 In the second session, though, CSKA seemed to be restoring the usual order of things. Mikhail Grigorenko tied it up shortly after the break, then Pavel Karnaukhov gave the Army Men the lead in the 37th minute. All back to normal? Not quite. Within two minutes the scores were tied once more, Andrei Alexeyev forcing a turnover in the CSKA zone and shooting home the loose puck himself, past the startled Fedotov.

The third period saw CSKA enjoy slightly more of the game, but neither team could find a goal. Overtime was also inconclusive, with the home team unable to take advantage of a late penalty that gave it 50 seconds on the power play at the very end of the game. Vladislav Podyapolsky withstood intense pressure on his net, but carried his team-mates into a shoot-out where Konstantin Okulov eventually gave the home team the edge.

Arseny Gritsyuk got his third goal in two games as Avangard enjoyed another comfortable home win. After overpowering Kunlun 5-0 on Saturday, this game was less lopsided. However, Simon Hrubec posted back-to-back shut-outs as the Hawks continued their recent improvement.

The home team got an early chance to seize the initiative when Yegor Voronkov took a double minor for high sticking. Vityaz managed to kill that penalty, but fell behind shortly afterwards when Damir Sharipzyanov joined the attack to fire home Vladimir Zharkov’s pass from behind the net. 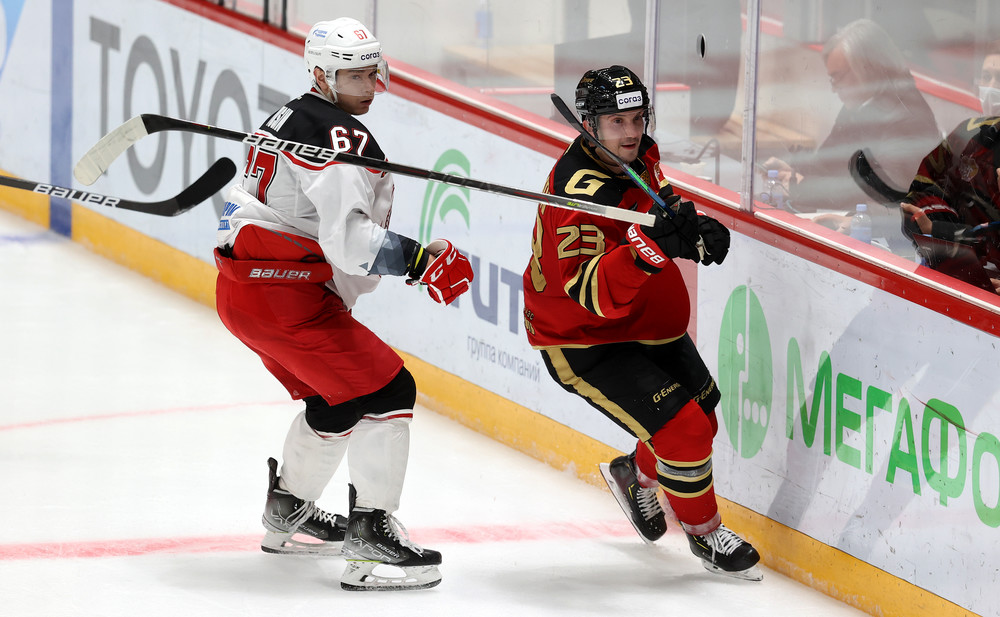 The second period was more evenly matched, but Avangard again found the only goal when Vladimir Bryukvin scored on the power play. And the result was all but assured when Gritsyuk added a third at the start of the final session.

Vityaz showed some resistance in the rest of that third period, trying to take the game to Avangard and reduce the deficit. But the home defense did well to limit the visitor’s chances and Hrubec dealt with everything that came his way to secure the verdict.