Hockey is all about scoring goals — and last week saw the biggest win of the season so far and the highest-scoring game for two seasons. The darker arts also got a mention, with Andrei Nazarov rolling back the years to stage a mega-fight against Avangard as he reached 600 games as a coach in the KHL.

Jokerit’s 8-0 win over Dinamo Riga on Sunday was the biggest victory so far this season, eclipsing the seven goal margins SKA enjoyed over Admiral and Kunlun Red Star. The star of the show was Jordan Schroeder who scored four goals and added an assist for his most productive game in the KHL. Brian O’Neill weighed in with four helpers as the Finns continue to fly high in the Western Conference.

When Sochi met Avtomobilist, the visitor’s 7-6 win was the highest scoring KHL game for two seasons. In a hugely entertaining clash, both teams held the lead. However, Sergei Shumakov’s second of the night the last seconds of overtime was enough to give the Motormen the verdict.

Artyom Anisimov came back to the KHL after 13 seasons in the NHL — and made an immediate impact with the opening goal in his first game for Lokomotiv. His redirect late in the first period put the Railwaymen on the way to victory in Nur-Sultan on Friday. Anisimov, who represented Russia at the 2014 Olympics and in six World Championships, learned his hockey in Yaroslavl but left for North America before the foundation of the KHL. He made his debut in this league during the 2012 lock-out when he returned to Loko and had 29 (12+17) points in 36 games before he was called back to Columbus.

Nikita Gusev is another player back from the NHL, and he got his first goal since returning to SKA in Thursday’s 7-0 demolition of Kunlun Red Star. The Olympic champion also had three assists in that one-sided encounter. At the other end, Lars Johansson’s shut-out was his seventh in just 15 games this season.

Finnish defenseman Mikko Lehtonen has been one of the stars of recent KHL seasons, putting up 49 points in his first season with Jokerit then returning for 17 points in 17 games before going to make his NHL debut with Toronto. Across the Atlantic, though, things didn’t work out and rather than play in the AHL, the 27-year-old agreed a return to the KHL. However, his decision to ink a long-term deal with SKA has angered some in Helsinki who feel that Lehtonen is letting down Jokerit’ fans by joining the team’s biggest rival in the KHL. Lehtonen has yet to make his debut for SKA, but this feud could run and run.

Nazarov celebrates landmark with a battle

When Sochi head coach Andrei Nazarov marked his 600th game as head coach in the KHL, he staged something of a repeat of one of his most notorious moments. Behind the bench at Vityaz, back in Dec. 2010, he was in charge of a game against Avangard that descended into a mass brawl after just six seconds. This time, Avangard was the opponent once again, and it took just three seconds for the fight to break out with three separate bouts kicking off at the opening face-off. Six minutes later, the visitor’s Yaroslav Kosov initiated another clash. After that, though, the teams played a more disciplined game and shared just four minor penalties as Avangard skated to a 5-4 win. Nail Yakupov had four points for the Hawks.

Another head coach reached a landmark when Ilya Vorobyov’s Metallurg defeated Dinamo Riga in a shoot-out. That was his 200th regular season victory as head coach, sealed after trailing 2-4 in the game. Vorobyov reached that landmark just in front of Alexei Kudashov (currently on 199) but still has a long way to go to all-time leader Dmitry Kvartalnov (430).

Zubov steps down from Riga

Sergei Zubov has left his role as head coach of Dinamo Riga after 20 games in charge. The two-time Stanley Cup winner took over the post in April and had the Latvians in contention for a top-eight finish in the West, but asked to leave due to family reasons. The club accepted that request and appointed Valerijs Kulibaba as interim head coach starting with Friday’s game against Severstal. 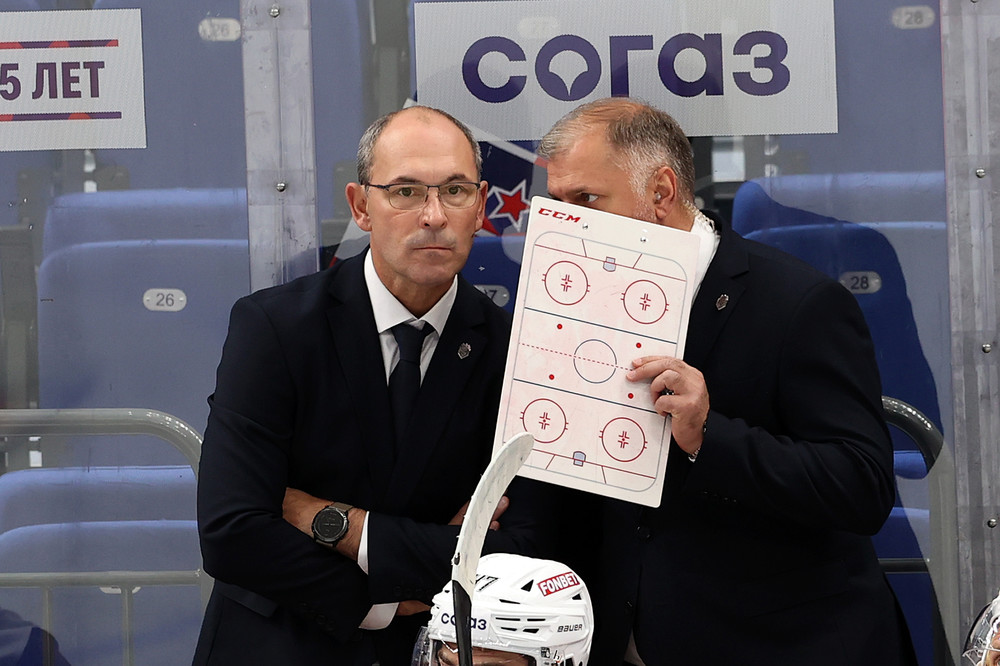