The Moscow derby saw Spartak get its first win over CSKA in eight attempts in a game that produced a fight in the third period. In Sochi, meanwhile, a brawl in the third second set the tone for an incident-packed affair as Avangard edged the Leopards 5-4. Vityaz snapped its losing streak with a 5-2 success against Sibir and Torpedo edged Avtomobilist 4-3 with two goals from Andy Miele.

Two goals from Andy Miele and a game-winner from Daniel Zaar lifted Torpedo past Avtomobilist in a hard-fought encounter in Nizhny Novgorod. Stephane Da Costa had a goal and an assist for the visitor but could not deliver the win for his team.

Miele opened the scoring here, claiming a power play goal in the fifth minute after Nikita Tryamkin was penalized. The visiting defenseman’s foul was rather needless and destroyed his team’s promising start to the game — just 12 seconds after he sat down, Miele had the puck in the net. Avtomobilist recovered its composure, though, and it wasn’t long before Sergei Shumakov thwarted the home defense in its efforts to get out of the zone and set up Da Costa for the equalizer. 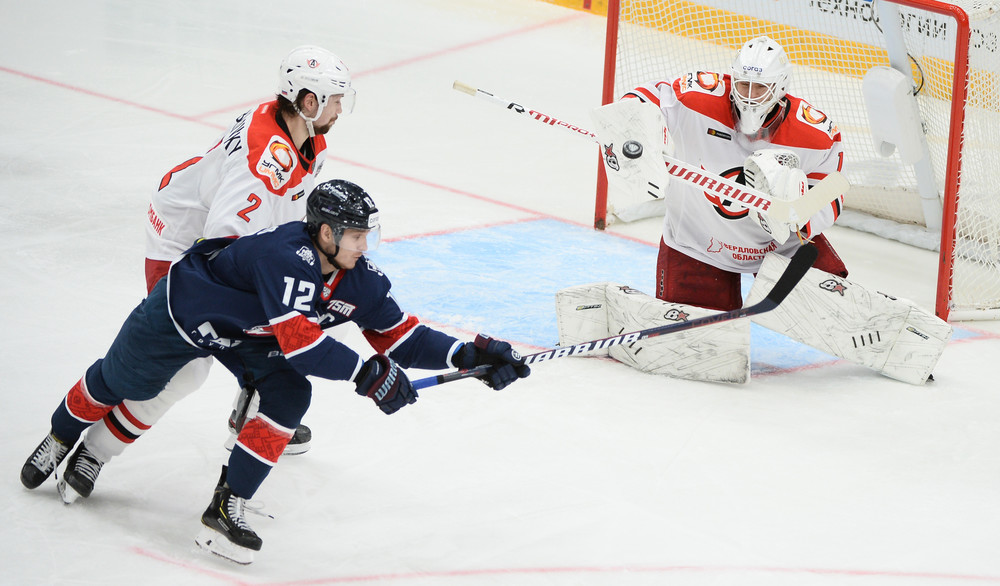 In the middle frame, the Frenchman turned provider for a Shumakov power play goal but, once again, the lead did not last long. In the final moments of the period, Miele went close before Zhafyarov set up Ivan Chekhovich to make it 2-2.

Miele got his second of the night at the start of the third period to restore Torpedo’s lead, only for Avto to find another swift response. Brooks Macek tied the game on the power play and it seemed that the teams were set to continue trading blows for the remaining 15 minutes. However, there was just one more goal to come, and Zaar claimed it when he stuffed home the rebound after Marek Hrivik went on a tour of the Avtomobilist zone before firing in a shot from the blue line.

Spartak defeated CSKA at the third attempt this season and claimed its first victory over the Army Men since November 2020. In that time, the teams met eight times — two in the latter stages of last season’s regular championship, four in the playoffs and two more this season. During that run, CSKA blanked Spartak on three occasions and limited the Red-and-Whites to a solitary goal in three other games.

This time, the home offense looked to take the initiative from the start. Spartak had the better of the first period and got its reward in the 14th minute when Maxim Tsyplakov opened the scoring. The second period was tighter, but the host still held the advantage, both on the scoreboard and on the balance of play.

Early in the third, Ivan Drozdov made it 2-0. But then, CSKA began to raise the tempo. Anton Slepyshev and Sergei Plotnikov tied it up before Nikita Nesterov’s long pass enabled Pavel Karnaukhov to set up Alexander Popov to make it 3-2. 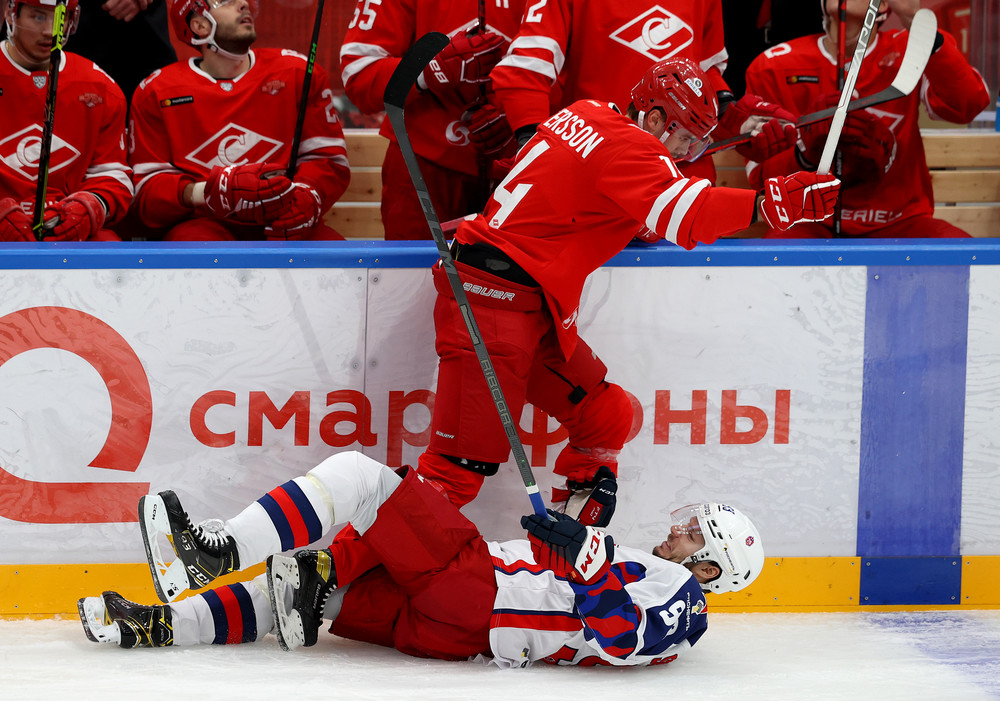 Derby day passions then got the better of Spartak’s Danila Kvartalnov, who started a fight with CSKA’s recent recruit Vladislav Kamenev and found himself ejected from the game. More pertinently, he was cited as the instigator and the home team had a two-minute PK to handle while it tried to save the game.

After killing that, Spartak got a chance of its own when Konstantin Okulov was called for interference. Goalie Alexei Krasikov went to the bench and the home team prepared to play the last 53 seconds with a 6-on-4 advantage. And the pressure paid off: with 18 seconds to play, Emil Pettersson redirected Tim Heed’s shot past Ivan Fedotov to send the game to overtime.

Once again, a Spartak power play made the difference in the extras. This time Slepyshev sat for tripping and Jake Virtanen set up Sergei Shirokov on the slot for the decisive goal.

Yakupov at the double as Avangard battles to victory

A stormy encounter beside the Black Sea produced nine goals and 64 penalty minutes as Sochi and Avangard delivered a real battle.

It all kicked off at the first face-off, with three fights breaking out simultaneously. The face-off pair, Bogdan Yakimov and Ilya Kablukov, ignored the puck in their determination to dance and, alongside them, JC Lipon and Viktor Baldayev grappled with Pavel Dedunov and Nikita Komarov respectively. All six were given major penalties, with Lipon getting an addition roughing minor.

Avangard duly took advantage of the early power play to open the scoring through Arseny Gritsyuk, but it wasn’t long before tempers flared once more. In the seventh minute the visitor’s Yaroslav Kosov instigated a fight with Dmitry Kolgotin and picked up 2+5+10 for his troubles. Kolgotin also had a fighting major but when Yegor Babenko took a high-stick penalty seconds later the home power play was halted. Next, Lipon went back to the box for tripping and Alexander Dergachyov extended Avangard’s lead before Artyom Nikolayev pulled one back for the host. 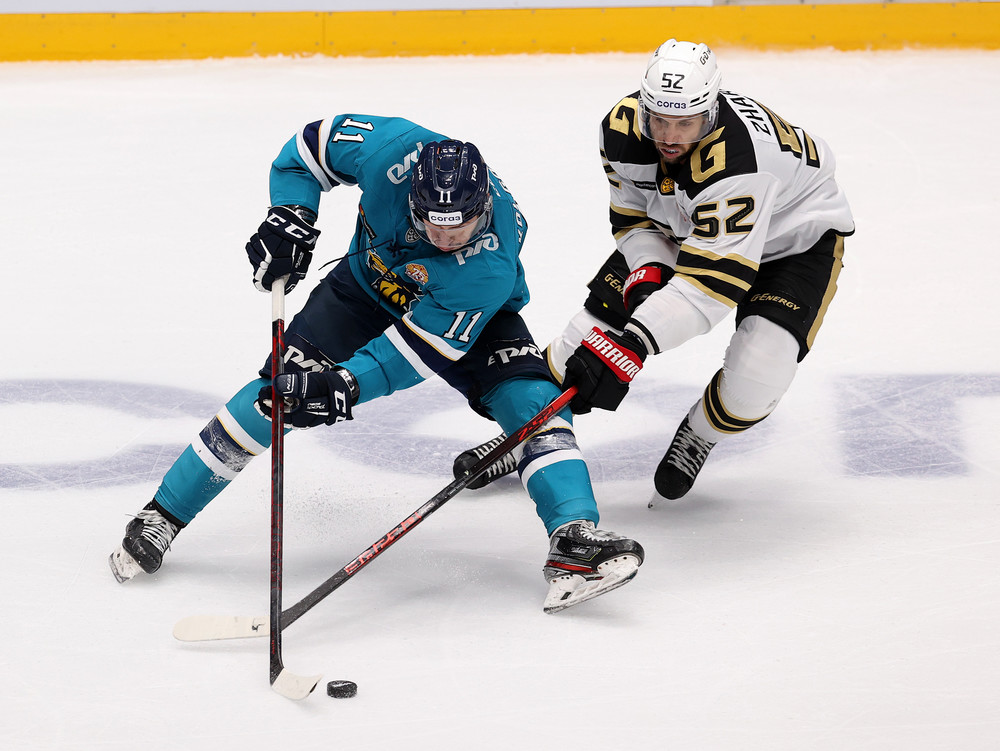 In between the clashes, Avangard played the better hockey and as the players calmed down that enabled the visitor to open a 4-1 lead. Oliwer Kaski extended the advantage in the middle frame before yet another power play goal saw Nail Yakupov strike at the start of the third. Yakupov has hit a rich vein of form that coincides with Avangard’s five-game winning streak and he added four more points in total today.

Sochi wasn’t done, though. Andrei Nazarov’s teams might be renowned for their aggressive approach — but they also pose some offensive threats. And that was demonstrated in a third-period fightback that saw 1-4 turn into 4-4 in the space of less than 10 minutes. Young Andrei Bakanov scored twice, either side of a tally from Vasily Glotov.

But the final word went to Yakupov, 62 seconds before the close. He took Nikolai Prokhorkin’s pass and fired in a shot from the blue line which deflected off a home defenseman to beat Magnus Hellberg. And that was enough to give the Hawks a hard-fought — in every sense — verdict.

Vityaz got its first win in eight games after getting the better of Sibir. There were encouraging signs for the home team in its previous game, when it took Dinamo Riga to overtime and scored three goals — the best performance by its offense this month.

Building on that, the home team scored three in the first period tonight. Daniel Audette, whose assist in a 1-2 loss at Sibir on Oct. 8 established a club record 11-game productive streak, opened the scoring after eight minutes. The prolific Canadian would go on to add two assists later in the game. Midway through the opening frame, Sibir took two penalties and the Vityaz power play scored on both of them. Vyacheslav Leshchenko and Georgy Savin hit the net and the opening frame ended with the host well on top.

Early in the second, Ildar Shiksatdarov extended that lead before Oleg Li got Sibir on the scoreboard in the 24th minute. But that did little to change the pattern of play with Audette setting up Miro Aaltonen for number five.

By that point it was clear that Sibir was heading for a fourth consecutive loss. The third period brought some consolation for the visitor when Dmitry Ovchinnikov reduced the deficit, but Vityaz was never seriously threatened as it brought a long skid to a close.