The big game of the day saw Salavat Yulaev win 3-2 at CSKA, with its Finnish forwards having a big say in the outcome. Elsewhere, SKA scored seven on struggling Kunlun Red Star, Dynamo Moscow took a 3-0 verdict at Neftekhimik and there were also road wins for Admiral and Spartak.

This Far East derby — the first since Admiral returned to the KHL this season after its one-year sabbatical — pitted two opponents steadily nudging themselves into playoff contention after sluggish starts to the campaign. And, for the visitor, it brought a second successive victory for the first time this season.

In the early stages it wasn’t easy to pick out a clear leader: both teams worked hard, but chances were at a premium. Eventually, Admiral broke the deadlock with a power play goal late in the opening frame with Vojtech Mozik finding the net.

Late in the middle frame, Mozik turned provider as Libor Sulak doubled the visitor’s lead. That was frustrating for Amur, which began the session strongly but lost its way after an untimely penalty on Danil Faizullin. Radan Lenc got a goal back for the home team early in the third and that inspired the Tigers to pile on the pressure in search of an equalizer. But Nikita Serebryakov proved too tough to beat in the Admiral goal and the visitor held on to take the win.

After a morale-boosting victory at Ak Bars on Tuesday, Dynamo continued its trip to Tatarstan with another success at Neftekhimik. A goal in each period secured the win for the Blue-and-Whites.

Dynamo got ahead in this one after 13 minutes, when Alexander Petunin put the puck into an empty net after Eric O’Dell’s shot drew goalie Alexander Sudnitsin off his crease to make the save. The second arrived early in the middle frame, a testament to a strong forecheck. Ivan Muranov chased home forward Andrei Chivilyov into the corner and forced the youngster into a mistimed clearance. Sergei Boikov intercepted the puck and stepped up from the blue line to fire home his first goal of the season. 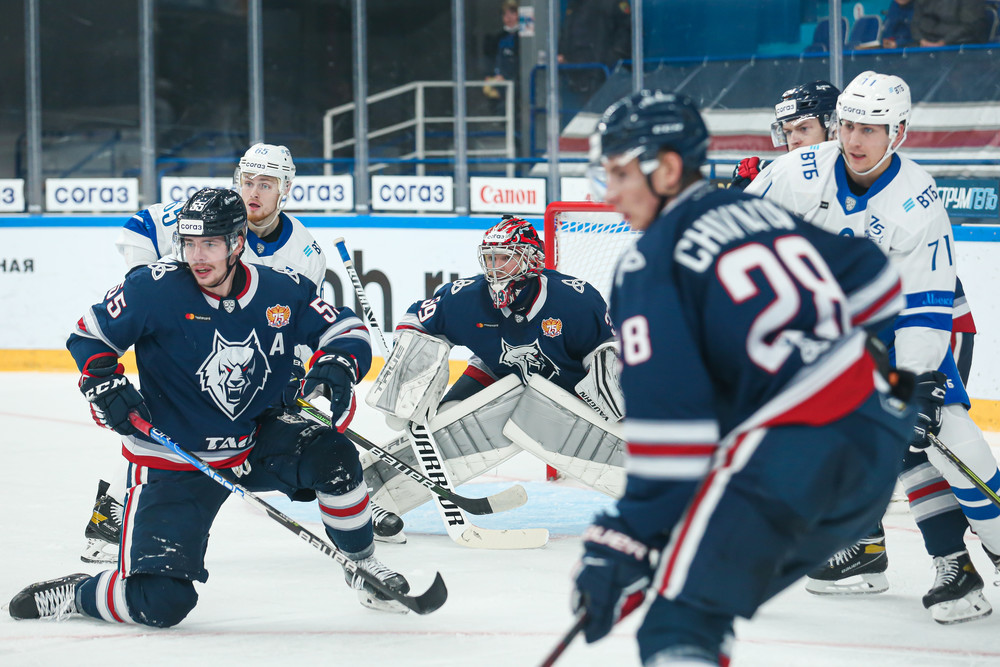 The visitor added a third goal midway through the final frame. It was officially listed as an even-strength marker, but came just two seconds after Chivilyov returned from a tripping minor. In his absence, Andrei Sergeyev quarterbacked the power play and set up Vladislav Yefremov for a shot from the left-hand circle.

At the other end, goalie Ivan Bocharov made a welcome return to form. Two days earlier, he was hooked early in the game in Kazan; today he made 25 saves to backstop the win and secure his second shut-out of the season.

Moscow hosted the biggest game of the day as a Salavat Yulaev team buoyed by victories against two in-form opponents travelled to face a CSKA side struggling for consistency.

It was the home team that got the early initiative. A power play after five minutes led to the opening goal when Vladislav Kamenev — who arrived in Moscow as part of the frantic trading triggered by Nikita Gusev’s move to SKA — played a cross ice pass for Artyom Sergeyev to fire home. And the Army Men continued to press, with Salavat Yulaev struggling to generate any kind of danger for Ivan Fedotov until the 19th minute. Then, everything changed. A power play for the visitor saw Alexander Kadeikin tie the scores and change the face of the game. 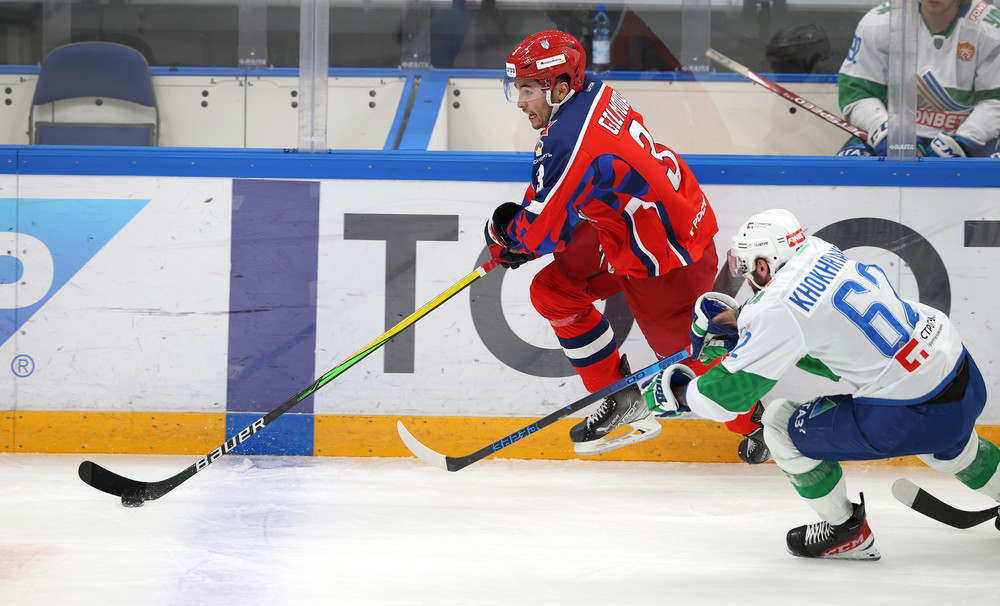 Arguably that was a reprieve for Ufa after its first-period struggles, but the second frame was much tighter — and another power play goal gave the visitor the lead. This time, it was the familiar Finnish combination that put it together and Markus Granlund fired home from between the hash marks.

Konstantin Okulov was closing to cancelling that one out within moments, but instead the home fans had to wait until early in the third to see their heroes draw level. In keeping with the game’s general theme, it came on the power play. Anton Slepyshev, fast becoming a key player on the PP, was the scorer, redirecting Okulov’s shot past Alexander Sharychenkov.

However, Ufa was not to be denied and regained the lead with the prettiest goal of the night. Hartikainen’s long pass sprang the home defense and Sakari Manninen did enough to hold off the attentions of Viktor Svedberg and get his shot away. CSKA’s hopes of salvation were hampered by a too many men penalty in the closing stages and Sergei Fedorov was unable to unleash a sixth skater until 59:24 as Salavat Yulaev did a good job of closing out the game.

SKA romped to a convincing victory over Kunlun Red Star as Ivano Zanatta endured an unhappy return to the club he coached in 2010-2011. The 7-0 defeat is the visitor’s heaviest of the season so far, while SKA produced another crushing performance against an Eastern Conference outsider, having previously scored nine on Admiral this season.

The game pivoted on two incidents in the space of a minute in the first period. With three minutes played, Red Star thought it had the lead when Alex Riche produced a great finish from Jake Chelios’ pass. However, the home bench challenged the play for offside and the review found that Riche was a fraction too quick into the SKA zone. Reprieved, the home team responded by opening the scoring on 3:42 through Daniil Pylenkov’s first of the season and from that point on it was plain sailing for the Army Men. 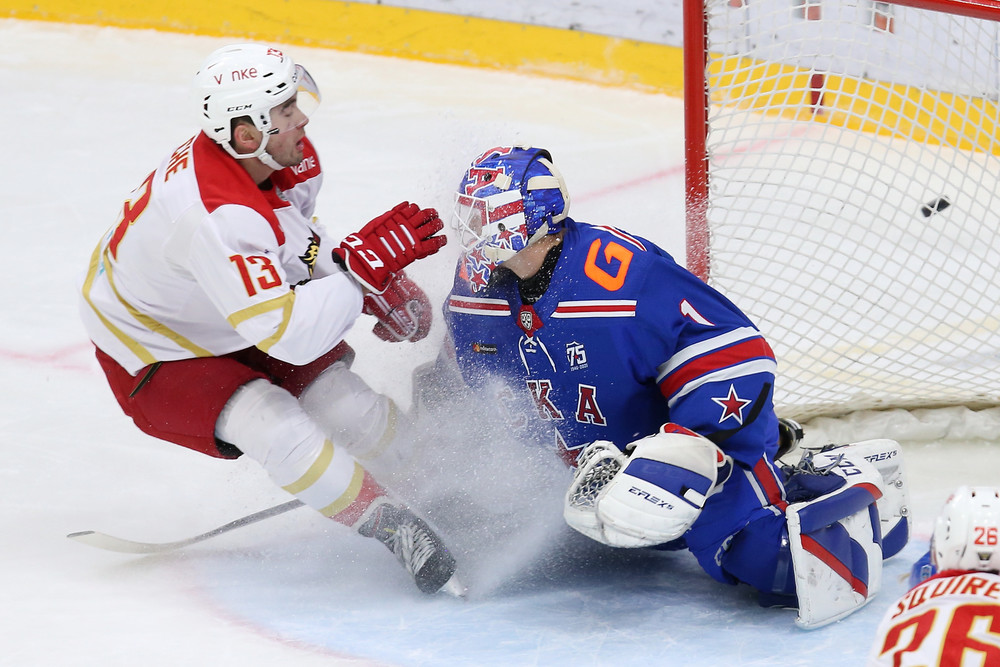 Once in front, SKA turned the screws. A power play goal from Linden Vey doubled the lead and it wasn’t long before Kunlun was on the penalty kill again as Parker Foo sat for high sticks. The visitor survived that scare, but already seemed destined for a long night. Nikita Gusev confirmed that impression with a third goal — his first since returning to the KHL — after Jason Fram and Josh Nicholls got in each other’s way at a defensive face-off and left the forward with a long look at Jeremy Smith’s net. Completing an impressive first period for the home team, Vey potted his second of the game when Smith failed to hold his shot.

The second period was much better for the visitor, which at least managed to hold the home team to no further goals. Red Star even managed to kill a 3-on-5 penalty that ran for 81 seconds. However, in the third SKA continued its goal rush. Ivan Morozov added a fifth in the first minute of the frame and Joonas Kemppainen potted another power play goal in the 46th minute. Gusev and Mat Robinson both collected their second assists of the game on this one.

There would be no mercy as SKA kept up the pressure to the end: a 5-on-3 power play at the end enabled Kemppainen to get his second of the game and open a seven-goal margin. That equals the biggest defeats Red Star has suffered in the KHL, having previously lost 0-7 at Avtomobilist in Sep. 2020 and 1-8 at home to an Ilya Kovalchuk-inspired SKA in Nov. 2017.

Vityaz got a much-needed win in its previous game, but Spartak came to Podolsk and showed that the revival is not yet fully underway as it took the points.

Spartak shaded a goalless first period here but made its advantage count in the second. Three goals inside three minutes took the game decisively away from Vityaz. Tim Heed broke the deadlock on 30:28 and he was involved again a couple of minutes later as Emil Pettersson doubled the lead with a power play goal. Jori Lehtera had helpers on both of those plays. Then came a third goal on 33:09 when Andrei Loktionov scored. This time it was Alexander Khokhlachyov’s turn to get his second assist of the night.

Although Spartak was dominant, this was not a flawless display. Vityaz managed just four shots at Alexei Krasikov in the second period, but one of them found its target and Ivan Zinchenko’s effort was awarded when a video review confirmed there was no interference on the Red-and-White goalie.

Late in the second, Spartak’s Danila Kvartalnov took a tripping penalty and that helped Niko Ojamaki put the home team right back in contention with a power play goal on 40:27. However, the home team could not find its salvation and was thus unable to build on Monday’s win over Sibir. Spartak stretches its streak to three games, sealing the deal with late goals from Jake Virtanen and Sergei Shirokov.