SKA’s 16-year-old forward Matvei Michkov got his first goals in adult hockey, scoring twice as the Army Men romped to a big win over Admiral. He wasn’t the only player recording a significant first today, with Nikolai Prokhorkin’s first Avangard goal earning an overtime win against Amur. And Sergei Plotnikov’s first points for CSKA saw his new club 3-0 up inside five minutes on the way to a win at Sochi.

Avangard went to overtime for the second game running before coming out on top thanks to Nikolai Prokhorkin’s first goal for the club.

Prokhorkin arrived here on the eve of the season as part of the blockbuster trade that took Denis Zernov to Metallurg. Unable to join the fray in the Opening Cup clash with CSKA, he made his debut in Saturday’s shoot-out win over Admiral and came up trumps with the game winner here.

The defending champion made a great start here, with Oliwer Kaski opening the scoring after 25 seconds. That ushered in a period of home domination as Amur gave the Hawks four power play chances and finished the frame outshot 17-5. Punch drunk? Maybe, but crucially the visiting defense held firm and kept it to a single goal at the intermission. 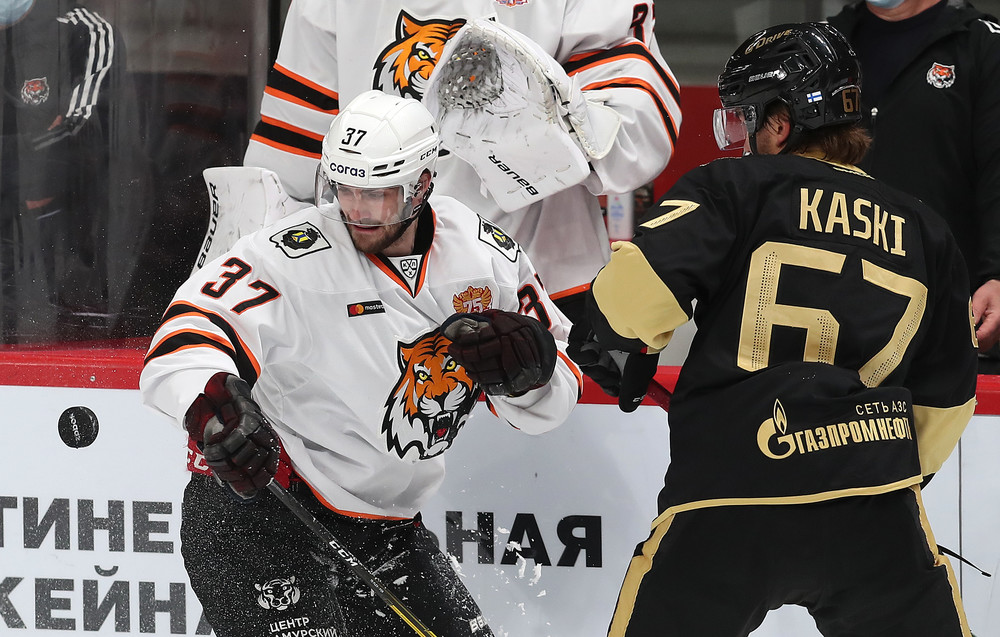 Which all set us up nicely for a sea change in the second period. This time it was Avangard running into penalty trouble.Francis Pare followed Ville Pokka into the box, and while Amur could not score on the 5-on-3 power play, Sergei Tereshchenko struck with a single-man advantage to tie the game. Within a minute, Alexei Emelin was heading to the box and, with two seconds left on the PP, Amur grabbed the lead through David Tomasek’s second goal of the season (for reference, it was only a third for his team).

The steady flow of home penalties continued, making it difficult for Bob Hartley’s team to build the sustained pressure it wanted in its quest for a tying goal. And nerves were beginning to jangle when Kaski finally levelled the scores midway through a third period that saw his team-mates reassert their earlier dominance. Amur, though, stuck around to force overtime — a first point of the season for the Tigers — before falling to Prokhorkin’s debut goal.

Teen scoring sensation Matvei Michkov is at it again. Last season, he tormented defenses in the Junior Hockey League and the World U18s. Today the 16-year-old proved that he can do it in the adult game as well. Two strikes in the third period underlined an emphatic SKA win and reminded everyone that we could be looking at a very special talent here.

After two hard-fought wins on the road, SKA clearly found home ice appealing. And it welcomed fans to the Petersburg Ice Palace for the first time this season with an emphatic victory over Admiral. The Sailors, meanwhile, are still seeking their first win since returning from a one-year pandemic-related sabbatical.

Valery Bragin handed a debut to Mikhail Vorobyov, a summer signing from Salavat Yulaev, and was rewarded with a goal almost immediately. He took up a position on the doorstep to beat Ivan Nalimov at the second attempt. It wasn’t long before Anton Burdasov doubled that lead with a characteristic power play goal, then Danila Moiseyev got his debut goal for SKA following a summer switch from Vityaz. This one won’t be winning any beauty contests, but they all count and the Army Men had a commanding 3-0 lead at the first intermission.

The picture did not change much in the second period. Kirill Marchenko rifled home a fourth goal from between the hash marks before Andrei Kuzmenko scored the pick of the bunch when he burst in from center ice, bisected two defensemen and lifted a deadly shot over understudy goal Nikita Serebryakov’s pad to beat him glove side.

Admiral finally got on the scoreboard late in the second thanks to Dmitry Sayustov, but it already felt like little more than consolation. That was confirmed seconds into the final frame when Evgeny Timkin made it 6-1.

The best news for the visitor was probably the sight of Vyacheslav Ushenin scoring. He and his twin brother Vladislav are likely to be the crux of the Sailors’ offense this season, and this was the first goal either of them had scored this season. Indeed, for Vyacheslav, it was his first Admiral goal since Jan. 2015, with spells at Amur and Sibir in the interim.

However, the next goal was the one that was destined to grab the headlines. Michkov, still only 16, added another layer of gloss to his already impressive reputation by potting his first KHL goal in only his third appearance at this level. Marchenko’s feed was perfectly placed, separating the goalie from his defense, and Michkov showed great composure to shoot through Kuzmenko’s legs into the wide-open side of the net. There was more to come in the final minutes, with Michkov getting the puck in the left-hand channel, moving into the circle and wiring a wrister that gave Serebryakov no chance. In terms of the outcome, it meant little; in terms of this prodigy’s rapid development, it means everything.

Sochi began the season with a rush of goals, while CSKA’s first steps under the coaching of Sergei Fedorov were not entirely convincing. However, Monday’s match-up beside the Black Sea went the way of reputation more than immediate form with the Army Men marching to a convincing victory.

The game was effectively done in the first five minutes. Sergei Plotnikov began in a hurry, and proved way too hot for Sochi to handle. He opened the scoring after 98 seconds, assisted on Mikhail Grigorenko’s fourth-minute power play goal, then got another helper as Konstantin Okulov made it 3-0 on 4:31.

More encouraging for Fedorov, that fast start showed his summer acquisitions starting to combine effectively. Grigorenko made it back-to-back goals, Plotnikov got his first points of the season and Nikita Nesterov added to the assists he had against Dinamo Riga with another helper here. When proven talent starts to get hot, it’s time for the rest of the league to pay attention.

Admittedly, the pace dropped after that blistering opening. It might stretch a point to suggest that Igor Rudenkov’s goal for Sochi early in the second hinted at a comeback, but the pacey scoring we saw at the start was a thing of the past. However, CSKA was not going to relinquish its grip and Klas Dahlbeck made it 4-1 as Okulov got his third point of the night.

By now, the game was done. The third period was largely academic and both teams knew it. CSKA managed the closing stages effectively to secure the win; Sochi fell to its first loss of the campaign.

Spartak and Vityaz spent much of last season neck and neck in the race for a Western Conference playoff place. So it should not have been a huge surprise that the two were deadlocked at 2-2 after 60 minutes play here. That battle for a top eight finish was eventually won by Spartak, and today’s game went the same way thanks to an overtime winner from Emil Pettersson.

The Swede struck on the power play after Alexander Yaremchuk sat for tripping. Spartak needed just 12 seconds to convert that chance as Pettersson won his battle on the slot and fired past Ilya Ezhov.

The Red-and-Whites have enjoyed life in their new home at the Megasport Arena and, midway through the first period here, looked well set for a third straight win. Andrei Loktionov made the early breakthrough, converting a Dmitry Kugryshev feed from behind the net. Then, on exactly 10 minutes, Alexander Khokhlachyov doubled the lead on the power play, circling round the Vityaz zone before shooting home from the left circle.

Vityaz hit back late in the frame and Niko Ojamaki, whose hat-trick in Sochi was not enough to escape an overtime loss, found the net again with a power play effort after good work from Miro Aaltonen and Miks Indrasis.

In the second period, visiting goalie Ezhov was much the busier as Spartak outshot Vityaz 14-5. However, he came up with all the answers to keep the game intriguingly poised as the third session got underway. And sticking around brought its reward at the start of the third when another power play goal saw Yaremchuk tie the scores.

Yaremchuk had a decent chance to win it on the power play midway through the frame, while Jori Lehtera almost stole it for Spartak in the last minute. Instead, though, it was Pettersson who gave the home team the verdict.