The Channel 1 Cup got underway in Moscow, and Russia began with a shoot-out win over Sweden on Thursday evening. Earlier in the day, Finland won 4-3 against the Czechs, with all four goals coming from KHL players.

Russia, playing for the first time under new head coach Valery Bragin, made a winning start to the Channel 1 Cup in Moscow. However, the opening examination against a Swedish team with a strong KHL accent was a hard-fought affair. The teams shared six goals before Andrei Kuzmenko gave Russia the verdict in the shoot-out.

The Russian line-up offered few surprises. Bragin led with the same top line that trained together during the week, so captain Vadim Shipachyov centered for Vladimir Tkachyov and Andrei Chibisov. Alexander Samonov got the nod in goal. Sweden named 17 KHLers on its team, and it was no surprise that the top line was an all-KHL affair featuring Jacob Berglund (Severstal), Dennis Rasmussen (Metallurg) and Magnus Paajarvi Svensson (Dynamo Moscow).

Russia twice hit the piping in the first period but was unable to break the deadlock despite looking dangerous for much of the session. After the intermission, though, the Tre Kronor were more active and Samonov had a busier time of it. That paid off in the 25th minute when Klas Dahlbeck, who usually plays on this ice in the colors of CSKA, fired in a shot that took two deflections on its way into the net. The second ricochet came from the back of Traktor forward Pontus Aberg, who was credited with the opening goal. In reply, Russia produced a patient passing move that ended with Kuzmenko shooting past his SKA team-mate Magnus Hellberg from close range.

The visitor regained the lead at the start of the third period when Russia lost possession on the blue line and Emil Petersson surprised Samonov with a long-range effort. In reply, Bragin’s team created two quick goals: Shipachyov was among the assists as Nikita Soshnikov tied the scores, then the Dynamo talisman made it 3-2 with a power play goal in the 51st minute. However, it wasn’t enough to win the game and Sweden tied it up through Emil Larsson to take the action into overtime.

Russia had the best chance of the extras, with Soshnikov going close in a two-on-one break. But it needed a shoot-out to settle the outcome and Kuzmenko provided the decisive goal in the eighth round. 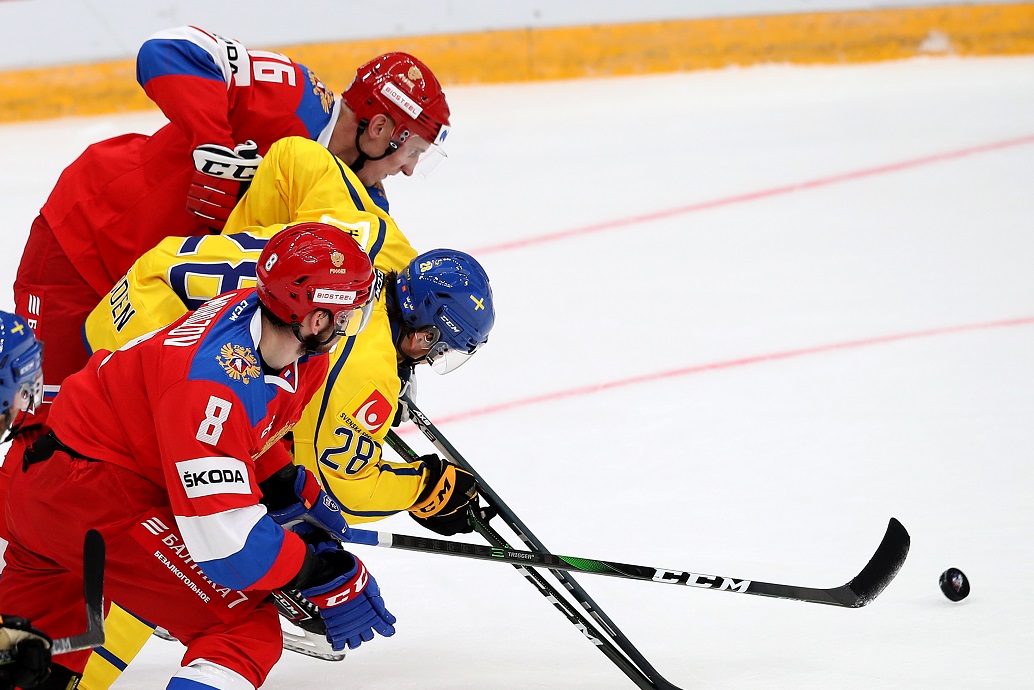 ‘The first game is always exciting, the pace is a bit higher than in the KHL and it takes a moment to adjust. It’s always good playing against a team with lots of KHL players, it’s a plus when you know the players and know what to expect from them.

‘Both of the goals I was involved in were good, really great plays. It was typical Russian hockey, lots of passing.’

‘We created chances right away and Vovka Tkachyov played great, but we couldn’t score so they decided to switch the lines. That’s normal, the coaching staff wanted us to do it, so we did it.’

The best KHL players from the four countries are coming together and the level of hockey is much higher. Everything is quicker, you need to think quicker. It’s high-quality hockey. We have some injured players but this tournament is a good test for our guys. Whoever makes a good impression will be a candidate for the World Championships.’

HC Sochi forward Jere Karjalainen had a goal and an assist to lead Finland to a narrow victory over the Czechs in the opening game of the Channel 1 Cup.

The game involved 22 KHLers, 12 from Finland and 10 from the Czech Republic. That’s a big turnaround from the Karjala Cup, where Finland and Sweden relied almost entirely on home-based rosters. And all four Finnish scorers currently ply their trade in our league. Dinamo Riga defenseman Toni Sund opened the scoring in the fourth minute and Mikael Ruohomaa of Sibir restored the lead late in the first period. Karjalainen assisted on that before making it 3-1 early in the second, and Neftekhimik’s Otso Rantakari added a fourth. The Czechs had a goal from Dmitrij Jaskin in response to that but went to the second intermission trailing 3-4 and could not salvage the game in the third frame.