Slovakia has always had a strong presence in the KHL. In the inaugural season, there were 17 Slovaks in the league — only Canada and the Czech Republic had more players without entering a team in the competition. Later, with the advent of Lev Poprad and Slovan Bratislava, the numbers increased. However, the brightest stars from Slovakia appeared early in the KHL’s history, although Michal Cajkovsky and Martin Bakos produced strong seasons last time to suggest that another storm might soon be unleashed from beyond the Tatras.

Julius Hudacek arrived in the KHL with a reputation as a showman. A quick online search turns up ample clips of his popular dance routines as he celebrated victories during his time at Sweden’s Orebro. But we hadn’t seen it in person in the KHL: his solitary game in the league prior to his arrival at Severstal ended in defeat for Sibir at Metallurg Novokuznetsk, nothing to make a song and dance about. That all changed in Cherepovets, where Hudacek backstopped a 3-2 success over Loko on his home debut in September 2017 and went on to pick up 23 wins as the Steelmen made the playoffs. Noted for his agility, and with a sharp glove hand, he also got to bust out his moves at the All-Star Game that year as he set a record for Slovak goalies in the KHL.

Hudacek overtook Rastislav Stana, a Kosice native with a handful of NHL appearances for the Capitals. Stana also arrived in the KHL with Severstal, but his best campaign was in his first season at CSKA, where he had 20 wins for the Army Men. Stana remained at CSKA until 2013-2014 before moving to Kosice to end that season by helping to win the Slovak championship. His final action came with Sparta Prague the following year. 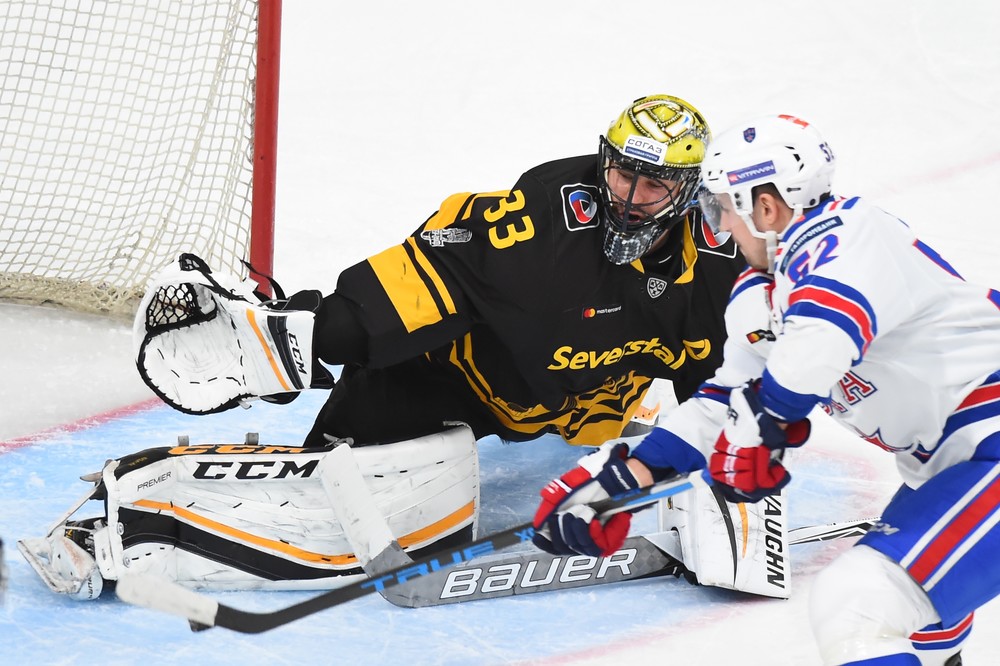 Most shut-outs in one season

Hudacek’s year at Severstal also saw him match the Slovak record for shut-outs in a single campaign before he moved on to Spartak. But his five blanks had been achieved twice previously, with Jan Laco’s getting there first in 2011-2012. He began that campaign as back-up to Tomas Duba as Lev Poprad began its only season in the league. But Duba managed just three wins in the first nine games and Laco was given his chance. A shut-out win over Metallurg Novokuznetsk made an eloquent case for the former Kosice man to see more action and he repaid that faith with some impressive displays. Laco ended the season on a high, joining Slovakia for the World Championship and backstopping a run to a silver medal. He also played at the Sochi Olympics and continued his KHL career with Donbass Donetsk and Barys. He retired in 2019 after a brief spell back at Kosice.

A third Slovak goalie also had five shut-outs in a season. Jaroslav Janus was a promising prospect when Slovan Bratislava joined the KHL in 2012. He returned from five seasons in North America to rejoin his first club, and took the lion’s share of the game time as Slovakia’s most famous team made the playoffs in its debut season. Janus remained at Slovan for two more seasons before moving to the Czech Republic. Now aged 30, he spent last season with Litvinov in the Czech championship. 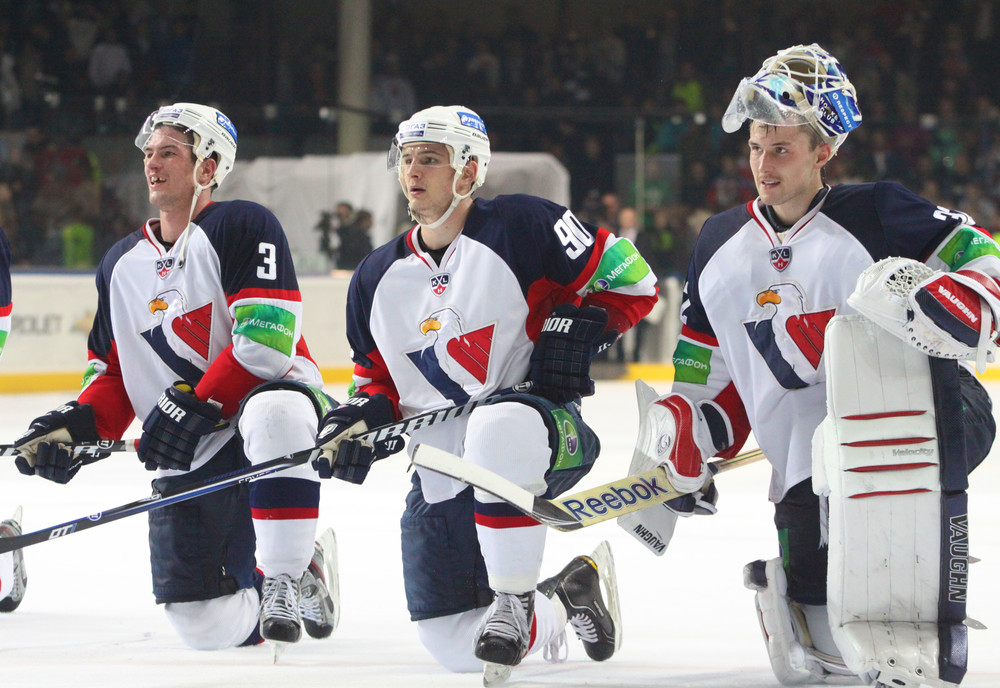 Peter Podhradsky was part of the generation of Slovak players that emerged when the country separated from Czechoslovakia in the 1990s. As a 20-year-old, he played on the Slovakia team that took World Championship silver and by the time the KHL started his career had taken in three seasons in the AHL, action in the Czech Republic and Germany, and a spell in Russia with Metallurg Novokuznetsk. That wanderlust continued; Podhradsky would represent six different teams in the KHL, becoming a cult hero at Donbass Donetsk. But his most productive season was his first, putting up 38 points for Torpedo in the league’s debut year.

Like Podhradsky, Martin Strbak was no stranger to Russia when he came for his first KHL season in 2009. The vastly experienced Presov native had already won a Russian Superleague with Lokomotiv back in 2002 and helped Slovakia to its first World Championship gold in the same season. His arrival at Oleg Znarok’s MVD helped to transfer an unfancied roster into Gagarin Cup finalists and proved to be the most productive of Strbak’s long career. He had two more seasons in the KHL, with Dynamo Moscow and Lev Poprad, before playing out his final years in Kosice. Last season he was a coach on Slovakia’s U20 team. 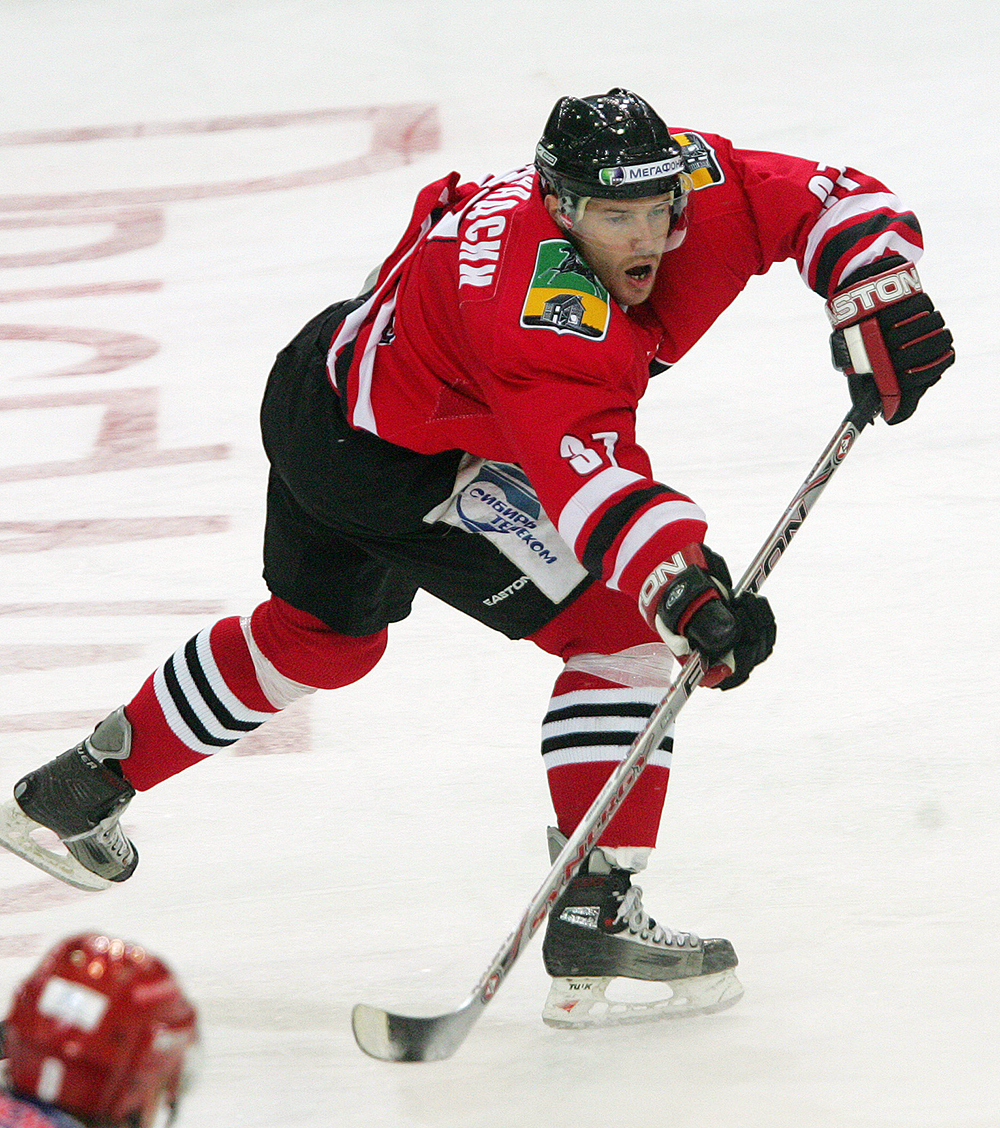 Ivan Baranka was in the KHL from the start, leaving the New York Rangers organization to join Spartak. His first season was an adjustment, but in 2009-2010 he blossomed, producing 32 points and becoming the first Slovak defenseman in the league to score 10 goals in a season. Baranka spent four seasons on a Spartak team with a strong Slovak accent before spending time at Salavat Yulaev, Avangard and Slovan. Now 35, he played last season with Kometa Brno in the Czech Republic.

Podhradsky, meanwhile, continued to be an effective player. His best goalscoring return came in Donetsk in 2012-2013 as the KHL expanded into Ukraine. That puts him ahead of Jaroslav Obsut, Christian Kudroc and Michal Cajkovsky, all of whom managed nine goals in a single season. 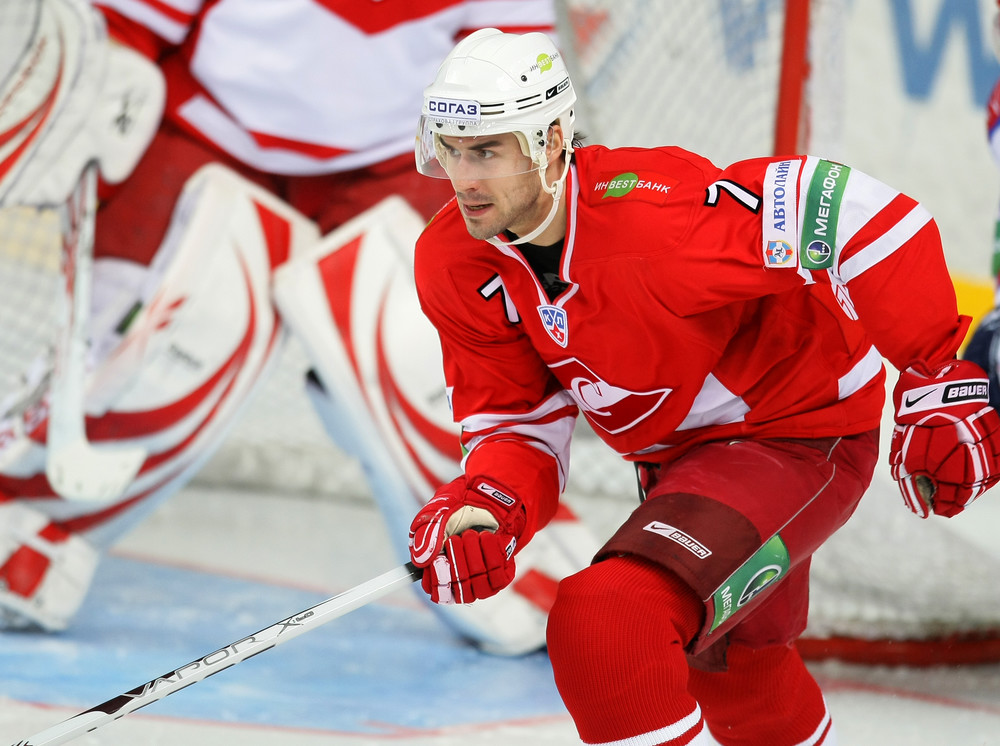 Best +/- in a single season

After several strong performances from Slovak defensemen in the early years of the KHL, it went a bit quiet for a while. The arrival of Slovak teams in the league, first Lev Poprad then Slovan Bratislava, saw more players involved but the struggles of those clubs made it hard for individuals to shine. Michal Cajkovsky would change that. He joined Avtomobilist during the 2016-2017 campaign and made an immediate impact with 15 points from 20 games. The following season, still with Yekaterinburg, he got an Olympic call-up. Then came a half-season of AHL action before Cajkovsky joined Dynamo. Last season was his best so far in this league — only three of his compatriots have better than his 31 points in a single season, while his +20 rating puts him out in front on that measure.

Once again, Podhradsky features on the list. His best rating, +19, came as Donbass made the playoffs for the only time in its two years in the KHL. Among the other notable performers on this list, Tomas Starosta stands out. In 2010-2011 he had a +14 tally despite playing just 28 games for Salavat Yulaev’s Gagarin Cup-winning team. 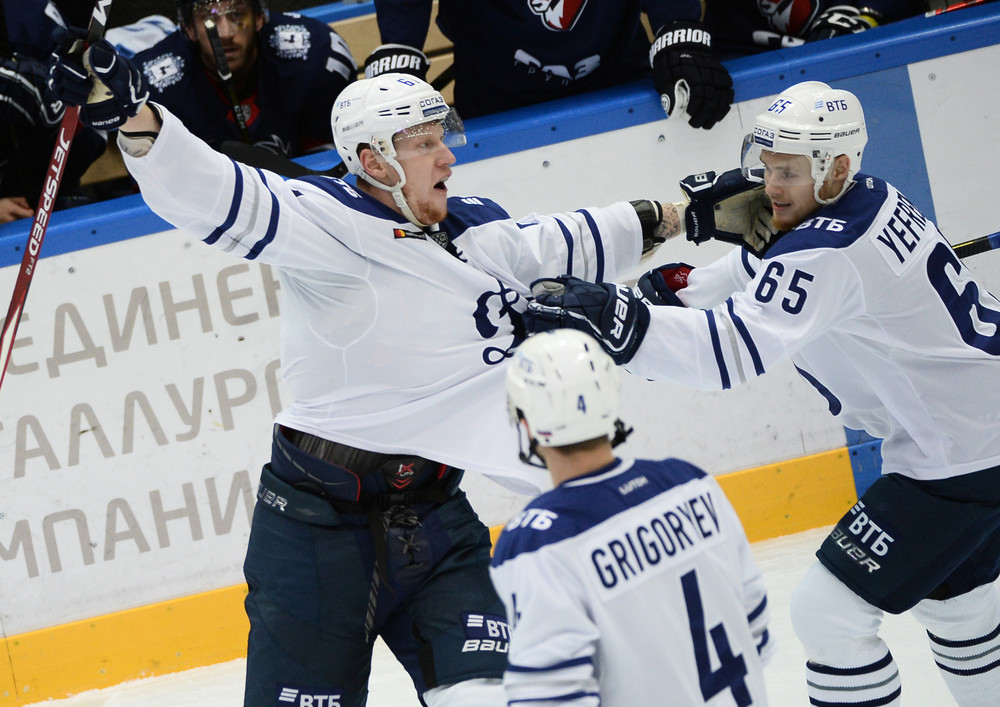 Of all the Slovak forwards who played in the KHL, Pavol Demitra’s name stands out. A true giant of hockey in his homeland, he joined Lokomotiv in 2010 after a long and successful NHL career. He arrived in Yaroslavl on the back of a successful Olympic campaign in Vancouver, where he led the tournament in scoring and was selected to the All-Star team. In Russia, he was the engine of Lokomotiv’s offense, leading the team in scoring with 60 points and placing fifth overall in that season’s KHL. Sadly, Demitra never had a chance to beat his record. On the opening day of the following season he was on board the Lokomotiv plane that crashed shortly after take-off from Yaroslavl’s airport

Two players tied for second place, with both Marcel Hossa and Branko Radivojevic putting up 55 points in 2009-2010. Hossa was one of the players who swapped the NHL for the KHL, joining Dinamo Riga for the league’s inaugural season. He was an immediate hit in Latvia and this productive second season earned him a move to Ak Bars. He later joined Spartak and played on Lev Prague’s first KHL team, before finishing with two more seasons in Riga. He finished his career in 2018 with his first club, Dukla Trencin.

Radivojevic had a similar journey, swapping the NHL for the KHL in 2008 and joining Spartak. In 2009-2010 he and Hossa tied for seventh place in KHL scoring. Like his compatriot, Radivojevic was strongly associated with one team — Spartak — despite spells elsewhere at Atlant, Neftekhimik and Slovan. Twice named captain of the Red-and-Whites, he remains active in the game at the age of 39. Last season he took on his first coaching role at Dukla, where he also played two games during the regular season. 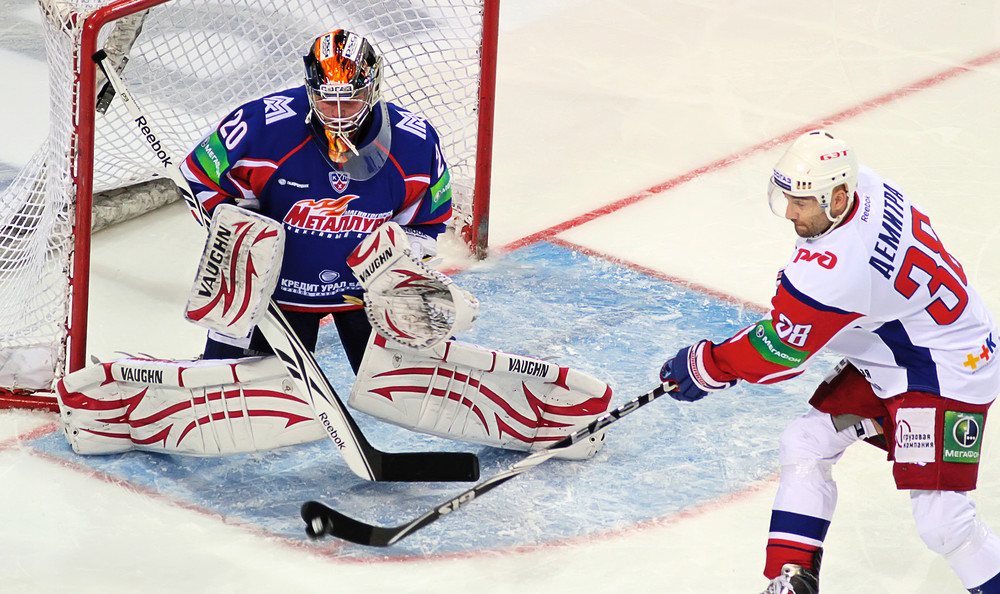 Hossa’s 35-goal haul in 2009-10 makes him the most prolific Slovak sniper in a single KHL season — and by some margin. Indeed, the Dinamo Riga man led the league in goals that season, ahead of such names as Sergei Mozyakin, Alexander Radulov and Maxim Sushinsky. It says much for his consistency that four years later Hossa was again the leading Slovak goalscorer in the competition, potting 22 on that occasion.

That total was one fewer than Ladislav Nagy managed in the following campaign. After beginning his career in Kosice, he went on to become a fans’ favorite on both sides of the Atlantic. It was a moving occasion when he played his final game in his hometown arena during the 2019 IIHF World Championship at the end of a season in which the veteran had led the Slovak league in scoring. His KHL career took in a stint at Severstal early as the league was formed, then some time with Lev Poprad and Dinamo Minsk. But it was his 2014-2015 season wearing the ‘A’ for Slovan that saw Nagy hit his best form. A 41-point haul included 23 goals, enough for second place on this list. 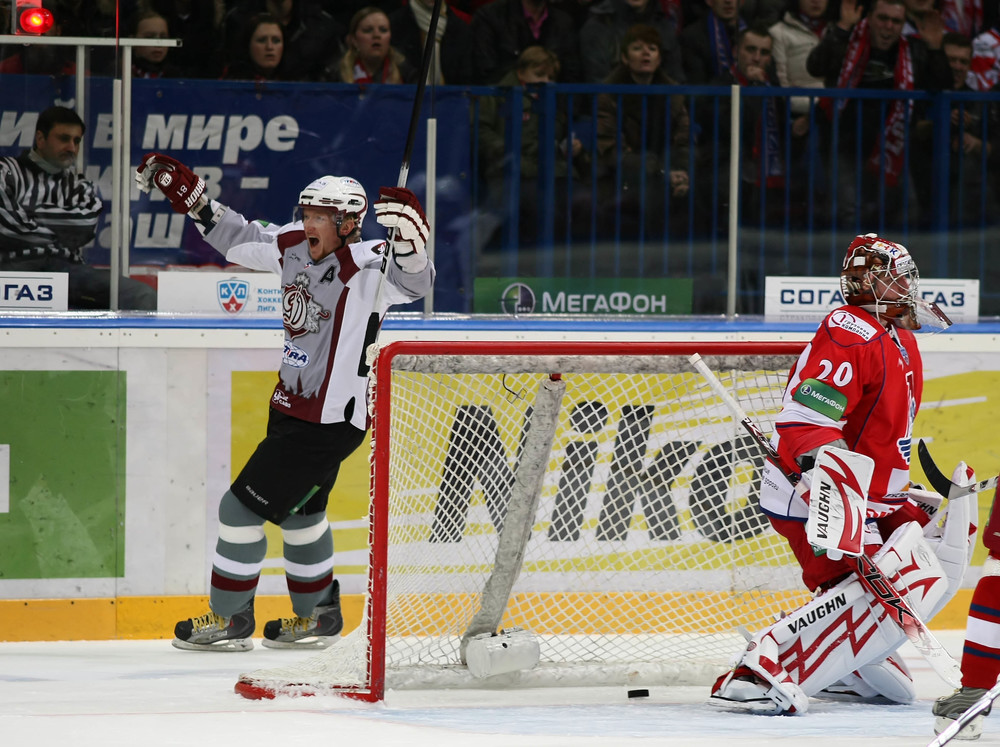 Demitra’s renown as a playmaking center is reflected in his position at the top of this list. During his productive season in Yaroslavl, he regularly supplied the bullets for linemates Josef Vasicek and Alexander Korolyuk to fire.

Veteran Jozef Stumpel made his top-level debut in the Czechoslovak league back in 1990 and represented Czechoslovakia at U18 and U20 level. He played most of the 1990s in the NHL and would finish with 958 regular season appearances before he joined Barys as the KHL opened its doors. A strong start saw the right-handed center fifth in the team’s scoring in 2008-2009, and it got better the following year as he topped the charts with 52 (13+39) points. Stumpel went on to play for Dinamo Minsk and Spartak Moscow in the KHL before returning home to Nitra, his first club. Impressively, at the age of 47, he is still playing: last season he had 23 points in 20 games in the Slovak third division — making 31 seasons in the game.

Alarmingly, after Demitra and Stumpel, the numbers drop off sharply. No Slovak forward had more than 20 assists in a KHL season again until 2019-2020 when Martin Bakos achieved that mark with Admiral. Bakos finished with 42 (19+23) points, the best tally for a Slovak player since Ladislav Nagy in 2014-2015. 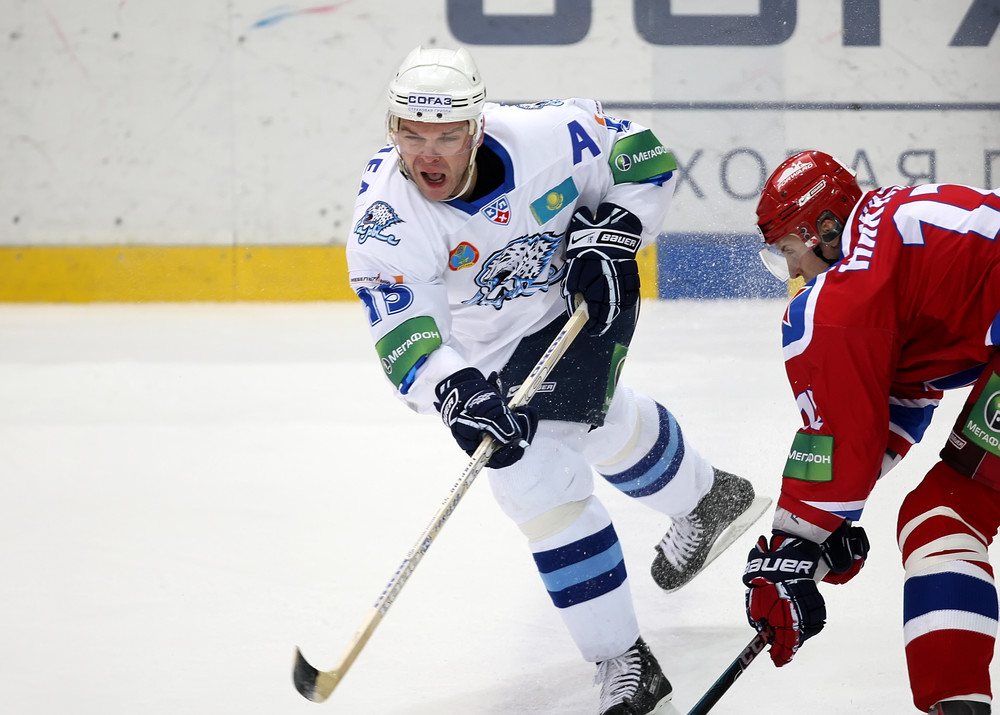