Hitting the heights – the KHL World Games in Davos

Monday’s match-up in Switzerland, 1,600m above sea level, was a high spot in every sense of the word. On the ice, a pulsating Green Derby battle between Salavat Yulaev and Ak Bars delivered all the high-octane thrills associated with the best of the KHL. Off it, both the clubs and the league made new friends and were able to showcase the high levels of organization and professionalism to be found in KHL arenas from Belarus to Beijing.

The game turned out to be a star performance from Salavat Yulaev’s Swedish international Linus Omark. The forward scored one and had two assists to help his team to a 4-3 win in overtime. Displaying his hallmark vision on the ice, Omark showed everyone why he has overtaken Alexander Radulov to become Ufa’s leading scorer in the KHL. His plays for Eduard Gimatov’s tying goal at 3-3 and then again for Philip Larsen’s winner 10 seconds into overtime were both well worth seeing.

For Ak Bars, defenseman Albert Yarullin emerged as the unexpected star of the show. He had a hand in all three of his team’s markers, assisting on first-period markers from Matt Frattin and Viktor Tikhonov before blasting home the 3-2 goal at the start of the second. Vladislav Kara also deserves a mention: the youngster didn’t get among the points, but his audacious attempt at shooting through his own legs late in the middle frame was one of the stand-out moments in the game.

The entertainment wasn’t just on the ice. As the teams battled for the Chak-Chak Trophy, fans got a chance to sample the popular snack in the arena – and among the servers in traditional Tatar costume was Ralina Arabova, Miss Tatarstan 2019.

There was also a distinctive sound to the evening, with the Ak Bars Band banging the drum for their team while Salavat Yulaev invited a master of the qurai, a traditional Bashkir flute, to serenade spectators in a yurt constructed outside the arena. 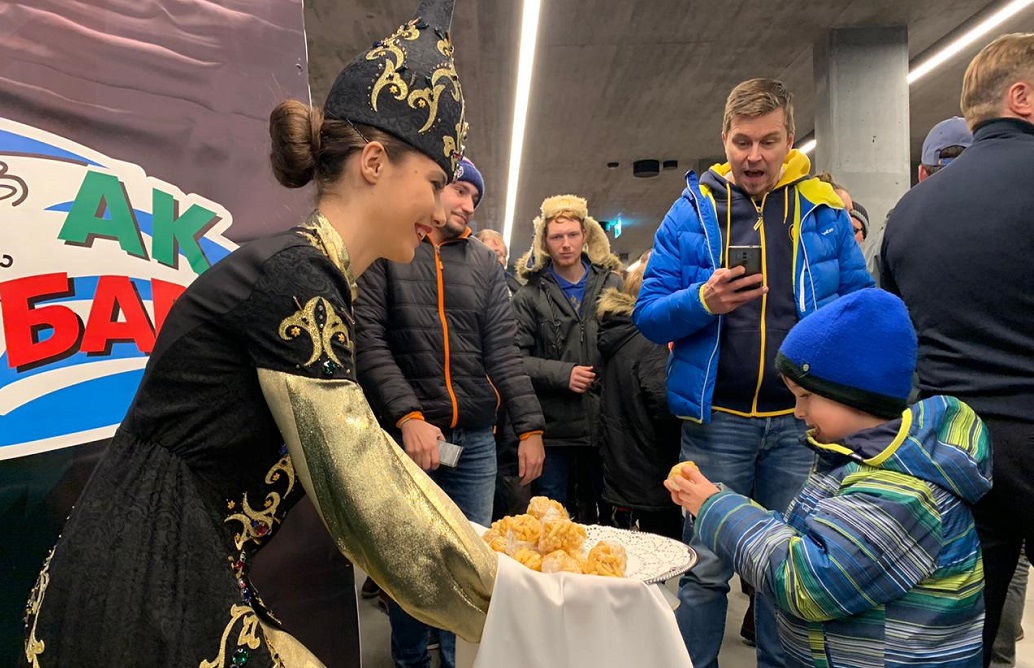 One of the highlights of the day was an exhibition game between supporters of Ak Bars and HC Davos. Played on the practice rink at the Eisstadion, it brought together local hockey lovers with their Russian counterparts. Sergei Krylov, captain of the Kazan team, explained how it came about.

“When we heard that there were plans to stage a KHL game in Davos, we went to the club with a proposal: why not do a bit of ‘hockey diplomacy’ and set up a game for the fans before the main event? Then we found some contacts for the guys in Davos, who played with us at a European tournament in the past. Even though it was right before Christmas, they were happy to find the time to come and play with us.

“We all speak a common language, the language of hockey. And the result of the game was less important than getting together and playing.” 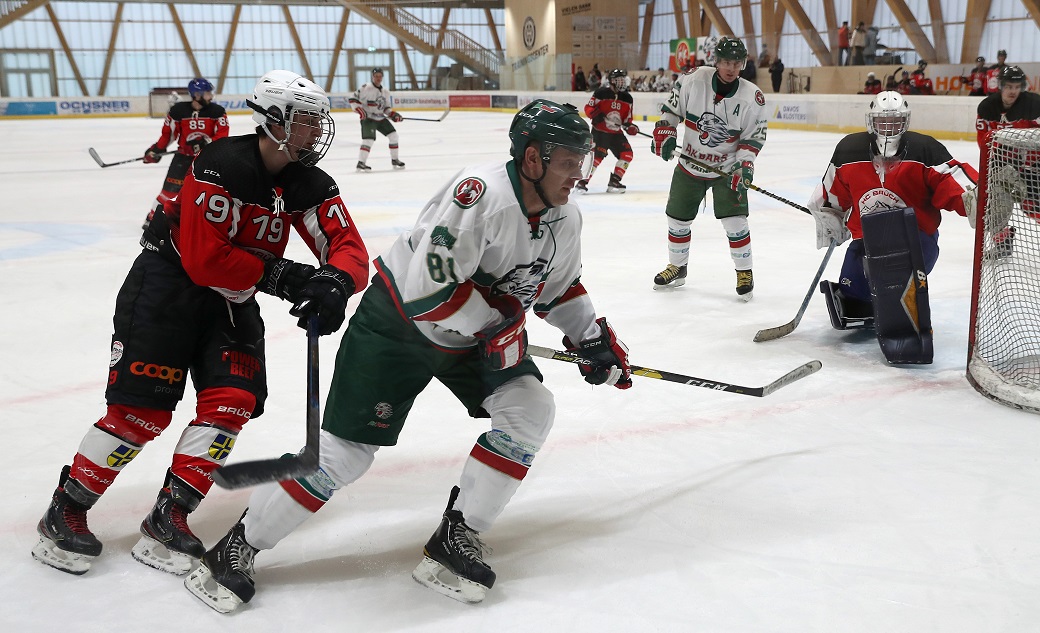 Krylov & Co enjoyed a warm reception in Davos, and that went for the whole KHL party in Switzerland. Patrick Bloch, CEO of the Swiss Ice Hockey Federation, talked enthusiastically about the league’s hi-tech approach to staging games – from more cameras to help referees, to smart puck stats keeping everyone informed of every detail of the game.

And there were kind words from other local dignitaries. The Mayor of Davos, Tarzisius Caviezel, said: “We’re very proud to welcome the KHL to Davos, to our newly-renovated arena. This is one of the first big games here this season.”

Spengler Cup director Fredi Pargatzi added: “We’re really pleased to see the KHL come here to our snowy Davos. It was good to hear that we have good quality ice not only in our whiskey, but also in the arena! I hope everyone enjoyed the game, and that we will see you with us again very soon.”

And IIHF President Rene Fasel, who made the trip over from Zurich for the game, continued to talk up the prospects of KHL expansion into Europe.

“As the Russians would say, ‘pochemu niet?’ [why not?],” he said. “There would be problems to solve: budgets, travel. I think only Geneva or Zurich could manage that. Geneva might be the most likely option, there have been talks about it in the past. We understand that the KHL is keen to expand, both in the East and the West, and the league is focusing on bigger cities than Davos.”

As for Monday’s game, Fasel liked what he saw – apart from the weather. “It’s a great privilege for Davos and the Swiss fans to have you here,” he added. “It just a pity that the weather was bad and made it difficult to get to the game. That cost us a couple of thousand in the arena.” 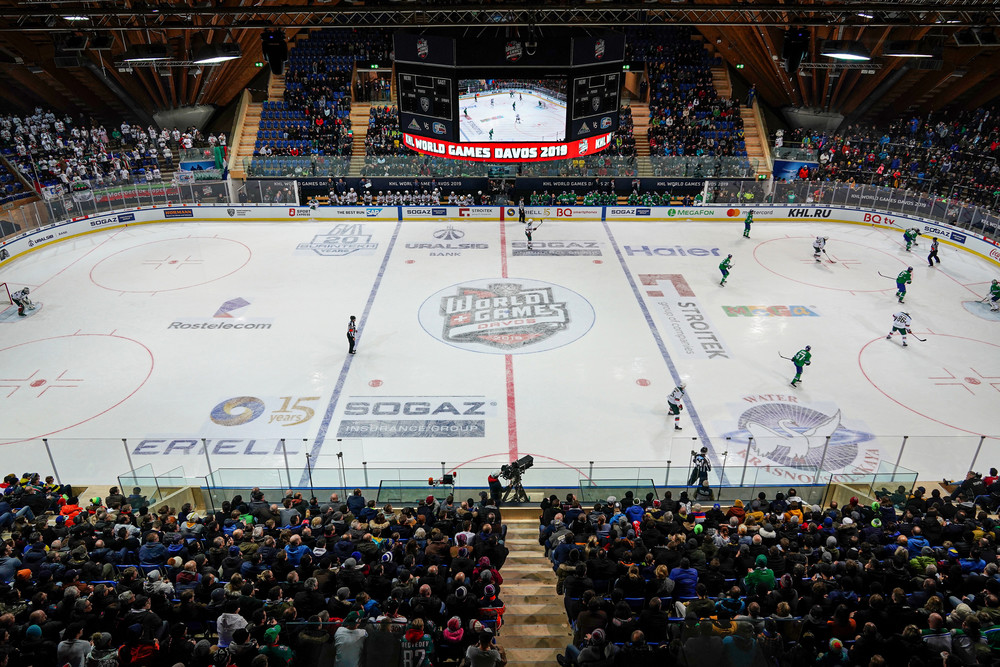 For Salavat Yulaev, Monday’s game was the start of a New Year ‘vacation’ in Switzerland, where the team will contest the Spengler Cup here in Davos. For Larsen, scorer of the winning goal, it’s something to look forward to.

“It’s the oldest tournament in the world,” he said. “I played here with Jokerit in 2015 and we had a really good week. It’s a great chance to change pace and spend Christmas up in the mountains.”

The Dane also enjoyed his first taste of KHL World Games action – and suggested that his home country might be a good host for future events. “We got a lot of fans here today and that made it special,” he said. “Maybe it would be worth doing this in Copenhagen, perhaps against Jokerit! I don’t know if it could happen, but anything’s possible.”

Georgy Kobylyansky, the KHL’s Vice President for Hockey Operations, explained that plans for next year are already under discussion.

“We haven’t made a final decision for next season yet,” he said. “We have a few ideas and as soon as there is something concrete, we will announce that.

“Thanks to Davos for all their help with the organization here. Everything was at the highest level and the ice was great. Danis Zaripov said he’d not played on such good ice for a long time.” 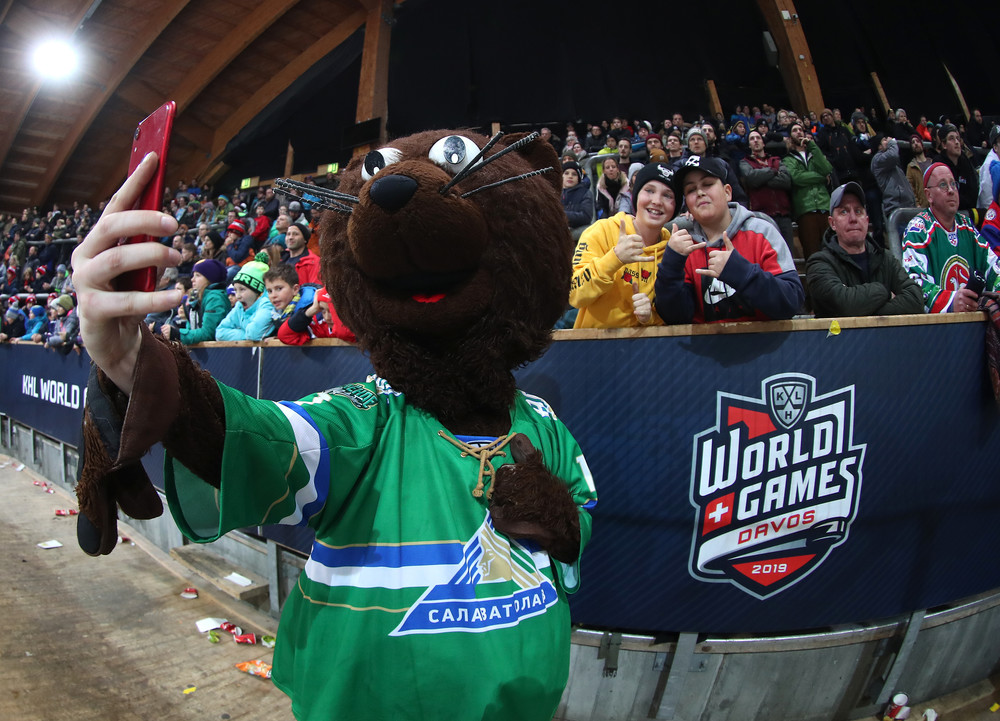