The clock is ticking! Just three more sleeps until the big day! No, not _that_ big Christmas Day, the big hockey day that’s heading for Davos, Switzerland. In a month full of special events, the latest edition of the KHL World Games is a stand-out. And this year’s festive special is a showdown between Salavat Yulaev and Ak Bars, a ‘Green Derby’ on Switzerland’s snowy slopes.

When these two teams clash, it’s always a big event. Proud representatives of neighboring, hockey-mad regions in the heart of Russia, Salavat Yulaev and Ak Bars are regularly among the leading contenders for the Gagarin Cup. Between them, they’ve won it four times in 11 seasons. Their head-to-head battles produce high-class, ultra-competitive hockey – often with a bit of an edge to it.

Yesterday’s most recent battle between the two ended in a 2-1 victory for Ak Bars, plus a fight in the second period as Kazan youngster Nikita Dynyak traded blows with Ufa’s Artyom Sergeyev.

Dynyak, 22, is establishing himself on the Kazan roster this season. This was his first taste of a ‘Green Derby’ and the game made a big impact on him. “It was a great atmosphere, the fans really got behind us and it was fun to play,” he said. “Of course, I was wrapped up in the process of the game and didn’t always notice what was happening in the tribunes, but I’d like to thank the fans for their support.”

Former Ak Bars defenseman Paul Postma, now playing in Switzerland, knows all about the Green Derby. He played in three of them during his time in Kazan – and he’s convinced that Swiss fans are in for a treat on Monday.

“These are two of the top KHL teams,” he said. “Ak Bars plays attractive, attacking hockey and I enjoyed playing with them last year.

“The KHL is, without doubt, one of the best leagues in the world, very close to NHL level. The play is fast, it is definitely more physical than the Swiss League, the fans can expect some big hits. Russian players are very skilled, they work hard in every game so there are many good reasons to come see the game in Davos.”

Postma now plays for HC Lugano, a club with its own derby rivalry against Ambri-Piotta, and he compares Russia’s Green Derby with Switzerland’s Ticino derby. “The fans here are very hot, they are some of the best I have seen in my career,” he added. “Every game in the KHL is a big one, but in a derby it’s even more so. I knew about the rivalry even before I left North America but I didn’t get how crazy it was until I was there on the ice. Scoring a goal in a Green Derby and winning the game was certainly a highlight, a very special experience for me.” 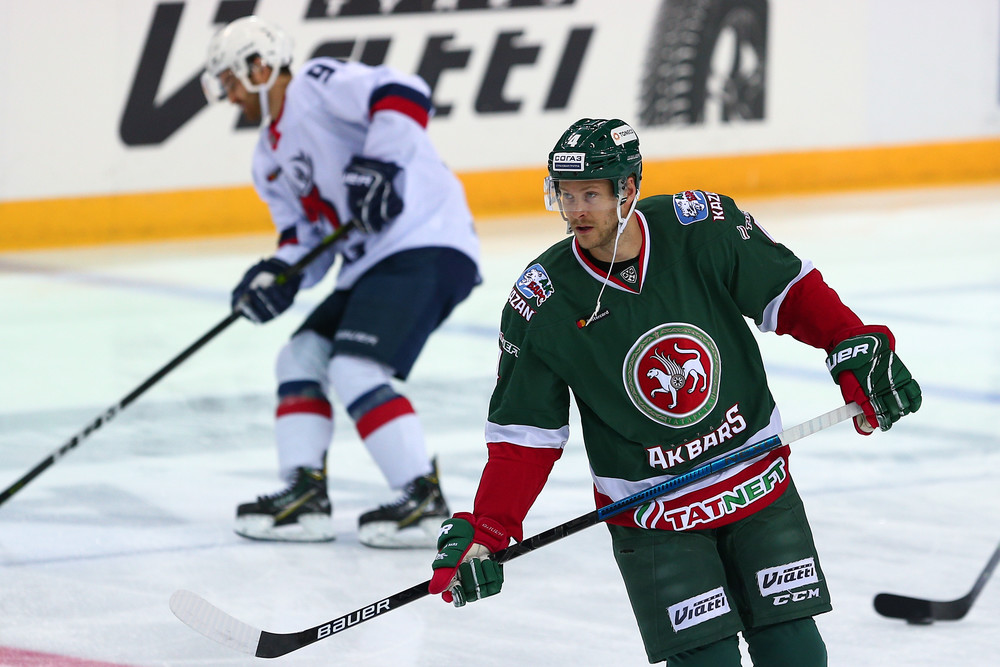 These two teams met yesterday in Kazan at the Tatar city’s old Sports Palace. Smaller and more intimate than Ak Bars’ usual home at the Tatneft Arena, it made an impact on home forward Justin Azevedo. “It’s not so big and the roof isn’t so high, so you can hear everything from the fans really well,” he said. “As soon as you come into the arena you get a sense of all the great memories here.”

Azevedo and his colleagues can look forward to another special venue next week. In Davos, there’s a similar sense of history clinging to the Eisstadion, one of the venerable venues of Swiss hockey. The local team, HC Davos, is the most titled in the country’s history; its arena has hosted the oldest and longest-running international club tournament of all, the Spengler Cup.

Many of the home fans congregate on the terrace, standing behind the nets to cheer for their heroes and generate an atmosphere with its own accent, distinct from the all-seater arenas of the KHL. It’s a happy throwback to the pioneering years of hockey in Europe, updated to include all the best features of modern stadium design.

The KHL on tour

Monday’s game is part of the KHL World Games initiative. Starting last season, the league is trying to introduce its star players to fans across Europe. The program began with games involving SKA, CSKA, Slovan and Dinamo Riga, hitting the road to thrill audiences in Vienna and Zurich. More than 11,000 tickets were sold in Austria, with similar numbers in Switzerland, as the chance to see some of the biggest stars in action captured the attention of local hockey lovers.

This season, as well as Davos, the KHL is going to Tallinn, Estonia, for January games between Jokerit and Severstal.

In the words of KHL president Dmitry Chernyshenko: “We’re opening a window to Europe!”

To get your place at the game, visit www.ticketmaster.ch. Standing places cost just 10 CHF, seats are 30-40 CHF. Under 18s get a 50% discount, children under 6 go free with an accompanying adult.