Anatomy of a rivalry: Ak Bars and Salavat Yulaev

Tatarstan and Bashkortostan. Two neighboring republics in the heart of Russia, sharing the fertile plains between the river Volga and the Ural Mountains. Each is fiercely proud of its language, its cuisine, its culture. And its hockey. When Kazan and Ufa, the capitals of the two republics, clash on the ice, it’s one of the biggest rivalries in Russian sport. This is the Green Derby, Ak Bars vs Salavat Yulaev.

Like so much in Russia, this was a rivalry that fundamentally changed as the Soviet Union collapsed. Prior to 1991, hockey in the country was dominated by CSKA, which remains the most titled club team in the world. On those very rare occasions when the Army Men did not sweep up all available hardware, the Soviet title remained in Moscow; it wasn’t until 1993 that Lada Togliatti broke the capital’s hegemony.

By then, though, a lasting challenge was stirring in the provinces. In Kazan, a new economic buoyancy fuelled by Tatarstan’s oil reserves saw the transformation of a moderately successful Soviet team into a powerhouse of modern Russia. In Ufa, it was a similar story. At the dawn of the 21st century, the two teams were primed to lead Russian hockey.

Ak Bars was the first to show, winning its first national title in 2007. A year later, the prize went to Ufa after Salavat Yulaev defeated Ak Bars in the Russian Super League Grand Final. The following season saw the start of the KHL era and, not surprisingly, these two were right up among the leaders. Ak Bars won the Gagarin Cup in the first two seasons, Salavat Yulaev topped the regular season table in those inaugural campaigns. It was perhaps not surprising that Kazan’s KHL reign came to an end in Ufa: the 2010/11 season saw Salavat Yulaev beat Ak Bars in the Conference Semi-Final on its way to winning its first Gagarin Cup. 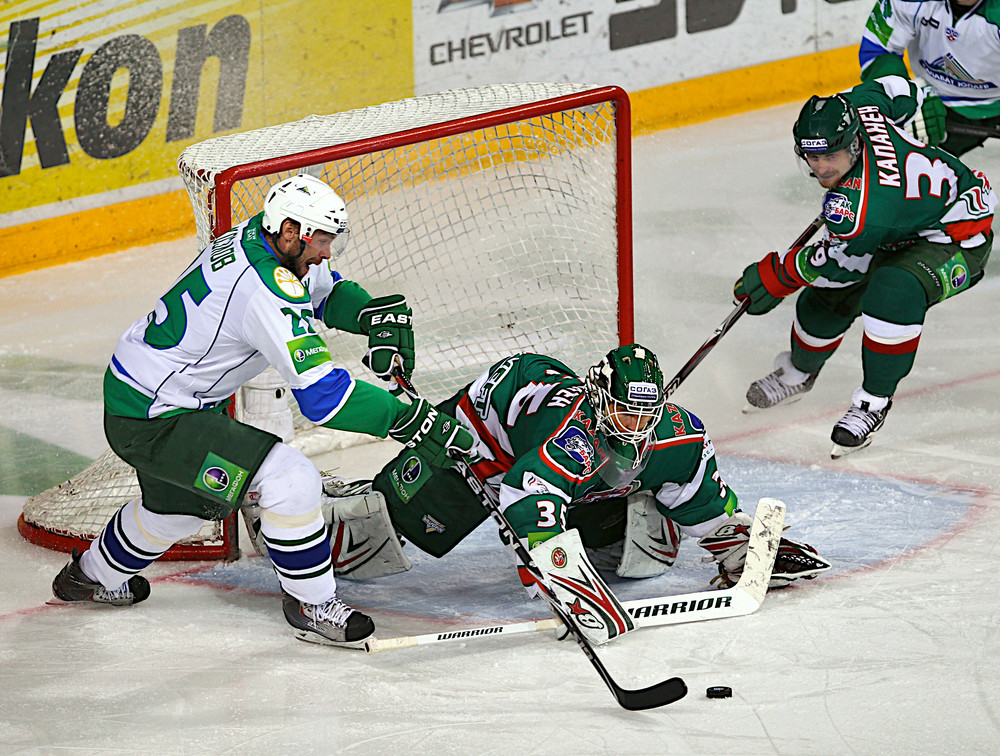 Throughout all that time, from the teams’ foundation in the 1960s to their present status as giants of the KHL, the Green Derby has formed a thread linking their progress and providing a focal point in every season. The first meeting was back in 1966 when the teams played out a 1-1 draw in Kazan; the most recent was last Saturday, when Salavat Yulaev won 3-1 in Ufa. That was the 199th game between the two, with Salavat Yulaev leading by 91 victories to 88, or 604 goals to 586.

‘Their fans would just kill me!’

If that first meeting back in 1966 was a fairly low-key affair in the Soviet lower divisions, today’s Green Derby clashes are highlights of the KHL calendar. For fans of both clubs, these are red-letter days, anticipated well in advance. Getting the right results in these games can salvage an underwhelming season, struggling against the neighbors can take the shine off an otherwise successful campaign.

And it means a lot to the players, especially those who grew up to play for their local teams. Ak Bars forward Artyom Lukoyanov, who grew up in Almetyevsk, Tatarstan, touched on the intensity of the rivalry in an interview with Sport Express earlier this year. The conversation went something like this:

Sport Express: “After the season, you could have gone to any club, not just Ak Bars.”

Lukoyanov: “Yes, I had a couple of offers that were interesting. Salavat, for example.”

Lukoyanov: “Yeah, I’m kidding. Their fans would just kill me!”

But it’s not just the locals who feel the special atmosphere of this derby. Last season, Canadian defenseman Paul Postma played in the KHL for the first time – and his first trip to Ufa with Ak Bars was something of a stand-out moment. “It was fantastic, it’s definitely the game that everyone was waiting for,” he said. “It was incredible in Ufa, one of the best atmospheres I’ve experienced in hockey.” 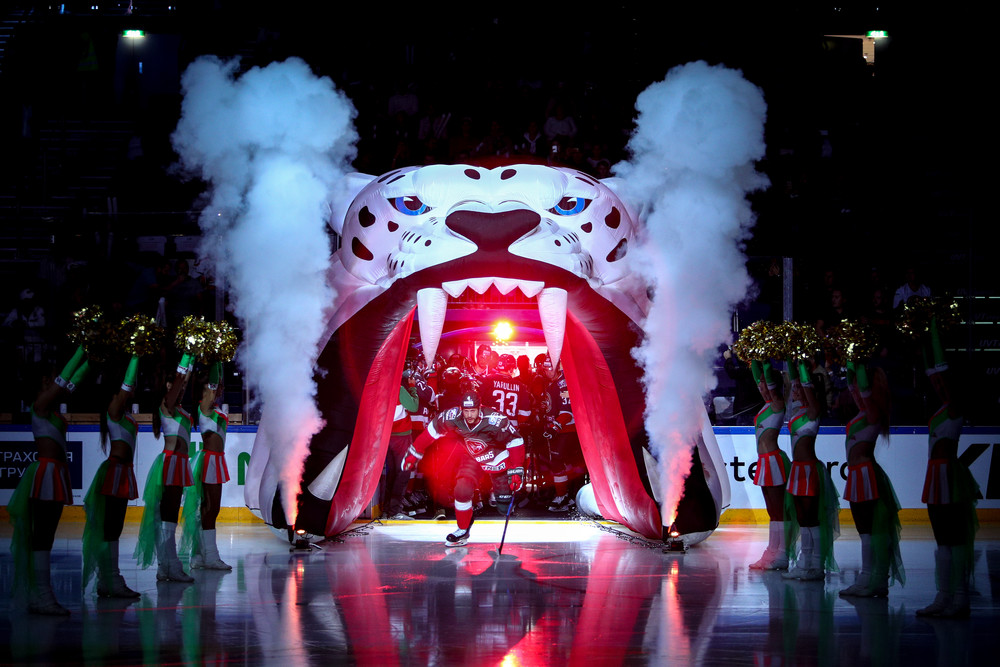 Long-standing, intense rivalries like this are at the very heart of what helps sport to thrill so many people, worldwide. You don’t have to love to baseball to know about the Yankees and the Red Sox, nor have a passion for Spain to enjoy El Clasico. And that’s why, in recent years, the ‘Green Derby’ (‘Zelyonoye Derby’ in Russian) brand has grown up around this game.

Today, games between Salavat Yulaev and Ak Bars are played out against a background of specially-designed uniforms. Starting this season, the winner of each match-up will receive the ‘Chak-Chak Trophy’, inspired by an iconic snack that has come to symbolize the hospitality of this part of the world. 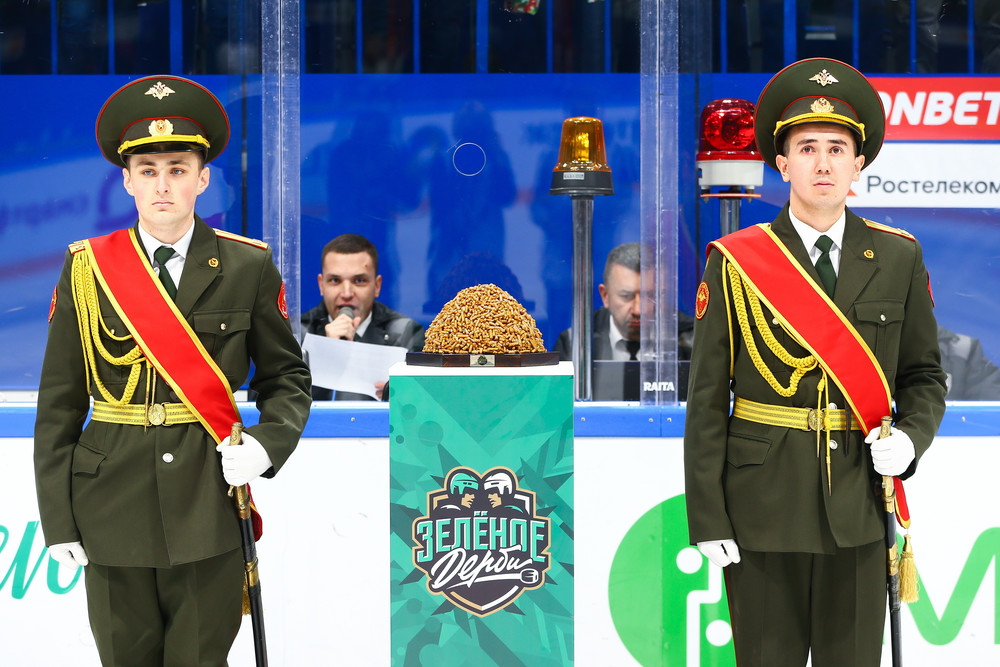 And there’s more to come. In December, the teams are set to meet in Davos, Switzerland, as part of the KHL World Games. In theory, it’s a home game for Salavat Yulaev; in practice, it’s a chance to take one of the highlights of the KHL calendar and share it with a whole new audience in the Alps. Following the success of last year’s trips to Vienna and Zurich, it’s an extension of the World Games project and it’s poised to take one of Russia’s most vigorous rivalries onto the international stage.

Attention all media! Credentials for KHL World Games in Davos 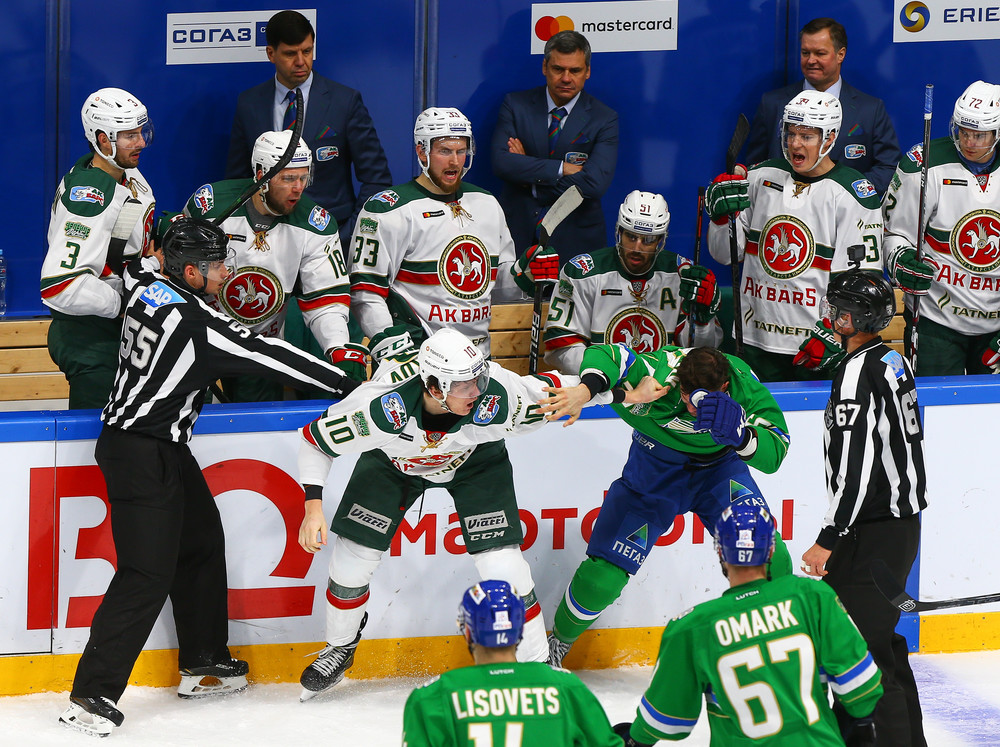