Season 12 Schedule: back to Europe, more derbies and a visit to Shenzhen

On July 11 the KHL unveiled the game schedule for Season 12. The program has been drawn up with a view to balancing the best interests of the clubs, their fans, the league’s TV partners and the national teams of the countries involved in the KHL.

The schedule was drawn up by a working party under the guidance of Sergei Kozlov, head of the department of sporting competitions, and expert Vladimir Zhidkov.

Season 12 of the KHL begins on Sunday, Sep. 1, with the Opening Cup. This year’s curtain-raiser will be a repeat of last season’s Gagarin Cup final between defending champion CSKA Moscow and runner-up Avangard Omsk.

The regular season runs until Feb. 27, 2020, a total of 153 game days. The playoffs are scheduled to start on March 1 and, if required, game seven of the grand final will be played on April 30.

Due to the change in the number of teams competing in this season’s KHL, and in the interests of sporting balance, the KHL has changed the members of each division. Torpedo returns to the Western Conference and joins the Tarasov Division. Its place in the Kharlamov Division will go to Sibir.

Each of the 24 clubs will play 62 games in the regular season. All clubs will play each other home and away (46 games). Within each division, each club will meet two more times (an additional 10 games). Each team will also play four games with three opponents from the other division in its conference (an additional 6 games, making 62 in total). In total, there will be 744 games in the regular season.

In accordance with the wishes of both fans and TV companies, most game days will feature action in both the Eastern and Western Conferences. The KHL has managed to meet almost all the wishes of the clubs, including arranging big games on key dates for each team (eg the anniversary of the foundation of the club or its city, New Year holidays, etc). Last season’s experiment of scheduling playoff games in the East and West on the same day was a success and will continue in 2019/20. This format made it easier for fans to follow the progress of both conferences and enabled more games to be shown live on federal TV and KHL TV. Throughout the playoffs, team will play every second day. 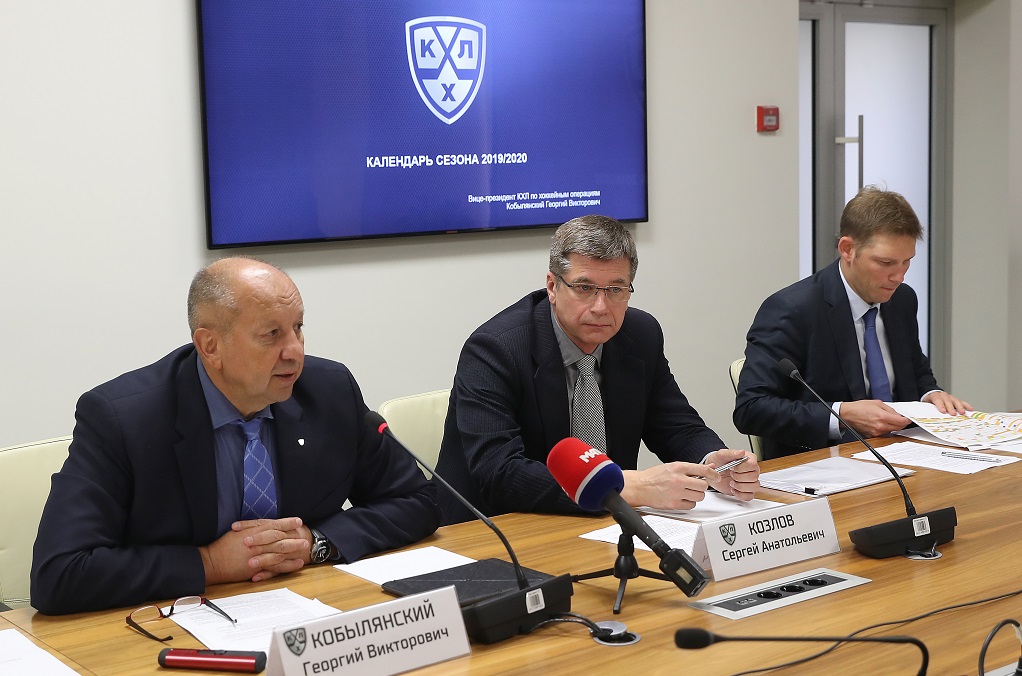 The schedule for 2019/20 has a few new features. The make-up of the divisions has changed and now all four divisions will play with six teams. We’ve also upped the number of big games, with the top rivals facing off six times over the course of the season (such as the CSKA vs SKA Army Derby or the Ak Bars vs Salavat Yulaev Green Derby).

This year’s schedule is also the most even in terms of the spread of games per day (4.89 on average). Over the course of a 62-game campaign, teams will typically play 10-12 games each month and not more than 13 (with the exception of Traktor, which plays 14 games in one month). This means, unlike previous years, there is no noticeable ‘front-loading’ of games in September and October. For the most part, road trips will not be longer than three games (with a few exceptions early in the season for Kunlun Red Star and Traktor).

After the success of recent seasons, the KHL is continuing to put games on tour. Under the KHL World Games banner, Salavat Yulaev will play a home game against Ak Bars in Davos, Switzerland, on Dec. 23.

In addition to the World Games, the KHL will go to Almaty, Kazakhstan, for the first time. On Sep. 17 and 20 Barys will go to Kazakhstan’s second city to host Spartak and Traktor. This forms part of the KHL’s on-going strategy to develop hockey in more and more cities across Eurasia.

The Chinese city of Shenzhen is another new destination for the KHL. At the start of the season, Kunlun Red Star will play six games here (two each against Salavat Yulaev, Traktor and Neftekhimik). In January, Jokerit will continue its popular series of visits to Tallinn. The Estonian capital will welcome the KHL for the third time; this season sees Jokerit playing back-to-back games against Severstal.

The playoff structure is largely unchanged from last season. For the convenience of supporters, the first two rounds of post-season will see action from both conferences on each game day. This avoids a glut of games all starting at the same time and makes it easier for fans to follow all the action in real time as the playoffs unfold.

Over 11 previous seasons the KHL has accumulated a wealth of experience in drawing up a successful schedule, keeping in mind that every campaign brings its own challenges and requirements. As a result, every year means starting afresh, trying to balance the wishes of all our stakeholders: clubs, national teams and, first and foremost, the fans. Our principle aim is to ensure that it is as easy as possible for everybody to get to see their favorite teams in action, and to ensure that a trip to the hockey brings only positive emotions. I hope that the schedule for the 2019/20 season is convenient and well-balanced for all concerned and I’m looking forward to seeing you all at the hockey.