Back in Zurich, the KHL World Games continued with the match-up between table-topping CSKA Moscow and play-off chasing Dinamo Riga. The Army Men wanted to extend their long winning streak, Dinamo was out to show that it could go one better than Monday’s brave loss against SKA. But before that, there was the small matter of meeting the coolest dad in Switzerland this week and catching up with some Danish dreams.

Dinamo’s Brandon McMillan was one of three players chosen for the promotional posters that went up in Zurich ahead of this week’s World Games – and he likes the company he’s keeping!

“Yeah, it’s funny, especially when I see myself up there next to Pavel Datsyuk,” he told KHL.ru. “When my kids saw it, they were like, ‘Dad, that’s so cool!’.

“These games in Zurich are great for the league, for the players and for the fans in this part of the world. I’m really enjoying the KHL’s expansion process in Europe.” 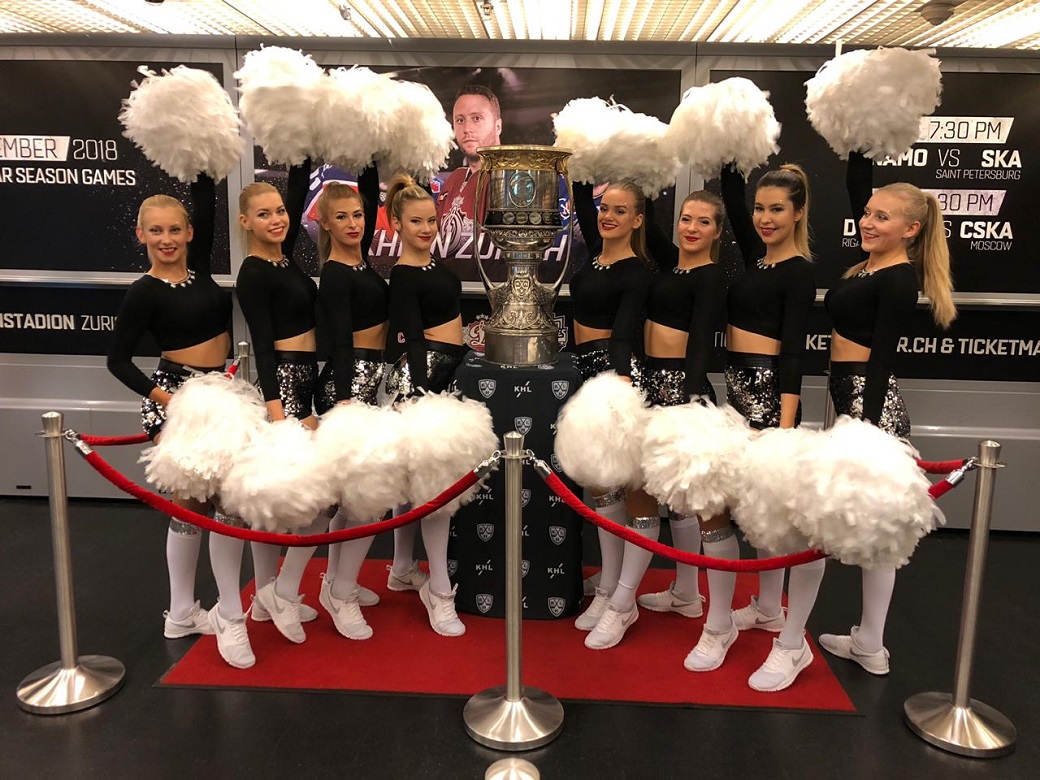 McMillan wasn’t the only player enjoying himself in Switzerland. For CSKA forward Linden Vey, it was a happy return to a city where he helped Zurich Lions to NLA glory last season. “I’ve only the happiest memories of my time here,” he said. “As soon as I heard that we’d be playing a game here I marked out the date on my calendar. I don’t play for the Lions any more but I’m looking forward to seeing some old friends at the game.

“The World Games is an excellent idea, as a player it’s nice to get a change of scenery and to play in front of a different audience. I hope Zurich will be at least as good as Vienna.”

His team-mate, Jannik Hansen, was dreaming of a similar event in his homeland. “It’s a good experience,” he said. “To be honest, I’d love to do this in Denmark. A game against Jokerit in Copenhagen, for example, would be a great idea. If there’s a chance to play in other cities, we need to explore that. It’s good for the development of the league and the game. The World Games are a terrific project.”

Club president Igor Yesmantovich was even more ambitious: “Where else would we like to play? We’d be happy to go to Antarctica!” he joked. 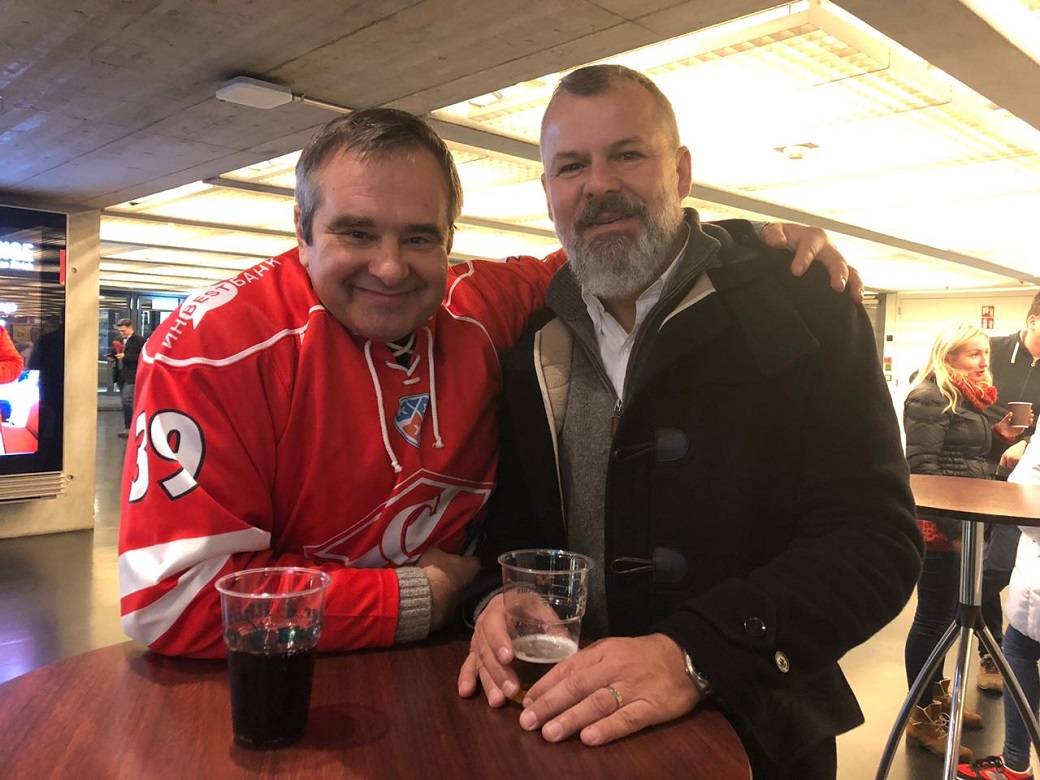 More than just a number

The two games played in Zurich attracted attendances of around 5,000 each. At first glance, that figure might seem disappointing in an arena that holds 11,200. But, as veteran coach Vladimir Yurzinov explained, events like this are about so much more than just numbers.

“This is the first time the KHL has staged its games in Europe, and it’s really good,” he said. “Of course, we would have liked more people to come and watch but the fact that we came here is very important. It’s not just about promoting hockey, it’s about giving the young guys on these teams a bit of international experience. It’s good that people are watching us, and we get to watch them.”

Dinamo Riga has special practice with kids in Zurich

The event also captured hearts and minds among young Swiss players, with Dinamo staging a master-class for local youth teams on Tuesday. Head coach Girts Ankipans explained: “A lot of our guys did master-classes like this in the summer, so we were happy to do something similar here. We showed them what we could do, and I think the kids enjoyed it. It’s always interesting working with them, you can see that fire in their eyes.” 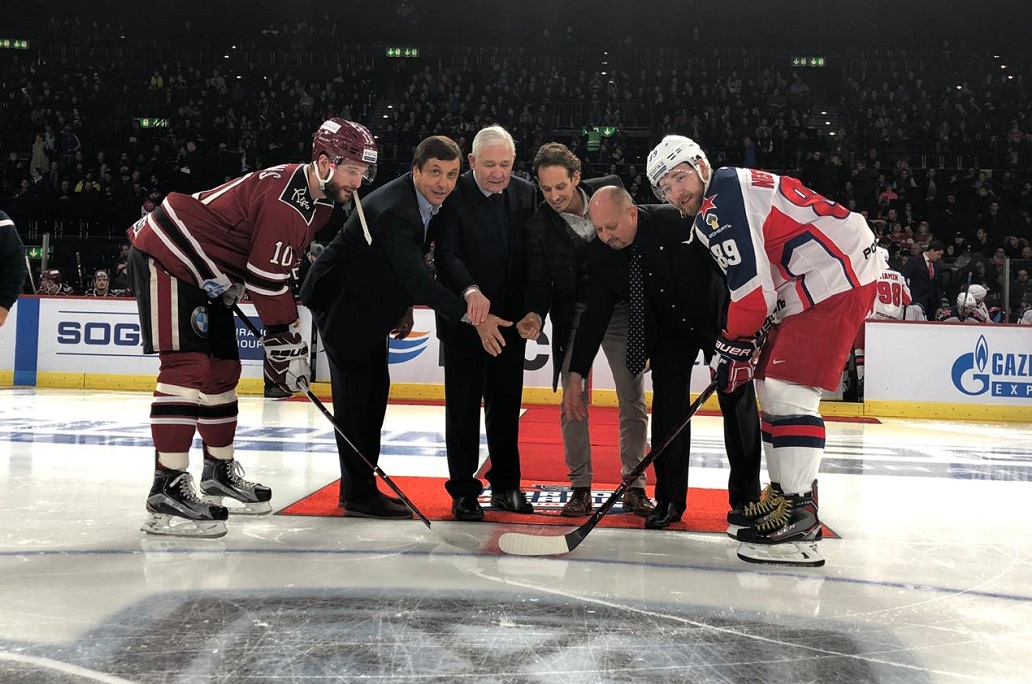 The pre-game formalities saw Patrick Fischer, head coach of Team Switzerland and, briefly, a player in the Russian Super League with SKA, join Yurzinov and KHL vice-president Georgy Kobylyansky for the ceremonial face-off.

Once the fanfares were over, the Army Men got down to the serious business of extending a 13-game winning streak and maintaining their place at the top of the KHL table. How serious were they? Well, 21 shots to four in the first period serious. The Swiss public got a glimpse of CSKA at its swaggering best and only a strong performance from Timur Bilyalov kept Riga in contention at 0-2.

Konstantin Okulov opened the scoring in the 13th minute and Kirill Kaprizov, one of the faces of this CSKA team, added a second. Russia’s Olympic hero needed just seven seconds to convert a power play chance after Kevin Clark took a minor.

The middle frame could hardly have been more different: this time the teams traded just eight shots on goal. Dinamo’s improved defense was breached once more, however, when Nikita Nesterov made it 3-0 right before the intermission.

Into the third period and CSKA took the game away from Dinamo. Artyom Blazhiyevsky struck seconds after the break to make it 4-0 and Jannik Hansen added a fifth with a simple finish at the back door. That completed the scoring; for CSKA, two outings in the KHL World Games have brought two wins and a 14-0 goal differential.

- CSKA made us to make mistakes; it was a good lesson for our young players. We didn’t satisfy with our performance, but it was world-class organization of these games in Zurich.

- We satisfied with our performance. Everything was at the same high level as month ago in Vienna. It’s good experience for our players to refresh their mind in a new city.

KHL doesn’t announce yet where next season of KHL World Games would be, but General Secretary of Ice Hockey UK Andy French unveiled that April 2019, teams from our league will come to his country.

“KHL World Games showed the high caliber hockey. There are not much battles, but speed of the game is great. Our national team promoted to top group for first time in 25 years and we struggled with finding opponents for preparation. We have an agreement that three KHL clubs will come to us in April, one of these games would be held in Sheffield” said French.

“We're working on bringing KHL game in France, and we have a question why don't create a team there? Of course, we'll need a time, but people are ready to see KHL here, especially because of Stephane Da Costa” said Luc Tardif, president of France Ice Hockey Federation.