The second phase of the KHL World Games got underway in Zurich, Switzerland. This time, we saw a hard-fought, competitive hockey game in an arena that reminded one player of a theatre. We heard about four clubs in talks to join the KHL and, in the end, we saw a Pavel Datsyuk goal clinch victory for SKA to keep up the pressure on CSKA at the top of the Western Conference.

After the teams’ had the pre-game skates in Zurich, both sets of players had plenty to say about the experience.

For SKA’s Andrei Kuzmenko, the Hallenstadion resembled a stage as much as an arena. “It feels like today we’re in a theatre getting ready to put on a show,” he said. “The seats are warm, there’s even a bit of velvet there. I’m sure everyone will enjoy playing somewhere new, getting a change of scenery.” 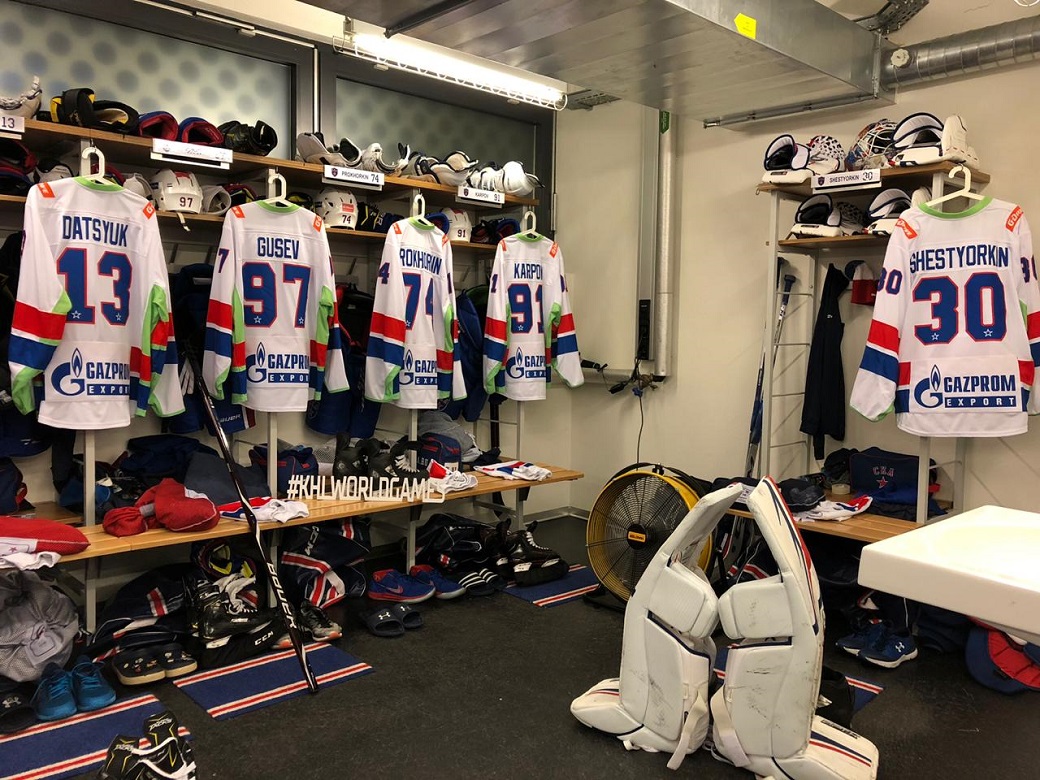 Dinamo defenseman Mathew Maione, Canadian born but with Italian roots, had some suggestions about where the next KHL World Games might go. “Maybe it’s worth playing in Italy,” he said. “In Milan or Rome. I don’t know if there’s an ice rink in Rome but maybe they could do something with the Colosseum. It would be great to play in a warmer country like Italy, Spain or Greece.”

Maione, in his first season with the KHL, is right behind the World Games concept. “It’s an excellent event and it can only help to promote hockey,” he said. “I’m enjoying myself in the KHL, it’s great to play games in so many different countries.” 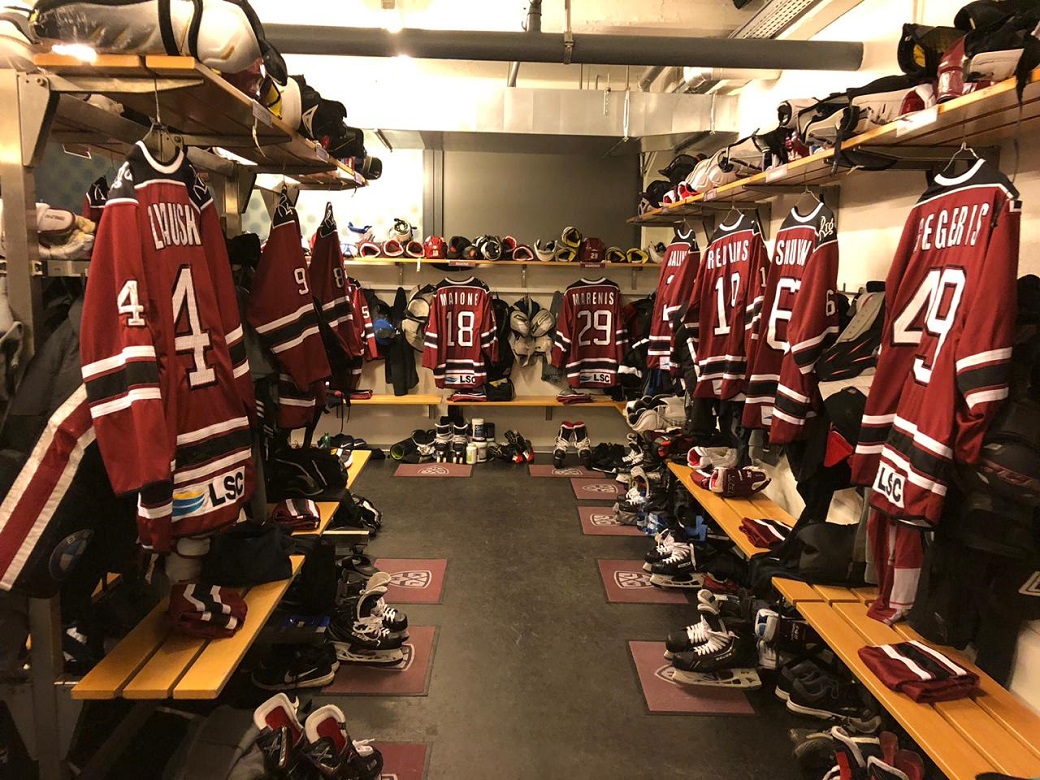 Pavel Datsyuk was forced to miss SKA’s previous World Games encounter in Vienna last month. The Magic Man is fit again now, though, and fans in Switzerland will get a chance to see him in action. He was expecting a tough game and a big occasion. “We’re facing a serious opponent and, if there’s a big crowd, it’s going to be a great event,” Datsyuk told reporters. “Riga plays good, quick hockey; the team always pushes you all the way and you never get an easy game against them.”

And Datsyuk’s thoughts on Switzerland? “Cheese, watches, rivers, mountains, skiing … and some good hockey players! The national team has got to a couple of World Championship finals in recent years.”

The only problem was a minor one – and an unusual one. Viktor Tikhonov, hoping to catch up with his family when SKA had some free time in Zurich, got stuck in traffic and missed his date. The reason for the traffic jam? A Santa Claus parade as advent draws closer! 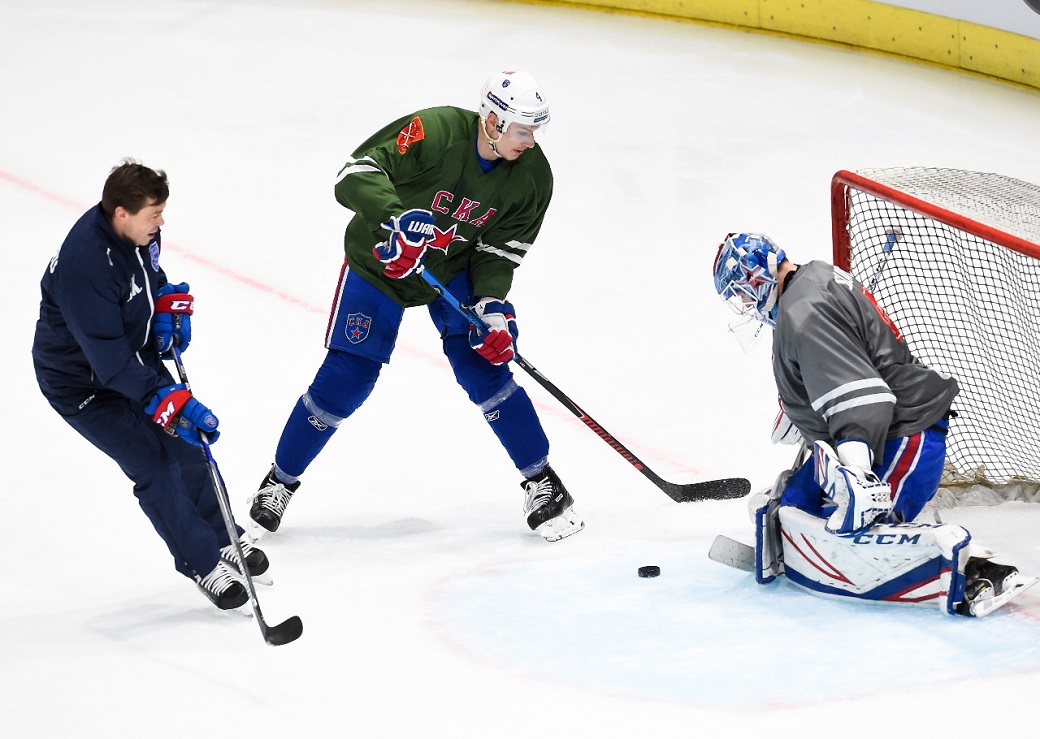 For KHL President Dmitry Chernyshenko, coming to Switzerland is an important part of promoting the league to a wider audience.

“Switzerland is an interesting market for us, and probably one of the toughest to crack because hockey in this country is already at a high level,” he said. “We’re hoping to show the high level of our game, that’s the main thing that the KHL wants to put in front of fans in Europe. This is our product, we’re proud of it. These games out on tour help us to conduct research and explore new markets, we’re gaining priceless feedback from this.

“As for the prospects of new countries in the KHL, there has to be a two-way agreement between the local hockey federation and the league,” Chernyshenko added. “Switzerland is not one of the countries that is high on our list at the moment – there are other places where work has progressed further. At the moment we are in talks with four potential new participants and once we have all the necessary documentation in place, we might be able to make an official announcement.” 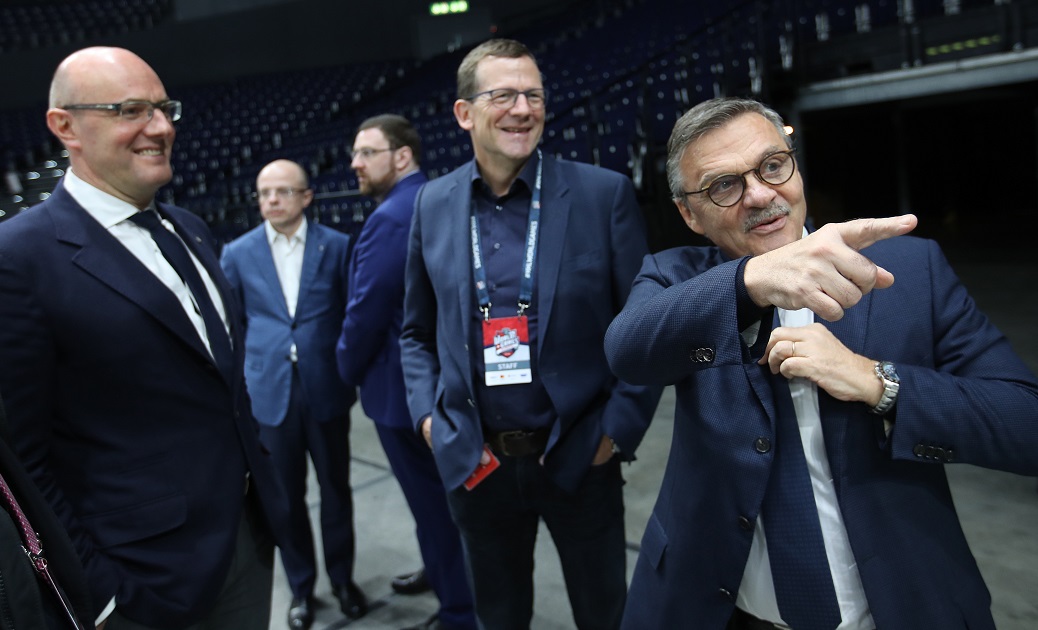 For Russian Hockey Federation vice president Roman Rotenberg, the future could incllude similar events in Paris, London, Berlin or Copenhagen. “Today we’re seeing people standing in line to buy our merchandise,” he told ITAR-TASS. “That’s great for the popularization of the KHL and Russian hockey. So we need to keep looking at leading countries and big cities where we can play.” 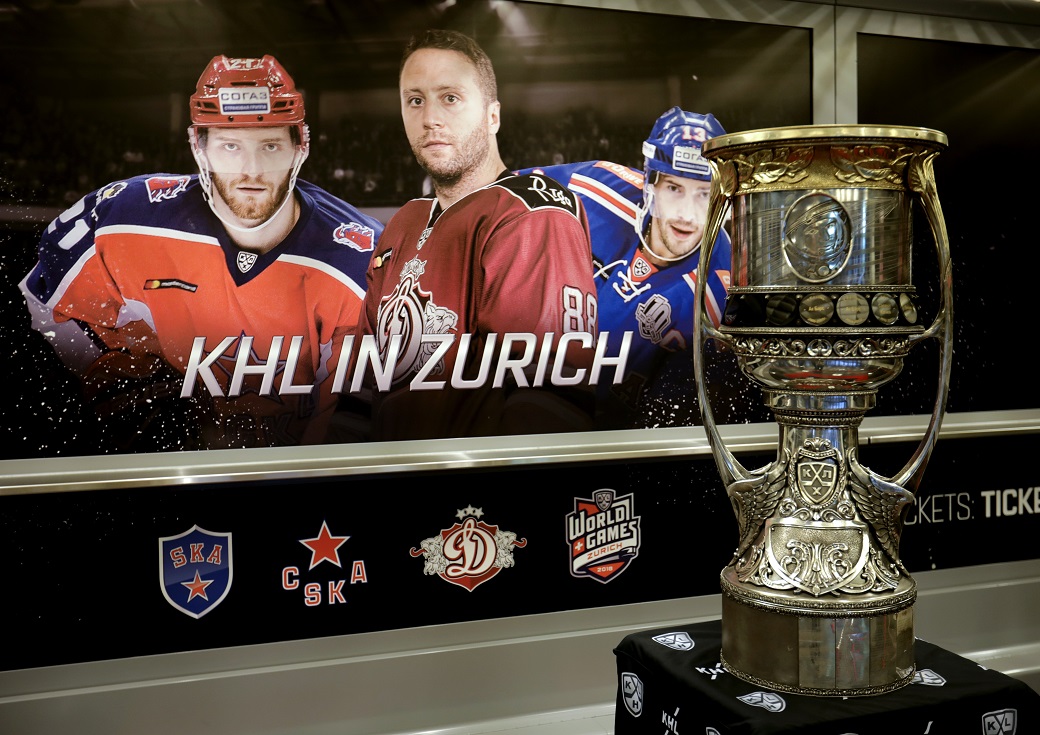 IIHF President Rene Fasel, whose organization has its HQ in Zurich, was a guest of honor at the game and took part in the ceremonial puck drop. “This is something special for Switzerland, the KHL came to us,” he said. “This is a good step for the league to introduce itself to Europe. I know that fans in Switzerland follow the KHL and I often hear people telling me how they like the level of hockey in this league.” 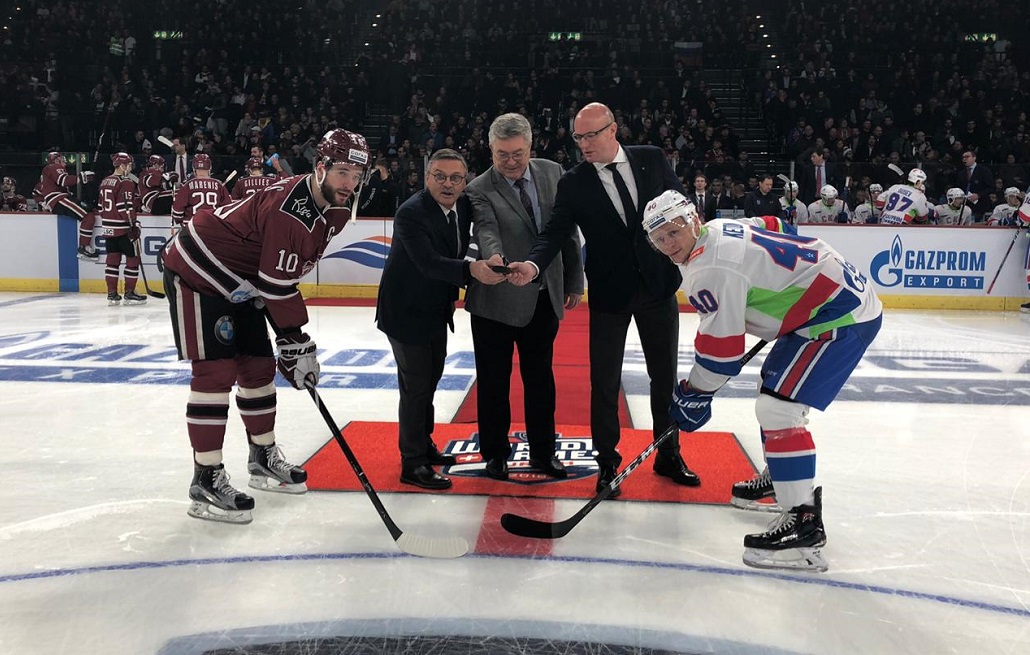 For some fans, the prospect of travelling across Europe to catch a game is a bit too much. But SKA season ticket holder Alexei Fyodorov was determined to get to this one – and took the chance to meet up with old friends now living in Germany.

“I never miss a SKA game,” Fyodorov said. “So when this one came around, I got the idea of coming here and catching up with my buddies in Zurich. So I jumped in my car and came.”

His friend, Pavel Golubev, came to Switzerland with his family. “We live in Germany, in Freiburg,” he added. “We’re huge hockey fans and for the last eight years we’ve followed Russia to the World Championship. Of course, if there was a KHL team in Germany, we’d be delighted to go and watch them.” 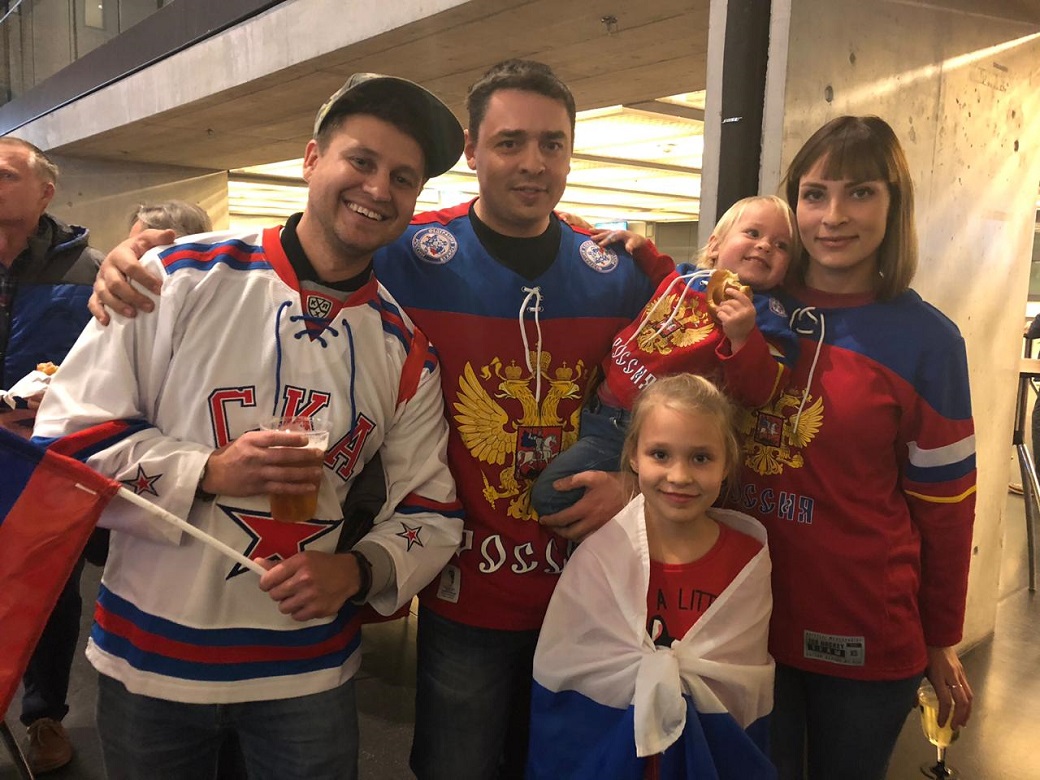 It wasn’t just SKA supporters. Dinamo was represented, among others, by Ivans Sauskas. “I’ve supported Dinamo since 1977 so I could hardly miss this game,” he told KHL.ru. “It was 2,000km to get here, 22 hours on the road. Wherever possible, I follow my team to every arena in the KHL so if we are playing here, that’s where I have to be. It’s not my longest trip, that was to China.” 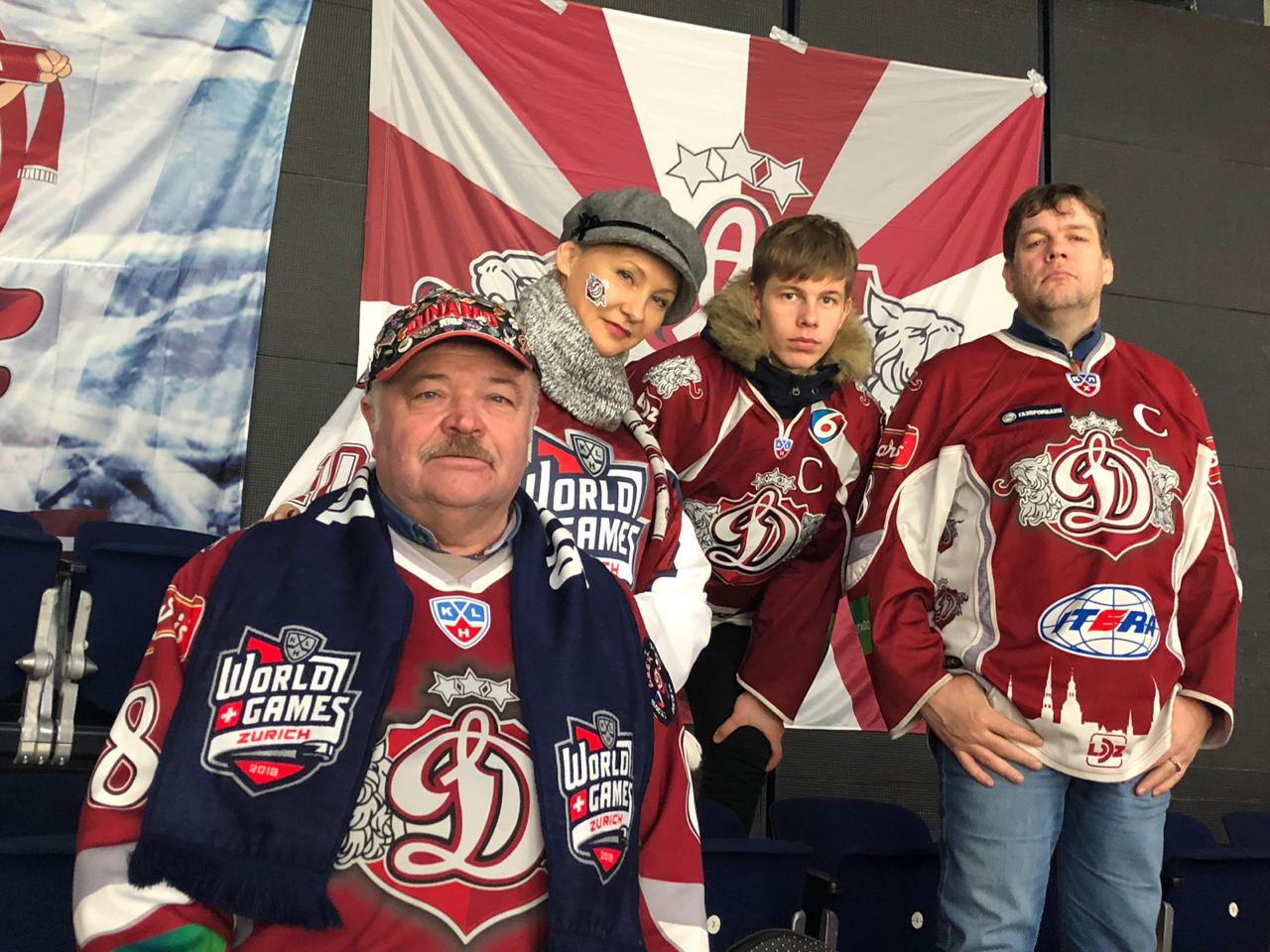 If there was one thing missing from the first KHL World Games experience, it was a genuinely competitive game of hockey. CSKA and SKA both displayed their class against Slovan, but two blow-outs didn’t always highlight the depth of talented teams in the league.

Fortunately, the match-up between Dinamo Riga and SKA was much tighter. A month ago, as Slovan and CSKA faced off in Vienna, the teams met and played out a one-goal game with SKA taking the verdict. Tonight, it was a similar story. The Petersburg team took the lead in the fifth minute thanks to Nikolai Prokhorkin. However, SKA goalie Magnus Hellberg also deserved plaudits after standing up to a Latvian onslaught during a couple of early power plays for Riga.

In the second period, Dinamo tied the game through Kevin Clark; the Canadian forward got on the end of a well-worked move and put a wrist shot past Hellberg.

Then came Pavel Datsyuk. This legend of Russian hockey might be approaching his 40th birthday, but he remains a consummate big game player. And here, again, he was on hand to restore SKA’s lead early in the third period. Nikita Gusev’s defense-splitting pass found Datsyuk in space in the right-hand circle; a player of his quality needs no second invitation to go for goal.

There was more drama ahead, with SKA’s Dinar Khafizullin ejected from the game with 10 minutes left. Dinamo pressed for a tying goal – Frenks Razgals failed to make contact with Hellberg seemingly beaten, the SKA goalie denied Mikelis Redlihs and Mathew Maione fired one against the frame of the goal before the Army Men killed the penalty. Reprieved, SKA made the game safe with an empty net goal from Alexander Barabanov.