Ilya Vorobyov’s first game in charge of Team Russia ended in defeat for an experimental roster in the opening match-up of the Czech Hockey Games in Yaroslavl.

Russia went down 2-1 against Sweden as Vorobyov ran the rule over several players hoping for a call up to next month’s World Championship in Denmark. The roster included a clutch of Olympic champions, including Nikita Gusev, Alexander Barabanov and defensemen Artyom Zub and Vladislav Gavrikov. There were also appearances for three players whose seasons in North America have come to an early end: Evgeny Dadonov, who scored Russia’s goal, Pavel Buchnevich and Nikita Soshnikov.

The game got off to a bright start, with both goalies called into action early on. Viktor Tikhonov had Russia’s best chance, but Kunlun Red Star’s Magnus Hellberg was equal to his shot. Sweden went ahead late in the frame when Sibir’s Patrik Zackrisson scored on the power play.

In the middle frame, Dadonov took control of the action. Playing on a line with Gusev and Amur’s Alexei Byvaltsev, he was at the heart of much of Russia’s best play. Not surprisingly, then, he tied the scores on an early power play and, were it not for some find goaltending from Hellberg, Russia could easily have gone in front.

Missed chances came back to haunt the host, though. Sweden dug in, and went back in front thanks to Fredrik Handemark 11 seconds into the final frame. That blow seemed to hit Russia hard, and the Swedes began to test Igor Shestyorkin between the piping. As Russian pressure built up, an inopportune penalty on Soshnikov took the momentum away from the home team: Sweden looked dangerous on the power play, but could not find another goal and ended up holding on for a narrow victory. 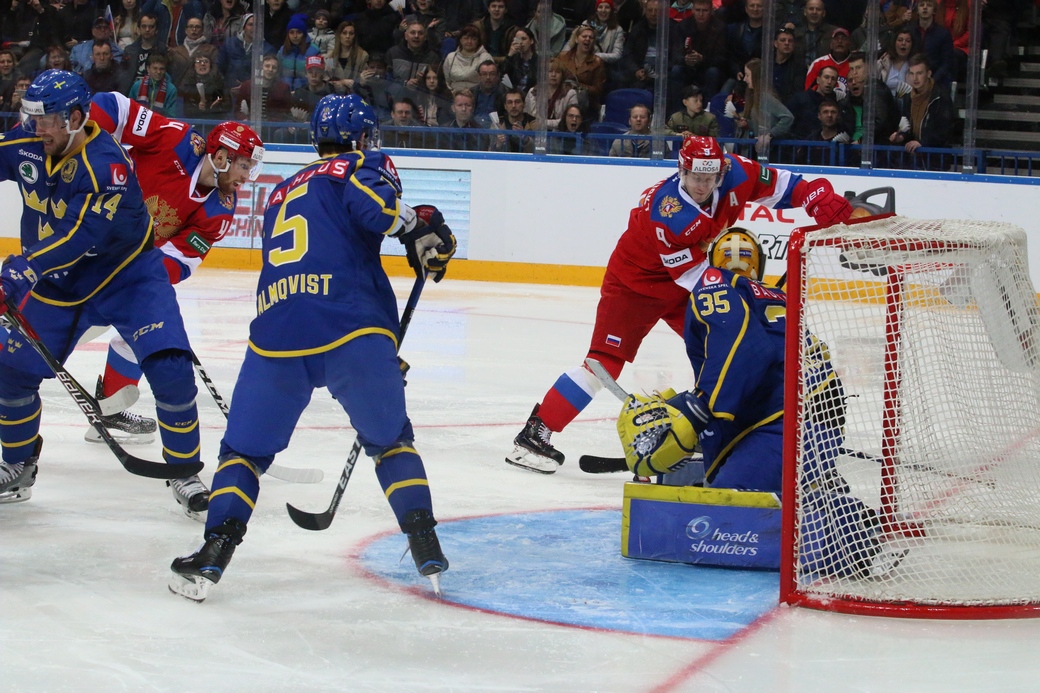 “The guys have only just come together. Tonight we’ll look over what happened and tomorrow we’ll show the guys where we need to work harder. I hope the guys from the NHL will be further along with their adaptation – you could see today how Zhenya Dadonov played. I’m happy with some players, others I’ll need to think about. I liked Byvaltsev’s line today.

“The main problem is that we can’t make mistakes at this level. It all starts from there, and only afterwards can we talk about our skills and so on. We cannot keep making our own mistakes. I warned Nikita Tryamkin about this before the Norway game and we will keep talking about it and thinking about it.”

“In the first period I was struggling to get used to the bigger ice but it got easier as the game went on and I got into the action more. There were a couple of shifts that went really well for us but I think the main problem was a lack of game time together and a lack of chemistry. We need better communication out there on the ice, but it’s all part of the process. We’ll see how it goes.

“We’ve got a young coaching staff here, they’re full of ideas and suggestions. On the bench, they kept it nice and calm, I really liked it.”

“It was great to come to my home town and play for my country. I’d like to thank everyone who came along to support the team tonight. It was pretty lively in there, there was even a wave going at one point.

“I had lots of friends and relations in the crowd, it was a terrific atmosphere.

“We’ve had some changes in the coaching set-up, so a few of the requirements are different now. We’re getting used to that, working and preparing.”