The Kontinental Hockey League Board of Directors held a meeting today in Moscow, the outcome of which included the approval of the structure for the KHL Championship 2018-19 season, an outline of the draft version of the match schedule for the new season, and the identity of the host cities for the 2019 Week of Hockey Stars.

Chairman of the Board Gennady Timchenko opened the meeting with a minute's silence in memory of the victims of the tragedy in Kemerovo.

The Development Strategy, currently being implemented and timed to run until 2023, received the continued approval of the Board on March 23. The main points of the Strategy had been presented to and approved by the Board back in May of 2017, after which the document was finalized after some fine-tuning to accommodate the views of the League's clubs, the Russian Hockey Federation, and the Ministry of Sport of the Russian Federation.

A hard salary cap with no star exceptions

On behalf of the KHL Board of Directors, a Working Group was created, comprising representatives of 8 of the League's participating clubs alongside members of the Board, and tasked with devising and presenting further proposals designed to bring in a lower salary cap. Based on the report submitted by the Working Group, the KHL Board of Directors decided that the 2020-21 season will see the introduction of a "hard" ceiling for players' salaries, to the amount of 900m rubles and with no exceptions made for "star" players. The decision takes into account the fact that many clubs needed a longer transition period in order to honor the terms and conditions of existing contracts.

This new wage ceiling is to be phased in, with a “soft” salary cap in place for the next two seasons. Under a “soft” cap, clubs may exceed the given limit if they pay a “luxury tax” amounting to 20% of the sum by which the club exceeds the stipulated limit. In the 2018-19 season, the cap will fall to 850m rubles, and for the 2019-20 season it shall be reduced further to 800m rubles, while the “luxury tax” will increase to 30%.

When calculating the "hard" ceiling, the Working Group decided to exclude performance-related bonuses, be they individual or team payments, and bonuses for reaching medal places. Nor will the salary cap include wages of players aged 21 or younger.

- Back in December of last year, on the initiative of one of the clubs, we set up a Committee which included representatives of eight teams. Today, with virtually unanimous support, we adopted a variant in which a hard cap of 900m rubles will be phased in by the 2020-21 season, without any “star player” exceptions. I argued for a scheme with a ceiling of 600m and exemptions for two stars, believing that this would give the clubs more freedom to maneuver, as the most important result we are trying to achieve is the most even distribution of star players among the clubs, and any player who does not perform to a high level of skill would have a salary which corresponds to his level. However, the clubs chose the option we have put before you, and there is sense in resisting. The decision has been made.

In accordance with the rules governing the imposition of penalties on clubs which are more than two months in arrears with the payment of players' salaries, the Board of Directors has fined HC Admiral of Vladivostok for its outstanding debts of December 2017. The fine amounted to 20% of the sum owed by the club to its players.

- All the clubs have submitted the required financial documentation for next season, as well as their budget details. However, there were 11 clubs which still owed money to their players. The new amendment to the Regulations, according to which penalties are imposed for outstanding debts which remain unpaid for 2 months or longer, has led to a vast improvement in the employer-employee relationship at the clubs. Now we only have one club still in debt to its players, and that club has been fined. All the others have met their obligations in full. I think that this decision was a timely one, and the changes to the Regulations have given a positive result for us.

List of participant clubs in the KHL Championship 2018-19 season

The Strategy stated the need for changes in the composition of the KHL Championship by reducing the number of clubs to 24.

For this purpose, complex analysis has been performed to assess the potential of each participant club in the Championship, This process was introduced for the 2016-17 season, and comprises an assessment according to 8 parameters, ranked by importance, of which the most important are the team's results on the ice.

Wearing a Hard Salary Cap. On the League’s Long-term Strategy

The current ratings place the following three clubs – Severstal, Lada, and Ugra – outside the top 24. Of these, Severstal's poor rating is mitigated by the impressive progress made by the club over the 2017-18 season. The Cherepovets team finished 8th in the Western Conference standings, thus qualifying for the playoffs for the first time in five seasons; there was an increase in attendances; the club does not rely on state funding; and the club is punctual in payment of players' salaries.

Ugra and Lada, however, performed poorly on the ice, have an over-reliance on state funding (respectively, 82% and 70%), and neither club shows a high demand among the TV audience (occupying, respectively, 27th and 25th place in the rankings). Furthermore, these clubs have a low budget for players' wages, which makes them uncompetitive in the transfer market. 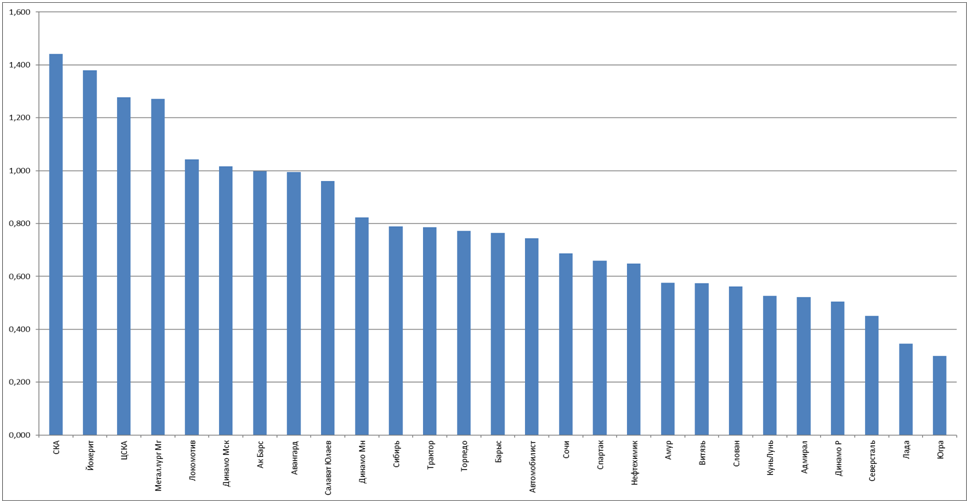 The final ranking of clubs for the 2017/2018 season will be calculated after the Gagarin Cup final and published on the League's official website.

Based on these rankings, the Board of Directors determined the participant clubs for the new season. The 2018-19 Championship of the Kontinental Hockey League will be contested by the following 25 clubs:

– Let me remind everyone that the goal of our Strategy is to raise the sporting quality of the clubs, reduce the share of their state funding, and increase the commercial potential of the League. The decision was made on the basis of the ratings, and the logic behind the ratings is in the public domain, I think everyone concerned has already analyzed this. The most important parameter was the teams' results. Our rankings placed Ugra, Lada and Severstal outside the top two dozen teams, but I hardly need to list all the good work that Severstal has demonstrated this season by showing how a club can really change. For the first time in 5 years, this team made it to the playoffs, and battled admirably against the champion, SKA, to whom there is no shame in losing. Their attendances increased by 13 percent, and there was an especially pleasing increase of 57 percent in television demand for matches involving Severstal. The club also installed the high quality lighting equipment demanded by the League.

The highest share of state financing of any clubs in the League were to be found at Lada (70%) and Ugra (82%), and both these clubs aroused little or no TV demand. The budgets for players will not make either team competitive. We expect that the state funds which were spent on these outsider clubs will now, under the control of the Russian Hockey Federation, be directed to children's and junior sports, and the construction of new rinks to help nurture new talent - young players who will grow up into high achievers in the sport.

Schedule for the 2018-19 season - more games between major rivals

The draft version of the 2018-19 season match schedule includes an increase in the number of games played by each team in the regular season, to at least 60. This is due to the calendar accommodating more games involving crosstown and regional rivals, and in general, teams in close geographical proximity, as these arouse the most intense interest among the target audience.

The opening match of the 2018-19 KHL season is scheduled for the 1st of September, and there will be 5-day breaks in the season for each stage of the EuroTour.

The final schedule for the new season is due to be published in June, following coordination and consultation with all the participating clubs in the Championship.

- The proposed playoff dates are February 21 to April 25, but now we must fine-tune the schedule to take into account the wishes of all the clubs,and collate all the information regarding the use of the arenas we have, we hope that by mid-June we will publish the calendar.

To improve and strengthen the transparency and efficiency of our clubs, as well as to facilitate the strict implementation of the principle of Financial Fair Play, the League has established a Committee to monitor the financial activities of the member clubs. The main tasks of this Committee are to help improve the commercial efficiency of the clubs and increase their financial stability.

- This Committee will carry out on-site inspections, work with primary documentation, prepare statistics, and from this will create a benchmark system. We reasoned that even if we bring the costs of an average club to a single median, it would bring in savings of several billion rubles. As you will no doubt remember, we are doing our best to reduce the burden on federal and regional budgets to the tune of 12 billion rubles, and this will be a good contribution to our fund.

The League has chosen the venue for the 2019 Week of Hockey Stars. The biggest show of the season for three leagues – the KHL, JHL and WHL - will take place in January of next year and will be hosted by the Republic of Tatarstan. In the period running from the 12th to the 20th of January, the region will be the stage for live, star-studded hockey tournaments and a range of activities for fans across several cities:

On the 12th and 13th of January, Nizhnekamsk will host the WHL All-Star Game and JHL Challenge Cup.

On the 19th and 20th of January, Kazan will host a KHL All-Star Weekend, which will include the popular Master Show and the main event, the KHL All-Star Game.

In May of 2018, in Kazan, the KHL and the Republic of Tatarstan will sign the agreement on staging the 2019 Week of Hockey Stars.

- Tatarstan is a real hockey heartland, and we'd like to give special thanks to the President of the Republic, Rustam Minnikhanov, who plays hockey himself. It is the number one sport in Tatarstan, so the quality of organization for the Week of Hockey Stars will be raised to a new height.

An All-Star Weekend, with first the Master Show and then the four-team tournament that makes up the all-Star Game, is a winning format. Thanks to all the fans the 2018 event in Astana enjoyed superb ratings and audience share, and all this suggests we are providing a quality product.

The League will direct the income received from bookmakers to the co-financing of tournaments involving the participation of children's teams from KHL clubs, and also for the purchase of sports equipment for children's and junior hockey schools at KHL clubs, in addition to providing material incentives for children's coaches. The total amount of financial support in 2018 will be approximately 12 million rubles.

The League will consider the remaining funds received from bookmakers as one of the sources for distribution of additional commercial income to the member clubs, within the framework of implementing the KHL Strategy.

#official #Board of Directors