Sibir's exploits and SKA's exits – 10 shock results from the playoffs

Springtime, if not quite here, is certainly already on the arrivals board, and for hockey fans it means the season of the playoffs. The knockout stage, of course, is designed to determine which team is the best of the best, but in this part of our series of trips down KHL Memory Lane, we focus on the outsiders who became dark horses – not those who meekly followed the script and went straight on vacation, nor even those who went down fighting in a blaze of glory, but those unfancied heroes who, over the past decade, have defied the experts and produced sensational wins over their illustrious opponents. 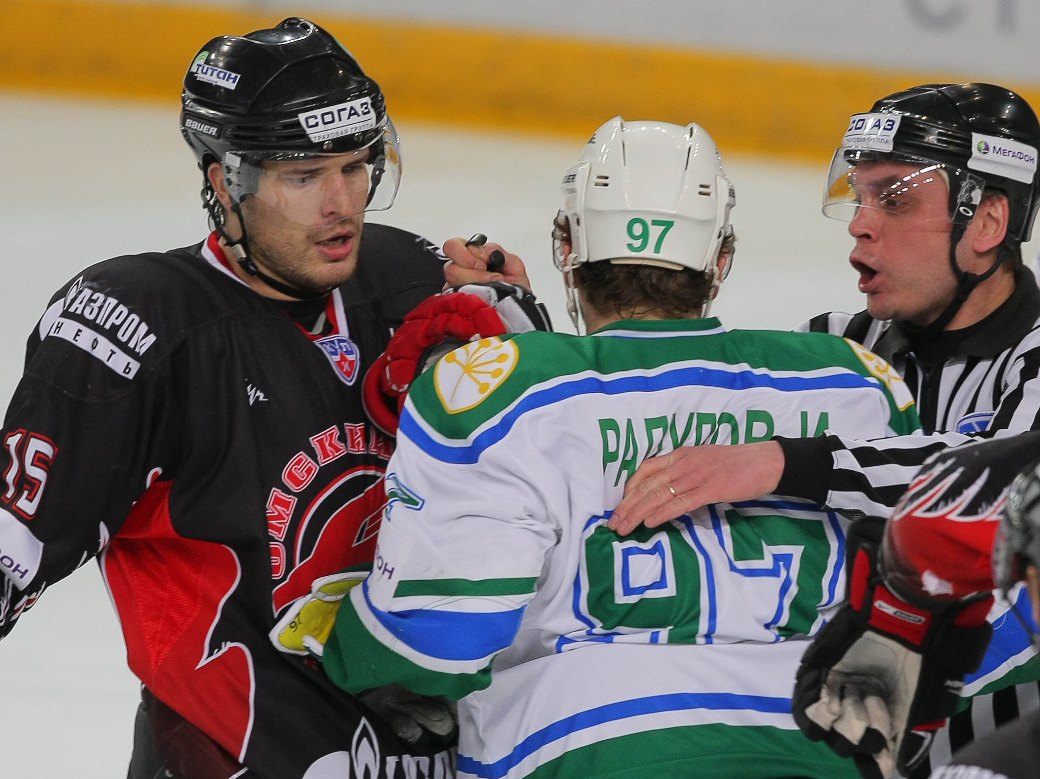 The first season of the League now seems like a part of prehistory, and it is easy to forget how different everything was during the fresh new tournament's maiden voyage. In the spring of 2009, there were no Conferences, and Avangard squeezed into 16th place in the regular season standings, qualifying for the knockout stage by a single-point margin ahead of Severstal. The great Jagomir Jagr was scoring goals and packing stadiums, but when it came to predicting the first KHL champion, most experts' thoughts turned to Salavat Yulaev, who had stormed to victory in the regular season and thus earned the right to start the playoffs against the outsiders from Omsk.

All went according to plan in the opening encounter, with the Ufa Men securing a confidence-boosting win, but from then on they struggled to cope with the Hawks, and particularly Jakub Klepis. The Czech tied the series with the crucial shootout goal in Game 2 and struck the overtime winner in Game 3. With the score in the series now reading 2-1 to the usurper, Avangard welcomed Salavat Yulaev to the Arena Omsk for Game 4 and completed an unlikely series victory. The Ufa Men were left to lick their wounds, and they decided to treat Klepis's stunning performances as an audition – the Czech was hired, and two seasons later won the Gagarin Cup with Salavat Yulaev. 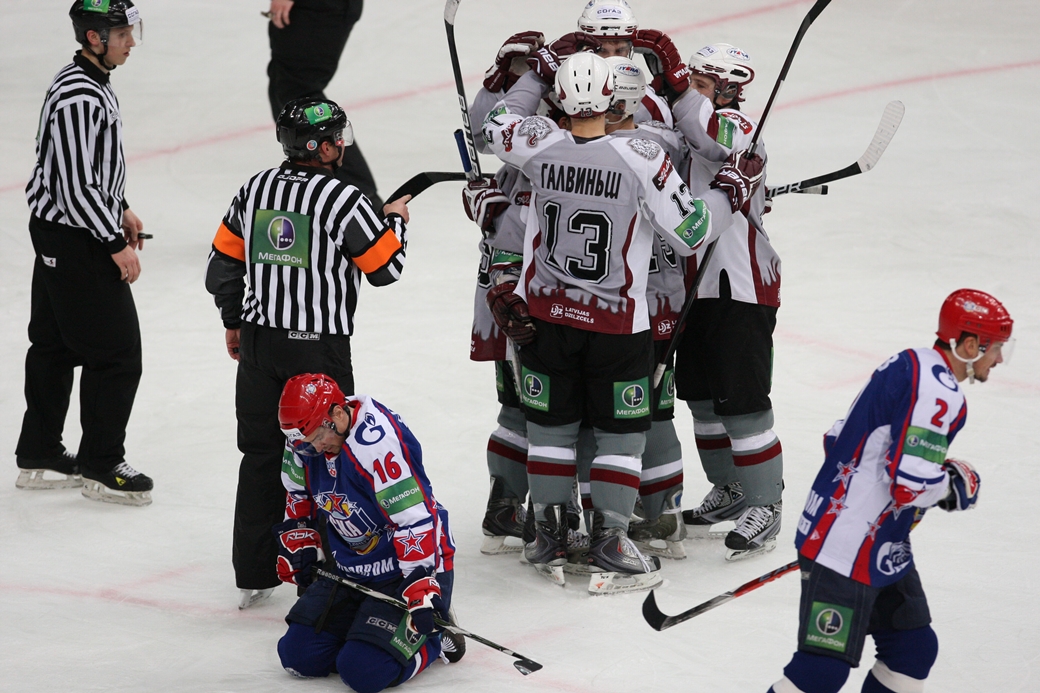 By the time the second season of the League entered its second stage, the club from Saint Petersburg had already acquired a mighty sponsor, and games at the Jubilee stadium before low attendances were a thing of the past. SKA had made themselves at home in their state-of-the-art Ice Palace, had won the Western Conference in entertaining and confident fashion, and poor performances were so rare they could be counted on the fingers of two hands. One of the team's losses had, indeed, been at the hands of Dinamo Riga, but few in the Northern Capital were pessimistic enough to see this as a foretaste of things to come. 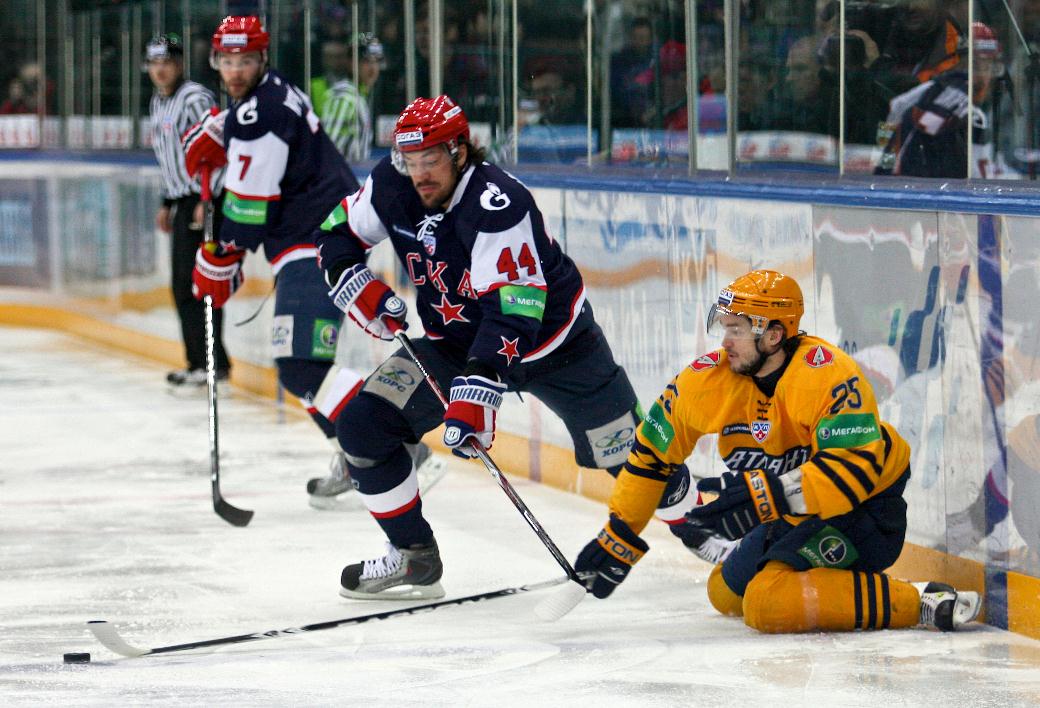 Into the third season of the KHL, and the first in which four victories were needed to win a playoff series. Reason dictates that the longer the series, the lower the chances of a David-versus-Goliath result, so maybe extra credit should go to the minnows who manage to devour the big fish on four occasions. If the odds against a favorite making an early exit had now lengthened, then the chances of SKA once again being the victim would seem astronomical. The Petersburg Men were stung by Riga's triumph the previous season, and so had replaced the coach and brought in reinforcements from the NHL in the shape of Evgeny Nabokov and Maxim Afinogenov. And while the regular season was a bumpier ride than many had predicted, the Army Men secured a third-placed seeding and confidently raced to a 4-0 sweep against Spartak in the Conference quarter-final.

Then came the semi-final against Atlant, and SKA duly wrapped up Game 1. A loss against the Moscow Region minnows in the second encounter seemed more of a blip than a stumble, and indeed, two more victories had the Petersburg Men apparently coasting at 3-1. No team coached by Milos Riha is going to give in without a fight, of course, and with nothing to lose and with goalie Konstantin Barulin in inspired form, Atlant kept the series alive at 2-3. Then it was 3-3, by which time the alarm bells were certainly ringing. A tense Game 7 went to overtime, and a goal from Dmitry Bykov sealed a sensational fight-back. 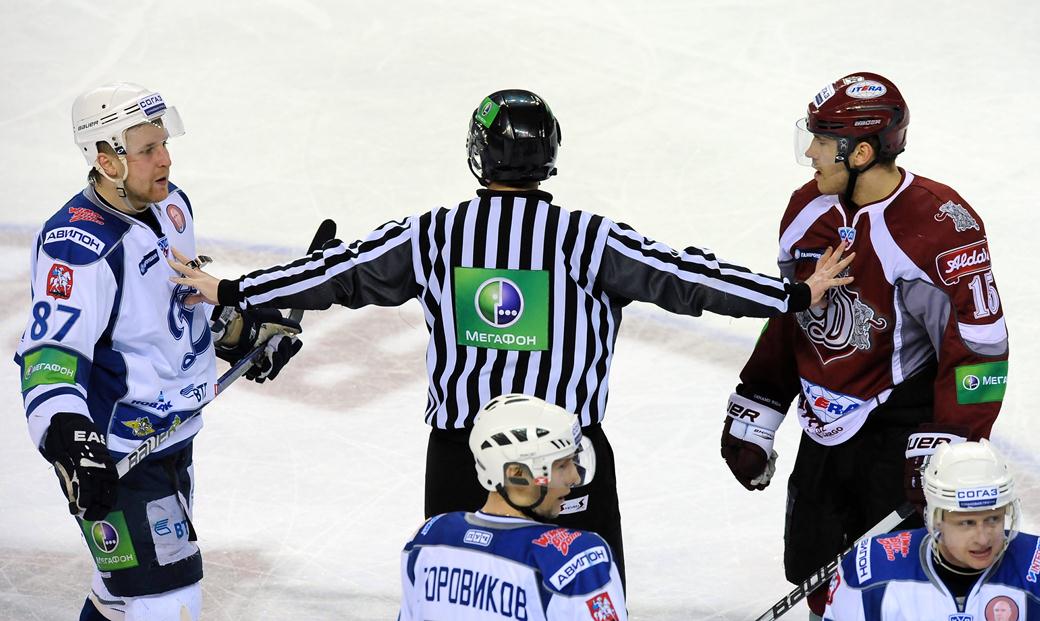 By the spring of 2010, the famous “old” Dynamo had ceased to exist, and the new entity had merged with HC MVD, with the result that the Blue-and-Whites now welcomed an influx of many fine players as well as the addition of Oleg Znarok, whose status had risen from that of a little-known specialist to one of the most formidable young coaches in the nation (confirmed, if needed, by his recent exploits as Team Russia boss in the Olympics). He had the tricky task of merging the two squads of players into a coherent unit on the ice, but he achieved this with ease and his team galloped to a second-place finish in the Western Conference. Given Znarok's success with HC MVD while working with very limited resources, many expected the Muscovites to at least reach the big final.

And then came the men from the Latvian capital. If in the previous season, it could be said that mighty SKA suffered at the hands (and gloves, pads, stick...) of Edgars Masalskis, then this year's shock was administered with ruthless efficiency by a pair of rotating goalies, Mikael Tellqvist and Chris Holt, while at the sharp end the Riga Men boasted Lauris Darzins, Martins Karsums and Mikelis Redlihs. All three were to don the colors of Russian clubs, but that was still in the future. In the third season of the KHL, the trio were an all-Latvian force of destruction. The deciding game, oddly enough, was Game 1 in the Russian capital, as it was the only match in the series in which the visiting team claimed the spoils. 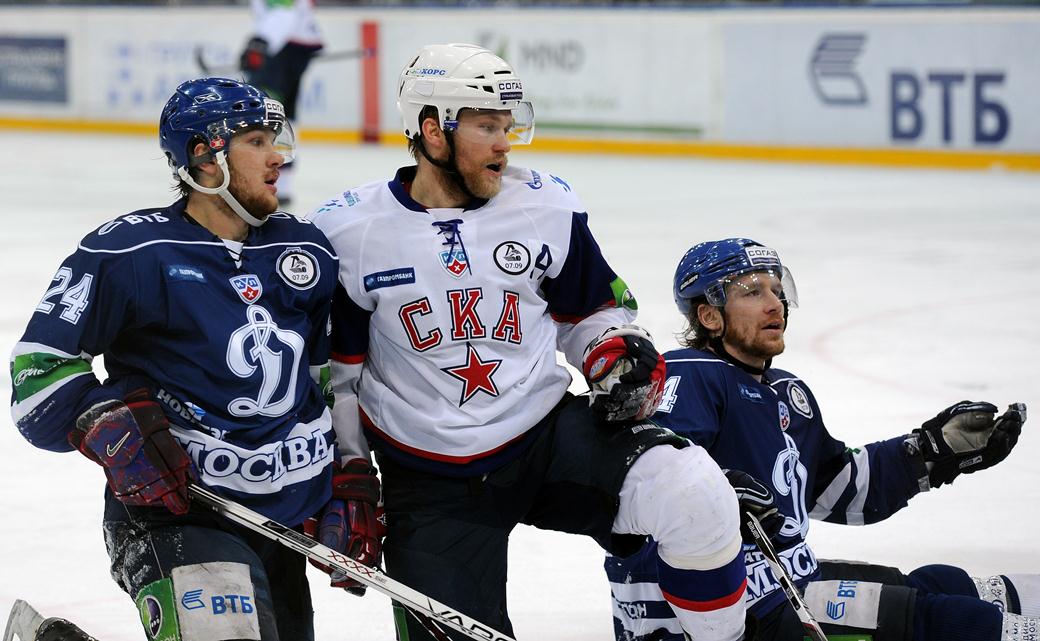 And once again, SKA makes a return to our chronicle of top dogs losing to underdogs. Let no-one say that the club's journey to eventual glory was a painless one. Fate had decided that for two years running, SKA would reach the Conference final only to find the route blocked by a team under the guidance of Oleg Znarok, the man who would eventually lead the Petersburg Men to a second Gagarin Cup triumph. In charge of SKA was Milos Riha, invited to take command after he had masterminded the Army Men's downfall at the hands of Atlant the previous season

Riha had led the team to a first-place finish in the regular season, with Dynamo lurking ominously behind them, and the rivals had exchanged two wins each. Understandably, almost everyone expected a tight and tense series, but only the opening game turned out to be evenly contested. Thanks in part to a hat-trick by Denis Mosalyov, Dynamo battled back from 2-4 to claim a thrilling win in overtime. To add insult to injury, that overtime period also featured a goal by Tony Martensson, controversially struck out by the referee. The decision enraged Riha and seemed to take the wind out of Petersburg's sails. SKA failed to offer stiff resistance in any of the next three games, and the final encounter was particularly painful – the Muscovites inflicted a 6-1 thrashing and sent the Army Men on their summer vacations. 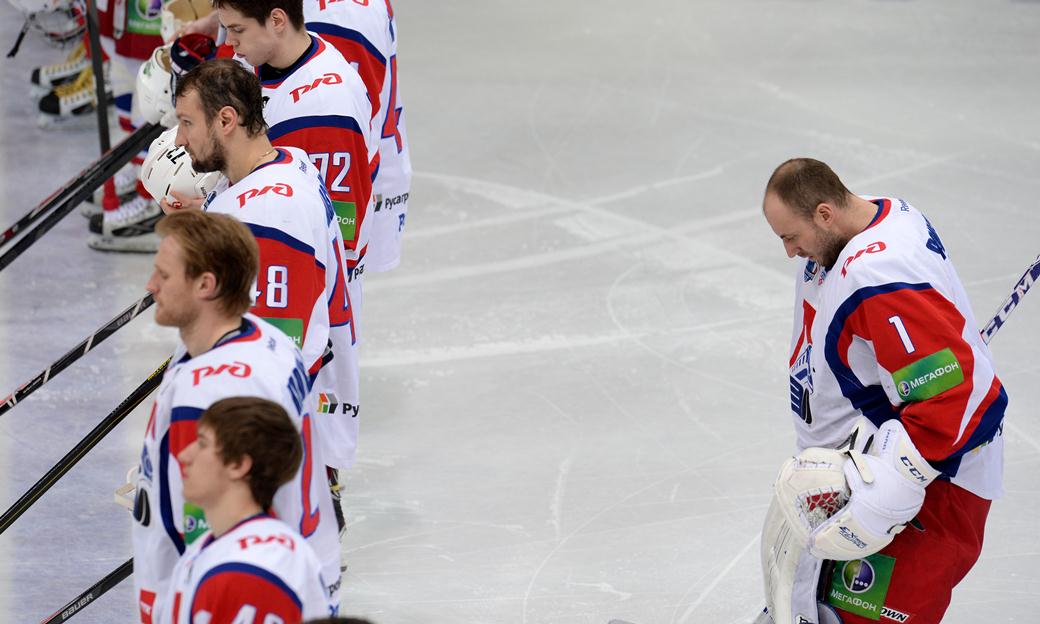 Looking at this match-up today, and considering the current fortunes of the two protagonists, it takes a moment to realize the full extent of the shock generated by this result. Lokomotiv is now halfway toward clinching a place in the Conference semi-final, while Dynamo's season has already reached its end. Four years ago, however, the Railwaymen were still finding their feet after the tragedy of the 7th of September, 2011, while the Muscovites were reigning champions, setting their sights on a third successive Gagarin Cup. Moreover, the latter were still led by Oleg Znarok, while the Yaroslavl team had put in so many toothless performances that the club had parted company with coaching legend Pyotr Vorobyov before the Olympic pause, and installed Dave King in his place.

The Canadian, who famously wrote a book about Russian hockey, had just enough time to get Lokomotiv back on the rails, finishing the regular season with four straight wins, but this still only secured them eighth spot in the Conference. On paper, then, a Dynamo sweep looked highly likely, but on the ice things turned out very differently. The fans were treated to a seven-game series which resulted in the most sensational result of the season. Three of the matches went to overtime, but Lokomotiv wrapped it up with convincing victories in the sixth and seventh games by an aggregate score of 11-1. After this early exit, Znarok took charge of the Russian national team, and he called up two of the heroes of this series, Sergei Plotnikov and Yegor Yakovlev, in recognition of their performances. 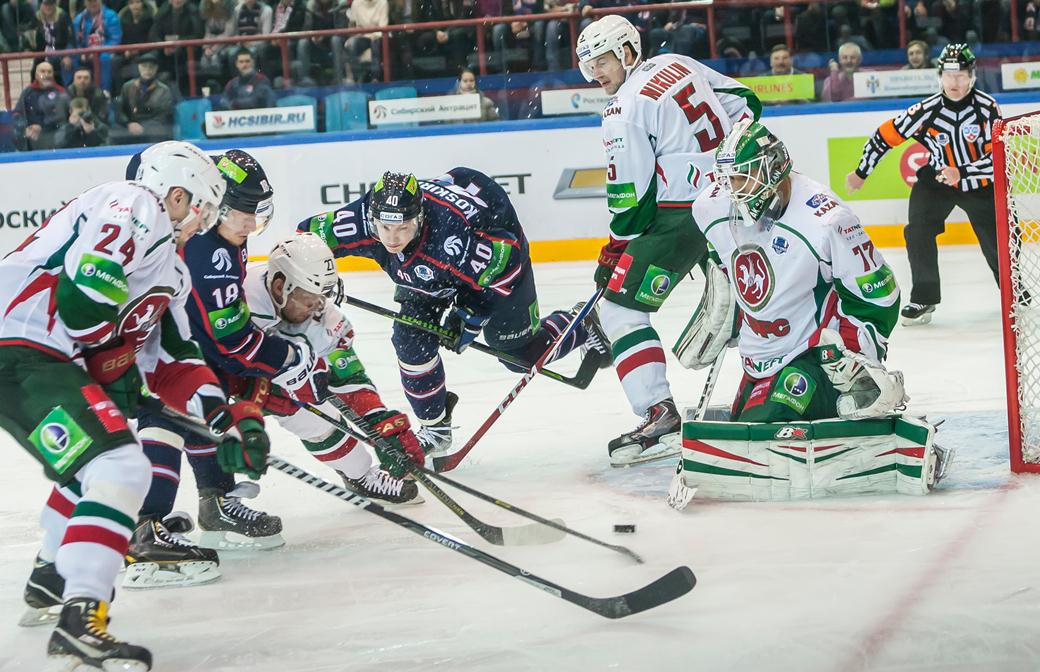 The first signs of greatness in this Sibir team appeared during the previous season, when the Novosibirsk Men, who for so long had been just an unruly bit-part player in the Eastern Conference, managed to take Avangard to seven games in their playoff series. Dmitry Kvartalnov's boys had shown their teeth. Memories of this were still fresh when they were preparing to do battle with the mighty club from Kazan, and they were in no hurry to throw in the towel.

Sibir wasted no time in showing their intent, defeating the White Leopards in their Kazan lair in the first match in the series. That win was earned with restrained and tactically astute hockey, but the fans in Novosibirsk were treated to swashbuckling, high-scoring and thrilling play. Ilya Nikulin whipped the packed stands into a frenzy, seven times the puck struck the back of the Ak Bars net, and the Kazan men hit back in the next game with six goals of their own. The outcome was decided in Game 6 of the series, when Sibir fought back valiantly from 0-2 down and finally clinched a well-deserved victory in a tense second overtime. The crucial goal came from local lad Stepan Sannikov, who would later merit the captaincy at Novosibirsk. 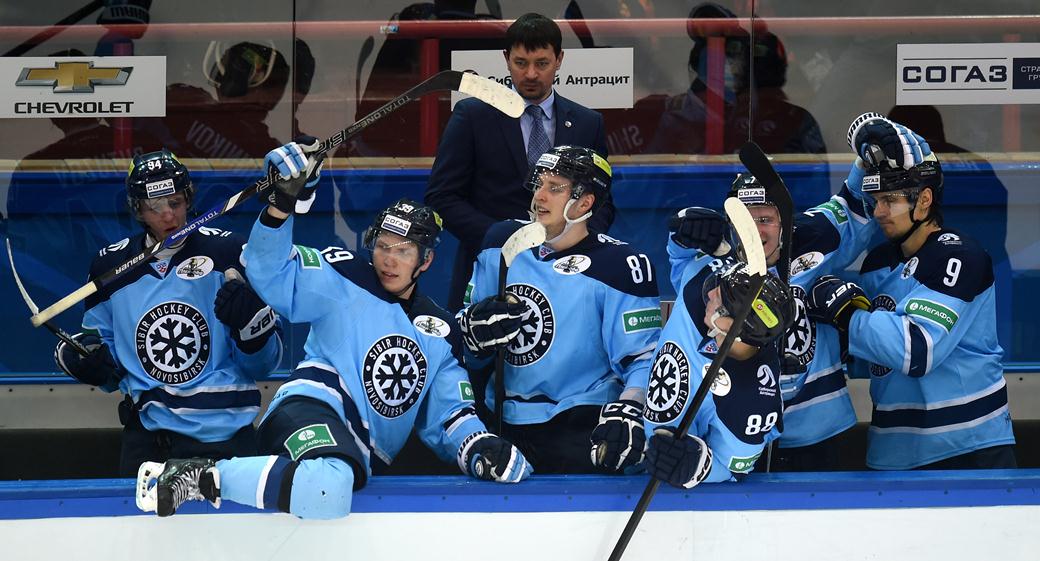 When the campaign began, there were few, if any signs that the Novosibirsk Men would enjoy anything more dramatic than a routine season of consolidation. Boss Dmitry Kvartalnov had departed for the Russian capital in search of new challenges, and the team was led by a then-unknown specialist from Belarus. During the first months of Andrei Skabelka's time in charge of Sibir, his charges did little to attract attention, and even had to battle to secure a spot in the post-season. However, when the regular season reached the finish line, the team was ahead of mighty Magnitogorsk, but only by dint of the Divisional ranking, as the Steel City men still had more points.

Everyone knew all about Magnitka's fearsome offensive troika - Sergei Mozyakin, Danis Zaripov and Jan Kovar - yet nobody had found a way of blunting that cutting edge, but an effective shield against the Metalworkers was devised by the Alchemist from Belarus. The Siberians went for the supply line, defending high up the ice. The tactic is easier said than done, and demands solid concentration and superhuman effort, but it worked, and Mozyakin and his partners were left feeding off scraps in powerplay. Sibir emerged triumphant and won the first medals in the club's history, while for “Magnitka,” it was time to rebuild.