Magnitka one step away from the grand final

Alexander Semin and Sergei Mozyakin were the architects of a victory that puts Metallurg on the brink of its second Gagarin Cup final in three seasons.

Semin’s game-winner, snapping a 1-1 tie with 12 minutes left to play, gave Magnitka a 3-1 series lead and means Ilya Vorobyov’s team could wrap it up Thursday on home ice with a repeat of the 4-1 margin it enjoyed over the same opposition on its way to glory in 2014. However, Salavat Yulaev proved in the previous two rounds that it has the stomach for a battle: Igor Zakharkin’s team saw off both Ak Bars and then Avangard in seven games.

Semin, who arrived at Metallurg in mid-season after being waived by Montreal Canadiens in December, has added a new dimension to his team’s offense in the playoffs. His seventh post-season goal was typical of what he does best. Collecting a pass from Chris Lee he paused at the top of the circle, picking his moment to unleash a slap shot just as Wojtek Wolski skated across the front of Niklas Svedberg. Unsighted, the Swedish goalie had no time to react as the puck whistled over his glove and into the net.

If Semin is the new weapon in Magnitka’s arsenal, the tried and trusty firepower of Mozyakin remains as potent as ever. He claimed his 18th point of this year’s playoffs with an impressive assist on the opening goal. Mozyakin spun away from Anton Lazarev and opened up a huge amount of space around the left-hand circle. He drove for the net, looking to score on the wraparound, only to be denied by Filip Metlyuk’s skate as the defenseman got back to cover. Metlyuk was out of luck, though; the puck dropped on to the stick of Viktor Antipin, who fired into the empty net to give Magnitka a sixth-minute lead. 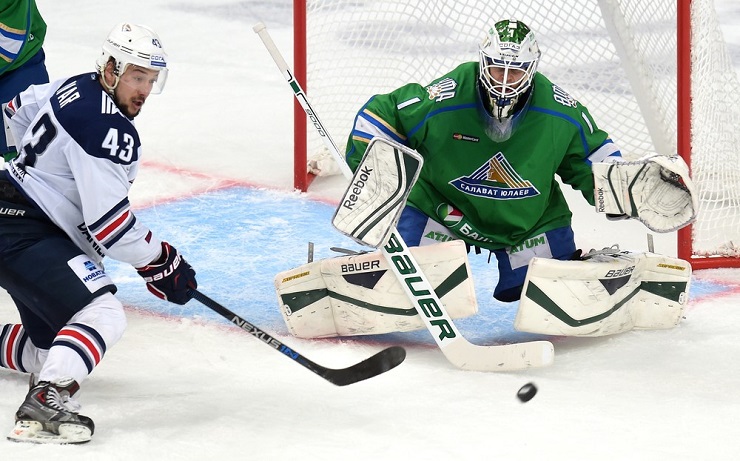 The first period’s other big flashpoint came midway through when Wojtek Wolski chased down a Tomas Filippi shot and ended up with his stick in Niklas Svedberg’s face. Alexander Loginov reacted angrily and both players traded blows before being handed major penalties. That fight proved inconclusive, but Wolski undoubtedly had the last laugh when Loginov’s defensive disaster rubber-stamped Metallurg’s win in the final minute. The Salavat defenseman carelessly pushed the puck behind the empty net, anticipating a team mate would come and collect it. There was no such team-mate; Wolski nipped in to steal the puck and knock it into the net for a simple goal.

That wrapped up a win despite Salavat tying the game early in the third. Just 17 seconds after the restart Igor Grigorenko, who had already gone close in the first period, got the goal. He broke into the Metallurg zone, exchanged passes with Sergei Soin and fired home from the bottom of the circle as Linus Omark made a nuisance of himself in the slot.

But Magnitka stood firm and frustrated the home team’s offense before converting its chances to claim the victory.