Injuries and suspensions dominated the build-up to the game, with the visitor particularly hard hit by the absence of forwards Andreas Engqvist and Igor Grigorenko, as well as an injury to D-man Denis Bodrov. Magnitka, meanwhile replaced suspended forward Rafael Batyrshin with Denis Osipov … and the stand-in blue liner delivered his team’s opening goal midway through the first period.

It all started with Vladislav Kaletnik bursting through on goal only to be fouled. On a delayed penalty Magnitka got traffic in front of Niklas Svedberg and fed the puck to Osipov on the blue for a powerful shot that gave the unsighted goalie no chance.

However, there was little in the game to suggest how dramatically Salavat Yulaev would unravel in the middle stanza. Potekhin started the scoring in the 23rd minute, cashing in as the visitor made an error while changing lines and coughed up the puck to present Magnitka with a four-on-two break.

Then another defensive lapse saw Metallurg steal the puck in the Salavat end. Danis Zaripov fed Mozyakin and the captain tricked his way past Zakhar Arzamastsev before finding the top shelf. A minute later it was 4-0. Magnitka on the power play, Wojtek Wolski with the pass and Alexander Semin left all alone at the far post to snaffle his sixth goal of the playoffs. Salavat was ahead on the shot count, but trailing horribly on the scoreboard.

That saw Svedberg replaced with Vladimir Sokhatsky as tempers were raised on the ice. The second period siren brought a bout of pushing and shoving that resulted in four players, two from each team, receiving 2+2 minute roughing penalties. 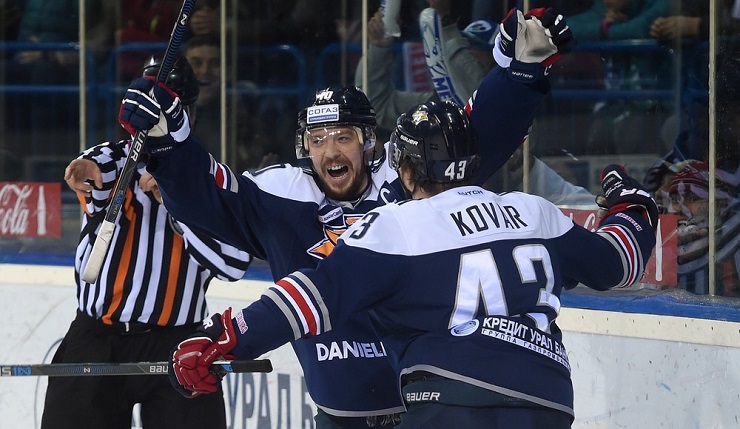 The final stanza was something of a phoney war for 10 minutes before two quick Magnitka strikes reawakened the game. Semin created the first with his second assist of the night; his beautifully weighted pass across the face of goal left earned a metaphorical doffing of cap from Tomas Filippi as he slotted home goal number five. Moments later Salavat’s misery was all but complete as the home team added a shorthanded goal to add insult to injury. Yaroslavl Kosov saw the chance of a breakaway following a face-off and went clean through to score on Sokhatsky.

Salavat managed a consolation strike when Sami Lepisto shot from behind the net and fired the puck in off Vasily Koshechkin’s skate, but the team must now look to regroup after a heavy defeat. Igor Zakharkin’s men has done this before – remember how the team bounced back from a 0-8 drubbing in Kazan? – but this time the stakes are higher still.