Avangard denied Salavat Yulaev victory in this series thanks to a confident display in Omsk. The home faced elimination after back-to-back losses in Ufa but kept its hopes alive after withstanding a fight back in the last 10 minutes to clinch a 3-2 win on the night.

To add insult to injury for Salavat Yulaev, the opening goal came from a player who began the season in Ufa. Ivan Lekomtsev made it 1-0 in the eighth minute, pocketing Avangard’s first power play goal of this series with a one-timer from the left-hand face-off spot off a pass from Ilya Zubov.

Avangard’s second goal, in the 36th minute, brought some controversy. There was no argument about Zubov’s finish, sweeping the puck home from close range after Alexander Chernikov’s scintillating rush ended with a shot into Niklas Svedberg’s pads. But there were questions about whether Chernikov or his team-mate Nikolai Lemtyugov had deliberately encroached into the crease as the shot came in. The replays suggested that Lemtyugov had been inadvertently pushed into the paint and the goal was given.

Lemtyugov’s next big contribution was beyond question, however. Salavat ran into penalty trouble and survived two minutes of 3-on-5 play, only to concede seconds after the return of the fourth skater. Lemtyugov got the goal, firing home a one-timer from the slot off Martin Erat’s pass. 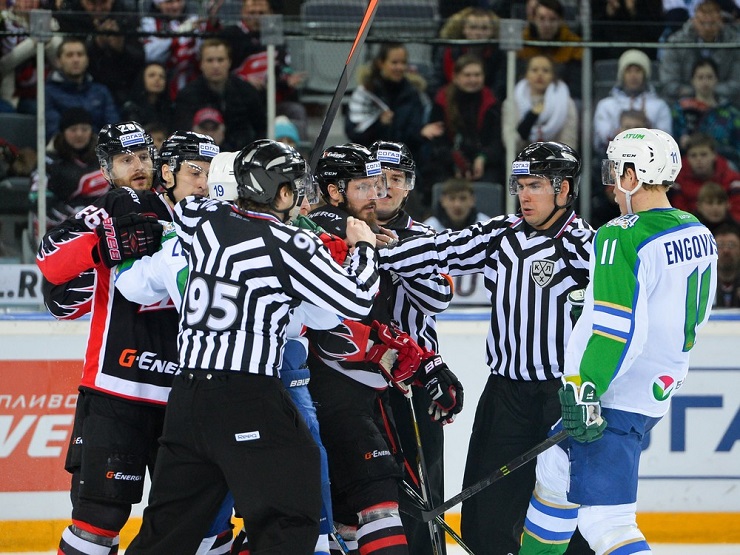 Salavat Yulaev generated a flicker of hope in the last 10 minutes after Anton Burdasov was handed a 5+20 for a hit to the head of Anton Lazarev. Ivan Vishnevsky’s shot from the blue line reduced the deficit and when Sergei Gusev took a hooking call the home team faced a long spell with a two-man disadvantage. But the PK held firm and despite Igor Grigorenko making it a one-goal game on 55:57 when he deflected Maxim Goncharov’s slap shot into the net.

The action now returns to Ufa on Friday, with Salavat Yulaev looking to wrap up the series at the second attempt, this time with home ice advantage.