Salavat Yulaev closes in on victory

Linus Omark continues to lead from the front for Salavat Yulaev in this year’s playoffs – and his late strike secured a come-from-behind victory and grab a 3-1 lead to take to Omsk on Wednesday.

Omark joins SKA’s Vadim Shipachyov on 12 post-season points and shares the overall scoring lead after potting his fifth goal of the campaign to give Salavat Yulaev a commanding cushion against the Eastern Conference champion.

This time he needed quick hands to control a puck that squirmed awkwardly towards him at the far post after Andreas Engqvist’s shot was pushed onto the piping by Dominik Furch’s outstretched pad. That gave Salavat the lead with just over three minutes to play and despite a late Avangard surge, the men in green held on for the victory.

Avangard, needing a win to tie the series, made a bright start and took the lead after eight minutes through Pyotr Khokhryakov. Anton Burdasov created the opportunity, advancing down the right and slipping the puck across the face of the net into the path of Khokhryakov for a straightforward finish into an open goal.

That sparked the home team into life. Andreas Engqvist had the puck in the net but his effort was ruled out for kicking as Salavat steadily increased the pressure on Dominik Furch in the Avangard goal. 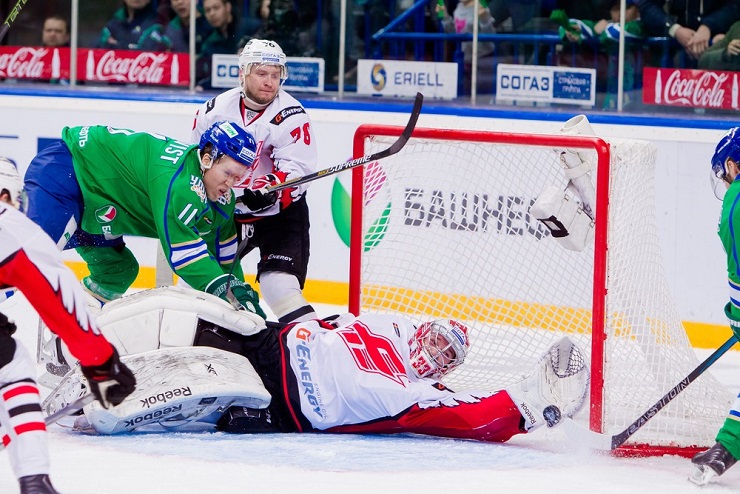 Sami Lepisto tied the scores late in the second period after Dmitry Makarov’s swooped behind the net and popped the puck out into the slot for the Finnish defenseman to force it home from close range. The home team’s dominance was so great that Avangard managed just one shot on Niklas Svedberg in the middle session.