After two close encounters between these teams in Omsk left the series tied, Salavat Yulaev forged ahead on home ice in a game that got back to basics and saw both defenses step up a level from their haphazard efforts in Thursday’s 5-4 win for Avangard.

But satisfaction at the victory was tempered by the sight of defenseman Denis Bodrov being stretchered off the ice early in the third period. Bodrov, who has two points in this season’s playoffs, crumpled under a challenge from Avangard forward Maxim Kazakov and was clearly in pain as he was taken out of the game with what looked like a knee problem.

Ivan Vishnevsky opened the scoring thanks to unselfish play from Linus Omark. Salavat’s leading post-season scorer robbed Yury Alexandrov in center ice and was through on Dominik Furch’s net. Alexandrov got back to harry him out of a shooting position but an instinctive drop pass spun the puck back onto Ivan Vishnevsky’s stick and the defenseman’s one-timer left the Czech goalie with no chance.

The second goal, midway through the middle stanza, was a tribute to solid checking. Salavat’s players kept delivering the hits, pinning Avangard in its own zone. Eventually the pressure told as the puck came back from the boards and Teemu Hartikainen swivelled to unleash a back hand from the deep slot that gave Furch no chance.

The third period was just 90 seconds old when Bodrov was injured and that blow seemed to unsettle the home team. Avangard sensed hesitancy and hauled itself back into contention with a 46th-minute goal from Nikolai Lemtyugov. He collected Alexandrov’s pass with his back to goal but was able to swing around between the hatching and sweep a shot past Niklas Svedberg. 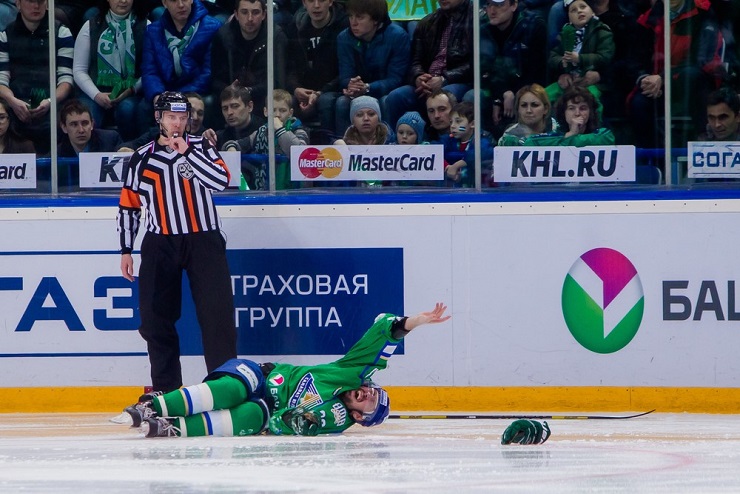 Once again it was a tense, close game between two teams that have been evenly matched throughout this series. But even though Avangard piled on the pressure, firing in 17 shots in the third period, there was no way back. Svedberg, so often criticized for the goals he gave up in recent games, stood firm and when a bench penalty neutralized the visitor’s final storm it was Sami Lepisto’s empty-netter that wrapped up the scoring.

Salavat has the chance to extend its lead in this series on home ice when the teams meet again on Monday.