Sergei Soin’s overtime winner gave Salavat Yulaev the early initiative against Avangard. Soin, a double Gagarin Cup champion with Dynamo Moscow, struck in the 73rd minute to snap a 2-2 tie and leave the home team ruing its failure to hold on to its lead in regulation.

It was a disappointing goal for the home team to give up: there was little danger as the Avangard defense held the puck deep in its own zone, but an inexplicable mix-up between Michal Kempny and Ilya Zubov gifted the puck to Soin and the forward reacted smartly to beat Dominik Furch and hand his team victory in a game where it never held the leads.

Earlier, Avangard made the perfect start with a goal inside two minutes from Nikolai Lemtyugov. Not for the first time in this post-season, Salavat goalie Niklas Svedberg was left scratching his head after the puck somehow smuggled its way through his defenses from an impossibly tight angle as Lemtyugov looked to find a colleague on the slot.

But the visitor tied it up in the 16th minute when Maxim Mayorov found plenty of time in front of the net after Avangard’s defensemen were lured beyond the red line in search of the puck. When the disk emerged, Mayorov had a golden opportunity to fire past Furch and level the scores.

The middle stanza was scoreless and chances were limited but in the 41st minute Avangard went ahead once again. Kempny fired in a shot from the point and Denis Parshin stretched out his stick to lift the puck into the roof of Svedberg’s net. 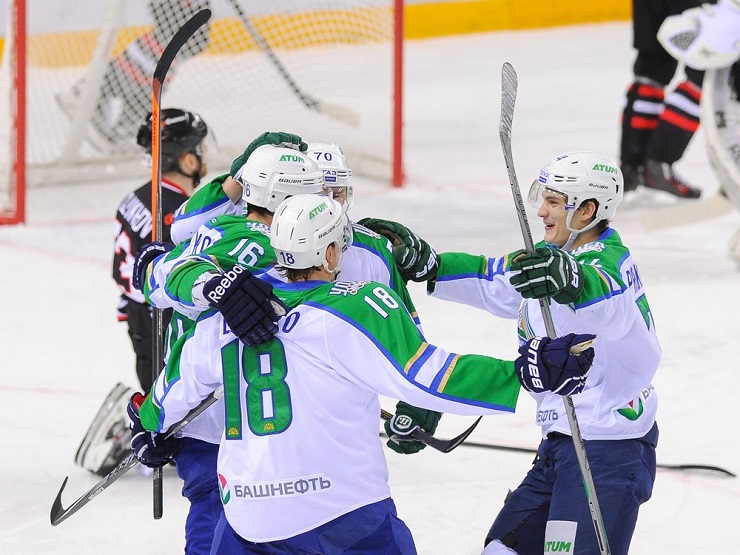 Salavat Yulaev wasn’t done, though. Linus Omark, the team’s top scorer in the first round, found the equalizer with eight minutes to play. The Swede wriggled his way in between defenceman and goalie to reach a shot from Dmitry Vishnevsky and sweep it home on the backhand.

Avangard had the better of the play in overtime, with Svedberg making nine saves to keep his team in contention – but that decisive blunder saw Salavat Yulaev take the early lead in the series.