A brighter shade of green

The ‘green derby’ went the distance and the outcome of this heavyweight clash remained in doubt until the siren sounded – but Salavat Yulaev held its nerve to win through to an Eastern Conference semi-final against Avangard.

The Ufa team recovered from a chastening 0-8 reverse on Thursday to shrug off the setback of conceding a goal in the first minute and claw its way to a narrow 3-2 verdict against its most bitter rival.

Dmitry Makarov’s first goal of the playoffs ultimately proved the difference between two teams that produced seven games of compelling, unpredictable hockey. He struck in the 39th minute to haul Salavat Yulaev into the next round.

The game got off to a pulsating start as the teams traded goals in the first 65 seconds. Ak Bars took the lead with the first attack of the game as Dmitry Arkhipov went coast-to-coast before startling Niklas Svedberg with a shot from the boards. But Salavat tied it up within seconds after some lax defense gave Makarov a shooting chance. The attempt got caught up in the skates of an Ak Bars D-man and fell perfectly for Enver Lisin to fire home the equalizer.

Lisin then played a big role in Maxim Goncharov’s go-ahead goal in the 16th minute. He emerged with the puck from behind the net and fed the defenseman at the top of the circle. Goncharov needed no second invitation, unleashing a mighty one-timer that gave Emil Garipov no chance.
Makarov then weighed in with his all-important goal. Swivelling away from a defenseman and getting a shot off even as he fell to the ice, he beat Garipov from the slot to open up a two-goal cushion going into the final stanza. 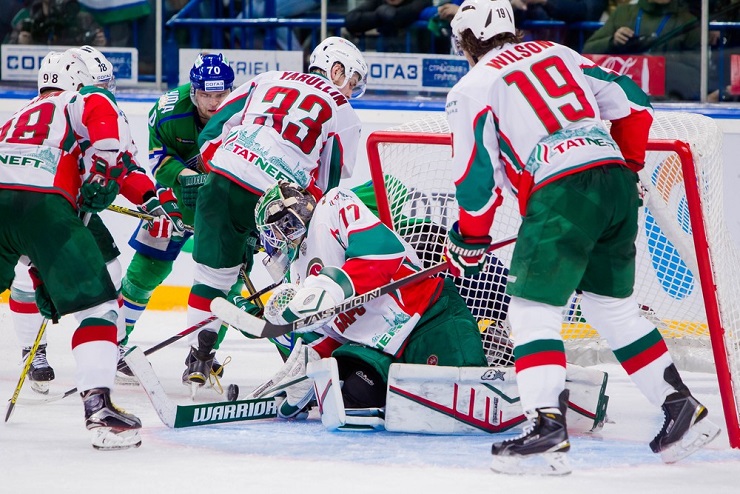 Now all the attention was on the Salavat defense. After giving up eight goals on Thursday, could it hold out here and secure a place in the next round with a minimum of fuss? The early signs were not promising – Denis Khlystov took a penalty early in the third and Ak Bars seized the initiative. Mikhail Varnakov went agonizingly close but found the angle too tight as the net gaped before him and it seemed that the home team might be in for a long third period.

Instead, it kept Ak Bars at bay until the dying moments when a simple, direct play gave Ak Bars the lifeline it craved with just over two minutes to play. Stepan Zakharchuk, deep in his own zone, played a long pass to Fyodor Malykhin as the forward waiting on the Salavat blue line. Malykhin’s pass inside set up Dmitry Obukhov for a one-timer that ripped past Svedberg to make it one-goal game and ensure a nerve-jangling finale. Linus Omark was denied a goal that would have settled it for Salavat before Garipov made way as Ak Bars unleashed its final storm. But the hooter came too soon; last season’s beaten finalist bows out at the first hurdle in 2016.
#east #akbars #salavat