Much of the pre-game talk was about the coaching duel between Zakharkin and Bilyaletdinov, but the opening game in this eagerly-awaited series was settled by Igor Grigorenko.

The forward, back at Salavat Yulaev this season after a spell with CSKA Moscow, has fond memories of helping the Ufa team lift the Gagarin Cup in 2011. And his two goals in this game got his team’s post-season campaign off to the perfect start as these old playoff foes clash once again.

His opening goal was a cracker: Linus Omark’s quick turn and pass out from behind the goal found Grigorenko standing astride the red line. In a split second the forward sized up the situation, spotted the gap and pinged a wrister into the top corner off the shoulder of goalie Stanislav Galimov.

The second, deep in the middle period, involved the same combination. Andreas Engqvist found Omark behind the net, the Swede picked out Grigorenko in front of the target and this time a one-timer from the slot left Galimov with no chance.

Ak Bars, having been comprehensively outplayed in the early stages, raised its game in the third in a bid to force a way back into the encounter. But Salavat held firm with goalie Niklas Svedberg making 12 saves in the final stanza before a frantic final minute saw empty net goals from Teemu Hartikainen and Denis Khlystov put Salavat on course for a big win and Dmitry Obukhov snatched a last-gasp consolation for the visitor. 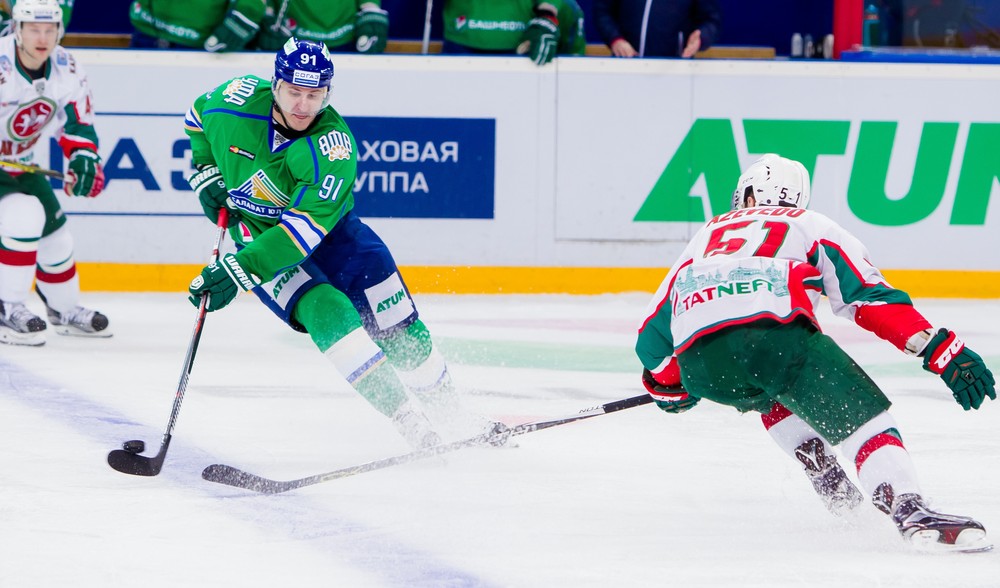