Kazan was the center of attention last week as the Oleg Znarok revolution sees two legends join Ak Bars. Elsewhere, Moscow’s clubs get ready to welcome more imports, Avangard returns to Omsk and the schedule for 2022-2023 is ready.

The KHL unveils its full schedule for the 2022-2023 regular season on Monday (1200 Moscow time). It promises to be record-breaking campaign, with each team set for 68 games between Sep. 1 and Feb. 26. It all starts with the Opening Cup in Moscow, when CSKA faces Metallurg in a repeat of last season’s Gagarin Cup final. Gameday two sees Avtomobilist vs Lokomotiv, Kunlun Red Star vs Admiral, Traktor vs Severstal, HC Sochi vs Sibir and Spartak vs Amur.

2022-2023 KHL Schedule: record number of games and one international break 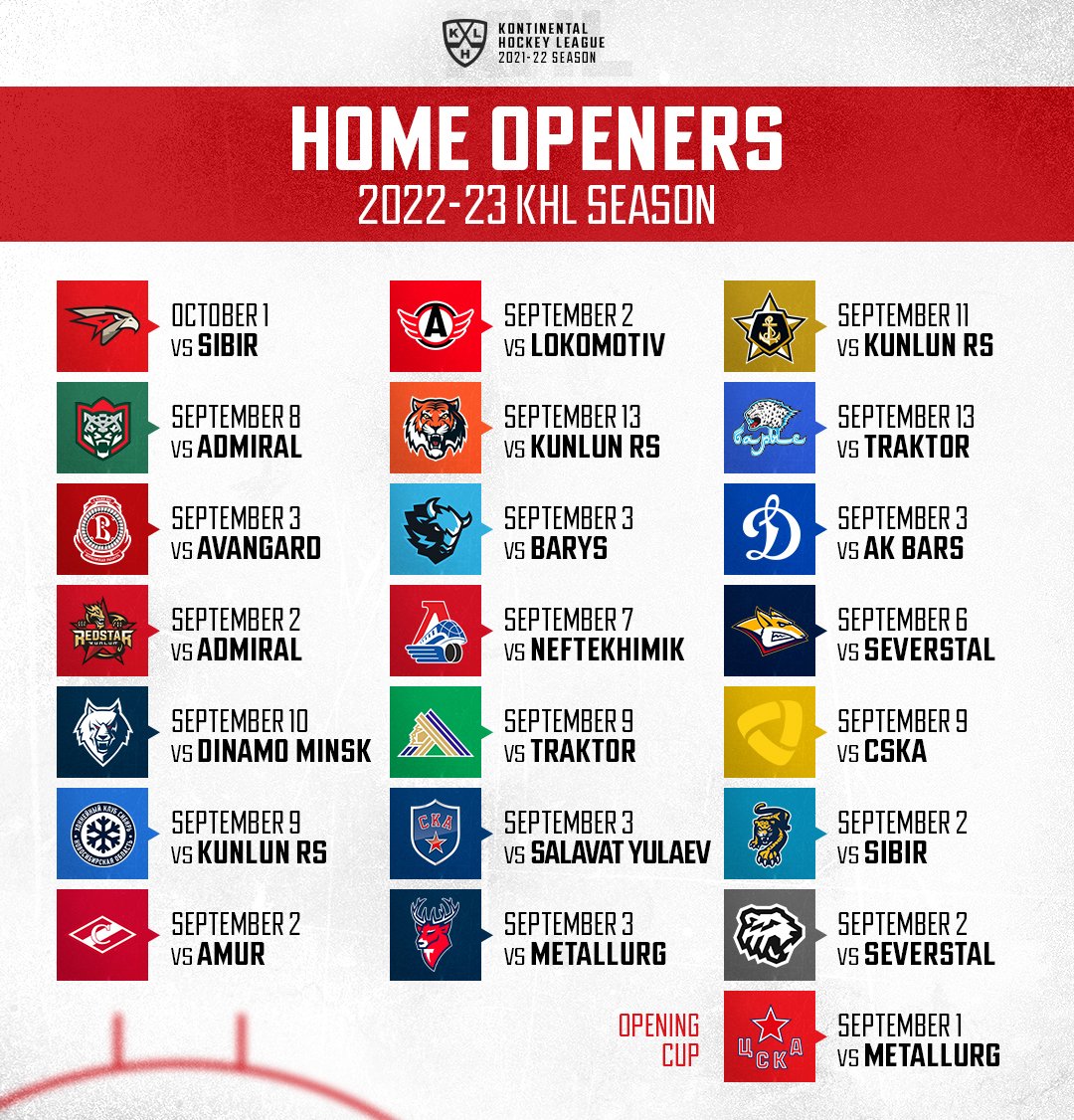 Another much discussed signing was confirmed last week when Ak Bars unveiled Alexander Radulov on a two-year deal. The 36-year-old’s game-winning qualities are beyond doubt: we’ve seen it on two World Champion roster for Team Russia and as the powerhouse behind Salavat Yulaev’s 2011 Gagarin Cup triumph. In eight previous KHL seasons, the fiery right-winger has 492 (169+323) points in 391 regular season games, plus 89 (24+65) points in 92 outings across seven playoff campaigns. He was the first player to reach 300 points in the league and is currently fourth on the all-time scoring list.

Radulov last played in the KHL with CSKA in 2015-2016, reaching another Gagarin Cup final but losing to Metallurg. Subsequently, he returned to the NHL for one season in Montreal and five with Dallas Stars, including three wearing the ‘A’.

That’s not all the news from Kazan. Two Ak Bars legends have confirmed their involvement at the club next season. Veteran forward Danis Zaripov shows no sign of hanging up his skates – the 41-year-old signed a one-year extension and is talking in terms of winning an unprecedented sixth Gagarin Cup in a glittering career. In addition, after hiring three-time Gagarin Cup winning coach Oleg Znarok, Ak Bars adds three-time Gagarin Cup winning coach Zinetula Bilyaletdinov as director of hockey operations. That’s some serious title-winning pedigree right there.

Kunlun Red Star, as usual, has kept its card close to its chest about the roster for the coming campaign. On Friday, though, the Chinese franchise confirmed its head coach would be Greg Ireland. The 56-year-old Canadian arrives after three years at HC Bolzano in the cross-border Austrian league. He also took charge of Team Italy for the past two seasons. Ireland’s coaching career also includes a long spell in the AHL, including a spell working closely with the legendary Mike Babcock, who coached the Red Wings while Ireland was behind the bench at the Grand Rapids Griffins. Ireland also worked in Switzerland and Germany, and includes current Swiss national team head coach Patrick Fischer, once of SKA, among his assistants.

In other KRS news, former Dragon Spencer Foo is celebrating a return to the NHL. The 28-year-old, who was on China’s Olympic roster last season, signed a one-year deal with Vegas Golden Knights. Previously, Foo had two goals in four games for Calgary in 2017-2018. 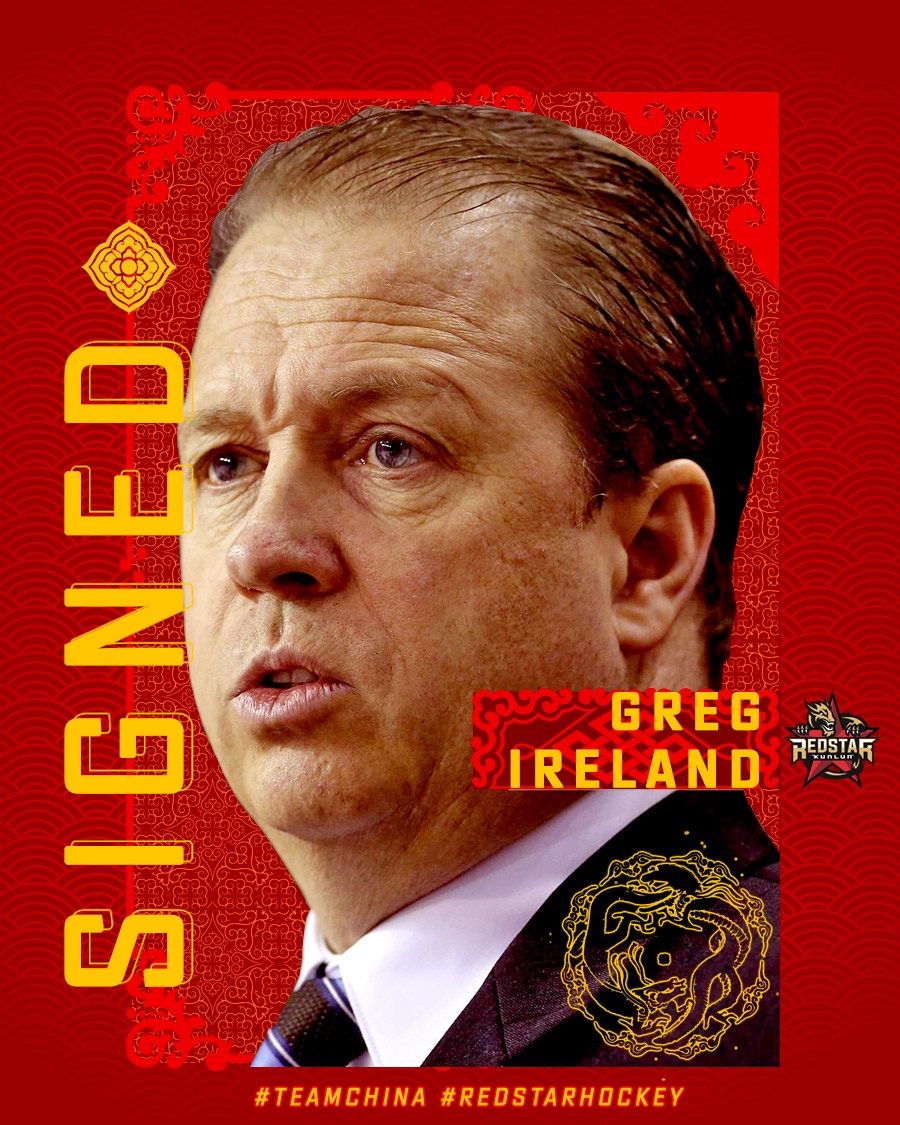 There’s been plenty of trade activity in Russia’s capital over the last week. CSKA announced the return of forward Maxim Mamin, who spent last season in North America. He had 14 (7+7) points in 44 NHL games with Florida. In the KHL he has 133 (59+74) points in 338 games for CSKA and signed a three-year deal with his old club. In addition, the defending champion added Swedish defenseman Fredrik Claesson. The 29-year-old was used sparingly in Tampa Bay last season, but wore the ‘A’ for the team’s AHL affiliate in Syracuse. A solid, stay-at-home D-man, he has 170 NHL games over seven seasons spent largely on the bubble.

Across town, Dynamo confirmed the return of Canadian forward Eric O’Dell, who had 40 (15+25) points in 54 games last season and represented Team Canada at the Olympics and the World Championship.

O’Dell’s Olympic team-mate Josh Ho-Sang is also KHL-bound, but the 26-year-old Toronto native is joining Salavat Yulaev on a one-year term. The 2014 first-round draft pick struggled to establish himself in the big league but enjoyed a solid campaign in the AHL with Toronto and had three assists in five games in Beijing.

Barys announced the arrival of American forward Anthony Louis on a one-year deal. The 27-year-old has 183 points from 302 games in the AHL and owns World U18 gold and silver medals plus an NCAA title. The coming campaign will be his first outside of North America. Last season he had 55 (24+31) points in 68 games with Texas Stars. Another import, Linden Vey, confirmed his return to Kazakhstan for the 2022-2023 season. He first played for the club in 2017-2018 and returned at the back end of last season after leaving SKA.

This is the season when Avangard comes home. The Hawks are almost ready to move into their new nest in Omsk, with the purpose-built arena set to stage its first KHL game on Oct. 1 against Siberian rival Sibir. A four-year wait has only sharpened the local appetite for hockey, however, as evidenced by a bumper crowd for Avangard’s first pre-season practice on Friday. Incoming head coach Dmitry Ryabykin acknowledged the importance of that hometown support in the battles to come: “The season will pose challenges with more travel. I hope that our fans will give us a stimulus, additional strength. I don’t think our game needs to change compared with [former coach Bob] Hartley’s systems – as long as it gets results, we’ll persevere with it.”

However, Ryabykin added that he expects to deploy three offensive lines next season, augmented by a checking line intended to blunt the opposition’s strongest strike force. “I believe that it’s much easier to win with three attacking lines, than with 2+2,” he added.