KHL.ru reviews the 2021-2022 season for each of the 24 league’s teams. Today it’s Lokomotiv’s turn. In September, the Railwaymen were considered among the contenders in the Western Conference, but the season showed that strong summer moves won’t guarantee postseason success.

Yaroslavl fans must have been rubbing their hands in the offseason, though: they managed to sign Maxim Shalunov off CSKA, bring back Alexander Yelesin from North America, and barter top sniper Reid Boucher from Avangard. All of them, however, can’t call the season a success: The first one missed a lot because of injuries and scored fewer than 25 points in the regular season for the first time in seven years, the second had the worst differential among defensemen (minus-8), and the third one got in a nasty mess. As a result, Lokomotiv, predicted by KHL.ru to contend for the conference’s top-3, fell short, finishing sixth in the West and missing the first round of the Gagarin Cup (0-4 in the series with CSKA).

The team got off to a rocky start – just three wins in nine games cost Andrei Skabelka his coaching job. He was succeeded by Igor Nikitin and that “shock therapy” transformed the team: Eight wins in the next ten games. The team still lacked consistency in its results, however, which was the primary reason for their underperformance in the regular season: Yaroslavl achieved victories against SKA, Dynamo Moscow, Metallurg, and CSKA, while losing to Neftekhimik, Admiral, Torpedo, and Amur. The team still managed to jump into the playoffs, but their low seeding determined their opponent to be the future champion. All Lokomotiv could do was drag two games into OT, but no more than that.

Lokomotiv’s defensive leader scored 27 points for the second season in a row, repeating his personal best performance. He played an average of more than 20 minutes per night and had a very good stat line for a defenseman, finishing third on the team for scoring.

Alexeyev was the Railwaymen’s top scorer for the season, although his numbers were worse than his own in the last two years as he almost reached 40 points both times. Nevertheless, he looked good both offensively and defensively, was the best on the faceoff dots (56%) and showed excellent shot execution (he led the team with 13.9% shooting percentage).

The return of the veteran in October 2021 strengthened Lokomotiv’s already serious central axis. He joined the team perfectly, started scoring goals and distributing assists right away, and at the end of the regular season he had a four-game scoring streak in which he scored 7 (4+3) points.

At the end of September, Igor Nikitin, the coach who led CSKA to the Gagarin Cup, took over Lokomotiv. He managed to reanimate the team, but he lacked time to build it up. Now Nikitin has a good reinforcement and full preseason preparation, perhaps the sum of all these factors will allow the fans to see a new and better Lokomotiv in the new season. 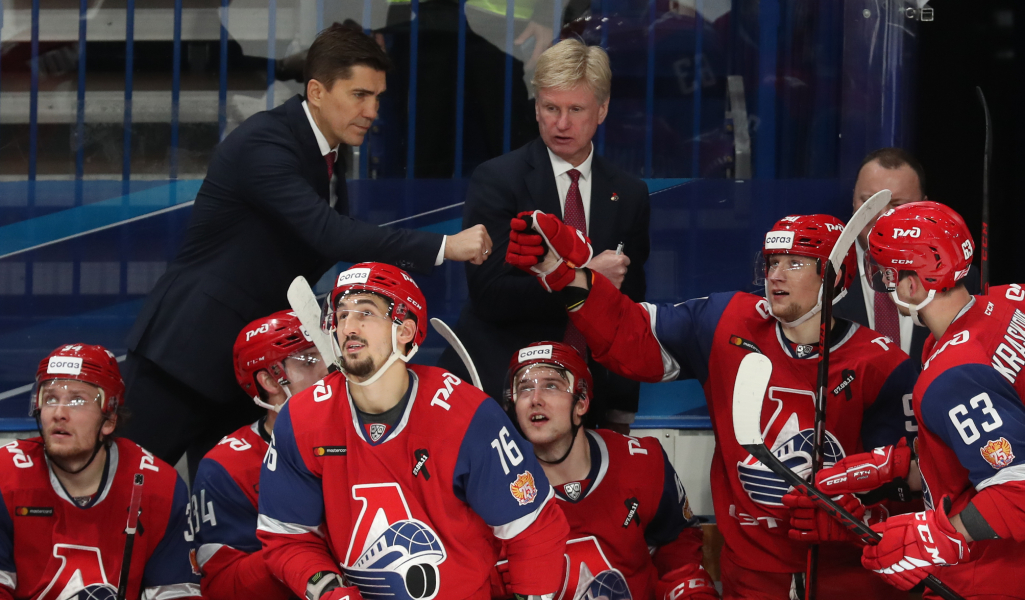 Nikitin faced his former team twice in the regular season, and the game in Yaroslavl was especially fiery. The home team scored twice after conceding a goal and snatched victory in OT with 38 seconds left in the game. Marchenko was the hero of the game, tying the game and assisting the game-winning tally.

In the 2021-2022 season, 11 hockey players under the age of 23 hit the ice for Lokomotiv. Seven of them played fewer than six games each, and another four played consistently. Ed Pasquale’s backup was Daniil Isayev who played 11 games, achieving three wins stopping the 91.8% and recording a goals-against average of 2.16. Daniil Misyul had 44 games, a goal and two assist, and a minus-3 differential. Daniil Tesanov played 15 games, three of which were in the playoffs. Maxim Beryozkin had his debut goal at the KHL level, playing 31 games.

For the second year in a row, the Railwaymen have been very effective on the transfer market: Sergei Andronov, Ivan Chekhovich, Andrei Sergeyev and Ivan Bocharov were added to the lineup, while Roman Bychkov returned from his loan at Amur. The first is a proven veteran with plenty of cup experience, Chekhovich has a sniper’s skills, Sergeyev and Bocharov should be more reliable options on defense and between the piping, respectively.

The departure of Pasquale – the best goalie of the 2020-2021 season should be taken into account, but in Yaroslavl, he played below his level and left the city for Magnitogorsk. Also in the Urals, but in Yekaterinburg, moved Denis Barantsev. Pavel Kudryavtsev, instead, will play for Dynamo Moscow.