KHL.ru continues its review of the 2021-2022 season. Neftekhimik went with a rookie head coach, who took his team to the playoffs at the first time of asking. In post season, despite being a big underdog, they asked some questions of one of the favorites.

In the end-of-season standings, Neftekhimik ranked 15th out of 24 – a midtable result, and closer to the lower half than the summit. Even so, this wasn’t a bad year for Nizhnekamsk. In terms of intangibles like entertaining hockey and commitment, and also according to the stats, the team did well, finishing ahead of the likes of Torpedo, Barys and Avtomobilist, all of which had better-looking rosters on paper.

At the start of the playoffs, Neftekhimik encountered one of the favorites to compete for the Gagarin Cup, Traktor. The scoreline might suggest that the Eastern Conference leader eased through the series, but that would be deceptive. Each of Traktor’s wins was by a single goal and three of them involved coming from behind – once in game three, twice in game four and three times in game one. That could prompt the question “what was Neftekhimik missing?”, but it might be more appropriate to ask “what made the difference for Traktor?” The answer was straightforward: class and experience. Traktor deservedly won the series, but Neftekhimik was a more than worthy opponent.

Khairullin enjoyed the best season of his career, producing more goals and assists than ever before. And there’s every likelihood of Marat boosting his numbers further in future. At the age of 25, Khairullin is emerging as a natural leader, deserving on the captaincy. And his call-up to the national team shows that he can play a big role alongside more illustrious team-mates.

Klok tied with Khairullin as Neftekhimik’s top scorer. One of Klok’s most memorable moments was his goal 30 seconds from the hooter to send the third game of the series against Traktor into overtime. And it wasn’t all about the Czech’s offensive contribution: at the other end, Lukas blocked 108 shots – the second highest in the league.

Knot wasn’t as productive as Klok, but he was no less valuable for the team. Second only to his countryman in game time (21:40 on average), he was on the ice for 35 of Neftekhimik’s goals at equal strength. That helped Ronald become one of just six players who finished the season with a positive rating (both Khairullin and Klok had a negative plus/minus).

This was Oleg Leontiev’s first season as a head coach in the KHL and his rookie campaign went well. It’s no secret that the key to success for any team that lacks a stellar roster lies in commitment. Often, that begins at the blue line – disrupt the opposition rather than create a game of your own. However, Leontiev managed to build a gameplan that combined hard work with more than just a counter-attacking style; his team looked to control the puck and put pressure on the opposition’s net. That strategy saw Neftekhimik win more than 50% of the available points. It’s possible that a more defensive approach would have harvested more wins, but it would have made the team far less entertaining to watch. 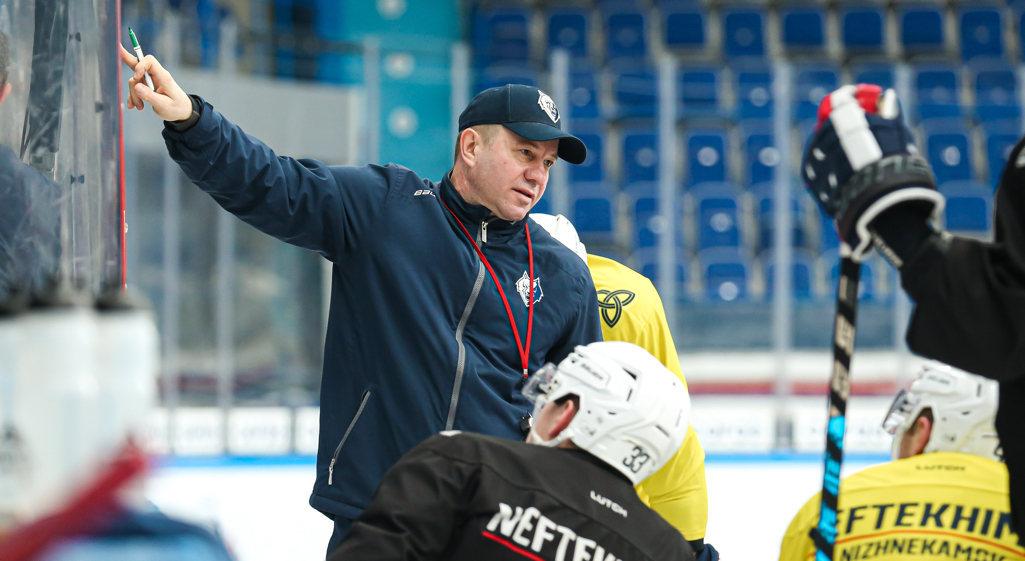 During the season, Neftekhimik defeated Jokerit twice – 4-2 at home and 6-3 on the road. The team arrived in Finland on a five-game skid and faced an opponent that had recently won 11 in a row. On paper, there was only one winner, yet the reality was very different. This threatened to be a thrashing for Jokerit – at the start of the third period, Neftekhimik was up 5-1. In the closing stages, the Finns managed to make the scoreline more respectable, but this was very much Khairullin’s day as the captain finished with four points.

Forwards Bulat Shafigullin and Andrei Chivilyov – both 22 – established themselves in the first team. Both had more than 14 minutes each night, with Shafigullin’s 16:51 placing him third among Neftekhimik’s forwards. Bulat’s 108 shots was second only to Khairullin and he earned more penalties (16) than any other. Chivilyov played and scored on both power play and penalty kill, as well as at even strength. He’s also not afraid of confrontation – his 81 hits were second on the team.

The loss of captain Khairullin, clearly the team’s strongest player, looks close to irreplaceable. It’s hard to find players of that caliber on the market, especially given Neftekhimik’s modest budget. However, it’s not a disaster. Most of Neftekhimik’s forwards are aged around 25, the age at which Marat had his break-out season; now somebody else can follow suit. In addition to the emerging youngsters on the team, there are promising reinforcements from Lada – Andrei Belozyorov and Mikhail Nazarov had 118 points between them in last year’s VHL. The ‘grandfather’ of the team will be Denis Parshin, who had more than a point a game in Slovakia last season.

Thus on offense, despite the departure of Khairullin, things are not as bad as they might seem. However, there is still work to be done at the back. So far, Neftekhimik has added goalie Alexei Murygin from Torpedo and loaned Vladislav Leontiev from Avtomobilist’s system.