Olympic excitement and a second title for KRS

The 2021-2022 Women’s Hockey League season was full of excitement — at both club and international level. While the Olympic Games dominated the global agenda, there was plenty to celebrate within the Russian championship, especially for KRS Vanke Rays.

Preparations for the 2021-2022 season were unusual. Back in the spring, both the WHL playoff final and the 2021 Women’s World Championship had to be postponed due to the pandemic. Both events were rescheduled for late August and early September, blurring the lines between the climax of last season and the start of this one.

The league’s international stars rushed back from Canada and, for Agidel and KRS Vanke Rays, arrival in Russia meant immediately jumping into playoff action. Agidel won the 2021 final in a shoot-out in the decisive game and, within a week, both clubs were in action again at the curtain-raising Opening Cup tournament in Sochi. There, the Vanke Rays came out on top against SKIF, Russia U18s, Agidel and a Chinese select roster.

There was big news for the WHL with the addition of two new clubs. In Chelyabinsk, the Beliye Medveditsy (Polar Bears) were formed under the aegis of the Traktor organisation, while Yaroslavl’s Ice Wings took the competition up to 10 teams. As a result, it was possible to expand the playoffs, with the top eight qualifying to contest three rounds in the postseason.

The schedule had to be divided in two due to the Winter Olympics in February. The Women’s Hockey League was destined to play a big role in preparing two national teams — Russia and China — for the Games, and stage one of the season ran from late September to early December to maximize the time available for our Olympic prospects to join their national teams.

Preparations for Beijing meant a big change in personnel at the Vanke Rays. In the first half of the season, our Chinese franchise opted to use a roster exclusively comprised of players eligible to represent the host nation at the Olympics. That saw many Chinese-born players looking for experience on Brian Idalski’s roster, alongside a selection of Chinese heritage players. The new-look Dragons remained competitive, but were not the all-conquering force seen in their previous two seasons.

At the top of the table, the race for the lead pitted Agidel against SKIF. The Ufa team was always expected to be up there. Studded with players from Russia’s national team, the defending champion has a deserved reputation as one of the country’s strongest teams. SKIF, meanwhile, is on an upswing. The Nizhny Novgorod club would go on to top the regular season standings, leading the pack for the first time since 2014.

At the other end of the table, the extra playoff places ensured every team had something to play for. Newcomer Beliye Medveditsy, Yekaterinburg-based SKSO and Moscow Region’s 7.62 were all battling to reach their first ever playoffs. Sadly, though, Ice Wings found the competition a bit too much and withdraw from the league during the winter break.

For the Russians, playing as Team ROC, Beijing was a tough tournament. COVID protocols wrecked the build-up to the tournament, with players forced into isolation and practices cancelled. Despite this, the opening game brought an impressive 5-2 victory over Switzerland with Polina Bolgareva getting a hat-trick.

Unfortunately, that was the highlight for the team Subsequent games brought defeats against the USA, Canada and Finland — plus an unexpected requirement to play in masks for the game against the Canadians — and the team’s medal hopes ended in a quarter-final loss against the Swiss.

There was better news for China. Back at the Olympics for the first time since 2010, the Dragons won plenty of plaudits and picked up wins against Denmark and Japan, the latter in a shoot-out. China was close to reaching the knock-out stage but lost out to Sweden in its final group game. Despite that disappointment, the Games did a great deal to raise the profile of women’s hockey in China and, hopefully, that legacy will continue long after the closing ceremony.

The final month of the regular season saw a big change in the battle for top spot. SKIF remained out in front, and eventually sealed its position with two games to spare. However, the Vanke Rays came roaring up the rankings, lifted by a long unbeaten run.

The Chinese team welcomed back many of its international stars, including Olympic bronze medallists Minttu Tuominen, Michelle Karvinen and Susanna Tapani from Finland. The ‘all-star’ roster clicked into gear impressively in the build-up to the playoffs and eventually beat Agidel to second place.

Beliye Medveditsy and 7.62 both secured playoff spots for the first time in their histories, while Tornado Dmitrov forward Anna Shokhina had a great season, leading the league in scoring with 83 (31+52) points from 34 games. 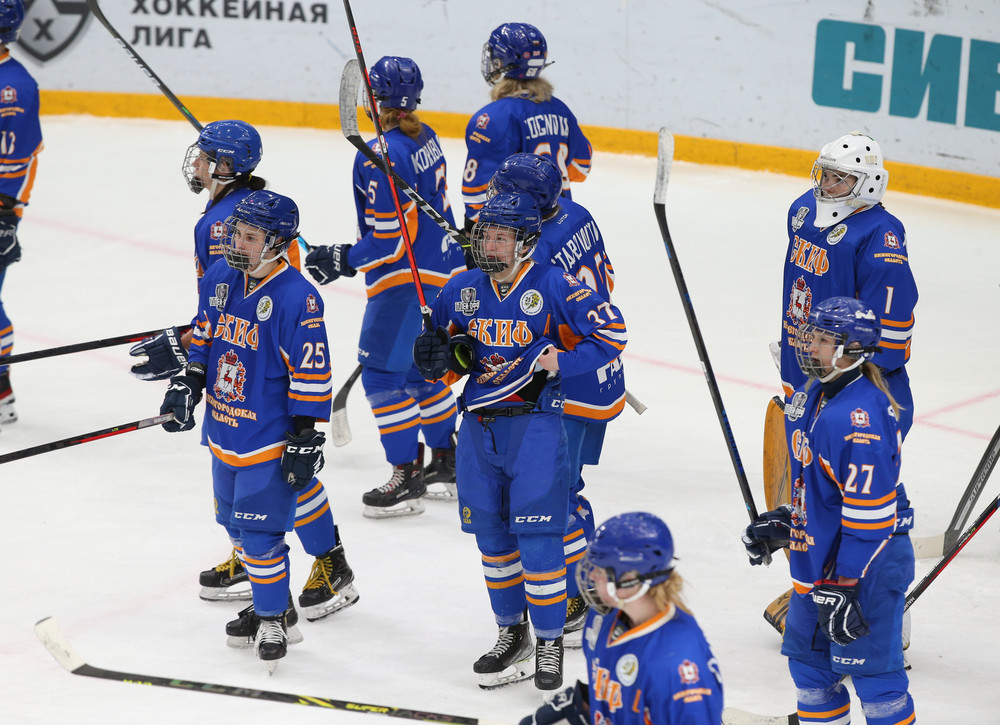 The first round of the playoffs delivered a sensation: defending champion Agidel was dumped out of the tournament by sixth-seeded Dynamo Neva. The Petersburg team, coached by Russia’s national team chief Evgeny Bobariko for much of the campaign, was always a dangerous opponent but lacked consistency in the regular season. In the playoffs, though, it pulled off a memorable success with two wins in Ufa to take the best-of-three first-round series.

The Biryusa — Tornado series also went against the form book, with Shokhina’s Tornado defeating its higher-ranked opponent from Krasnoyarsk. But there was no such trouble for the leaders, with SKIF and Vanke Rays easing through against Beliye Medveditsy and 7.62 respectively.

SKIF then got past Dynamo Neva in two games in its semi-final, albeit edging one-goal verdicts each time. KRS found things harder against Tornado. With many of its players on World Championship duty for China, the short-benched Dragons dropped the opening game of the series. However, as players returned from Poland, boosted by Division IB gold medals, the Vanke Rays turned it around to set up a hotly-anticipated first vs second match-up against SKIF.

That grand final proved closer than the 3-0 sweep might suggest. Although the Vanke Rays dominated the first game and won 3-1, it was very even from then on. In game two, SKIF led twice only to fall to Michela Cava’s goal on 58 minutes; KRS captain Alena Mills admitted that her team rode its luck in that game.

Then game three finished 1-1 thanks to superb goaltending from Noora Raty and Valeria Merkusheva. The only goals came from deflected shots as the netminders proved almost unbeatable. It went to a shoot-out, where Raty remained invincible as the Rays took the title for the second time in three years.

Cava finished as the leading playoff scorer with 17 (6+11) points and was named MVP. Idalski got the coach of the year award and the Vanke Rays now have two championships and a regular season title from their three seasons in the WHL to date. However, with SKIF looking stronger than ever, Agidel always a potent force and promising signs from the likes of Tornado, Dynamo Neva and Biryusa, the competition promises to be even more intense next season. Women’s pro hockey has a bright future, and it’s getting better all the time. 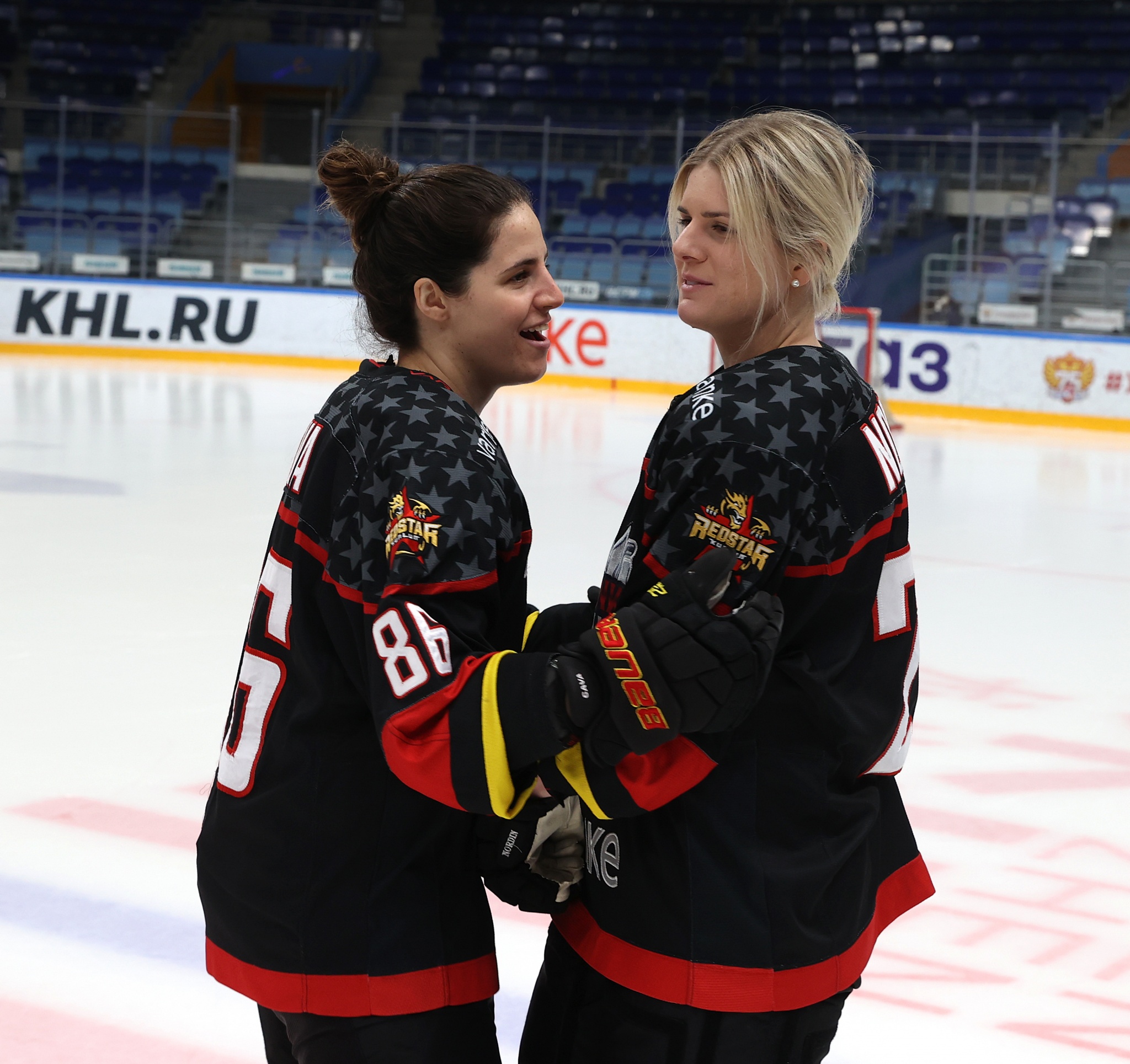